Fort Myers Miracle (Florida State League)
“Mighty Gonzalez” Keg Lift Record, May 1
By day, David Gonzalez is an unassuming Taco Bell employee. But in the
evening, he often morphs into his “Mighty Gonzalez” alter-ego. When
channeling “Mighty,” Gonzalez performs amazing feats of strength
throughout the Fort Myers area, where he has gained notoriety for his
ability to walk on glass and crush cinder blocks on his torso (don’t
try this at home, kids). At the Miracle’s Hammond Stadium, Mighty
Gonzalez will feed off the energy of an enthusiastic “Thirsty Thursday”
crowd as he attempts to break the Guinness Book of World Record for
full keg lifts. The current mark is 900 over a six-hour period, but
Gonzalez is seeking to accomplish the feat over the course of just nine
innings. I’ll be rooting for you, Mighty. You can do it.

So, the big question at this point is “Did Mighty set the record?” And the answer is…YES! Gary Sharp, the Miracle’s Promotions Director, was kind enough to provide me with the following information:

“[Gonzalez] did the full keg lift of 145 pounds 983 times. He dislocated his shoulder on lift 942 so the final 40+ were difficult. We had a great crowd watching him and I had him save the record breaker of 973 during a between-innings contest. Guinness Book of World Records has to go through the confirmation process, but according to us and him it’s a world record.”

Here’s a photo of Mighty in action: 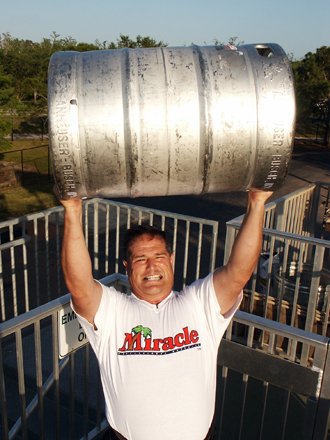 And here’s another one:

Mighty’s the man! According to my calculations, he lifted a total of 142,535 pounds over the course of the evening. That’s over 15,000 gallons of beer!