Never let it be said that the Trenton Thunder don’t care about professional basketball fans of the Pacific Northwest. Because they do. Clearly, they do.

As many of my readers are no doubt aware, the NBA’s Seattle Supersonics franchise is relocating to Oklahoma City for the 2008-09 season. And with the move comes a new name: the Oklahoma City Thunder.

That’s all it took for the great minds of the Trenton Thunder front office staff to swing into action:

“The Trenton Thunder are now offering a complimentary ticket to any
Seattle Supersonic fan. 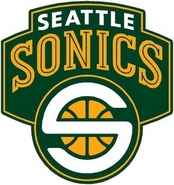 To receive a free ticket, fans must stop by the
box office at Waterfront Park and be wearing their Seattle Supersonic
hat, jersey, t-shirt or other merchandise. Each Seattle fan will
receive one free ticket based on availability.

‘We just want to help ease the pain for Sonics fans worldwide and offer
them a night of fun with the Thunder here in Trenton,’ said Thunder
General Manager Brad Taylor. ‘We can’t blame Oklahoma City for choosing
the best nickname in all of sports and certainly wish them well.'”

The Thunder win some creativity points here, but I’m not really sure how these Sonics fans will have their pain eased by watching another team named “The Thunder.” Wouldn’t this be the exact sort of thing these fans would wish to avoid?

After all, if your girlfriend ran off with a guy named “Joe”, you wouldn’t go to “Joe’s Pub” to drown your sorrows, or try to distract yourself by watching the 1996 serio-comedy classic “Joe’s Apartment“. No! You’d avoid all Joe-related cultural ephemera like the plague. That’s what you’d do!

I think it would make more sense if the Thunder offered ticket discounts to everyone with Oklahoma drivers licenses, and/or to fans wearing the apparel of Oklahoma City sports teams. After all, it is these individuals who will be most receptive to watching the Trenton Thunder as they prepare for the inaugural season of a Thunder of their very own.

Perhaps I am mistaken in these views. If any of my usually non-commenting cadre of loyal readers would like to weigh in with their opinions, I would very much like to hear them.

And, regardless, kudos to the Thunder for a creative, attention-grabbing promo.