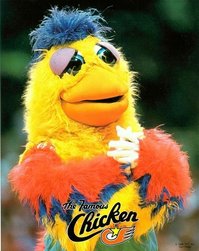 Thanksgiving is barreling toward us like a 16-wheeler with defective brakes, so it is understandable that most people have turkey on the brain right now.

Most, but not all.

The Altoona Curve are currently preoccupied with chickens, as a result of having booked the most famous chicken of them all: The Famous Chicken, who is making his first-ever appearance at Blair County Ballpark on April 9. To celebrate the impending arrival of this well-known costumed fowl, who is famous, the team announced that they will be selling the “Chicken Ticket Plan.” Read all about it HERE.

— And since I am on the always-riveting topic of ticket plans, I may as well take this opportunity to mention the Wisconsin Timber Rattlers’ latest offer — Fans who purchase an eight pack of ticket vouchers get to choose one of the following four bobbleheads (all of which are part of the club’s “Rehab” series). This is the type of decision that can lead to mental paralysis:

I’d choose Dave Bush. It is always my goal to live as simply as possible, and his name has the least letters.

Finally, I’d like to note that the Reno Aces are getting a jump on the Holiday shopping season by offering a “doorbuster” sale in the early morning hours of so-called “Black Friday.” Fans who show up between the unorthodox shopping hours of 12-2 am will be privy to a variety of exclusive deals, ones that will not be made available to those who opt to sleep. This brings to mind a little saying I heard once — “You snooze, you lose.” I think Ben Franklin said that. It was either him, Herodotus, or Ted Nugent.