News is scarce these days, but by using the foraging skills accumulated over a half decade in the Minor League wilderness I’m able to scavenge enough to get by.

Let’s start with a new logo, although “new” might be an overstatement. “Modified” is more like it, and the modifiers in question are the Pioneer League champion Helena Brewers. They went from this:

To, well, THIS. I’m working on obtaining a picture of the logo that can be posted here, but as for now none are to be found. But what you’ll notice, of course, is that the “B” has been eliminated. The wheat has been given a more functional task as well, transitioning from a decorative swath to the horizontal bridge between the vertical pillars of the “H”.

The Brewers aren’t going against the grain, in other words.

Writing as a means to stave off loneliness, I carry on — to trick or treating mascots! Last week I wrote about Boomer! being available for this crucial October 31st duty, but also up to the task is Buster of the Lakewood BlueClaws and Durham’s Wool E. Bull.

Buster’s Halloween services are being auctioned off via eBay, with the current high bid being $119.50. Seven days are left to bid, however, and I’m guessing that this will reach high six figures by the time it’s all over.

The Bulls are taking a different approach, as Wool E. Bull will “surprise” one lucky family on Halloween. To qualify, this family must subscribe to the Bulls e-newletter and have registered for the opportunity.

Finally, it is very much the season for stadium renovations. Two major projects are now occurring on opposite sides of the country, dealing with ballparks that are more than halfway to centenarian status.

Work on Tacoma’s Cheney Stadium is moving right along, and the team’s website offers a construction photo gallery and “construction cam“: 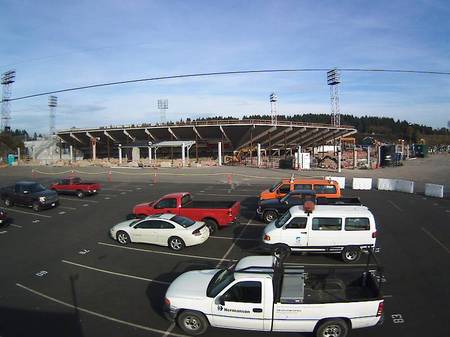 Much more info can be found in broadcaster Mike Curto’s latest blog post, where he reveals that his planned “press box destruction tail gate party” was curtailed by the Rainiers’ PCL championship run.

And then there’s Reading’s FirstEnergy Stadium, currently undergoing a $10 million dollar renovation. The latest video progress report, accompanied by a jaunty tune, can be viewed HERE.

Meanwhile, I’m currently soliciting funds for a $10 desk renovation project here at MiLB.com HQ. I need a Scotch tape dispenser and a new pair of scissors.