Maybe it was a sign from God. I was all set to do this post last night, but a mysterious note slipped under the hotel room door informed me that “due to an unexpected emergency,” there will be a “transformer replacement performed by Tucson Electric Power.” Thus, come 2 a.m., power would be lost and my wi-fi connection rendered useless.

You may have won that round, hotel general manager Helinda Lizarraga. But nothing can stop me from blogging. For yesterday I spent an action-packed day in Tucson, visiting Hi Corbett Field before taking in Thursday’s game at Kino Stadium. Please, by all means, read my story about the city’s professional baseball situation HERE.

It really is a tale of two ballparks here, and in a future post I’ll share some pictures of Hi Corbett. But for now, please enjoy this depiction of the Tucson Padres baseball experience.

Ticket prices are reasonable, as they are throughout Minor League Baseball. 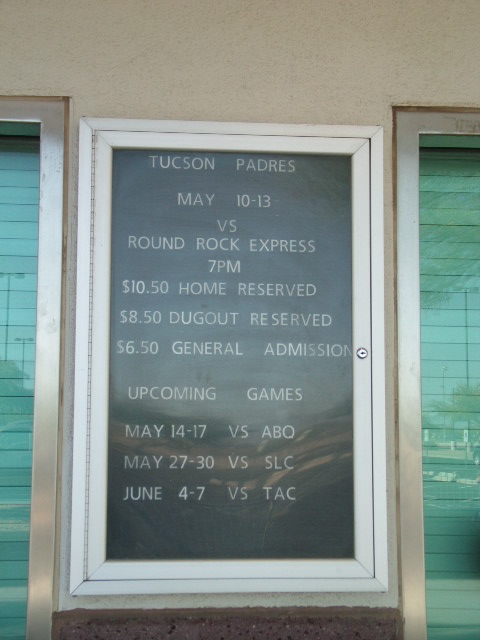 But, please, leave your guns at home. 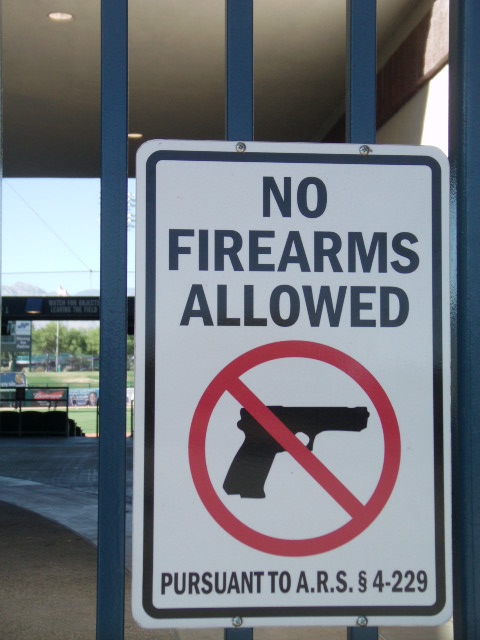 But there is plenty of parking for any and all fans arriving via mototcycle.

Yesterday’s ballgame was a Thirsty Thursday, and from the start there was a lively atmosphere that had largely been missing from Wednesday’s contest. 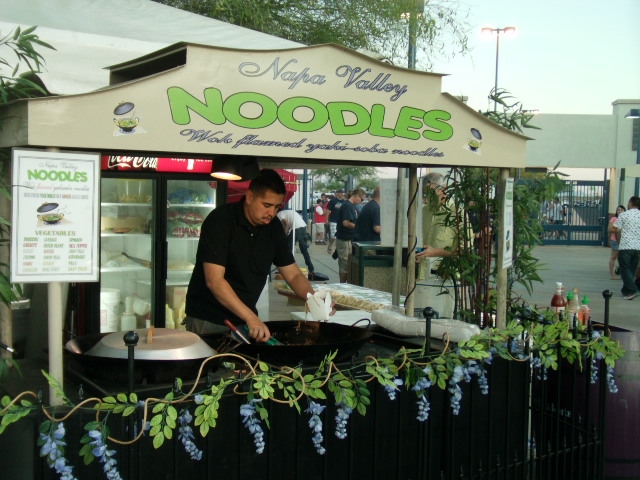 Eegee’s frozen fruit drinks are a Tucson favorite, and in the Thirsty Thursday spirit could be had for just $1.

The National Anthem was sung by Joint Venture, an acapella group composed of four elderly gents. 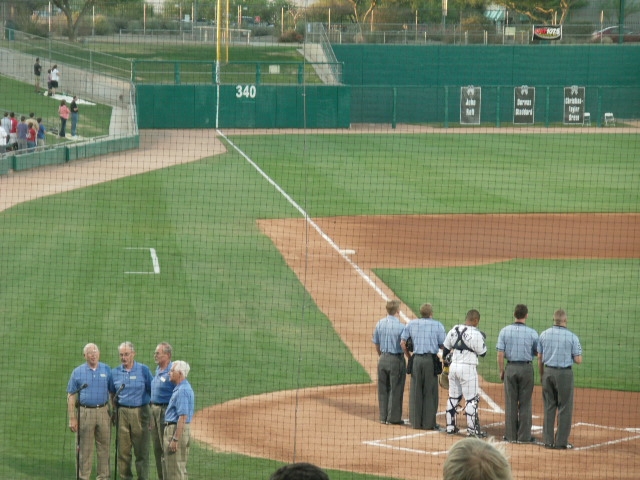 Trevor Hoffman was in town, along with Brad Ausmus and Mark Loretta, in a special advisory role. Hoffman threw out the first pitch (to the strains of “Hell’s Bells”, of course) and then watched the first few innings from the T-Pads dugout (third from left). I spoke with Hoffman later in the game, which should be available on MiLB.com shortly.

The T-Padres logo really seems to be catching on with the fan base, and those looking to exhibit their passion for the city’s newest professional baseball incarnation could do so here. 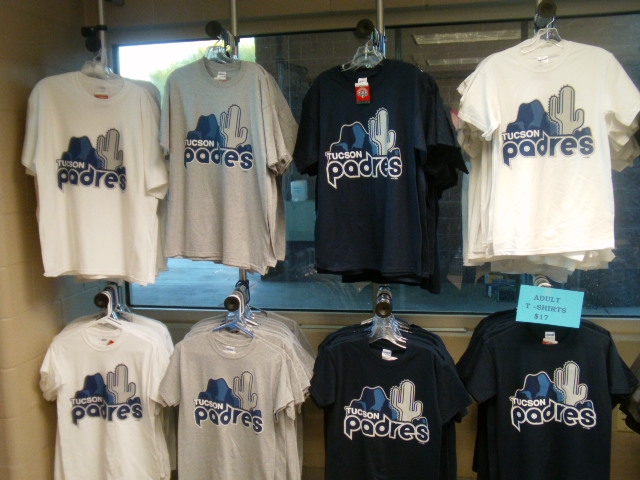 But as for the real “Kino Bambino,” he found himself upstaged by the Zooperstars throughout the evening (doing a surprise “sneak preview” performance in advance of their performance tonight). 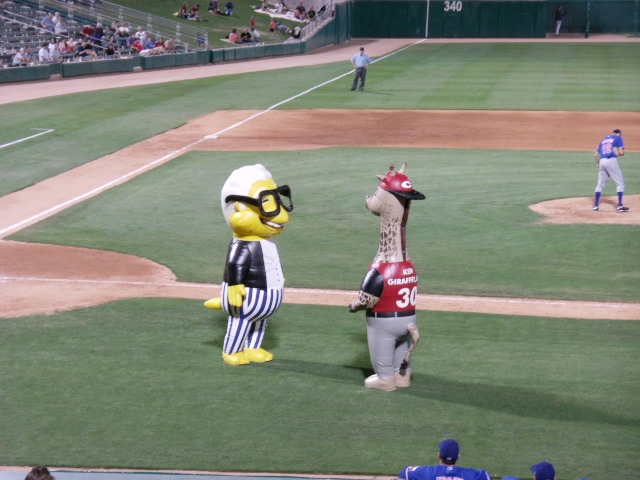 Momentarily an afterthought, Kino Bambino decided to check out the concession items. 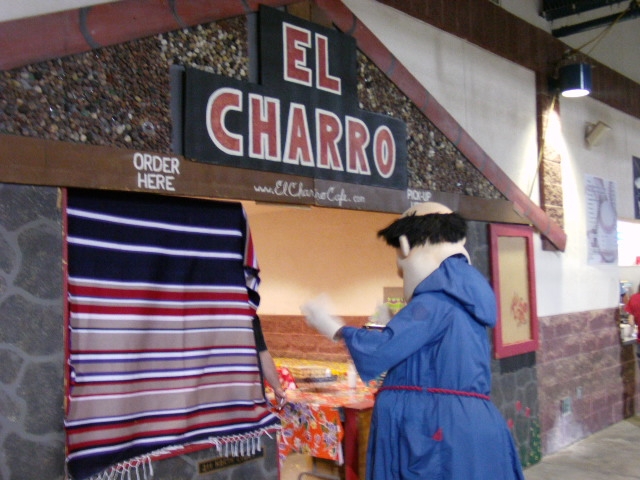 The views from afar:

In a nice touch, all six victims of Tucson’s recent shooting are memorialized in banners on the right and left field fences. 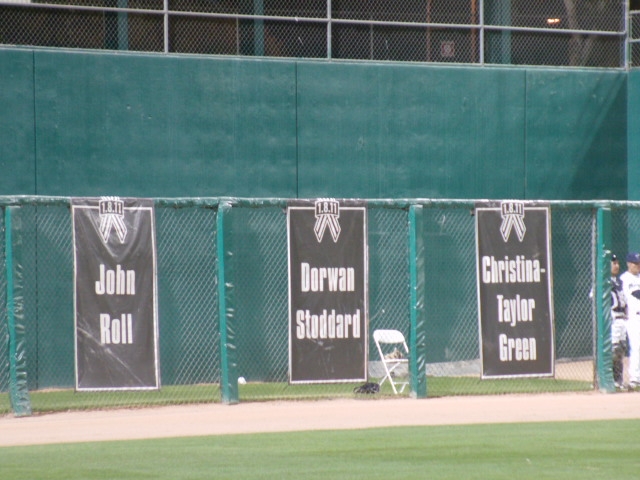 Kino offers plenty of room to wander, as evidenced by these two shots from Wednesday.

For more perspective, and to better contextualize tomorrow’s post on Hi Corbett, I once again bring your attention to my MILB.com story.

But, for now, the sun sets on Kino. 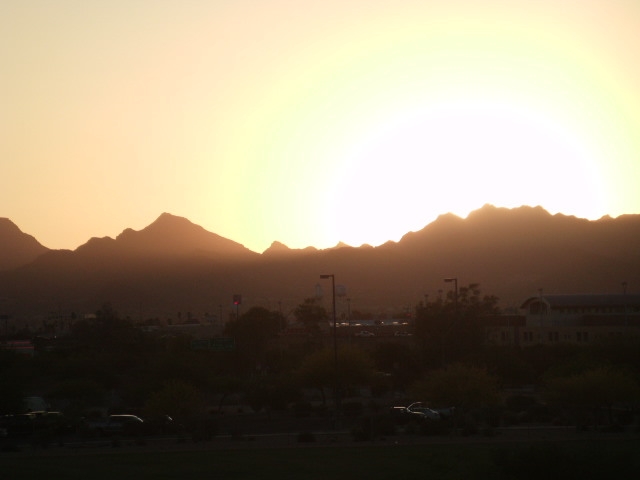