Last Friday I wrote a feature story on the new-for-2012 Pensacola Blue Wahoos, but the westernmost region of the Florida panhandle isn’t the only area in which affiliated ball will debut next season.

How about them Grand Junction Rockies? The team, located in Western Colorado, was officially introduced to the public at a press conference yesterday. The Rockies will play in the Pioneer League, as the Rookie-level affiliate of the (surprise!) Colorado Rockies. Read all about it in my MiLB.com piece.

And with a new team comes a new logo. Here it is, in all its parent-club referencing glory:

As noted in the MiLB.com piece, the key difference between this mark and that of the Colorado Rockies is that the mountain range has been replaced by a mesa. As I learned today, Grand Junction has more Mesas than Jose’s family reunion.

As a club that plays in Colorado and owned by the same folks that own the Colorado Rockies, it’s not surprising that Grand Junction is going the conservative route with its look. The same could not be said of the team that they are replacing: the Casper Ghosts. As you may recall, this was the only team in professional baseball whose primary logo glowed in the dark. 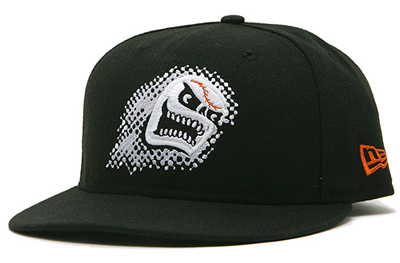 In glossing over the article I wrote when the Ghosts’ logo was unveiled on Halloween 2007, I came across the following quote from team CEO Kevin Haughian.

“I originally wanted to be the Casper Weinbergers, but we figured no one would get it.”

The Ghosts’ logo was designed by Plan B Branding, which, as of today, is no longer Plan B Branding. As detailed on this blog last week, the company unveiled its new name via a week-long internet scavenger hunt. And that new name is:

Logo fiends should enjoy poking around the new website, particularly the “Behind the Scenes” section. Said section is chock-a-block with info and photos regarding how many of the Minors’ top logos came to be.

The announcement of the “Brandiose” name comes exactly one year after another notable name change. For it was on November 15, 2010 that the Omaha Storm Chasers were introduced (themselves a Plan B/Brandiose client, natch).

The name was heavily criticized by those within the community and without, and my response to the criticism (specifically that of  then-ESPN columnist Rob Neyer) was the most widely-read and commented upon offseason blog post that I have ever wrote. Give it a (re)read, if you’re so inclined.