Throughout the offseason, I write a bi-weekly MiLB.com feature with the pithy yet altogether accurate title of “Minoring in Business.” As the name would imply, it focuses on recent news and innovations emanating from the nationwide industry that is Minor League Baseball.

The final 2011-12 edition (now up on MiLB.com) recaps the biggest news stories of the offseason, so that all interested parties are up to speed come Opening Day. In putting together said column, it occurred to me that I should post something similar here on the blog. A companion piece, if you will. So, without further ado, here’s a look at the 2011-12 Ben’s Biz Blog offseason that was.

Ben's Biz Blog: A year-round operation, haircut or no haircut

(The offseason is hereby defined as stretching from 9/22/11 to the present).

September/October: My offseason starts in Myrtle Beach, home of the 2011 Minor League Baseball Promotional Seminar. The Grounds Crew Gorilla wreaks havoc, boiled peanuts are procured, and Harry is mourned within his titular flapjack establishment…Unable to let the season go, I recap Fresno’s Taco Truck extravaganza and then move on to an obsessive look at my own culinary favorites (in two parts)…Still unable to say goodbye, I review the year’s best photos and then take a final look at 2011’s epic swag haul…One of the greatest scoops of my career debuts to no fanfare, as White Sox prospect Daniel Wagner tells the tale of how he was attacked by a bat in Kannapolis…The much-threatened “Introspective Mascot” post debuts, to somehow even less fanfare…After a heated, seemingly endless multi-round voting process, the inimitable “Dallas Braden Bobblebelly” wins MiLB.com’s vaunted “Promo of the Year” award…In the midst of Rally Squirrel mania, Nutzy of the Richmond Flying Squirrels capitalizes by taking an impromptu trip to St. Louis

Read all about it

November: Just after Halloween, the State College Spikes release a photograph depicting mascot Ike the Spike idly observing a werewolf being wheeled on a stretcher by a witch who appears to have Frankenstein in a headlock…I am the only one who seems to care about mysterious fish death in Beloit…Lehigh Valley co-opts a populist uprising for its own ends…An anomalous date on the calendar brings out teams’ inner Nilsson (or Three Dog Night)…The Grand Junction Rockies unveil their logo, Pizza Hut references ensue…With considerably more fanfare, the Pensacola Blue Wahoos unveil the logo aquatic…Like a bad relationship, memories of the 2011 season refuse to die.

December: For one blogger, attending the Winter Meetings triggers a profound existential crisis…In the midst of an uninspired run of Winter Meetings coverage, said blogger goes on a Dipquest…said blogger is me…Inspired by a presentation at the aforementioned Meetings,  I explore how teams can best market their history…Operation Shutdown precedes the holidays, but not before a post appears that includes Jeopardy!, Harry Potter, and the impending Double-A zombie apocalypse.

January: Taking advantage of the offseason doldrums, the first of an extensive ’87 Topps-themed series of blog posts appears. Response is robust, but a larger audience still desired…In the midst of enjoying the fruits of his labors while they’re still ripe, rapper Lil Wayne takes to the stage wearing an Omaha Storm Chasers hat (50 Cent, meanwhile, is an Idaho Falls kind of guy)…The Reading Phillies announce their All-Star Game Home Run Derby plans, which include an intern suspended from a crane in left field…Prior to the Oscars, Minor Leaguer-turned-thespian Casey Bond stops by for a chat.

Most of y'all don't get the picture 'less the flash is on.

February: Having reached brobdingnagian proportions, the ’87 Topps blog post series finally (mercifully?) comes to an end…Lonely hearts get noticed on Valentine’s Day, as I unwittingly start to repeat myself on the logo front…Before leaving for vacation, I am moved to post the lone MiLB mascot photo to have yet emerged from the Republican primary race…A nine-foot tall inflatable fish needs a name, for goodness sake…And, of course, THE MOST COMPREHENSIVE RECAP OF MINOR LEAGUE LEAP DAY PROMOTIONS EVER ASSEMBLED! 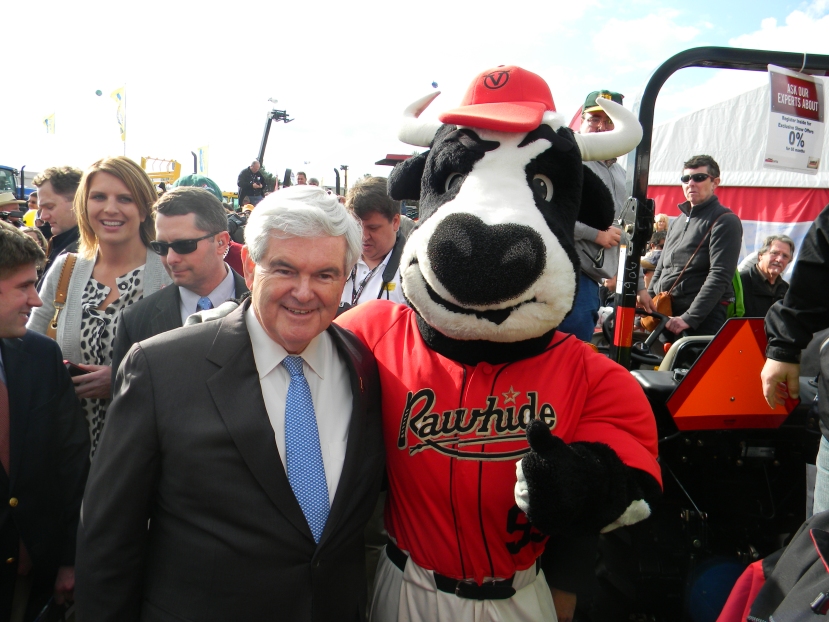 A load of bull, plus a mascot

March: Slowly, thoughts start to turn toward plans for the season…A request for new head shots is met with a deafening silence, serving as a reminder that we are born alone and blog alone…A new series of Friday giveaways begins on Twitter, doubling as an attempt to get rid of my stockpile of Minor League swag…Just when it seemed too late, a new team name is announced for the 2012 season…Kazoo reveals himself to be a real humdinger of a mascot…The Lake County Captains unveil the “Moby Dick,” which “uncomfortably feeds two.” Melville allusions abound…The Storm attempt to trade for Tim Tebow, resulting in scads of attention and, quite possibly, not much else…Duck, venison, and alligator at the ballpark? You better believe it!…The blogging month ends with a post detailing everything that had come before. Perhaps you already read it. 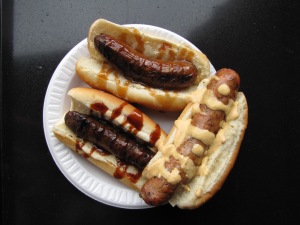 Duck, not duck, not goose