I won’t be content until I’ve posted all of my content, so here we go with another post full of Florida road trip odds and ends. The previous dispatch ended in Lakeland, and from there I drove northeast to beautiful Daytona Beach.

Drawbridge delays added a few minutes to my travel time, but I didn’t mind:

I was in town to see the Daytona Cubs, whose team hotel is the Acapulco. I’m going to go ahead and declare this to be the best view from a team hotel in all of Minor League Baseball. 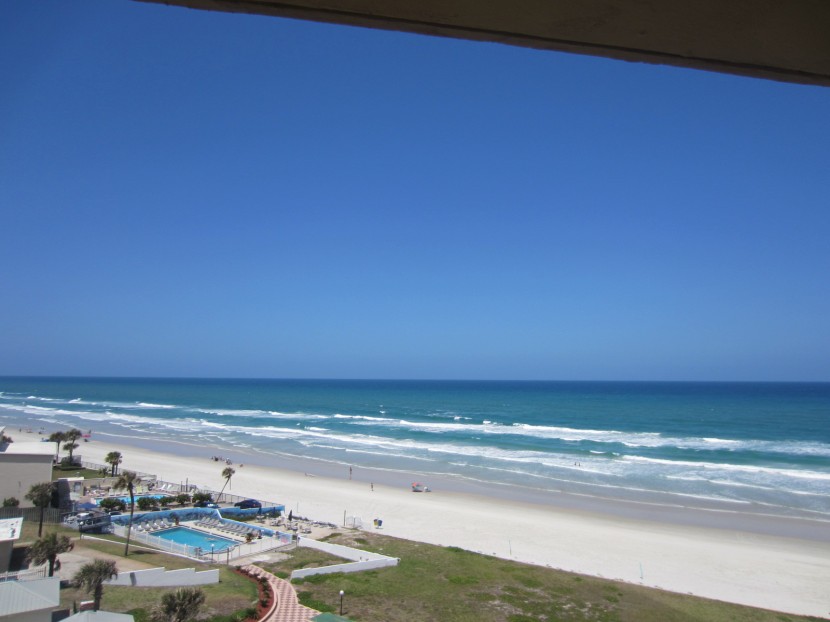 I rarely relax on these trips (or in life, come to think of it) but I did go for a swim shortly after checking in. How could I not? I did so with a full stomach, however, as on the way to the hotel I stopped for lunch at The Daytona Brickyard. It was recommended to me via a blog post comment: In Daytona you have to eat at a hole in the wall NASCAR Bar called The Brickyard. It’s right across the street from Bethune Cookman College. They have the best burgers you will ever eat in your life.

Well, okay then. Off to 747 w. International Speedway Boulevard I went:

I imagine that this place can get pretty packed in the evenings, but the mid-day atmosphere was fairly sedate.

The menu didn’t make any particular claim to burger supremacy, but when I asked the waitress she just said “We have the best burgers, that’s what we’re known for.”

So, of course, I got the burger. The photo doesn’t really do it justice, but it really was good. Maybe not “greatest of all time,” but far above average. Char-grilled and nicely seasoned is all I can think to say, once again I’m coming up blank in the food adjective department. (The fries were great too, but I made the mistake of sprinkling some salt on them before tasting. They were already very, very salty.)

A burger with a checkered past.

I attended that evening’s Daytona Cubs game (read all about it), but there was still a little bit more to come from Jackie Robinson Stadium. An “Education Day” game was scheduled for the following morning, so I stopped by before heading on my way toward Pensacola.

I neglected to feature this in my previous post on Daytona, but outside of the stadium there is a statue of Jackie Robinson. (Daytona hosted Jackie and his Montreal Royals during 1946 Spring Training, one year before his debut with the Brooklyn Dodgers.) 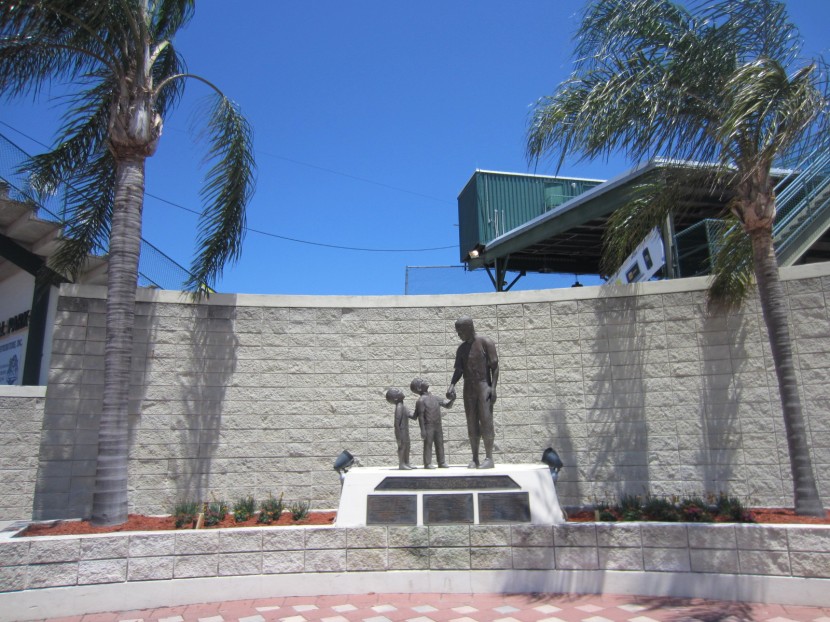 Inside the stadium, there were a lot of screaming kids. This is the defining characteristic of any “Education Day” ballgame. 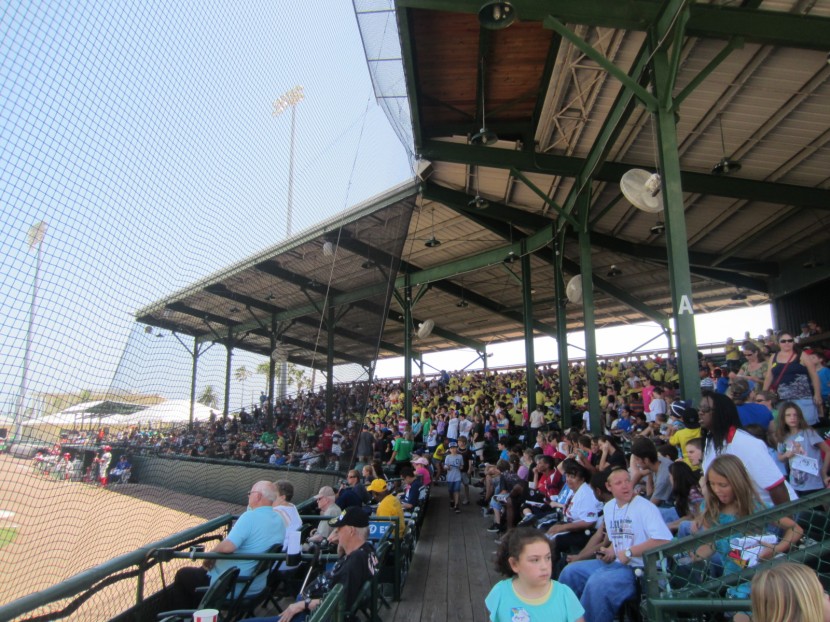 Elsewhere in the stadium, things were pretty sedate. 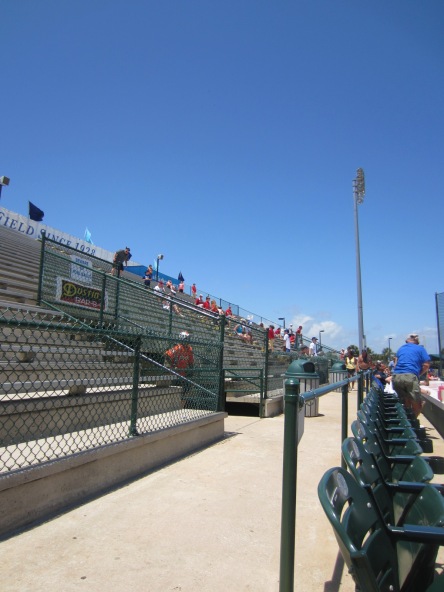 After the ballgame, I stopped by the Florida State League headquarters (located just beyond right field).

I had met league president Chuck Murphy the night before, and he told me that the offices were full of interesting (and idiosyncratic) baseball memorabilia. But, alas, no one was there. I’ll have to put a stop at FSL HQ on my to-do list for the next time I’m in Daytona.

And there will be a next time! But the rest of this day was budgeted for travel, as the next (and last) stop on my itinerary was faraway Pensacola. The drive started on 95, but brightly colored billboards advertising fresh citrus, pecans and fireworks soon caused me to make a slight detour. I absolutely love places like this: 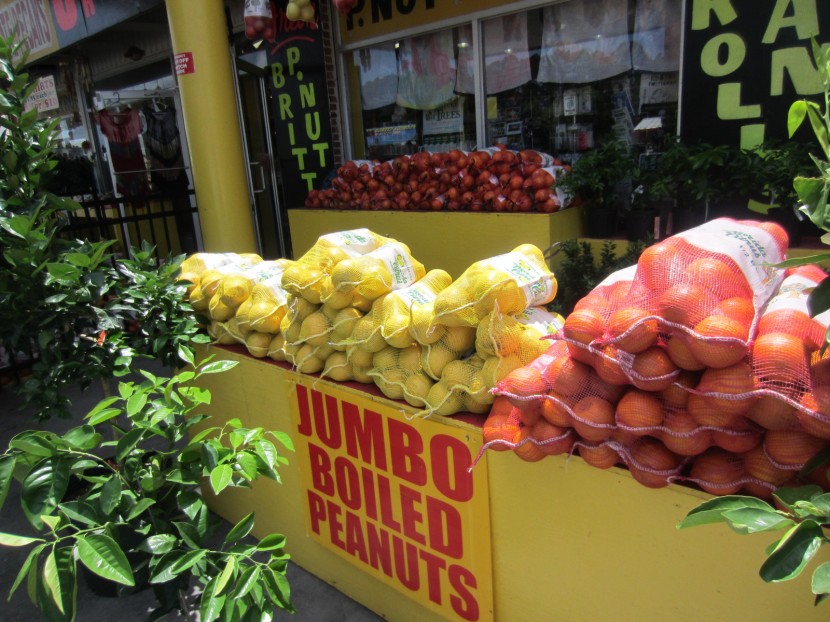 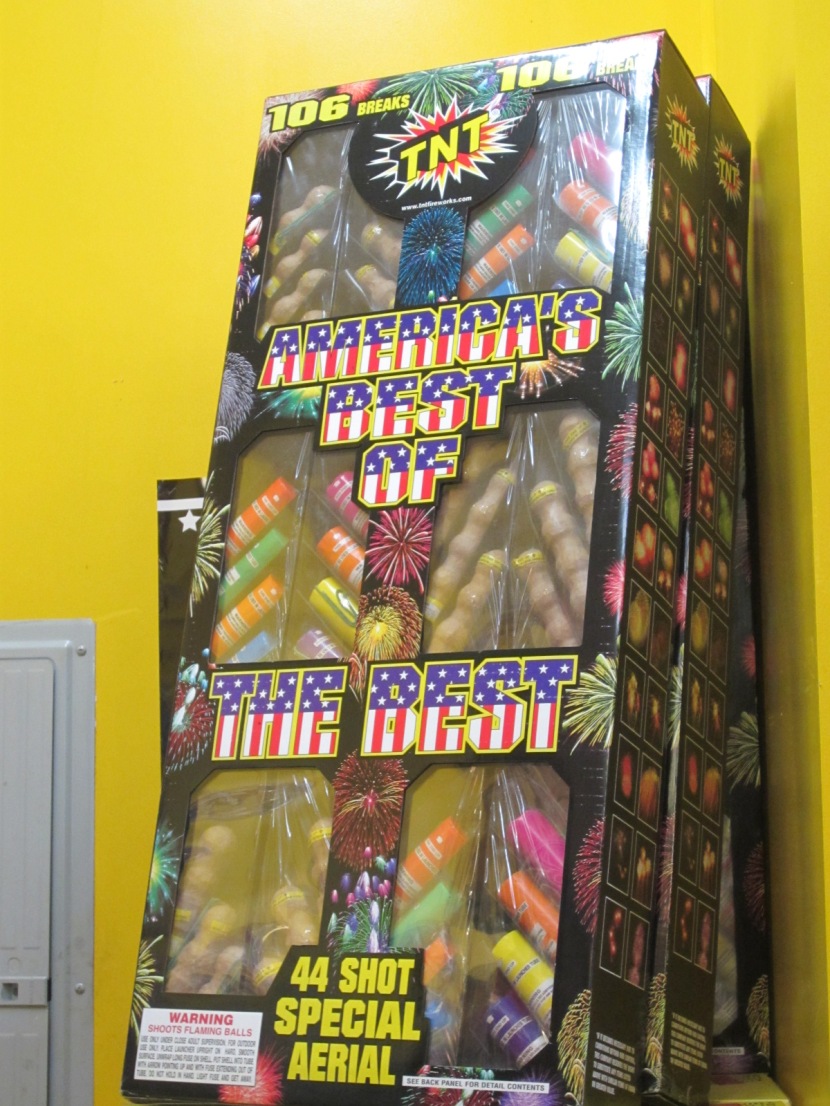 I ended up buying a bag of honey roasted pecans, boiled peanuts, and two grapefruit. Everything was awesome, but I was absolutely floored by how good the grapefruit was (as were as the oranges, of which free samples were provided). The guy working there explained that most grapefruits are picked before they are ripe so that they will not spoil. Therefore, they are not as flavorful as they otherwise could be.

I probably already knew this, but finally having a taste of the real thing hammered the point home. I will never eat a grapefruit here in the Northeast without thinking of how much better they are in Florida — so fresh, and tart, and juicy. The sort of thing that, yes, makes you grateful to be alive.

Alligator jerky didn’t necessarily make me glad to be alive, but it wasn’t so bad that I wished I was dead. It was thoroughly mediocre. 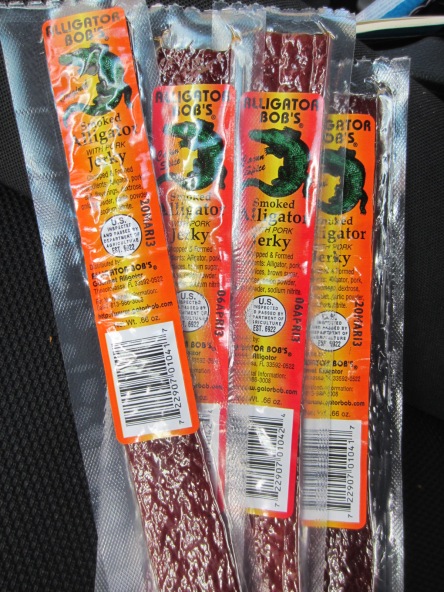 Did you guys hear the one about Shrek-brand jerky? The taste was thoroughly meaty ogre!

[Thanks, I’ll be in this deserted office all night. (Please, someone, give me a reason to leave).]

Several hours and several listens to the new Spiritualized album later, I noticed a decrepit billboard touting the fact that Greenville, Florida (population 837) is the birthplace of Ray Charles. Therefore, I decided to stop in Greenville. It was sleepy in the way that only the South seems to be sleepy; blanketed in soporific haze, the metronome moving in slow motion as the ghosts look on disinterestedly.

I think something was off with my camera. 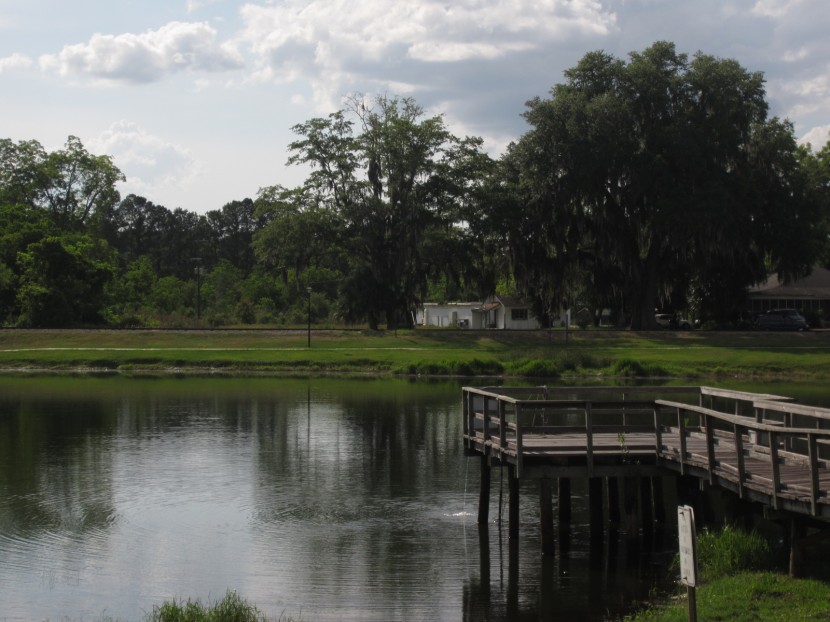 And, yes, there in the center of Haffye Hays Park (no relation to Soporific) was the Ray Charles Memorial. Again, I apologize for whatever snafu resulted in such low lighting.

That’s about it when it comes to interesting detours I made en route to Pensacola, but I do want to take this opportunity to express my admiration for Florida rest stops. They were clean, informative, well-designed, and the vending machines were stocked with regional potato chip brands. This one was my favorite:

The gas stations were all in order too, thanks to a department of agriculture and consumer services commissioner who won’t take guff from anyone.

I didn’t quite make it to Pensacola that evening, opting instead to spend the night in the DeFuniak Springs Super 8. There wasn’t much to do there, so I passed the time trying (and failing) to take poignant photographs of a nearby Waffle House. 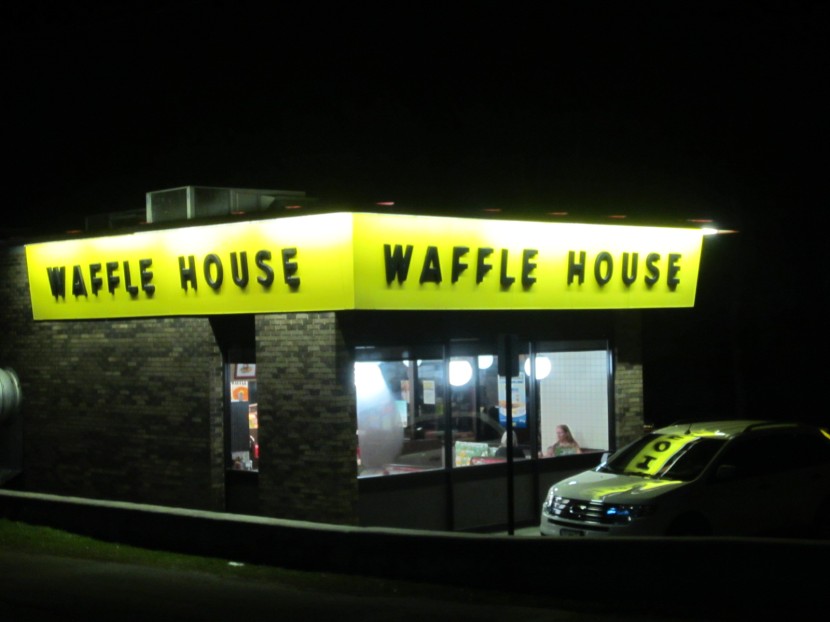 I swear that I’ll eventually run out of content from this trip. But it hasn’t happened yet!