The Pacific Northwest is a beautiful part of the country. So when I went on a road trip to that region at the end of the season, this was something that was written in all caps in my notebook to-do list: EXPERIENCE BEAUTY.

Of course, time is tight when I’m on the road and often the most beautiful thing I see over the course of a given 24-hour period is a particularly well-constructed plate of nachos. But this was most emphatically NOT the case on the third day of this Pacific Northwest road trip. The day began in Salem, Ore. at which point I had to drive about four and a half hours northwest to Yakima. And this drive, it was absolutely gorgeous!

I opted to travel along the Historic Columbia River Highway (scenery over expediency!), and shortly into the journey I arrived at Vista House. 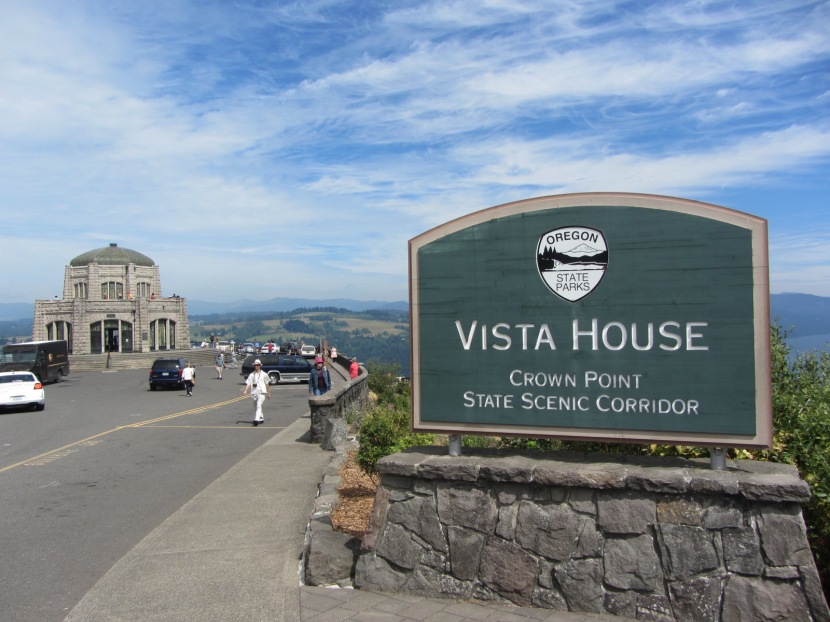 The Vista House was built in 1918, as both a rest stop and pioneer memorial. An informational plaque located outside of the building says that “Samuel C. Lancaster, design engineer of the Historic Columbia River Highway, envisioned this outcropping as the ideal site for a rest stop and observatory where the Gorge ‘could be viewed in silent communion with the infinite.'”

I realize that America in 1918 was far from an ideal society, but sentiments such as that are phenomenal and indicative of a spiritually-informed progressive public mindedness that seems to be in short supply here in the 21st century.

As for the building specifically, “[A]rchitect Edgar Lazarus designed Vista House to ‘recall the ancient and mystic Thor’s crown.’ Braced against the famous Gorge winds, this small building embodies strength.” (I would like to think that growing up amidst such scenery and sentiment is what inspires Oregon-based bands such as Yob to write such awesomely heavy songs.) 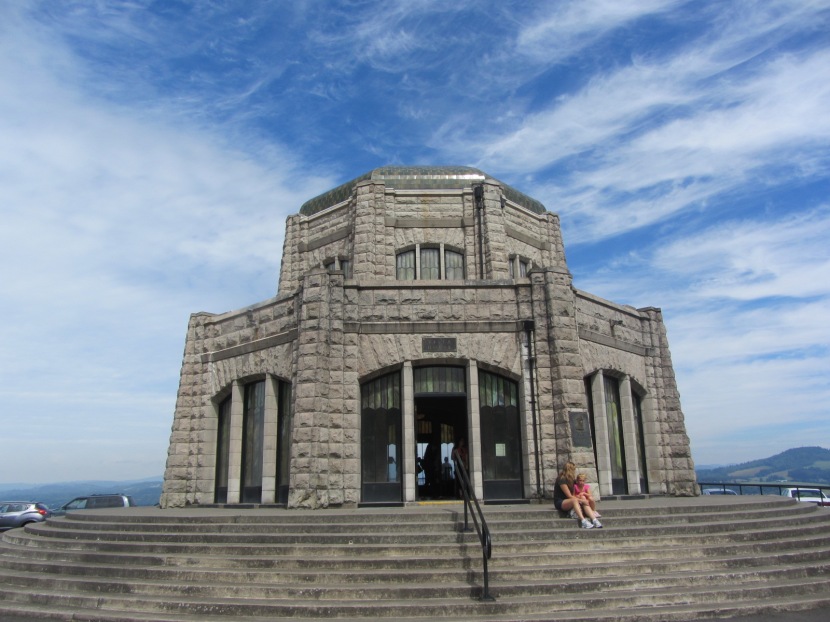 Exploration opportunities abounded along Scenic Route 30, and I took advantage to the extent that I was able. As a collector of Victorian-era bridal veils, I decided that a walk along Bridal Veil Falls Trail would be most apropos. 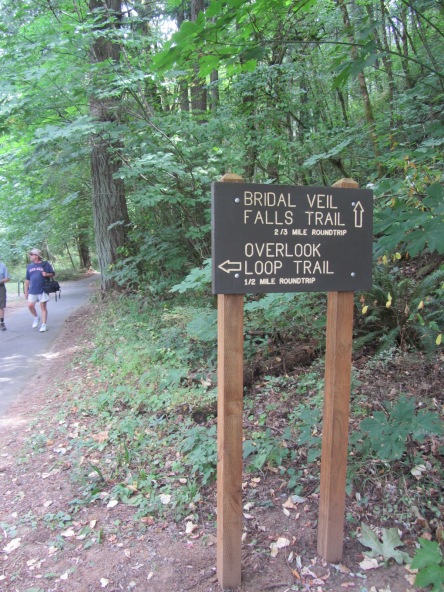 After a 2/3rds of a mile “journey,” I reached the titular attraction. 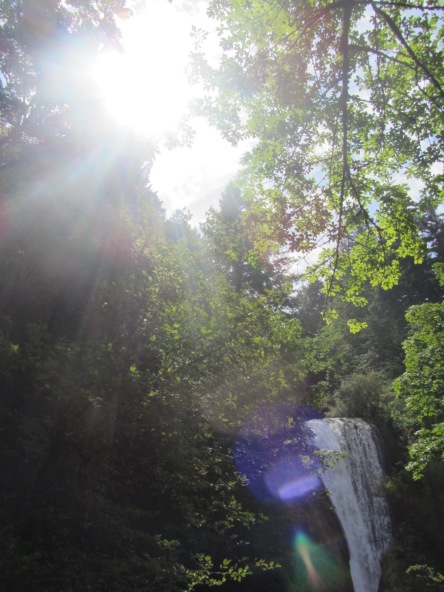 I was unprepared to do so, and therefore didn’t, but I really can’t think of a better place in which to go swimming.

Keep in mind that all of this is only about 25 miles outside of Portland! To be able to live in a vibrant urban area with such close proximity to nature would be truly phenomenal.

The next stop was Multnomah Falls, one of the most visually stunning, accessible and therefore best-known waterfalls in the state. 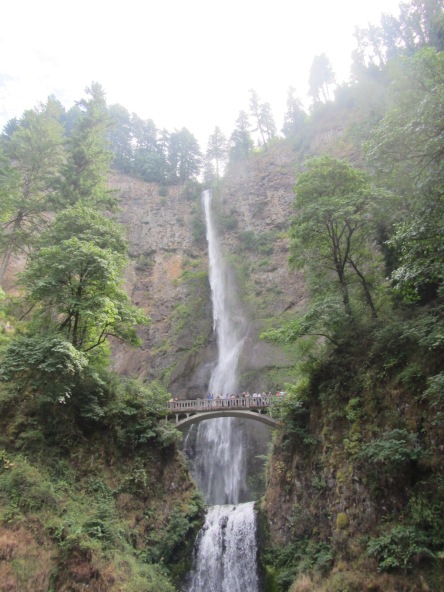 I guess it’s only natural that Multnomah would have a downfall, and that is that it’s almost too accessible. It was tough to find a parking spot at the visitor’s center, and the scenic bridge seen above was packed to the gills with camera-toting fools such as myself.

The view in the other direction: 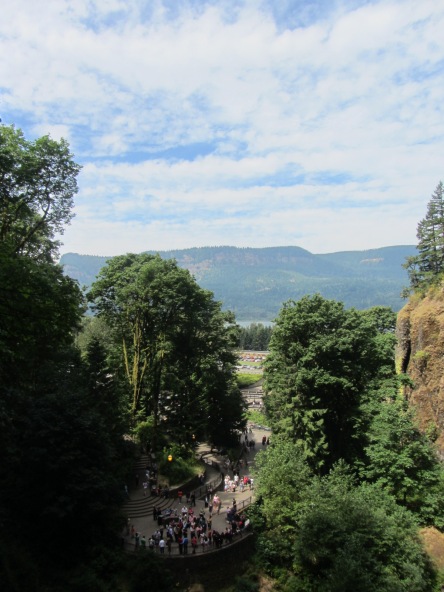 Back at the base of the falls, I had an appropriately outdoorsy lunch of smoked trout on (gluten-free!) almond crackers. 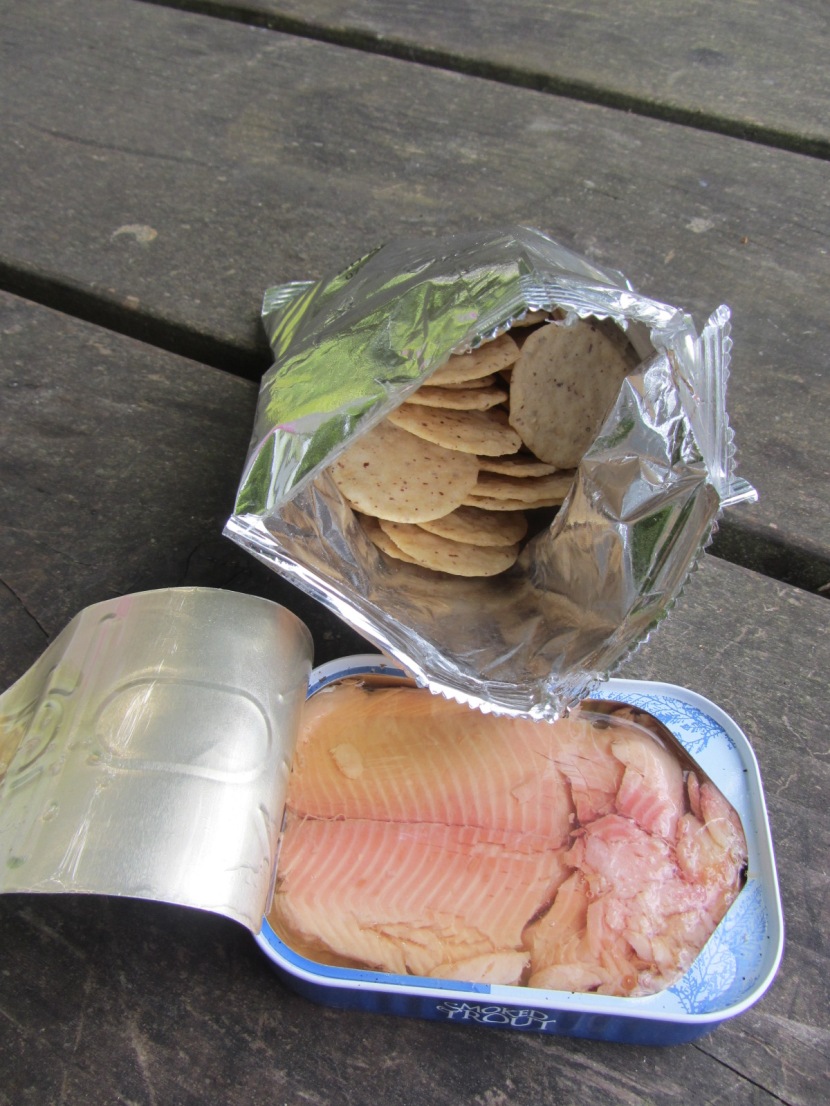 There was certainly much more to be seen and explored in the vicinity of Multnomah Falls, but time constraints (the bane of modern existence) were such that I cruised right on into the state of Washington — via the incredibly-named Bridge of the Gods. 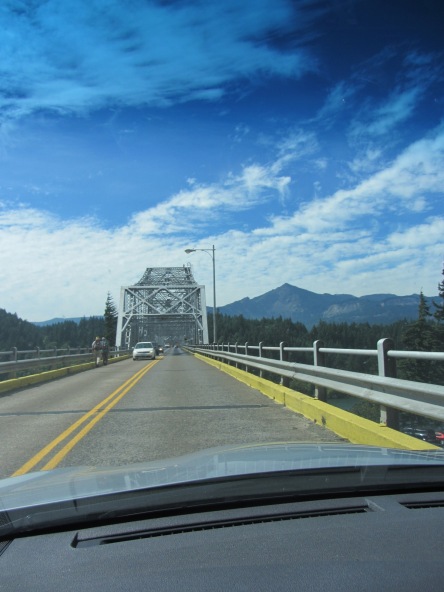 Wikipedia informs me (and, by extension, us) that the Bridge of the Gods was named after a “famous geologic event.” Okay, then, Wikipedia. You may as well fill us in on what that was all about:

The Bridge of the Gods was a natural dam created by the Bonneville Slide, a major landslide that dammed the Columbia River near present-day Cascade Locks, Oregon in the Pacific Northwest of the United States. The river eventually breached the bridge and washed much of it away, but the event is remembered in local legends of the Native Americans as the Bridge of the Gods.

As for the bridge itself (as in the bridge I was driving across, not the one of local legend), it provided great views but I didn’t really see any places to pull over. So I just snapped a few quick pictures as I drove across at a very low speed. 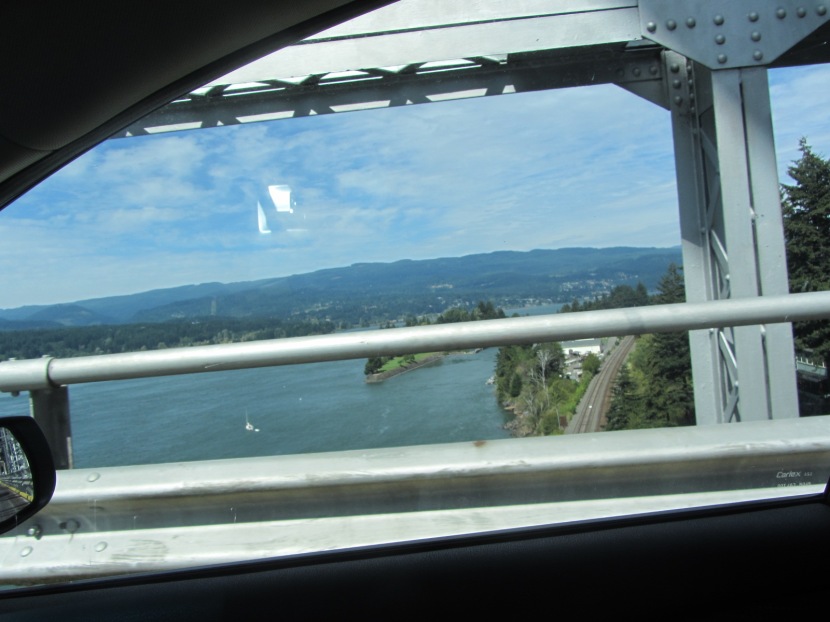 And then — bam! — Washington. The greenery was dense. 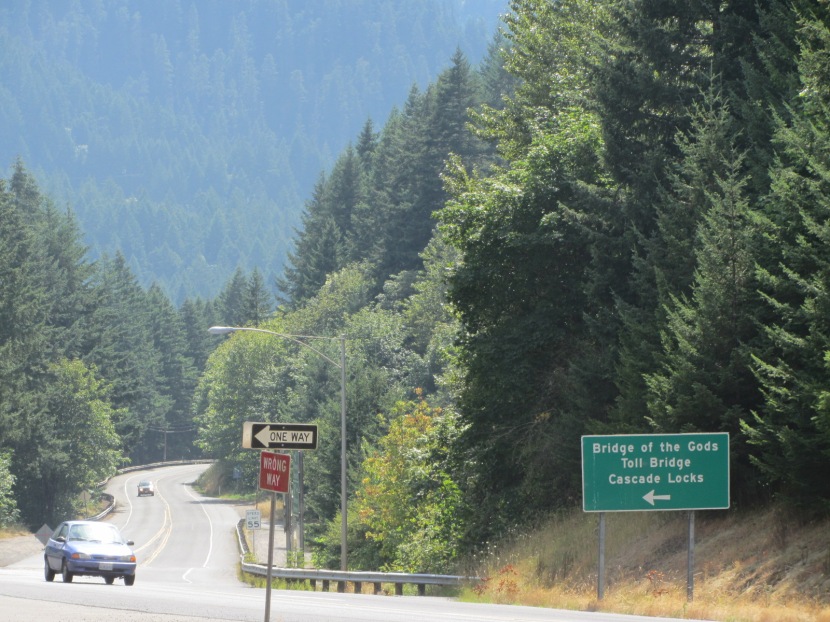 From here I got on the Lewis and Clark Highway, yet another incredibly scenic road that made me happy to be alive. Working my way eastward, the landscape gradually flattened out and took on a sunbaked and vaguely extra-terrestrial sort of hue.

The above photo was taken at the Maryhill Museum of Art, an unexpectedly expansive establishment.

But I was at the museum mistakenly. What I was looking for turned out to be just a bit up the road.

Called the “Stonehenge Memorial,” this structure was built by the pioneering Quaker entrepreneur Sam Hill. Why? The website of the Maryhill Museum of Art explains thusly:

During World War I, Hill delivered relief supplies to Belgium and Russia, and reinforced his interest in travel. While in England, he made his first trip to see Stonehenge on Salisbury Plain where he was told that the structure was believed to be constructed by Druids as a place of human sacrifice.

Hill concluded there was a similarity between the loss of life in this, the greatest of human wars, and the sacrifices of ancient Stonehenge and planned to build a replica of it on the cliffs of the Columbia as a reminder of those sacrifices and the “incredible folly” of the war.

The architecture and precise plan of the structure was guided by leading authorities on archaeology, astronomy, and engineering who combined their knowledge to duplicate, as nearly as possible, the original size and design of the ancient Neolithic ruin in England.

I think at this point I was almost numb to how beautiful everything was. What a country.

50 yards from his quixotic creation, one finds the tomb of Sam Hill. “Amid nature’s great unrest, he sought rest.” 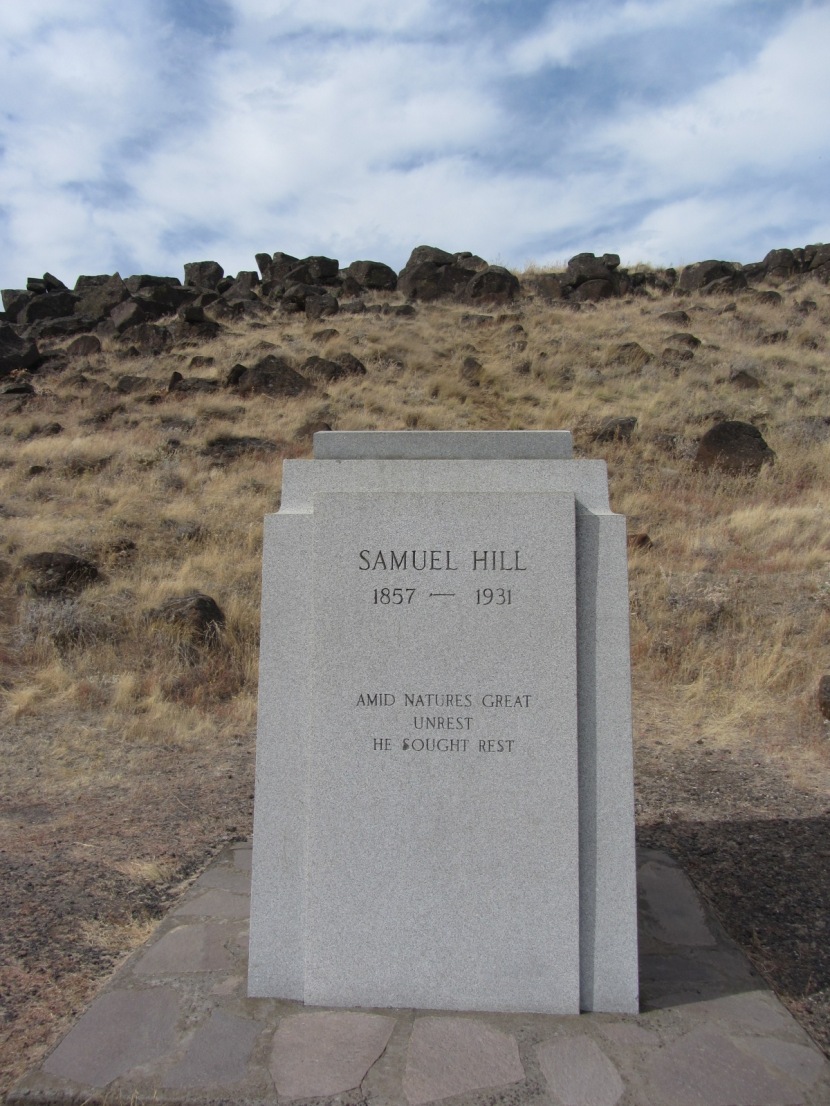 My Mom has told me that she had wanted to name me Sam, but didn’t because it would be associated with the phrase “What in the Sam Hill?” (in which Sam Hill stands in as a euphemism for hell). No one seems to know for sure where that particular expression came from, but it apparently has nothing to do with the Samuel Hill who is buried at the Stonehenge Memorial. (Wikipedia, suddenly my source for everything, makes that clear.)

So what in the Sam Hill am I doing living on the east coast when such splendor is readily available out west?

That, my friends, is a query for another day. For now I’d simply like to extend my gratitude to Jared Ravich, a Pacific Northwest-based Senior Technical Producer here with MLB Advanced Media whose thoughtful suggestions provided me with the template for this most memorable afternoon. 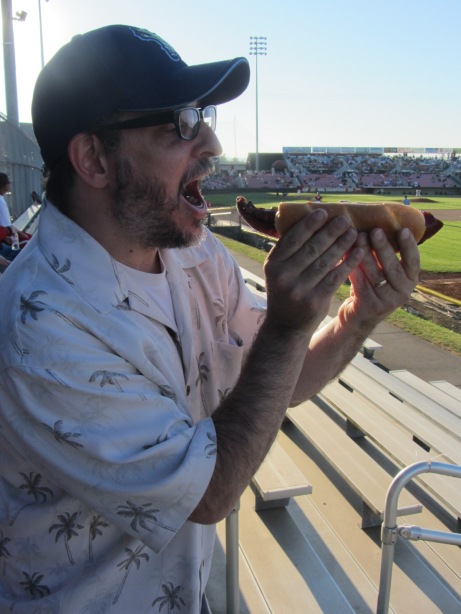