The last “Return to the Road” dispatch ended with some pictures from what I declared to be the swankiest team lodging in all of Minor League Baseball — Tacoma’s Hotel Murano. And from the Murano this post shall begin.

The Murano’s hallways offer guests the chance to view a “private collection of some of the world’s finest contemporary glass treasures.” Each of the hotel’s 24 floors showcase a different artist; I, on the 23rd, was located within the realm of Mr. Hiroshi Yamano.

The Murano’s focus on glass artisans was no mere act of random whimsy — Tacoma is home to the Museum of Glass, in recognition of the influence that artists from the Pacific Northwest have had on the medium. So when I set out to briefly explore downtown Tacoma before heading to Everett, the Museum of Glass was my destination.

Along the way I passed this statue, without stopping to learn who this woman was and what she stood for.

Union Station — formerly a train station, currently a courthouse — had charm, style and panache to spare.

As did the statue out front, entitled “New Beginnings.” It was installed as part of the city’s 1984 centennial celebration, and the man depicted is an early 20th-century railroad passenger with a jaunty step and optimistic world outlook.

Inspired, I strolled through Tacoma’s downtown with the same levity of spirit I imagined the above bronzed passenger to have once possessed. 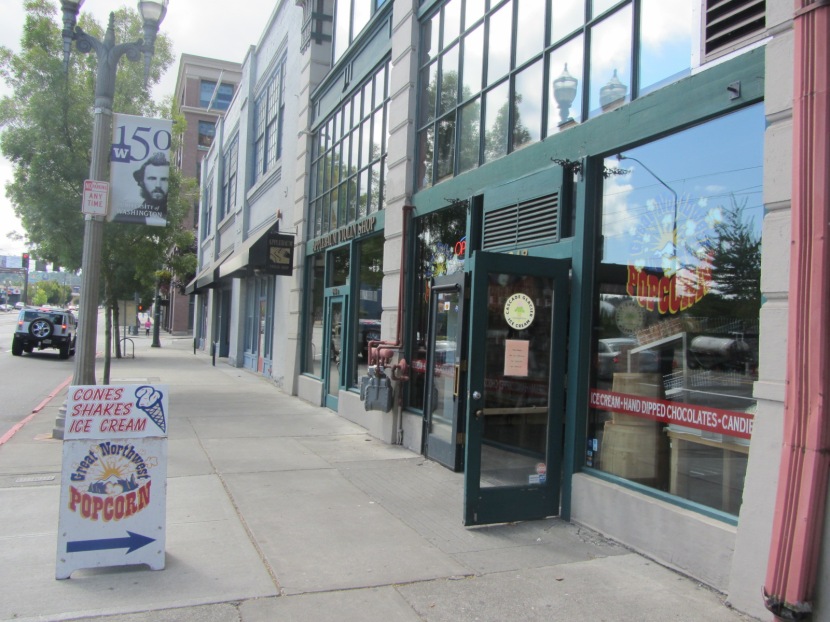 Finally (and by “finally” I mean “within 5 minutes”) I came to a vantage point which included the conical Museum of Glass as part of the backdrop. 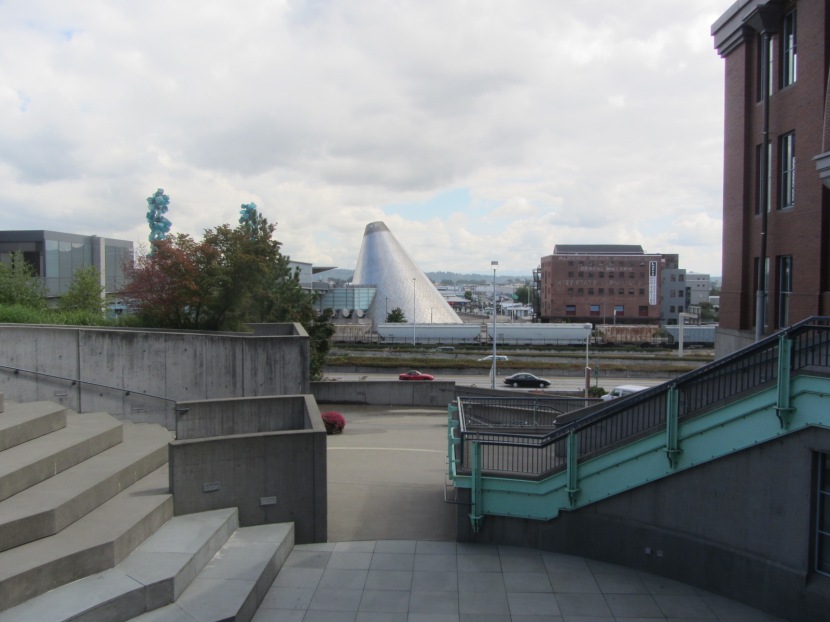 Of course, time is always at a premium when I’m on the road. So as opposed to actually going into the museum, I just checked out the glass specimens lining both sides of a pedestrian bridge that led to the museum. 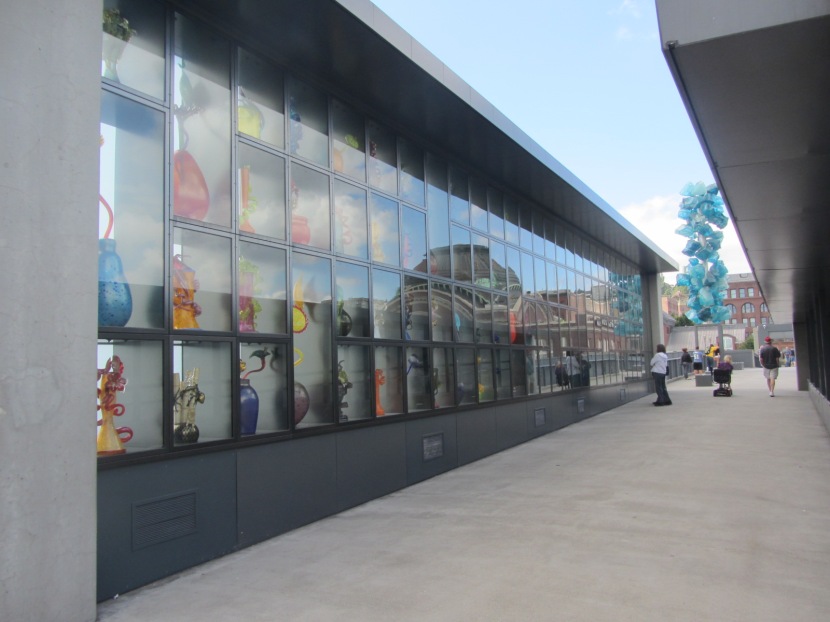 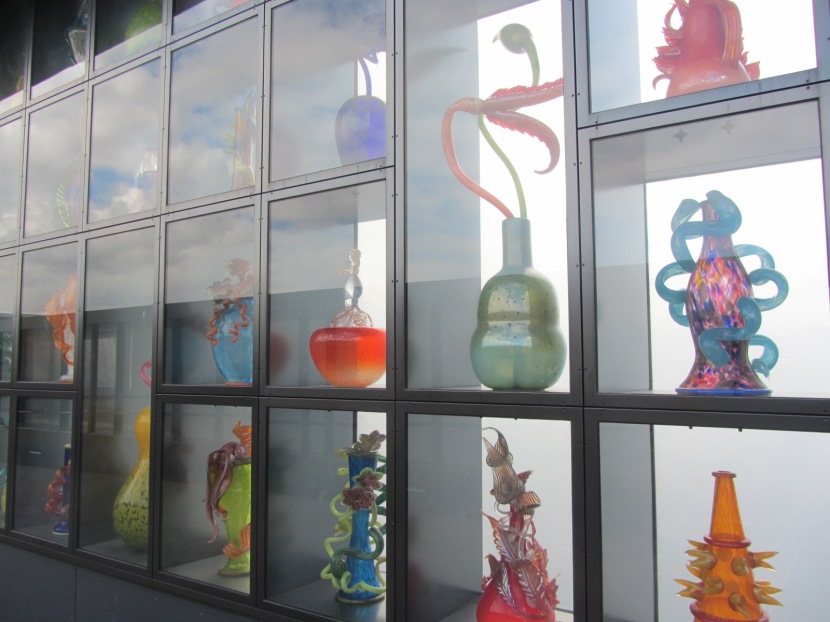 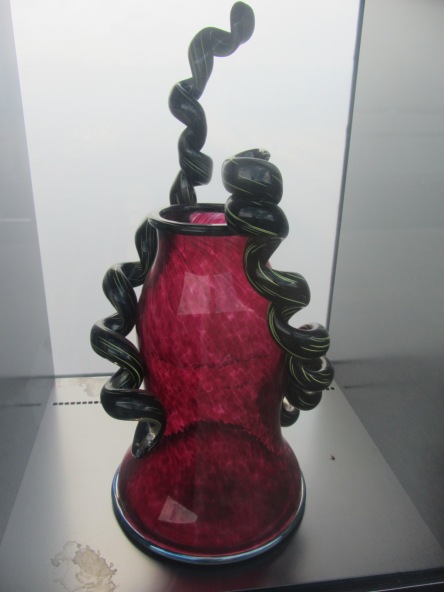 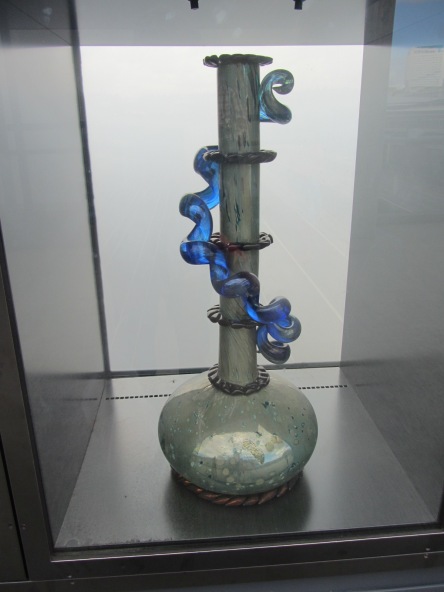 For tobacco use only

The view from the ground. 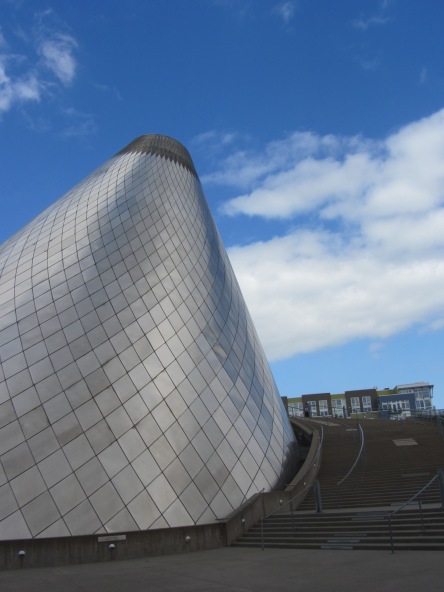 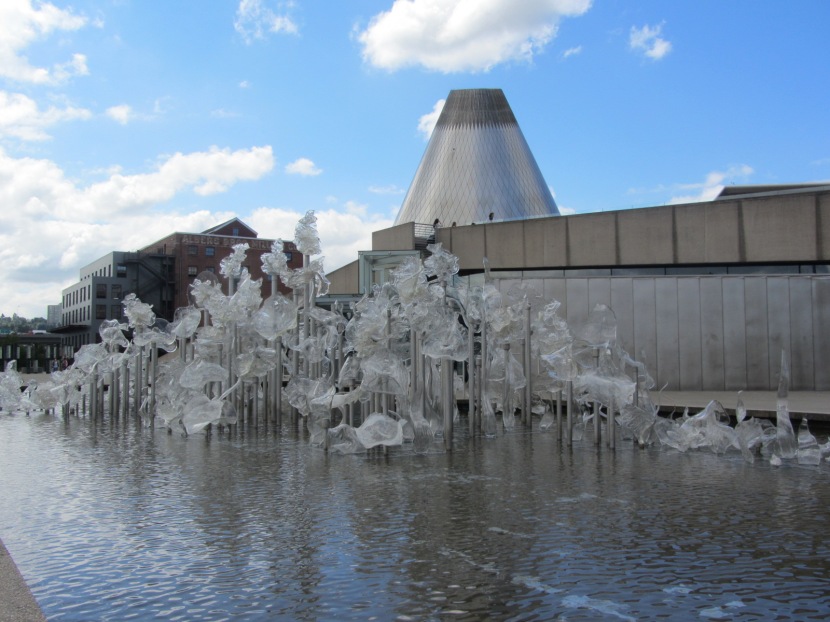 Anti-climactic as it may be, that’s all I’ve got from Tacoma. My next destination was Everett, whose team hotel was a Holiday Inn.

I knew I was in the right place when, upon parking, I looked up to see a team bus poking through the trees.

And while this Holiday Inn lacked some of the Hotel Murano’s more memorable amenities (for instance, I was not able to have the Bhagavad Gita delivered to my room), it did boast what is certainly the most wonderful view of any Minor League team hotel.

I attended that evening’s Everett AquaSox game, and wrote like crazy all about it. (In fact, my writing was so passionately incendiary that even the links to it have since burned up.) Time was even tighter than usual the following afternoon, as an international journey (to Vancouver) awaited me. Nonetheless, I spent about an hour wandering about in downtown Everett before getting lunch at a Thai restaurant and then resuming my travels in earnest.

Everett had character, and I’d love to return some day. 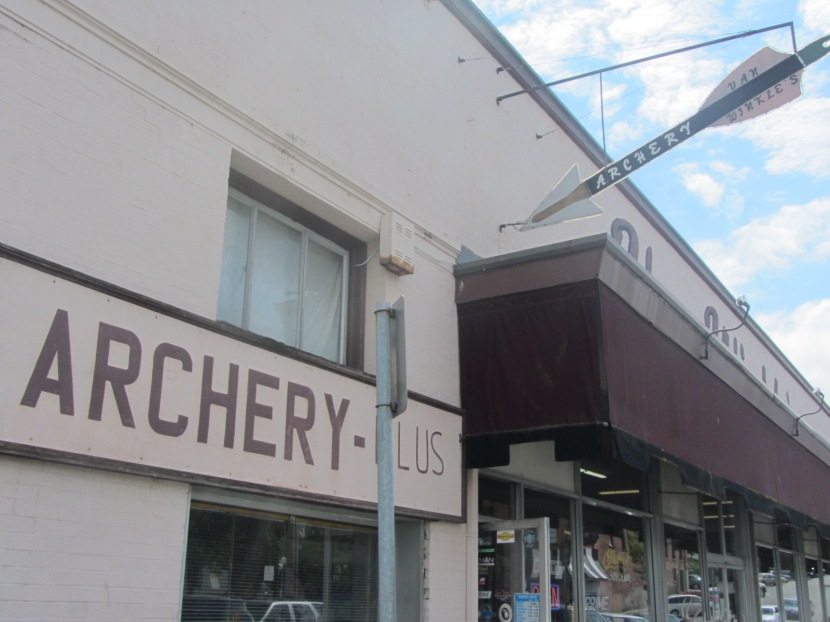 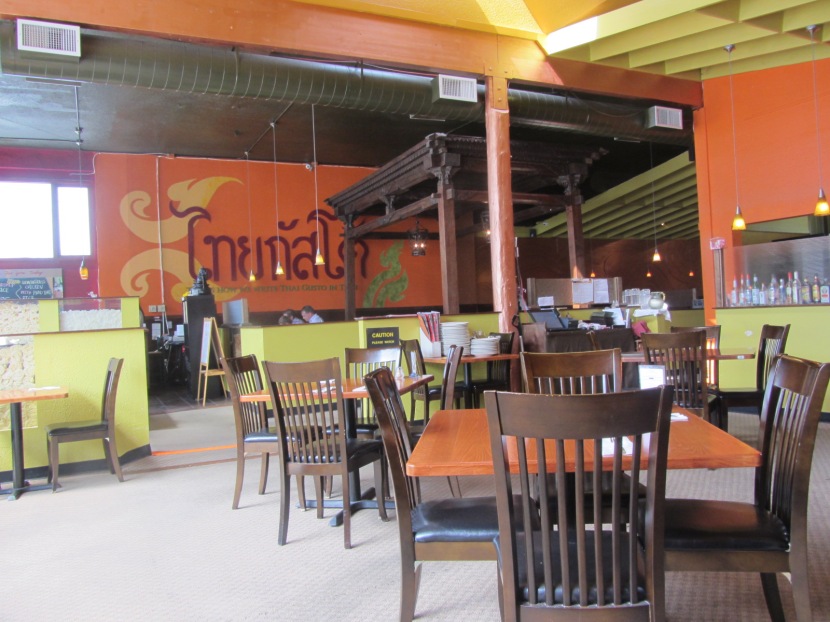 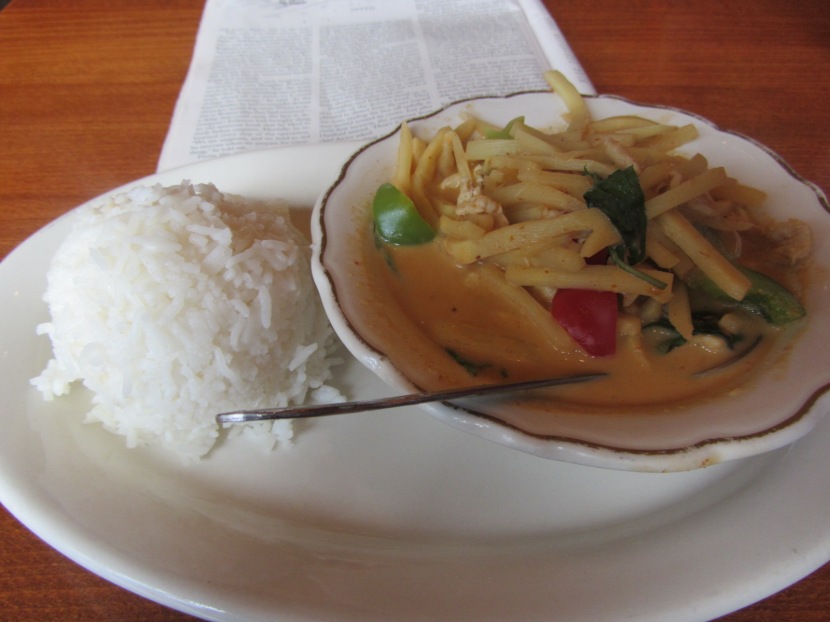 After that it was goodbye to the antiquated signage of Everett…

and hello to Peace Arch National Park, my entryway to Canada.

The cars going in the other direction were fleeing Canadian tyranny

Peace Arch Park was beautifully maintained, and as a big fan of Paul Robeson I enjoyed driving through the locations of one of his most significant public performances. From Wikipedia:

In 1952, African-American singer and activist Paul Robeson, banned from international travel during the Red Scares, performed several concerts at the site. He sang from a flatbed truck on the American side to an audience in Canada.

And would you believe that the Peace Arch was built by Sam Hill, the peripatetic Quaker who constructed the full-size Stonehenge replica which I had visited several days prior? That guy was real go-getter, and as a slow-moving and rapidly-stagnating blogger I can’t help but feel that I’m not quite living up to the high surname standards he established.

It took approximately forever to get into Canada, and I pity those who have to cross the border on a regular basis. I did enjoy the interrogation I received from the border guard, who tried to poke holes in my “Minor League Baseball writer traveling to Canada in order to cover the Vancouver Canadians” alibi.

Guard: And how long have you been writing about the Minor Leagues?

Guard: If you’ve been doing this for that long, then why is this the first time you’ve visited Vancouver?

I explained, as succinctly as possible, that Vancouver was the only Canadian team in the Minors and that, therefore, visiting Canada as part of my job was not, nor was it going to be, a common professional occurrence. (In fact, I was looking at it the highlight of a perpetually uncertain odyssey that began with writing game recaps on the night shift on a part-time, hourly basis. What I wanted to say was “Look, lady, you should be proud of me that I’m here talking to you at all.” I then would have felt an overwhelming sense of guilt for referring to her impolitely as “lady.”)

I’m not sure who’s bored-er at this point — the guard or the straggling few readers who have stuck with this post to the end. So, anyway, yeah: I made it to Canada, and I have the fake money to prove it.

The road will be returned to (at least) once more, with all of the supplemental content that’s fit to post from the wilds of Vancouver. Stay tuned for another installment of the most low-stakes and meandering series of blog posts to be found on the internet…