In one of last week’s posts, I detailed a triumvirate of satirical responses that Minor League teams had come up with in regard to recent events. Well, there’s always more where that came from. One endeavor that I failed to include involved the Eugene Emeralds, who uncovered a bit of fortuitous news in the same week that they unveiled their new Sasquatch logos.

Take it away, press release, the way you have oh so many times before:

In the same week that the Eugene Emeralds Baseball Club released their new Sasquatch inspired logo, researchers have released a study finding DNA links between humans and the legendary Bigfoot.  “Genetically, the Sasquatch are a human hybrid with unambiguously modern human maternal ancestry,” reads a statement released by former veterinarian Melba T. Ketchum, the lead researcher of the study. “Researchers’ extensive DNA sequencing suggests that the legendary Sasquatch is a human relative that arose approximately 15,000 years ago.”

The Emeralds have fielded questions from fans all week inquiring about the association between the Eugene Emeralds and the new Sasquatch logo.  “Now it is clear,” said Ems General Manager Allan Benavides,  “How is Eugene linked to Bigfoot?  Well, we are all linked by DNA.  You know, science.”

Fans have also been concerned that the introduction of the Sasquatch logo means the end of the loveable bright green bear mascot Sluggo. While Sasquatch is not taking over for Sluggo, the Emeralds are looking into the potential of having a live animal mascot at home games similar to the Universities of Colorado, Georgia and Texas.  The organization is seeking a group of nature enthusiast interns (unpaid of course) to search out a live Bigfoot.  Applications for this internship can be emailed to info@emeraldsbaseball.com or mailed to PO Box 10911, Eugene, OR 97440.

Initial plans are to use Bigfoot as the world’s largest batboy.  The team has petitioned the league to have umpires undergo wilderness training to mitigate the risk of on-field attacks.

I queried the Emeralds, via Twitter, regarding the response to this unpaid internship offer. They report that they have indeed been contacted by interested applicants, and have even been in touch with a local high school’s “Squatch Club.”

For a less-recent example of excessive hair on the baseball diamond, check out this 2011 West Michigan Whitecaps innovation: the Logan Hoch cam!

Finally, fans of Minor League Baseball, movies, and the intersection of the two might enjoy my recent article on the film Parental Guidance. It stars Billy Crystal as Fresno Grizzlies announcer Artie Decker, and the opening scene was filmed at Chukchansi Park. 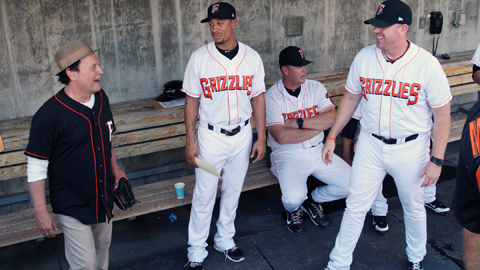 Crystal chatting up the Grizzlies during a break in filming

The article I wrote was, naturally, quite baseball-centric. But I’d like to make it known that, above and beyond the MiLB connection, Parental Guidance is a quality family movie. Yes, it suffered at times as a result of trying to be all things to all people, but it had heart, was well-written and acted, and even included a Ralph Branca cameo. In looking at some of the negative reviews it got online, my response is “Lighten up!” Making a film that can really and truly appeal to the whole family is a delicate balancing act, and Parental Guidance succeeded far more than it failed.

All of this, on some level, is a metaphor for Minor League Baseball itself.