This past Friday sure turned out to be a doozy in the world of Minor League promotions. The independent Florence Freedom got most of the attention with the announcement of their “Manti Te’o Girlfriend” bobblehead (the box is empty, see?), but they were soon joined on the affiliated front by the Brooklyn Cyclones.

On June 21, the team will be staging “Fictitious Friday.”

Below, please find a bite-sized portion of the Cyclones press release:

Anyone who purchases one ticket at regular price will be allowed to bring their make believe significant-other to the ballpark free of charge. Fans will also have the chance to draw a picture of their girlfriend, because obviously something came up and she couldn’t make it, so that their friends can finally see what she looks like. As a special treat, MCU Park will host a unique petting zoo for those in attendance, featuring a unicorn, a mermaid, and a Minotaur. The Cyclones are also in discussions with the Loch Ness Monster and Big Foot to throw out a ceremonial first pitch that evening. In keeping with the tradition of Coney Island amusements, the Cyclones will put a spin on a traditional carnival game, as fans that are able to toss a ping-pong ball into a fish bowl will receive a catfish. Lastly, all of the player headshots used on the video board will just be random people whose photos we find on the Internet.

Eager, as always, to get the facts behind the fiction, I contacted the Brooklyn Cyclones for more info on this most imaginative of promotions. GM Steve Cohen was quick to provide answers to my queries:

Steve Cohen: It depends on if they take up a seat or not. To keep up with the ruse, you might need an empty seat next to you in case you run into somebody you know. This way if they ask where your girlfriend went, you can tell them “Oh, you just missed her. She just went to grab something to eat, but she was sitting right here.” We have always supported make believe girlfriends – haven’t you seen our staff?

How are your negotiations with the Loch Ness Monster and Bigfoot progressing?

Steve Cohen: Not good. The market for make-believe creatures is currently at an all-time high. Their agents see this as a golden opportunity to cash in and they are asking an enormous amount as an appearance fee. Plus they are making odd demands like every picture we take of them needs to be out of focus and from at least 100 yards away.

A most demanding celebrity guest

How many catfish do you expect to give away on this special evening?

Steve Cohen: We had a couple wash into our office during Super Storm Sandy, so we already have a pretty decent supply to start off with.

If this promotion is a success, will other make-believe promotions follow?

Steve Cohen: You bet — the make-believe ones are a lot less expensive than the real ones!

And would you believe that yet another team has jumped into the fray? I bet you would! In the wake of the Cyclones’ “Fictitious Friday,” the San Jose Giants announced that April 12 would be “Lennay Kekua Night.” Per the team:

Items such as catfish will be featured on the Turkey Mike’s BBQ menu and fans who purchase a game ticket can bring their imaginary or real significant other to the game for free. A meet and greet will also take place prior to the game for all couples to introduce their significant others to their parents, to avoid any confusion about the existence of a boyfriend or girlfriend.

Two free future game tickets will be given to all fans who dress like Manti Te’o and to all Stanford University students because they may know or be Te’o’s girlfriend. During the game, promotions will include individuals and their imaginary significant others competing to win great prizes.

For the record, I am no stranger to on-field solo competition:

Oh, and “speaking” of the Lake County Captains: on Friday they announced the first Lance Armstrong-themed promotion in Minor League Baseball (my guess is that, risky topic or not, other teams will follow suit). I went ahead and wrote an MiLB.com news piece on it, yet another specious example of how I am using whatever talents I have to the best of my abilities. Here’s the graphic that ran with the piece: 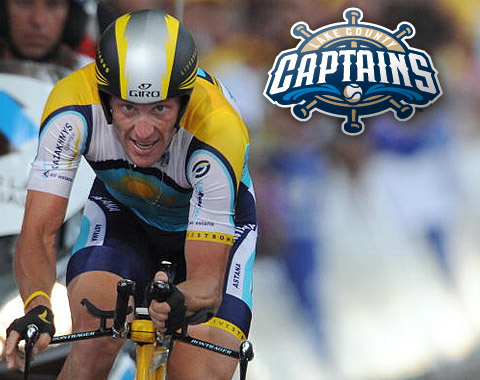 And that’s about all I have to report on regarding this particular news “cycle.”