As you may recall, the last post on this blog was a bountiful bouillabaisse of ripped-straight-from-the-notebook Minor League news items. Well, that’s what this post is gonna be dedicated to as well.

But before we get started with that, please click THIS LINK to read this MiLB.com article detailing my Top 10 favorite Minor League stadiums. Feedback is appreciated and encouraged, and views both complementary and dissenting will be included in a future blog post.

And now, to the notebook!

I’ve never been a Jay Leno fan, but nonetheless there’s always been one thing I’ve loved about his show and that’s the weekly “Headlines” segment. And wouldn’t you know it? Last month, none other than the Lehigh Valley IronPigs made an appearance thanks to this newspaper ad:

Watch it HERE, the IronPigs reference is around the 2:30 mark.

I haven’t yet compiled my 2013 Minor League promotions spreadsheet (yes, compiling such a spreadsheet is an annual offseason task), but one giveaway item that has already caught my eye — and you know how painful that can be — comes courtesy of the Lake County Captains:

On Saturday, July 6, a Skipper Rock-N-Bobble doll featuring the Captains mascot paying tribute to Randy Newman, an inductee in this year’s class of Rock ‘N Roll Hall of Fame musicians, will be given to the first 1,500 fans compliments of Sysco. This year’s doll will also feature a sound clip from Randy Newman’s Burn On, which is synonymous with the Major League movie.

Yes! A Randy Newman-themed giveaway. And one featuring a song from “Sail Away,” arguably his best-ever album (it’s certainly my favorite). Here’s hoping Randy Newman promos spread through the Minors like a fire on the Cuyahoga. How about “Salute to American Foreign Policy Night”?

Remember a few weeks back when I wrote about the Hickory Crawdads’ “Day in the Minors” fan package? This post prompted an email response from New Hampshire Fisher Cats’ media relations manager/broadcaster Tom Gauthier, who wrote:

While we don’t have a program like [the Crawdads], we do offer a program for young kids to experience a day in the life.  We work with Citizens Bank (sponsor love) to open up a handful of jobs for kids ages 6-16.  They shadow with us for an afternoon and then through the game itself.

Meanwhile, I’m more than happy to have kids shadow me for a day. As a veteran blogger, I will teach them how to show up to the office late and disheveled, overpay for lunch in lieu of bringing your own, and write jokes on Twitter instead of doing meaningful work.

You may remember my piece last season on the art of scorekeeping. In this piece one of the fans profiled was the pseudonym-ed “Stevo,” and I will now take the opportunity to direct you to his blog “The Baseball Enthusiast.” Stevo has just begun a series of posts entitled “For Those Keeping Score at Home,” featuring “intermediate to advanced” tricks of the trade.

I have a feeling that many readers of this blog will enjoy picking up what he’s putting down.

I’m pretty sure that the Reading Fightin’ Phils are the first team to give away their stadium, even if it is only for a day. Read all about it HERE. Or just look at this visual and wonder.

I know that snow-covered ballpark photos are so two weeks ago, but here’s a good one courtesy of the New Britain Rock Cats. So soothing! 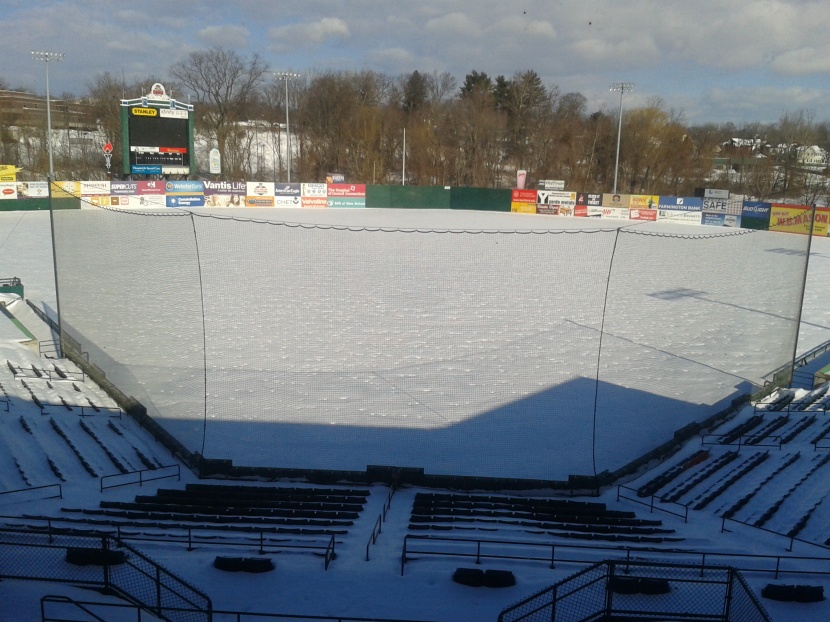 In what I believe is a Minor League anomaly, the hair of Wilmington Blue Rocks mascot Rocky is real and actually grows. And once it grows long enough, he’s going to donate to Locks of Love. Click HERE to see his ‘do.

Proving that just about anything can be capitalized on by Minor League Baseball teams, the Mobile BayBears recently opened their arms to distressed travelers after the beleaguered Carnival Triumph finally limped into Mobile.

The Mobile BayBears would like to give all passengers aboard the Carnival Triumph cruise ship the opportunity to visit the Hank Aaron Childhood Home and Museum for free on Thursday and Friday February 14th and 15th.

“We understand travelers have been through a lot in the past few days,” said team spokesman Craig Durham. “In an effort to make their time in Mobile as enjoyable as possible we encourage them to come see one of baseball’s most unique museums and pay tribute to Mobile legend Hank Aaron.”

The museum will be open from 9-5 on Thursday and Friday, and all non-Carnival passengers will be able to visit the museum for the standard price of $5.

NYC still has a long ways to go when it comes to fully recovering from Superstorm Sandy, and the Brooklyn Cyclones are doing their part via their “Meaningful Mondays” initiative. $3 from every ticket sold to every Monday game will go toward a local charity — read about it HERE.

Speaking of meaningful, I’d recommend that you read these most insightful observations from former Durham Bulls staffer Matt DeMargel regarding why employers should look at Minor League Baseball experience in a positive light.

And now I have reached the end of this notebook page and, therefore, the end of this post. I’ll conclude by sharing this Augusta GreenJackets staff bio. The legend of Dumpster the Stadium Cat continues to grow!