Regular readers of this blog have long thrilled to the culinary creations of John Schumacher (aka “Schu”), the man behind the Pickle Dog, Homewrecker, Pig on a Stick, “alternative tubular meat searches” and many more offerings at Joseph P. Riley Park (aka “The Joe”).

We’ve experimented and were extremely happy with with our Beer Shake creations, and have decided to offer 3 flavors: Palmetto Espresso Porter Chocolate (from a local brewery), Guinness Caramel and Sweetwater 420 Strawberry….they’re delicious!

Schu also reports that the RiverDogs will be offering a beer with the delightful name of “Pig Swig,” created by local grocery store chain Piggly Wiggly. But moving on to harder offerings, there’s this:

We will be adding Moonshine Margaritas to our Tiki Hut using locally made flavored moonshines (Peach & Cherry) from Firefly Distillery.

Such alcoholic concoctions can be paired with new menu additions like, oh, I don’t know, a Peanut Butter and Jelly Jalapeno Bacon Burger. Schu calls it “mindblowing.”

While perhaps not quite as attention-getting as the above, there are plenty of other big changes afoot. From Schu:

We are doing a slight makeover (but staying in the same hemisphere) with the changing of our Nacho House to a Taco House called “Wacko for Taco.” (However, because of their popularity we will continue to offer our Kitchen Sink Nachos.) The Taco Menu will include a Chipotle Chicken, Beef, & Pulled Pork Taco (locally made pulled pork from Sticky Fingers). 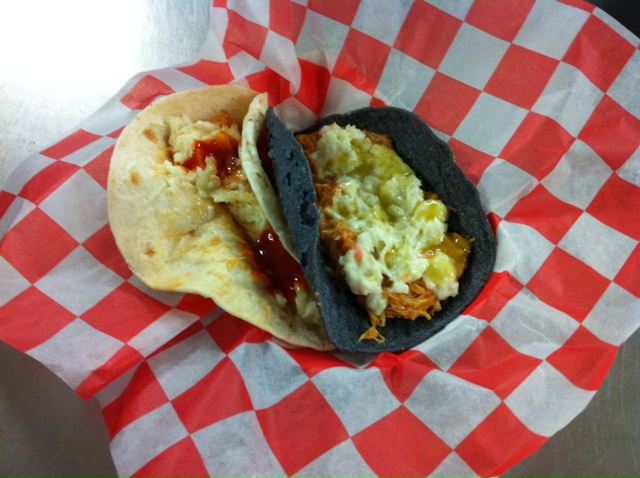 The 2 headliner items will be a Charlie T(aco) Dog which includes both a soft & hard taco with a hot dog, mustard BBQ sauce & cole slaw filling. For the other featured taco, the MUSC Urban Farm Veggie Taco, we will be partnering with The Medical University of South Carolina that recently started an Urban Garden in downtown Charleston. We will be going to the Farm each homestand to harvest the veggies & herbs to use in the taco.

Fans of tubular meats will be happy to know that the team’s Sausage World stand is returning, with a Chicken and Apple sausage now complementing the likes of Alligator, Duck, and Bratwurst. And for those just looking for a light, healthy snack, the RiverDogs now offer the following:

Under our Snack Menu we will be adding Fresh Fried Pork Rinds and Pork Cracklins. In addition we will also be offering Deep Fried Peanuts in Sea Salt & BBQ flavors.

Yes! Rinds and Cracklins (a particular bad habit of mine whenever my travels take me below the Mason-Dixon line). Writes Schu:

They come from a company called Triland Foods out of Iowa. You drop the product in 400 degree oil & they take about 30 seconds to expand (or explode as we like to put it). Then you can dust them with your favorite flavoring.

After a season spent preparing items such as the above, I hope that Schu and his staff can actually fit into these shirts! 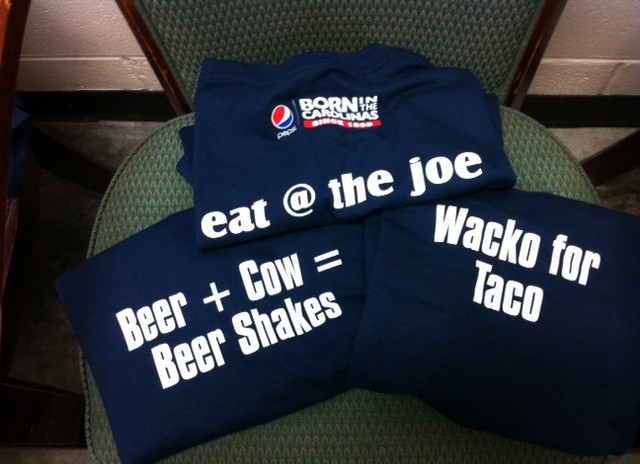