Sometimes when I visit a stadium, my interactions with the team in question don’t extend much beyond a curt hello and a cursory “let us know if you need anything.” Okay, that’s cool, you’re busy and understaffed, I get it.

But on the far other end of the hospitality continuum exist entities such as the Wisconsin Timber Rattlers, who over the course of a two-day visit ran me ragged back and forth across Appleton’s Fox Cities Stadium while involving me in seemingly every aspect of their game-day entertainment. The end result was a blur of toilet paper, duck calls, air-blasted bratwurst, (evil) mascot antics, bullpen tomfoolery, tailgating, club level feasting, pyrotechnic viewing and, of course, cheese curds. This is Wisconsin, after all.

And on top of all that I even landed an interview with the Dean of the Midwest League himself, enigmatic Timber Rattlers announcer Chris Mehring! What a journalistic coup, what a whirlwind couple of days, and don’t even get me started on my time away from the ballpark  (in which uber-hospitable Appletonians, working in shifts, gave me a tour of the sights, sounds and, of course, the food of their beloved hometown. Appletonians love their food, I’ve learned).

I’m not sure how to best present all of this material, all I know is that it’s going to be spread out across several platforms and that it’s going to take awhile. So — deep breath! — let’s just do the most sensible thing and start at the beginning. The rest — from Appleton as well as the ensuing five cities on this trip — will follow.

I arrived at Fox Cities Stadium 90 minutes before game time, and already there was a phalanx of fluorescent parking attendants directing a steady stream of cars.

Many of these early birds were here to tailgate, an activity rarely associated with Minor League Baseball. But in Wisconsin, it’s simply standard operating procedure for all professional sports events.

Therefore, the Timber Rattlers are just fine with their ballpark’s location. “Downtown revitalization” is an industry catch phrase and current most common justification for a new stadium, but Zerjav remarked that “we wouldn’t want to be downtown. We’d lose the tailgating.”

Not that the T-Rats need a new stadium. Fox Cities Stadium was built in 1995, and underwent a $6.2 million renovation prior to this season. It’s doing just fine. As the gates opened at 5:30, there was already a formidable line to get inside.

Bring Your Boat to the Ballpark

Upon entering the ballpark, fans were presented with complimentary Kleenex product.

The gratis facial tissue was part of a “Salute to Paper” promotion, staged annually in honor of Appleton’s paper industry The city is even home to the Paper Discovery Center, an institution which takes it upon itself to induct individuals into the Paper Industry International Hall of Fame (PIIHOF which I pronounce phonetically as Pie Eye Hoff as that sounds like the name of a 19th century baseball player.)

Sorry, I don’t have streaming video.

Further back on the concourse, one could find this surprising edifice. 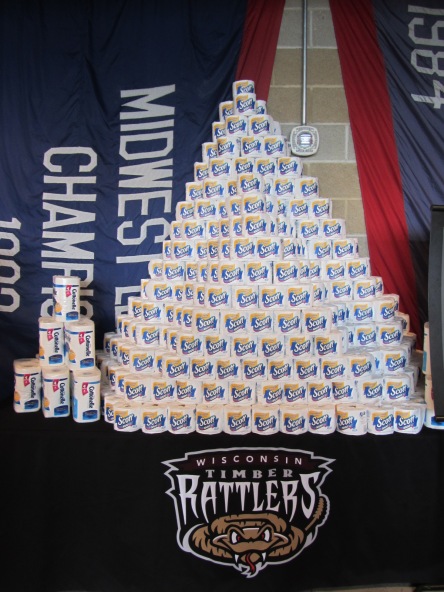 In the above photo, the Timber Rattlers’ 2012 Midwest League Championship banner is obscured by a two-ply toilet paper pyramid. Perhaps this can be seen as an unwitting metaphor for Minor League Baseball’s overall entertainment priorities, but, point is, the Timber Rattlers are coming off of a great season.

Their championship trophy is on display in the lobby of the newly renovated front office. 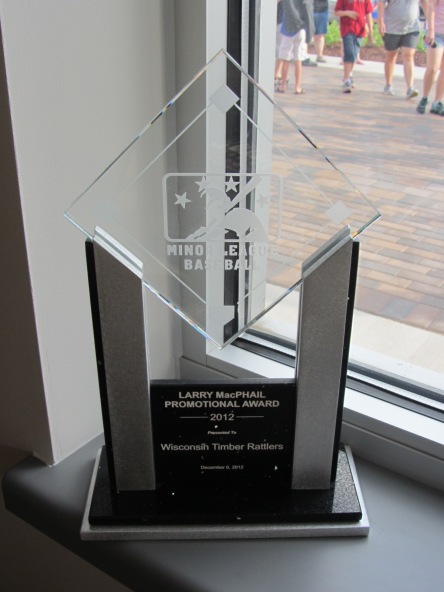 Zerjav gave me a tour of the new and improved front offices, but somehow the only pictures I managed to take involved the only in-house taxidermy studio in Minor League Baseball. 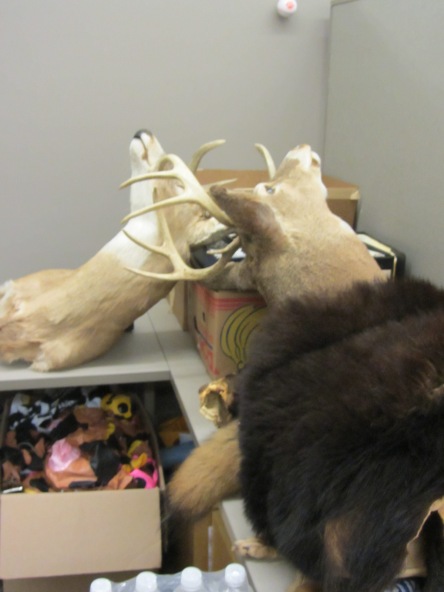 Actually, the above montage was in preparation for the following day’s promotion. But let’s not get ahead of ourselves…

Another major part of the renovations was this year-round club level area. It can fit approximately 250-300 people, and the Timber Rattlers are renting it out for events on non-game days (a wedding reception was held there recently, for example). 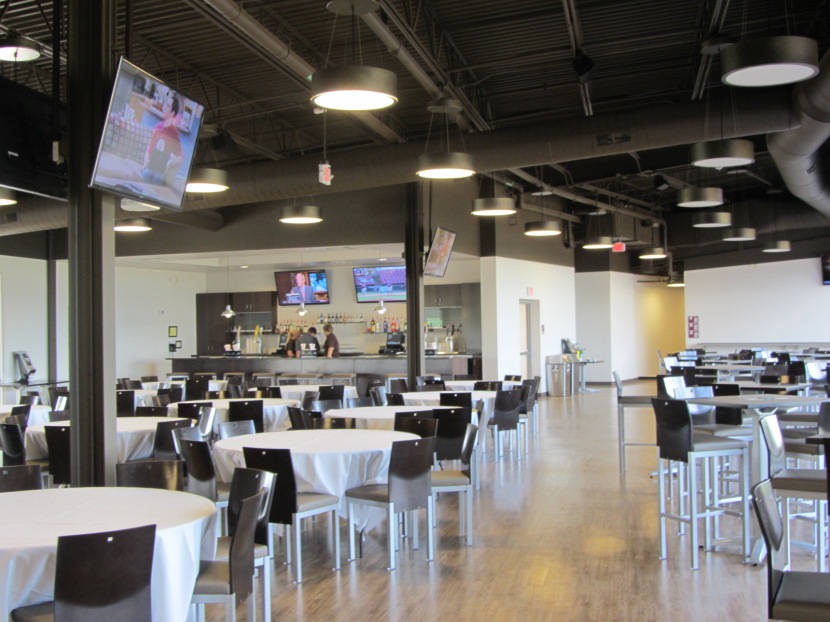 It was turning out to be a beautiful evening, and as I was up there in the club level assistant director of food and beverage Chumley Hodgson displayed his superhuman strength by lifting up the glass panel windows and stacking them vertically off to the side.

The renovations also included the addition of nine suites (there are now 12 total). The centerpiece of these new suites are sturdy and quintessentially Wisconsonian tables made of reclaimed barn boards that date back as far as the 1780s.

I’ve gotten complaints that this blog has become too reclaimed barn board-centric, so let’s move back down to ground level. As part of the “Salute to Paper,” an endearing arts and crafts center had been set up down the third base line.

Nearby, one could find the best seat in the house.

Fox Cities Stadium doesn’t have a 360 degree concourse, but it’s getting there. Zerjav mentioned that that’s the ultimate goal, and that the team is expanding by degrees as time and money allows (the team, like the nearby Green Bay Packers, is community owned. That’s a tangent for a future blog or article, but let it be known that team shares can be had for $50). 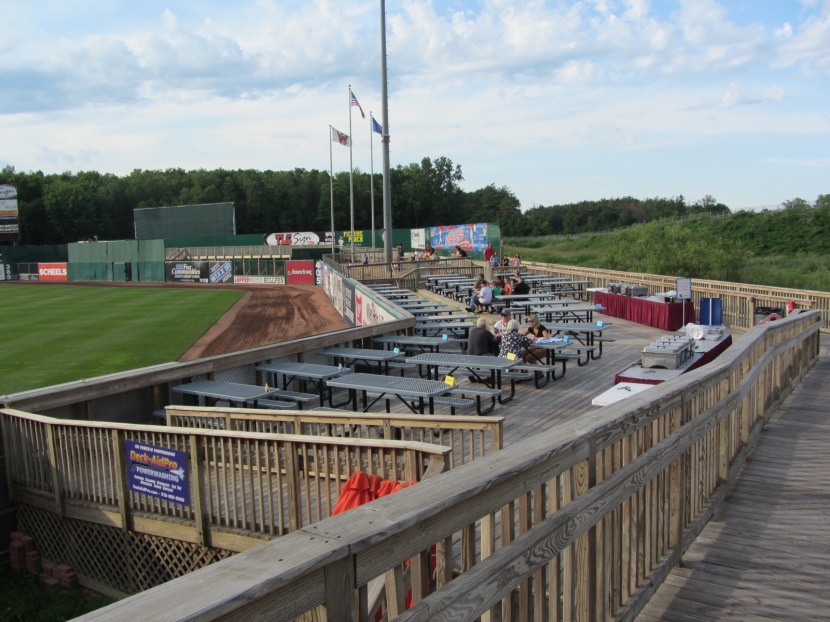 A recent addition, and an unexpected one, can be found beyond the picnic area.

Zerjav says that this sandy area was inspired by the Myrtle Beach Pelicans.

“In Myrtle Beach you’d expect a beach, but by putting one out here we didn’t know what to expect,” said Zerjav. “Girls in bikinis? Turns out that the kids love it, and parents love it too because it looks like they’re watching their kids when they’re really watching the game.”

The view from the boondocks: 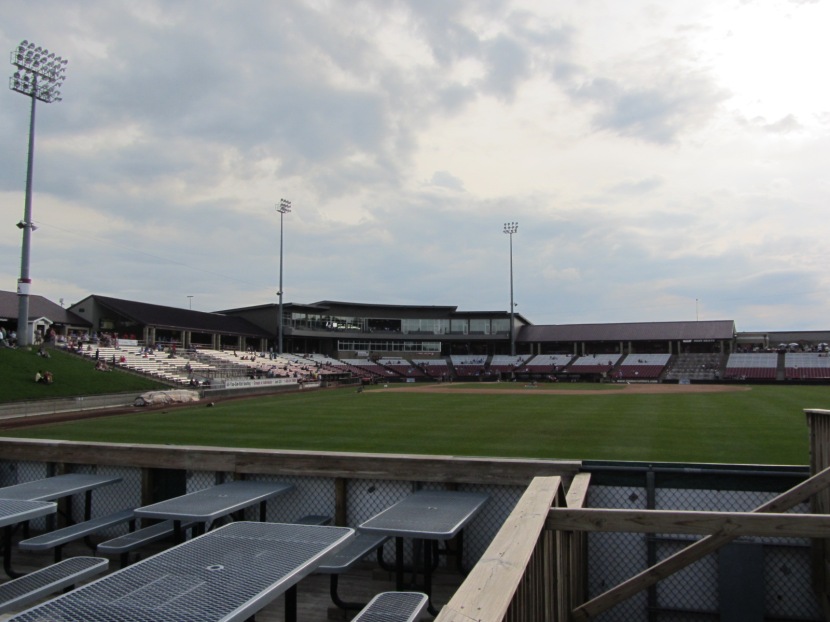 With game time approaching, I traveled 180 degrees and onto the field. There was important business to attend to. 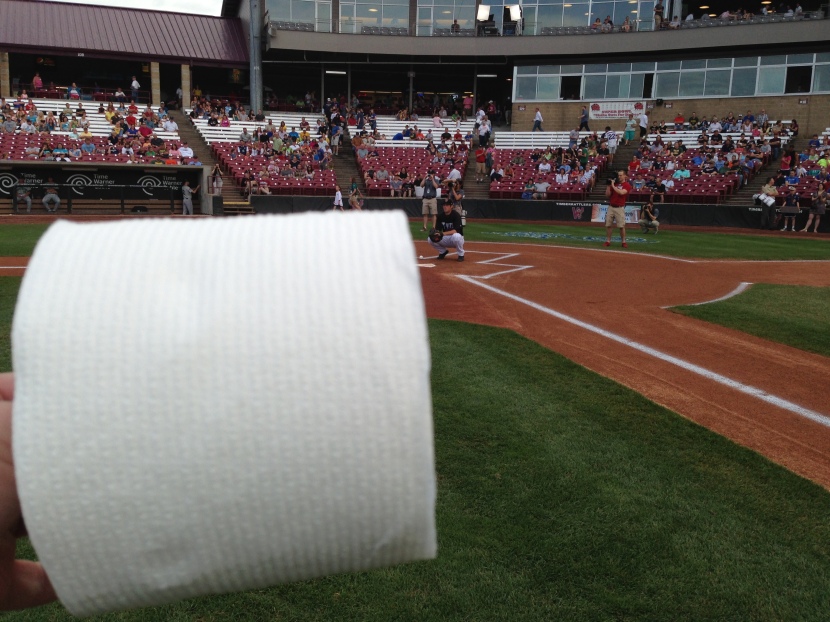 Proudest moment of my life! 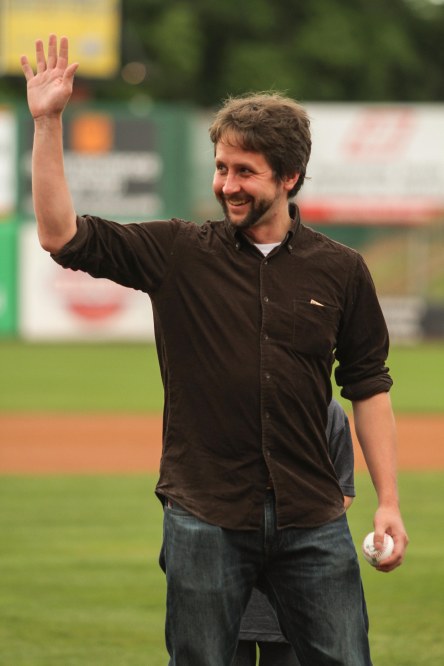 But I wasn’t the only one throwing toilet paper. After the National Anthem, just before taking the field, the Timber Rattlers threw roll upon roll into the crowd.

This calls for the first of MANY Vines that have been/will be produced on this road trip. (Follow me on Twitter and/or Vine to see them all, and please let me know your favorites and least favorites. I’m working toward becoming a Vine auteur.)