Due to the vagaries of my travel schedule, I didn’t get to spend much time in (what I presume to be) the fine city of Lansing. I arrived in the late afternoon and was gone the next morning, but in that short amount of time I experienced a lot here at Cooley Law School Stadium.

My evening with the Lugnuts began with these guys, who, as you can see, are masters of facial expression variance. 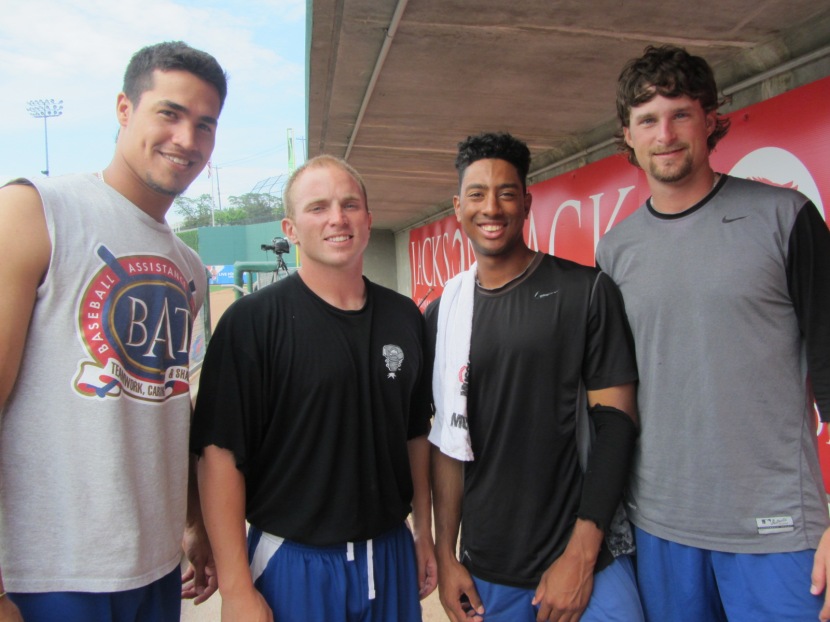 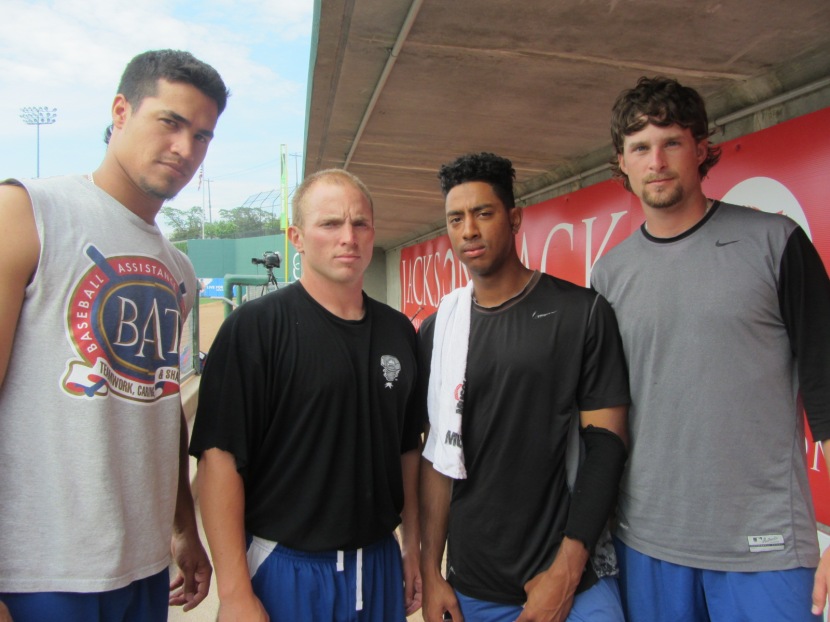 From left to right, that’s Efrain Nieves, Arik Sikula, Justin Jackson, and Wil Browning, bullpen members all. I interviewed this relief quartet about their “Follow the Leader” ritual, in which they walk from the clubhouse to the bullpen while scrupulously mimicking the movements of that night’s “leader.”

The MiLB.com article that resulted from this interview — part three of my “Bullpen Trilogy,” for those keeping track at home — is a great read AND contains video so, really, you’ve got nothing to lose. Read it HERE or die trying.

The interview took place in the home dugout, as batting practice was winding down. As you can see, it was shaping up to be a beautiful evening in Lansing. 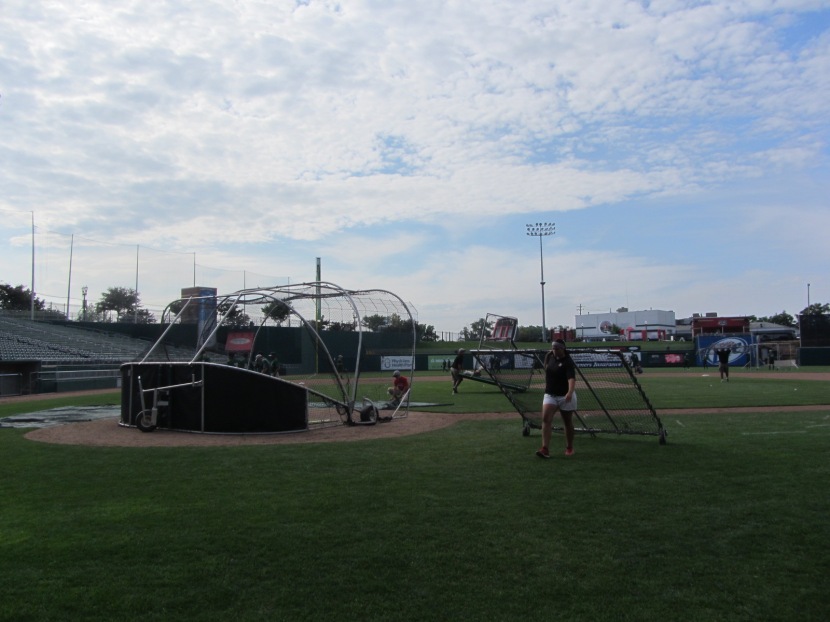 These early evening dalliances were under the direction of Lugnuts broadcaster Jesse Goldberg-Strassler.

You may remember Jesse from such MiLB.com pieces as “Goldberg-Strassler still paying tribute” (on his annual “re-creation” game broadcast; this year’s version scheduled for August 7), “Wordsmith crafts gem of baseball book” (on his Baseball Thesaurus, which he’s holding in the above picture), and “Hyphenated Last Names: Good in theory but patently unsustainable” (that one doesn’t actually exist).

En route to the press box, Goldberg-Strassler briefly introduced me to senior food and beverage director Brett Telder. Lugnuts owners Tom Dickson and Sherrie Myers also co-founded Professional Sports Catering (PSC), a MiLB-centric concessionaire, and, well, I guess you could say that Telder is passionate about the company that he works for.

Telder will appear in part two of this post (oh boy will he ever), but for now: let’s take a look at the stadium’s upper level and those who may reside therein. This suite-level lounge area is called the Clubhouse, an open-to-the-public seating area (tickets are $22.50).

That’s Matt LaWell on the left, who you may remember as the male half of the married couple who traveled around the country last season for their “A Minor League Season” project. Matt actually followed me around for most of this road trip, as I’ll be one of the featured characters in the “Minor League Season” book. You all want to read a detailed profile of Ben’s Biz, right? Right?! Then get psyched! (In all seriousness, and self-deprecating self-promotion aside, Matt is a skilled and conscientious writer and when the book appears it will be a must-read for Minor League aficionados and printed word junkies alike.)

As for Jesse, forthcoming book projects were of little concern to him at that moment. He had a gigantic Lugnut to point out!

Yes, that really is a giant lugnut installed atop a nearby smokestack, and its sheer size perhaps makes up for the fact that the Lugnuts’ logo depicts what is in actuality a bolt. Let’s go in for a closer look on this lugnut, while there’s still time: 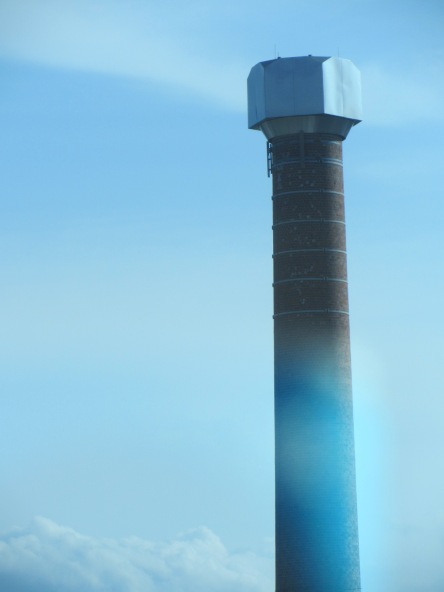 In the other direction, one can find a baseball field. It’s amazing, really, these things one finds.

It might not be too apparent in the above picture, but Cooley Law School Stadium has some seriously odd dimensions. Its rampant eccentricities are mostly a result of having been shoehorned into a downtown location, but they are eccentricities nonetheless: 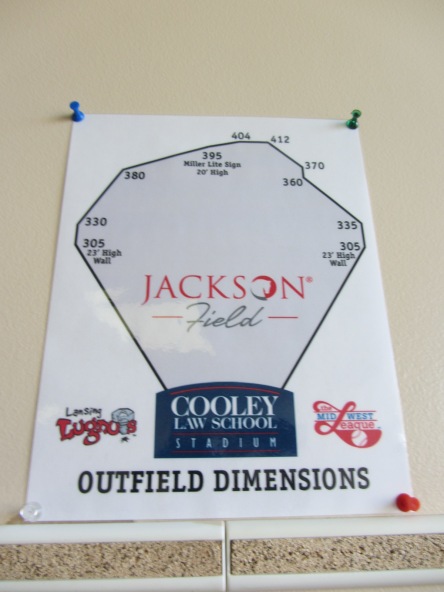 As you can see, it’s only 305 feet down the lines. However, these walls are 23 feet high and therefore not all that many home runs are hit at Cooley Law School Stadium. Jesse remarked that it is one of the hardest Minor League stadiums to hit home runs in but, conversely, one of the easiest in which to score runs.

And — full disclosure! — in the picture I included above in which Jesse was pointing, he clearly wasn’t pointing at the giant lugnut. As this Vine (filmed a bit later in the evening) shows, that would be impossible as the lugnut is located behind the stadium itself.

Meanwhile, back in the pressbox, I had a brief conversation with a Minor League Baseball rarity: the female PA announcer.

That’s Jennifer Swanchara, a student at Michigan State who is now in her first season with the Lugnuts. According to my calculations she is one of just two female PA currently working in Minor League Baseball, with Bowie’s Adrienne Roberson being the other (there is, of course, a female PA announcer in the Majors as well, San Francisco’s Renel Brooks Robinson).

[CORRECTION! The Mobile BayBears also have a female PA announcer, Christine LaPlante. Am I missing any others?]

Hey, Jennifer, how about a quick interview?

Ben’s Biz:  What led you to the world of Minor League Baseball?

Jennifer Swanchara: I’m going into my junior year at MSU, right down the street. I found out about the position, it was right here in Lansing, and seemed like a perfect opportunity because it was in my field. I didn’t necessarily know if I wanted to go into baseball, but it led me here and I’m enjoying it.

I’ve done work as an analyst before, and DJed, all that kind of stuff, so it’s been fun to take a behind-the-scenes role where you’re adding to the atmosphere of the ballpark.

Ben’s Biz: Was it a challenge at first? Being a PA announcer, it seems like there are so many small details to keep track of.

Swanchara: I was lucky to have some bad weather in the beginning (laughs). It’s been a struggle, but now that we’re halfway through the season I feel in a groove where I’m happy with where I’m at and enjoying the job. At first it was stressful, where I was always thinking about how I had to do this, this and this. I was always worried about the next thing.

Ben’s Biz: What are your thoughts on being one of just  three female announcers in the Minors?

Ben’s Biz: It’s a rarity now, but who knows?

Swanchara: Maybe I’m lighting the way for some women. Maybe. Hopefully (laughs). I’d like to be one of those.

Jennifer is one of two new “voices” on the Lugnuts staff this season. The other is Jesse’s broadcast partner, one Slavko Bekovic.

No, not you Jesse. I’m talking about Slavko now. The guy on your right. Please look in his direction.

Slavko has an interesting background, in that he is a Chicago native of Serbian descent. Serbian was his first language, and he is the first member of his family to have been born in the U.S.

This leads me to what may be a Vine first: Serbian station ID!

Goldberg-Strassler and Bekovic — definitely one of the more unique broadcasting pairings in MiLB, and definitely worth listening to. Meanwhile, next door, one could find Mr. Mike Couzens holding it down in the visitor’s booth. 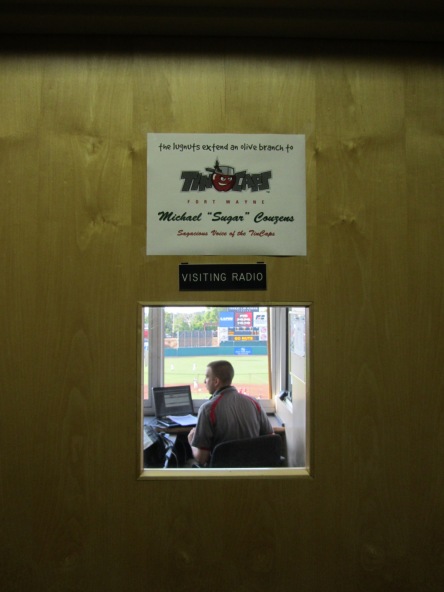 Regarding the sign above the door, I’m not exactly sure why Couzens had an olive branch extended to him. But I do know why he’s called “Sugar” and it’s a story that involves my favorite of all story subjects: mistaken identity.  Read all about it HERE.

But as for what you’re reading right here, on Ben’s Biz Blog? It’s coming to an end, right now. Stay tuned for Part 2 from Lansing, featuring some of the most heroic, adorable, adorably heroic, and heroically adorable designated eating ever recorded.