With a few exceptions, I’ve dedicated the month of October to writing about in-season endeavors that I did not get around to writing about during the season itself. So I guess it’s fitting that here on All Hallow’s Eve, also known as the last day of October, I have finally exhausted my supply of in-season content. The only thing left in my “potential blog items” Excel spreadsheet involved Jacksonville Suns infielder Derek Dietrich and that time that he performed a post-game juggling exhibition. Seriously. 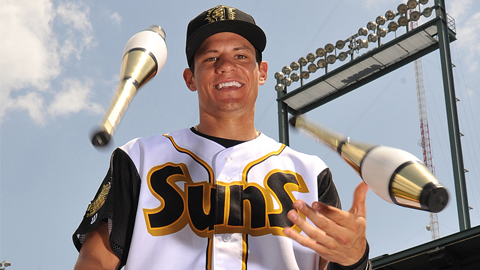 “Derek Dietrich Triples and Juggles Torches” — you know, just another day at the ol’ ballyard.

Dietrich, a 24-year-old infielder who logged 57 games with the Miami Marlins this season, pulled of the above feat during August 13’s game against Birmingham. But that wasn’t the only time he took the field in order to toss dangerous items about. Here he is throwing some knives around, potential trip to the disabled list be damned.

And that’s all folks! There is no more in-season content to be had from me (unless, you know, you want to send me some). Therefore, I suppose that now is as good a time as any to bring this to your attention:

The Trenton Thunder have won the 2013 “Promo of the Year” MiLBY Award, for their “Chase the Bat Dog Retirement Party.” 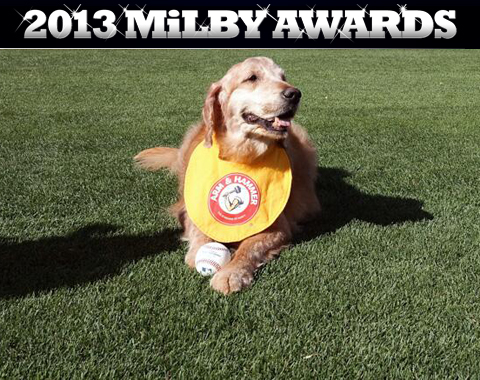 Read the article HERE, which will be my last piece of content recapping the 2013 campaign.

But since I’m on the topic of MiLB.com content — the final “Crooked Numbers” column of 2013 ran earlier this month, and can be read HERE. After the column ran, I was alerted to this exceedingly entertaining and exquisitely “crooked” article by Aberdeen IronBirds broadcaster Jacob Rasch, on “The Oddities of a Suspended Game.” The article details the head-spinning specifics of a game that took some 33 days to complete, and is a must-read for anyone who enjoys the deep wellspring of absurdity that is baseball. Among the many nuggets contained therein, my favorite is this:

The starting pitcher, Austin Urban, struggled in the first half of the game. In four innings, he had given up 8 runs on 8 hits, including the Calderon grand slam. But in the resumption of the game, Urban was given a chance to atone.

“The suspended game fell on my day to pitch, so I got to go back out there,” Urban explained. “In the month that it took to get that game restarted, I made some big adjustments, and I approached it as a completely different start.”

Urban, given the opportunity to keep his team in the game, shut down the same Yankee lineup he had struggled against the month before. In the four innings he pitched after the game was resumed, Urban gave up only 1 hit and 3 walks, striking out 4.

Urban’s final line is strange to say the least: 8 innings pitched, 9 hits, 8 runs (all earned), 6 walks, and 6 strikeouts. All told, he threw a staggering 156 pitches, a number that would seem impossible if there weren’t a 32-day break in between pitch number 72 and 73.

Stump your friends! In 2013, no professional pitcher threw more pitches in one outing than Austin Urban’s 156.