Throughout this year’s Winter Meetings in Orlando, four attendees of the PBEO Job Fair have agreed to keep a journal chronicling their employment-seeking experiences (meet them all HERE). In this installment, Meredith Perri (@meredithperri) lands her first interviews amid a barrage of hotel lobby networking. 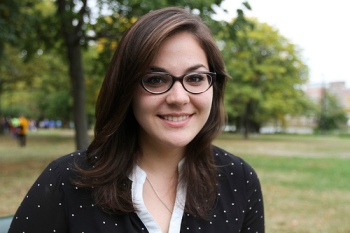 I honestly did not know what to expect when I got to the Swan on Tuesday, but by the end of the day, it seemed like one phrase accurately depicted my experience from start to finish: organized chaos.

Now, that isn’t a bad thing, it’s just what happens when a few hundred job seekers sit in one room anxiously waiting for someone to post a new position or an interview schedule on one of the boards.

I made my way over to the job posting room at 8:30, forgetting that the area didn’t open until 9:00. I wasn’t the only one. Fellow job seekers were scattered throughout the hallways as they waited to see the results from the previous night’s bombardment of the job posting room. When the it opened up, I didn’t see anything, but that was fine. I had worked out my schedule so I would have something to do other than play the wait-and-see game.

Before coming out to the Winter Meetings, I got in touch with a few people that I knew from Twitter, Boston University or SportsNet New York. I’m lucky that my supervisor from when I interned at SNY not only encouraged me to come to the meetings, but also got me involved with the outlet’s online coverage. So, once I didn’t see any new teams to apply to, I made my way back to the Dolphin and picked up my media credential.

I was just about to head back to the Swan to scan the postings again when one of my friends told me that I had an interview. I hustled to the other hotel, signed up for a time in the early evening and did another walk through before going back to the Dolphin to meet up with a beat reporter that I reached out to on Twitter.

During one of my trips to check the latest postings, I ran into [fellow journal writer] Kasey [Decker] in the hallway. We could not have had better timing. As we went from basic introductions to how our experiences were so far, I received a text from a general manger asking if I was near the PBEO area and if I had time to meet with him. Within the next hour I had completed my first interview and felt a lot better about the entire process. A few hours later, I had my second interview, and was even more encouraged.

I found Kasey and a few people she had introduced me to after my interview, and I learned quickly that having a group of people to battle through the now-swamped lobby was a good thing. I stayed with them until a BU alum and beat reporter who has been incredibly helpful during my job hunt was free to chat. Over the course of the next two-plus hours he introduced me to a dozen or so people from different media outlets and beyond.

The evening could not have turned out better.

Now it’s time to pack my bags and head to my final day at the meetings. I have one more interview this morning and hopefully a few more people to speak with before I leave. Maybe it was the organized chaos, but I cannot believe how short my time in Florida was. Regardless, I have one more day, and I’m ready to go.

Note: Meredith is returning to school on Wednesday in order to take her final exams. The other three journal writers will remain in Orlando until Thursday. Check back tomorrow for Meredith’s final entry of the week.