The use of Native American imagery within the world of sports is a controversial topic, as teams like the Cleveland Indians and (especially) the Washington Redskins are under increasing pressure to abandon names and/or logos seen as culturally insensitive. But the Spokane Indians have found a way around this problem, collaborating with the local Spokane tribe to adopt a look that celebrates, rather than denigrates, the people it purports to represent.

This season, the club will wear a jersey in which “Spokane” is written in Salish script. 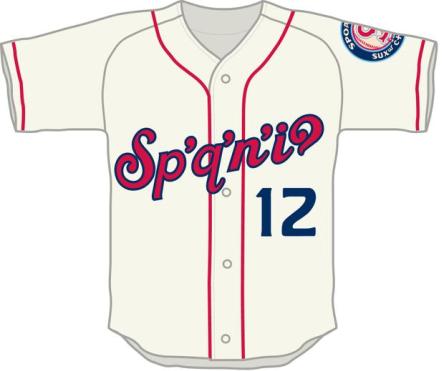 The collaboration between the Spokane Indians and the Salish tribe is nothing new, but the above jersey represents a significant development. In fact, this partnership will be the topic of my next Minoring in Business article, running on MiLB.com tomorrow. Stay tuned!

Speaking of teams sporting a name inspired by their region’s Native American population, the Syracuse Chiefs recently unveiled this:

100 Years of baseball in Syracuse is remembered in our patch/logo designed by Anthony Cianchetta. What do you think? pic.twitter.com/SbbrA1CJG0

But that’s not the only interesting historical sporting overview that I’ve recently found via Twitter. Behold:

Project for the city magazine. Found and recreated unis for every MiLB team that played in Salem/Roa. @salemredsox pic.twitter.com/2b6wApEik9

But as much as some things change, others remain constant. On 3/14 the Bowling Green Hot Rods held a “Pi Day” promo, in which tickets were sold for $3.14 for three hours and 14 minutes, beginning at 3:14 p.m. (And, as an added bonus,  fans who bought the tickets in person were offered free slices of pizza “pi”.)

I was curious as to how this promotion was received, and Hot Rods assistant general manager Ben Hemmen satiated my curiosity thusly.

National “Pi” Day was a BIG hit in Bowling Green. In just three hours and fourteen minutes (3.14), we sold over 600 tickets at the box office or over the phone to games for this upcoming summer. The Power of “Pi” will definitely be something that we look at using next season to tie in a promotional opportunity for our fans.

Among the many items on team to-do lists at this time of year is adding new situationally appropriate song selections to the music database. For help with this endeavor, one enterprising rookie-level P.A. announcer took to Reddit. The resulting discussion is well worth reading.

This blog is also well worth reading, in my less-than-humble opinion, and I thank you for having Reddit.