Welcome to the latest installment of “Return to the Road,” in which I re-trace my steps during my third and final road trip of the 2013 campaign in order to bring you all of the non-ballpark content that’s fit to print. The previous post in the series began in amid the vast expanse of Bakersfield and ended at Visalia’s Lamp Liter Inn, surely one of the quaintest team-affiliated hotels in all of Minor League baseball.

The Lamp Liter still issues honest-to-God keys, and the room signage was a definite blast from the past.

The on-site diner was similarly retro:

Before leaving Visalia I headed downtown and took a stroll. Most of the Central Valley California towns I visited on this trip were rough-around-the-edges and possessed an air of general economic despair, but the core of Visalia I found to be surprisingly vibrant. A brief photo tour, starting with a record store that was, unfortunately, closed on Mondays (marking the second day in a row my attempts to visit a local record store were thwarted). 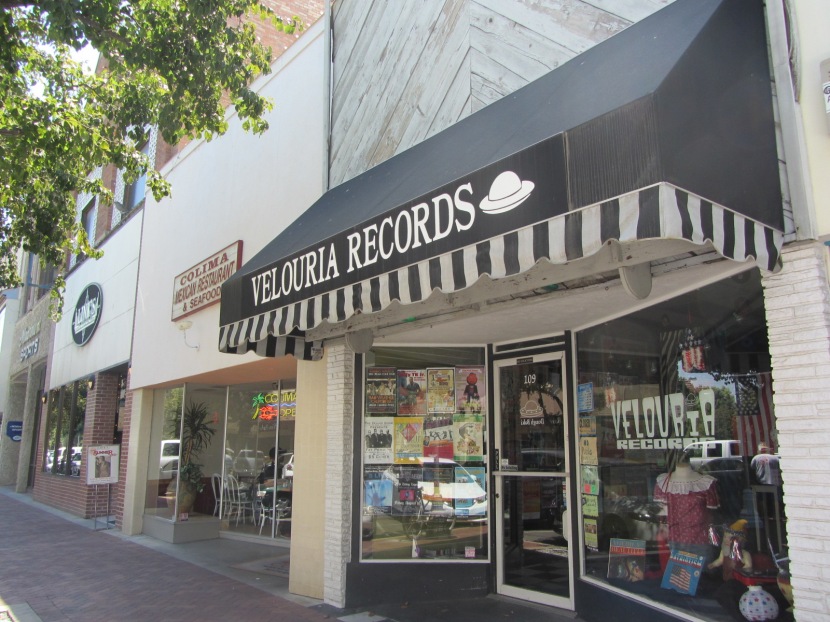 I was very taken with Visalia, but my momentary illusion that it was some sort of small town utopia quickly received a reality check.

Finally, a bit of history, delivered via the time honored method of plaque-on-boulder. 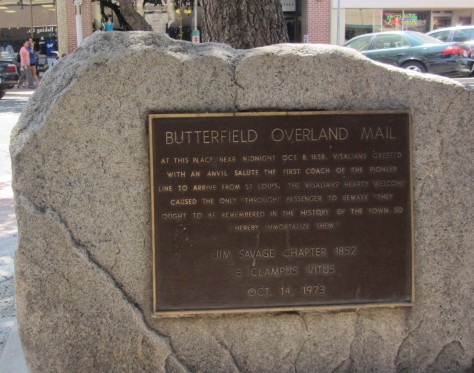 I didn’t get any lunch in Visalia. My next stop was Fresno, and in that city my first order of business was to go on a brief tour of notable area taco trucks. This tour, arranged by members of the Fresno Grizzlies front office, was covered extensively on MiLB.com. In brief, I had a really good time!

My time at that evening’s Fresno Grizzlies game has also been extensively documented. Among many highlights of my time at the ballpark was my encounter with this particularly committed “designated eater” (ie, the individual recruited at each ballpark to consume the gluten-free cuisine that my celiac disease prohibits).

The next day I made a pit stop at E. Olive Street in Fresno.

The motivation for this pit stop was the same as so many other pit stops that I make while on these road trips: I had been tipped to the existence of an independent record store. 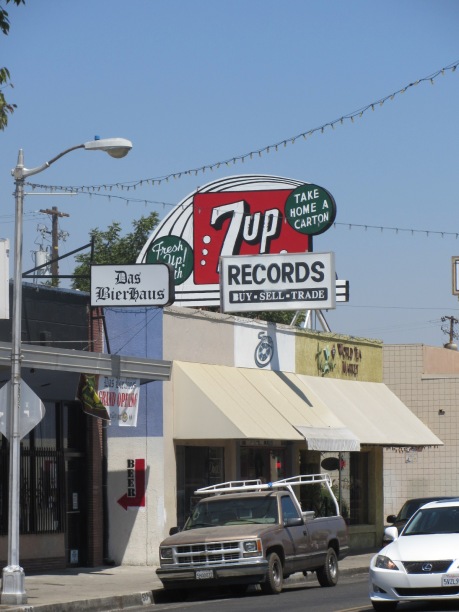 I picked up a few moderately-priced used classic rock LPs (Michael Nesmith, Humble Pie, Black Oak Arkansas), bantered with the friendly clerks for a bit, and then was on my way out of Fresno.

Next stop: Modesto, home of the Nuts. As is my standard operating procedure on these trips, I entered the ballpark while waving to my fans while riding atop a ’59 Corvette.

You can read all about my evening with the Nuts HERE. Part three of this series will pick up with my wanderings the next day in Modesto. A visit to a record store may have been involved.