Fun fact: Although just 20 years of age, San Antonio’s Wolff Stadium is the oldest ballpark in the eight-team Texas League.

Funner Fact: For the first eight seasons of its existence, Wolff Stadium was the newest ballpark in the Texas League. Its descent from “newest” to “oldest” occurred over a span of just nine seasons; Midland (2002), Arkansas (2007) and Tulsa (2010) built new ballparks for previously existing teams, while Frisco (2003), Corpus Christi (2005), Springfield (2005),  and Northwest Arkansas (2008) began play in new facilities after re-locating from elsewhere.

The Texas League, where change is the only constant!

I arrived at Wolff Stadium after a long drive from Midland, during which I got caught in rush hour traffic. I arrived at the ballpark around 6 p.m. (much later than originally intended), changed clothes in the parking lot, and then snapped this shot of the ballpark’s exterior.

Welcome to the Wolff, man: 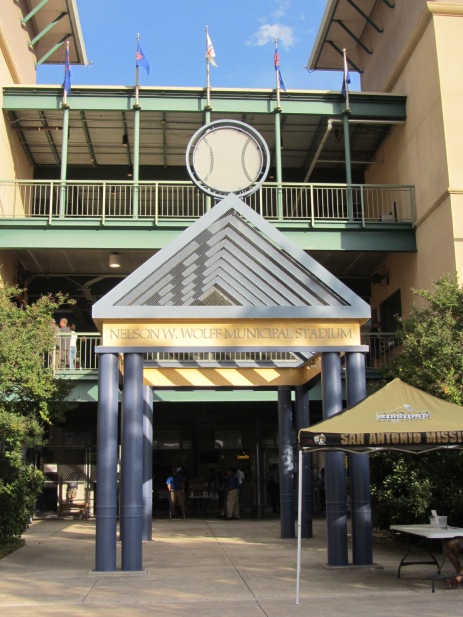 Wolff Stadium is located across the street (more or less) from Lackland Air Force base. This base serves as the sole location for Air Force basic training, meaning that impossibly fresh-faced recruits are a common sight at Missions games. The sounds of planes flying overhead has also led some (or at least one) to dub it “The Shea Stadium of Minor League Baseball.” (At Shea Stadium, planes flying in and out of LaGuardia airport lent the ballpark a certain acoustical ambiance.)

I was joined on this evening by one Jon Fischer, a San Francisco-based artist who recently completed a piece in which I am depicted blogging sans shirt.

Jon and I went to high school together (Wissahickon Class of ’97, for those keeping score at home). He was last seen on this blog at a Modesto Nuts game, eating meat-stuffed pretzels. Here he is upon entering Wolff Stadium, brandishing a brobdingnagian team-logo mug that was the evening’s giveaway item. (I now allow myself one use of the word “brobdingnagian” per season. Look forward to seeing the word again in 2015.)

Some stadium views, captured upon arrival. Though it was a Friday, the Missions drew a lackluster crowd due to the fact that the Spurs had a Game 7 playoff game that evening. When you’re a Double-A baseball team, it’s kind of hard to compete with a championship-caliber NBA team in the same market. But what can you do? 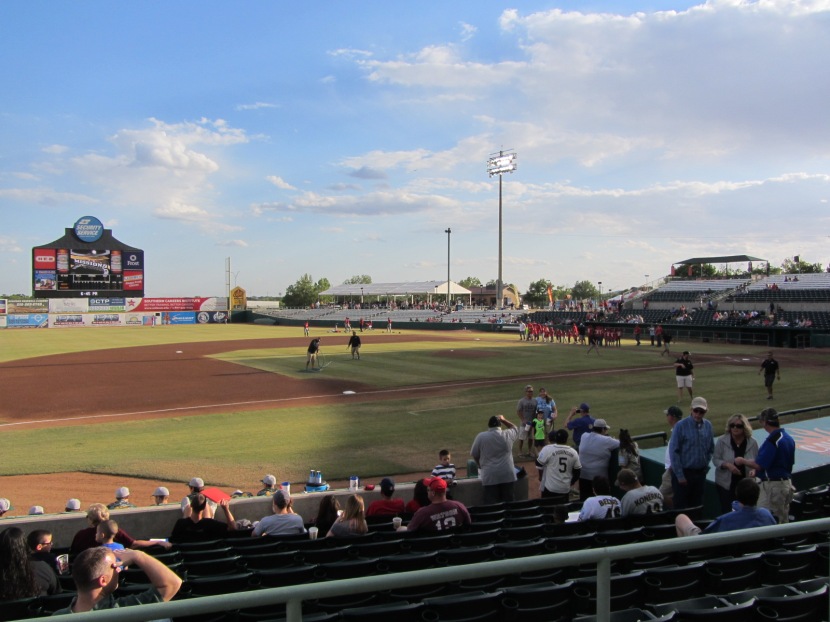 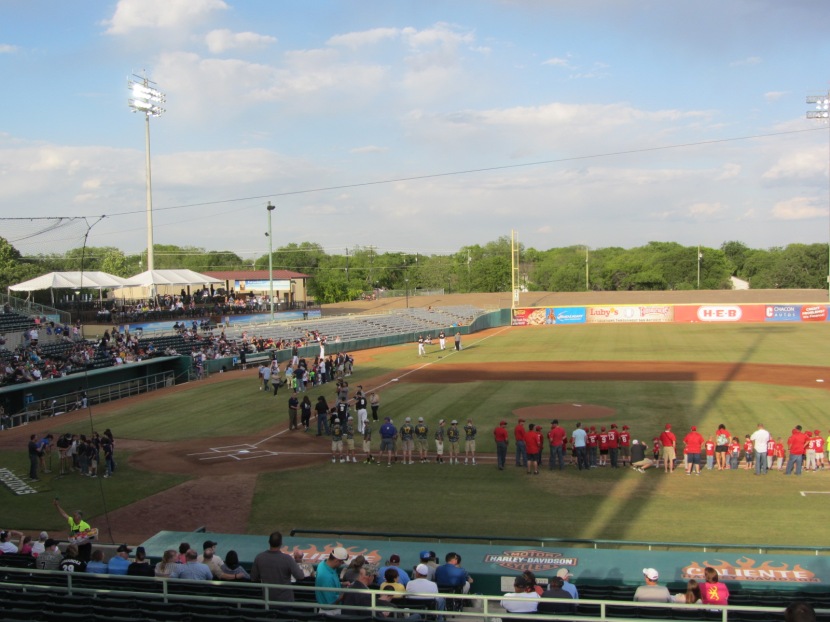 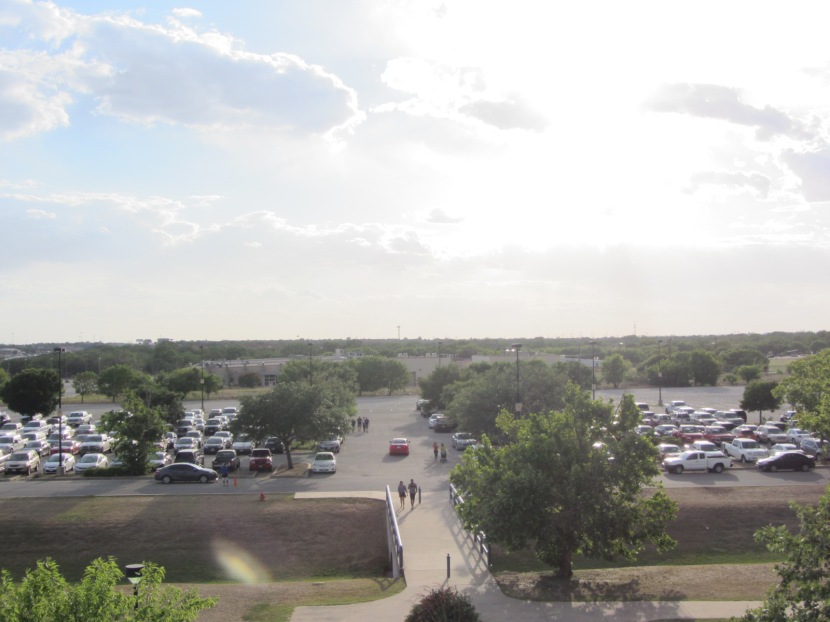 The National Anthem was adorable. For maximum enjoyment, listen to this at least 145 times in a row. I did!

I taped that anthem snippet in the press box, a domain occupied by shadowy figures. 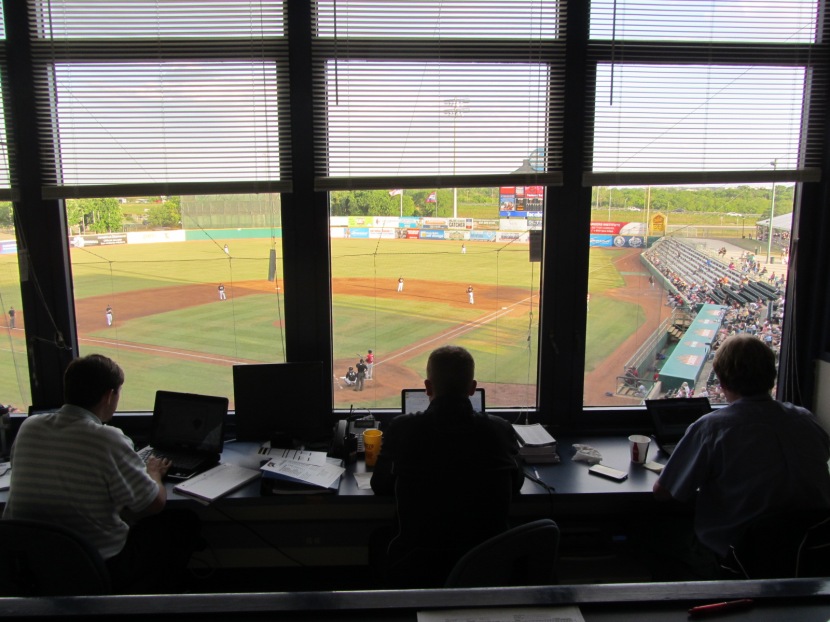 And while in the press box, I got my first glimpse of iconic Missions mascot Ballapeno. For more on Ballapeno and his arch-rival, Puffy Taco, read my MiLB.com article on the subject. I COMMAND YOU. 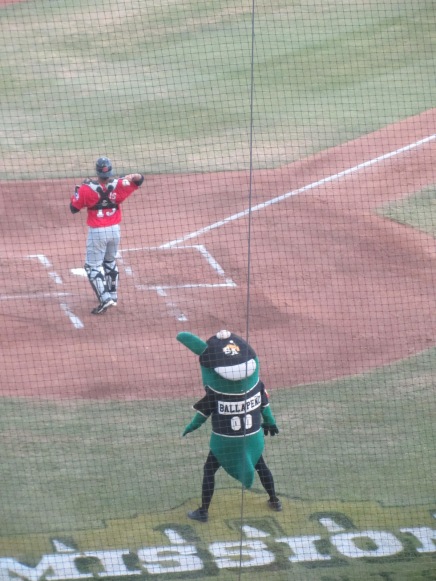 I also got my first glimpse of Alex Vispoli, broadcaster for the visiting Frisco RoughRiders. If broadcasters were ranked as MLB prospects in the same manner that players are, Vispoli would be high on the list. (Actually, wouldn’t that be a cool thing to do? But what methodology would be used? It’s a hard thing to quantify.)

My interaction with Vispoli was brief, for the game was ready to begin.

Following standard protocol, I did not settle in to watch the game. I commenced to wandering.

And in the course of that wandering, I soon ran into my designated eater for the evening (you know, the individual who eats the ballpark cuisine that my gluten-free diet prohibits).

That’s Darren Smith, who drove in from Austin for the occasion. “I just wanted to see a new ballpark and shoot the [shoot] about baseball,” he told me. Smith currently works for an Austin-area summer camp that specializes in outdoor education, but in a previous life he worked for the MLB  Urban Youth Academy in Compton as well as the Bradenton Marauders during their nascent years of existence.

After talking with the team, it was decided that Darren would sample the “Nacho Dog.” It’s nacho dog, it’s Darren’s. 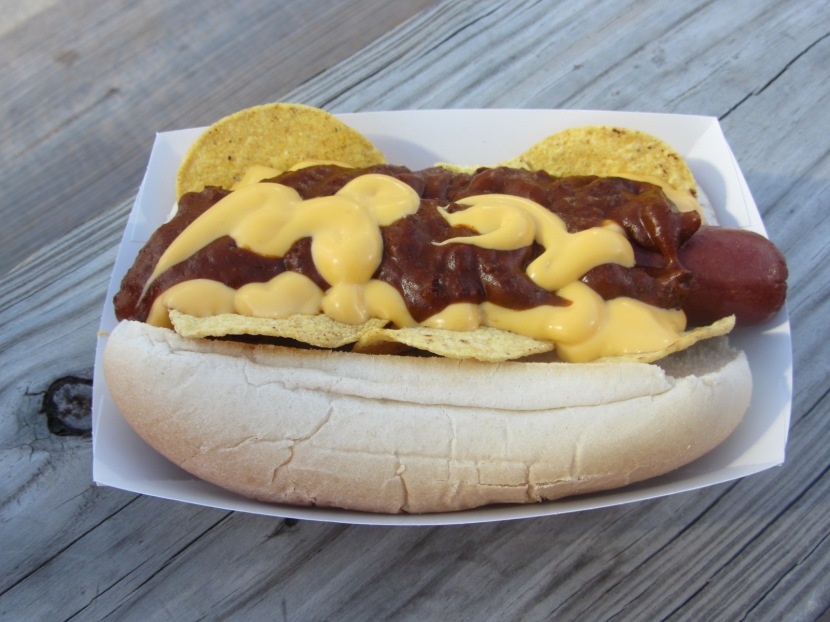 Have at it, Darren. 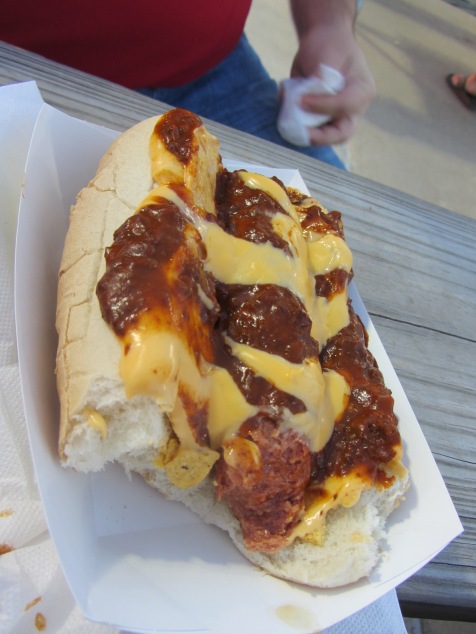 Darren was less than enthused with the Missions’ culinary concoction.

“The chili’s not great, the cheese is okay, but the bread is the worst,” he said. “It’s rock hard and cold. [Ballpark sponsor] Mrs. Baird’s is a Texas brand and you’d think they’d use that. The only thing that makes this a nacho dog is the chips, otherwise it’s a chili-cheese dog.”

We then stopped by Tony T’s Ballpark Treats, a third-party vendor, and got their signature Ribbon Fries.

Darren was a fan of these, lauding their look, crispness, and overall flavor.

I loved these (gluten-free!) creations as well. Tony T’s is a winner.

Fischer took the above photo, and he took this one as well. It is perhaps the most succinct summation of my professional career that one can find.

Darren, an expert when it comes to the Austin-area BBQ scene, opted for the brisket sandwich. He said that “In Texas, you know a place has good BBQ if they have a good brisket.”

Fischer, meanwhile, got a Hot Chop sandwich with Serrano peppers.

Oh, and a Frito Pie was involved somehow. 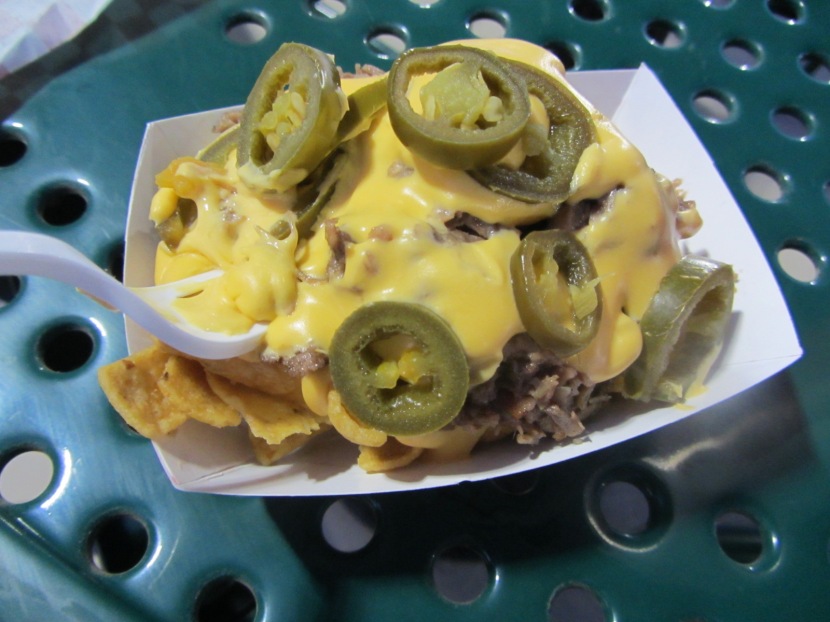 Have at it, guys.

In case you prefer your images of 30-something white men eating to be of the moving variety:

“I’m pretty sure that the bread here is Mrs. Baird’s,” said Darren. “By Texas brisket standards, this is at the level of a Dickey’s [a BBQ restaurant chain]. It’s pretty commercial, there’s no burnt stuff or smoke lines.”

And with that we bid adieu to Darren Smith, a tough but fair designated eater. I then re-commenced wandering.

Some two decades into its existence, Wolff Stadium is in need of a little TLC. This metal fence could use a touch-up, for example.

And this isolated area, located behind the berm, was just a dump.

But for the most part, Wolff Stadium gets the job done. It is neither old nor young, just plugging along and maintaining its status as a San Antonio summertime entertainment staple. 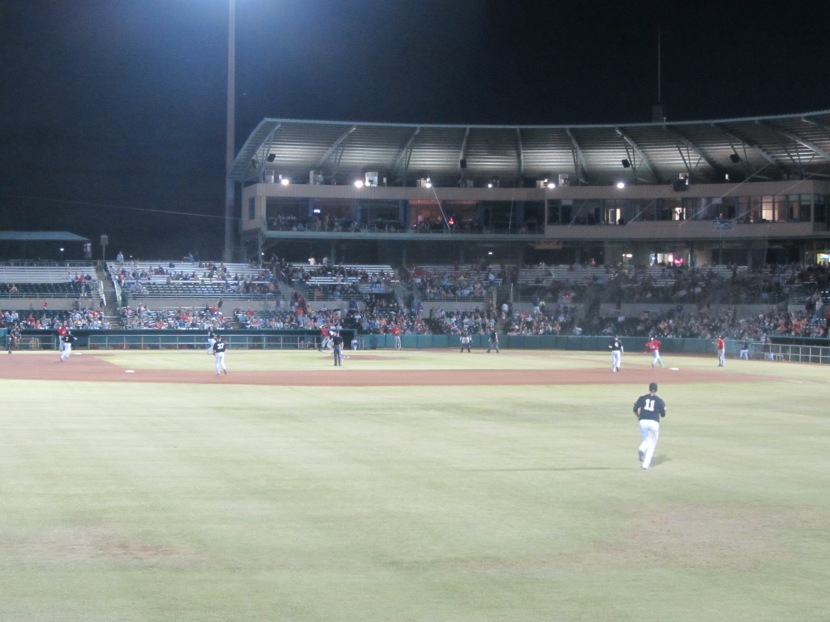 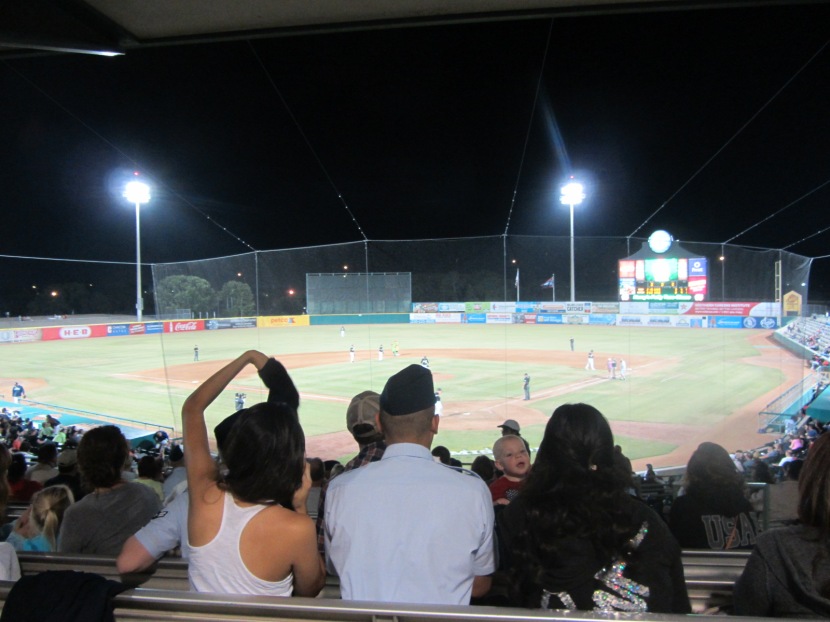 Of course, the aforementioned Ballapeno and Henry the Puffy Taco are a big part of the ballpark experience. Here, a gaggle of children chase Ballapeno across the field.

I really wish I had been able to properly capture this moment. Ballapeno, in the act of waving to a young fan, accidentally slapped  her in the face instead. The girl, more shocked than hurt, began to cry. In the below photo, Ballapeno is attempting to apologize, but, you know, it’s hard to apologize when you can’t talk.

But don’t worry about it, Ballapeno, as it was clearly unintentional. Get in touch if you need me to provide a statement exonerating you of any wrongdoing.

I was back up in the press box during Henry the Puffy Taco’s nightly humiliation. Not only does he lose every base path race, but the victor then stands upon him and gloats. Once again, my attempt to capture the action was subpar. (Everybody has their off nights, no matter what the job, and I had a blogging off night here in San Antonio).

Humiliated or not, Henry the Puffy Taco still loves to dance. 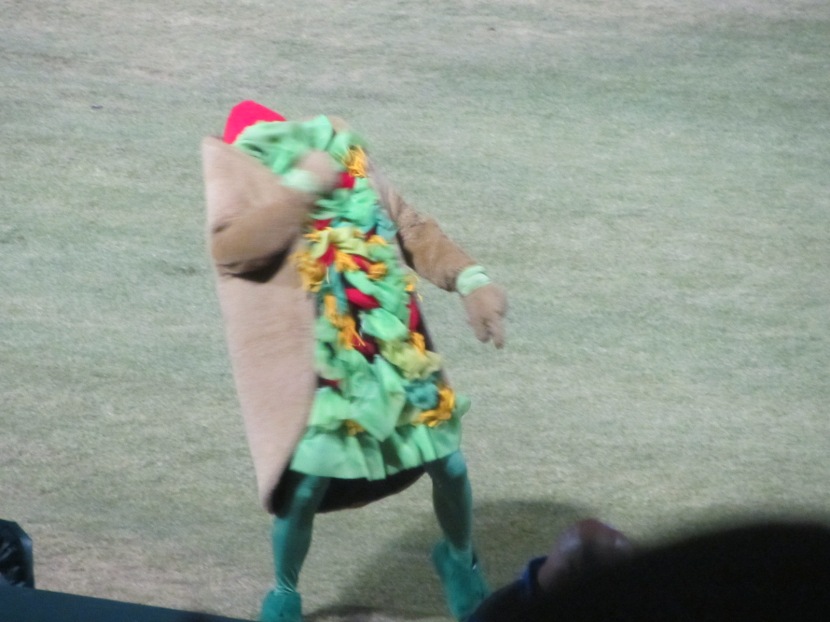 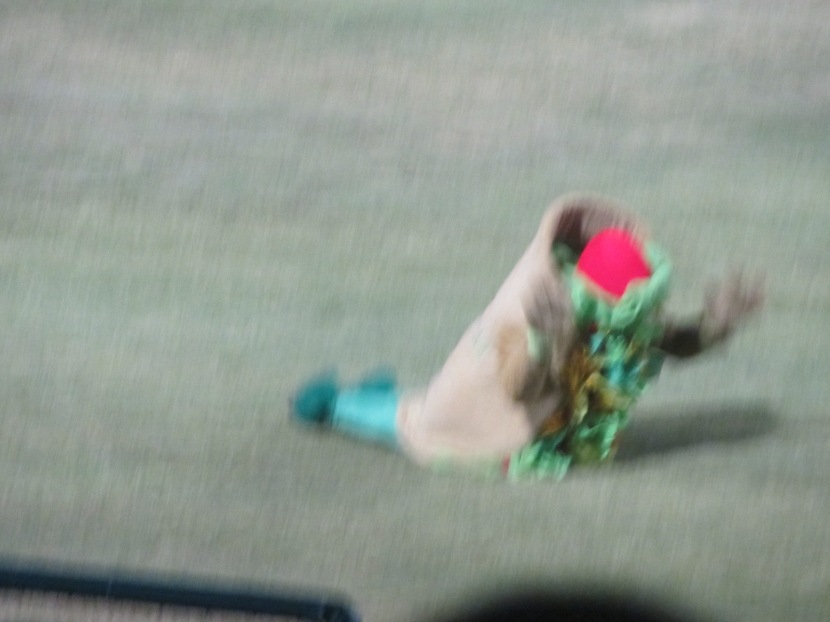 The game was moving rapidly, leading me to a sort of existential crisis. I’d been out and about and on my feet throughout, but what had I done? Anything? It didn’t feel like much, kind of like those recurring dreams I have where I’m at a ballpark in order to write about it but instead remain stuck in one place. (I really and truly have these dreams on a regular basis.)

But I wasn’t stuck, it was time to move. I had to get to the illuminated truth of this multi-tiered conundrum.

But all I found was that the game was over, and fans were now attempting to throw tennis balls into a chimney. Typical.

This was one case where people actually wanted to come down with the flue, but it was not to be. “Oh my God that was so close. Oh! Oh!” 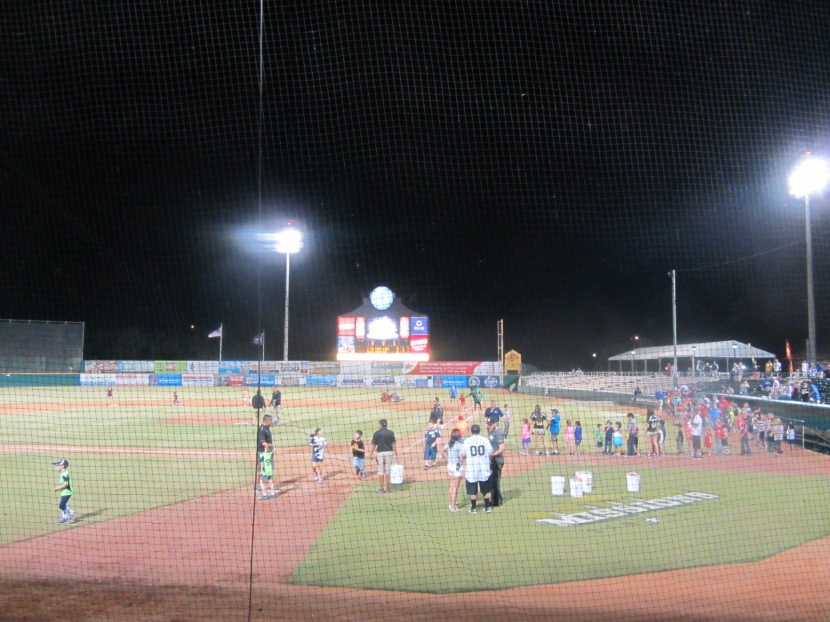 Good night from Wolff Stadium. Don’t forget to get an autograph on your way out.