Welcome to Crooked Nuggets, the lovable offshoot of my long-running “Crooked Numbers” column on MiLB.com. 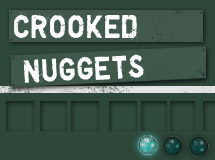 For the uninitiated, Crooked Numbers  is a monthly round-up of the the weirdest, wildest and most anomalous things to have occurred on a Minor League Baseball field. It was inspired by my childhood infatuation with the writings of Jayson Stark, whose work then ran in the Philadelphia Inquirer. 2014 marks the sixth season of the column; it is also the sixth the season in which the column has gone unacknowledged by Stark.

The May 2014 edition of “Crooked Numbers” appeared on MiLB.com on June 4 — check it out! — and this post contains even more instances of Minor League Baseball on-field weirdness. Let’s get to it, lest it get to us!

Let Crooked Reign — A left fielder and right fielder getting charged with an error in the same game is a rare occurrence. But much rarer is a left fielder and right fielder making an error on the same play. Tacoma Rainiers broadcaster Mike Curto witnessed, and then wrote about, this freakish occurrence:  “How can the LF and RF both make an error on the same batted ball? How could they even both touch the ball on the same play? The answer is: overthrows.” Click HERE to have Curto explain it all, as part of a blog post devoid of the Pavement references he is fond of making. All I can say is that this was certainly a play that did not “Brighten the Corners.” Both fielders should “Cut Their Errors.”

Stone is the Way of the Balk —   On May 9 the Bowling Green Hot Rods clawed back from a 10-1 deficit against the Lake County Captains, scoring nine unanswered runs in the seventh and eight innings to tie the game 10-10. But this impressive comeback was all for naught. Stone Speer entered the game for the Hot Rods with one out and the bases loaded in the 11th inning, and promptly balked in the winning run. He did not throw a single pitch in the ballgame.

Sweetest City in Alabam’ — The Mobile BayBears beat the Birmingham Barons on May 2, in a 17-inning ballgame that took five hours and 25 minutes to complete. Time-wise, this was the longest game in the 129-year history of the Barons. The teams combined to use 16 pitchers in the ballgame, with 14 appearing over the course of the final 10 innings.

Speed King —  The Birmingham Barons are the Double-A affiliate of the Chicago White Sox. Just one rung down the organizational ladder are the Winston-Salem Dash, who played their shortest-ever game this month. For more on this 108-minute tilt, hurry up and click HERE.

Stayin’ In — If you picked the Arkansas Travelers in your office’s “Last Minor League Team to Hit a Home Run in their Home Ballpark” pool, then congratulations! It took until May 10 for a Travs’ player knock one out of Dickey-Stephens Park, when Brian Hernandez accomplished the feat. As of this writing (June 18), the Travelers have hit just eight home runs at home. On the road, they have hit a comparatively Herculean but otherwise anemic 24.

Broken Home — The Travelers are one of four teams in the Texas League’s North Division, where no one seems to enjoy playing at home. All four clubs in the division finished the first half with a losing record at home. The winning percentage of all four teams was higher when playing on the road.

(note: I am not a fan of Papa Roach. They are one of the worst bands of all time.)

Celebrating our Smitherences — Per my MiLB.com colleague Tyler Maun:

While perusing the box scores [on May 16], I came upon this oddity: Hickory and Charleston played a DH, and three different Smiths recorded decisions.

Game 1:Save for Charleston’s Chris Smith

Your Josh Feldman Tweet of the Month — Feldman is the broadcaster for the Kannapolis Intimidators. Maybe this will be a recurring feature. Maybe it won’t be. But, anyway, check out Feldman’s observation regarding what Kannapolis pitcher Andrew Mitchell accomplished on May 18 against Hickory:

Weird stat from Sunday: In 7th, Andrew Mitchell threw 12 pitches (1 strike) and got out of the inning (C Jeremy Dowdy threw out 2 runners).

Movin’ On Up — During a late morning game on May 22, Addison Maruszak played right field for the Reading Fightin Phils. He was promoted later that day, and played third base for the Lehigh Valley IronPigs that night.

It’s So E-asy — On May 26, the Salem Red Sox committed seven errors and still managed to defeat the Potomac National by a nine-run margin. The next night the Red Sox made just one error against Myrtle Beach, but lost by six.

Whole Lotta LOB — May 27th was a tough night for Visalia Rawhide pitchers, as a half dozen hurlers combined to allow 19 hits and nine walks to the Bakersfield Blaze. Yet the Rawhide won the game, 11-9, largely due to the fact that the Blaze left a staggering 19 runners on base in the ballgame (at least one in every inning). Rawhide announcer “Devastating” Donny Baarns reports that:

And that, folks, is all I’ve got for the month of May. Thanks for getting crooked with me, and, as always, get in touch if you are a witness to the weirdness: