Back in April of 2013, a Ben’s Biz Blog reader by the name of Mike Bryan sent me an email that read, in part:

As someone who loves Minor League Baseball and collecting autographs as well as road trips I look forward to your posts. However, I’m disappointed that you are missing out on a great promotion not too far from your NYC location. If you do not have any Memorial Day plans I think you should schedule a trip to Bowie, Maryland and write about about the 1K beer run that [the Baysox] do.

I was unable to make it Bowie for the 2013 1K Beer Run, but invited Michael to write a guest blog post about it if he so desired. He took me up on this offer…eventually. This past May, 13 months after he first got in touch, he sent me a detailed recap of the 2014 version of the event. By this time I was on the road, neck deep in my own ballpark endeavors, and thus unable to find the time to run it here on the blog. But now here we are, in January of 2015, the depths of the offseason, and I finally find myself with the opportunity to post Mike’s Bowie Baysox 1k Beer Run recap.

May 4th was the first of two Bowie Baysox 1K Beer Runs for the 2014 season. It also happened to be the date for my fiancée’s bridal shower. Since the bridal shower was an all-girls event, I was able to head to Bowie with a couple of friends and my dad to participate in the wonderful 1K Beer Run.

The Baysox began this tradition last year; participants start by the first-base dugout and run, jog or walk around the entire baseball field. After completing the first lap you receive a beer to enjoy on your second lap around the field. However, if you are trying to win the race — which my friends and I were — you do not really enjoy the beer. We are all out of shape from our glory days of high school, so sprinting around an entire baseball field and then chugging a beer is no easy task. After completing your beer and the second lap, you are then handed another beer to enjoy or chug before finishing your final lap around the field. Once you have finished the race you receive your final beer to “enjoy.” 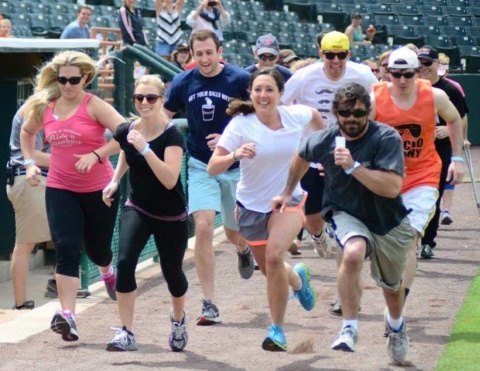 Having already participated in this event in 2013, I decided to employ a different strategy to try and win the run. Since I am not the best beer chugger in the world, I decided to simply shotgun the beers after each lap. Although for about 4-5 seconds I felt terrible, I was able to quickly get back to the running part of the race.

It was a three-horse race throughout the run and my friend Andrew Renison and I were able to pass another participant by the left-field foul pole as we were heading in for the final turn. Once we passed him it was a two-horse race and I was able to edge out a victory right at the finish line. Some may say Andrew let up to let me win, but we will never know.

As the winner of the event I was able to throw out the first pitch. Unfortunately, that did not go so well as I tried to throw it as hard as I could. It landed right in the dirt, and, as Bob Uecker likes to say, it was “just a bit outside.”

Despite the horrific first pitch we were all able to still have a good time at the rest of the game. Bowie won, 8-5, behind home runs by Christian Walker and Dariel Alveraz, two of the Orioles’ better prospects.

During the game we were able to enjoy the wonderful food and beer selections that the Baysox had this season. Over the last couple of years the team has really expanded their craft beer selections, serving local beers such as Loose Cannon and Flying Dog. In addition to the great beer selection, they have a couple of unique food items that we tried out. We had a hot dog stuffed with macaroni cheese and Old Bay seasoning sprinkled on top as well as an Old Bay sausage, which were both phenomenal. Then again, anything with Old Bay on it tastes great. 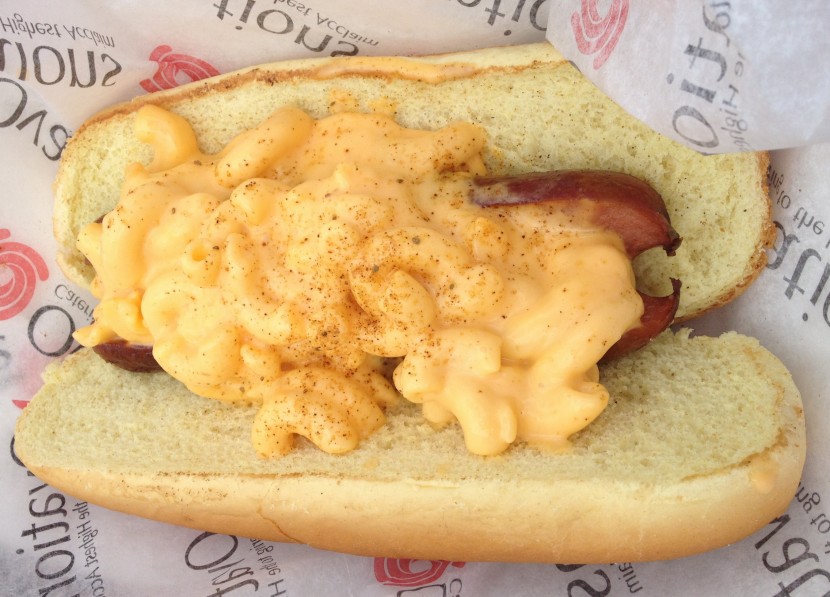 After lunch and some more beers we moved on to dessert. For our last meal we tried out some S’mores, which were one of the best desserts I have ever had. The best way to describe them is “similar to a S’mores Pop Tart, but better.” 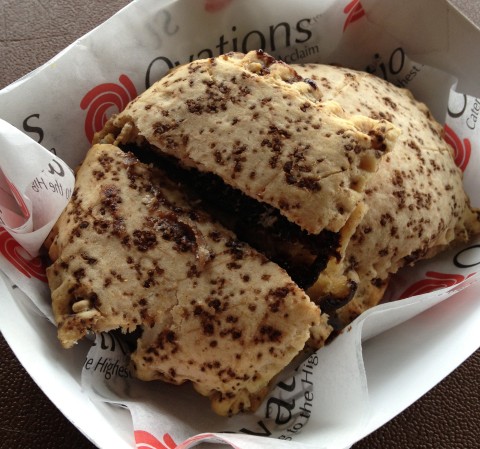 Unfortunately I was not able to defend my title for the next race, on June 21st, since I was on my honeymoon. But I’ll definitely participate again next year and look forward to you visiting Bowie on one of your next road trips as well!

A big thanks to Mike for taking the time to write this guest post. For the record, I did visit Bowie on a 2011 road trip; hopefully I can make it again in 2015.