As I have often mentioned, the offseason content on this blog can be characterized as an ongoing battle between the old and the new. The urge to share new Minor League initiatives and ideas must do constant battle with the desire to give belated coverage to that which I didn’t get around to writing about during the season itself.

But why must this dynamic always be framed in oppositional terms? Today’s post represents an attempt at reconciliation, so that the old and the new may transcend temporal concerns in favor of taking up residence within the eternal now. It’s a perfectly logical approach.

The Rocko’s Love Bites Pack is $55 and perfect for the downtrodden on what can be a quite depressing holiday. This lonely hearts package includes four SINGLE game General Admission Baysox tickets to enjoy by yourself, a Baysox Foam Claw signifying your ripped out heart, a Black Baysox Mini-Bat to fend off any nearby happy couples, six black balloons to denote your singular unromantic status, and a pint of ice cream with a special Baysox bowl to help alleviate your sorrows.

But that’s not all, for Rocko will also help those in unhappy relationships hit the killswitch.

Fans can have the frustrated fish do the dirty work for them and deliver his Love Bites Pack within 25 miles of the stadium to help you part ways with a significant other.

If anyone takes Rocko up on this offer, then I have but one request: Make sure you get it on video.

Remember back in June when the Potomac Nationals hosted a “Beard-A-Palooza” weekend in honor of Jayson Werth? 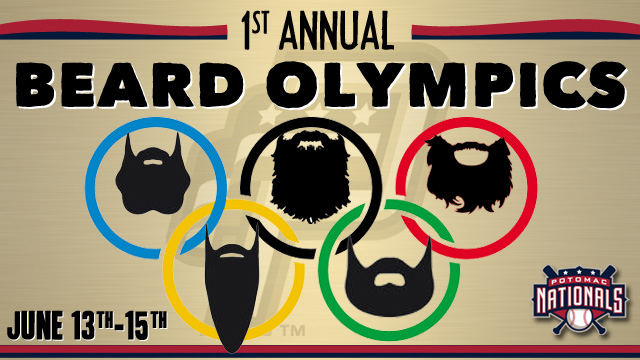 Well, I have obtained photos of the festivities (by “obtained” I mean the team sent me some). Here, a pair of front office staffers engage in a beard-tasting competition.

To the victor go the spoils:

Once again, to the victor go the spoils (maybe this guy won because his opponent, upon further review, was deemed to not have had a beard in the first place):

This old and new coexistence experiment seems to have gone pretty well. I think I’ll do it again in the near future. In the meantime, make sure to check out the new edition of “Ben’s Bookshelf” over on MiLB.com. It features three highly-recommended Minor League Baseball-themed books: