If you’ve been keeping up-to-date with this series of Florida ballpark posts, then you know there has been a recurring culinary theme: Florida State League concessions don’t go too far beyond the basics.

This is more or less true at the Brevard County Manatees’ home of Space Coast Stadium, although the team does have a few wild cards on the menu.

On the Friday evening that I was in attendance, they also offered this:

My designated eater — you know, the individual who consumes the ballpark foods that my gluten-free diet prohibits — was one Enrique Cortes. 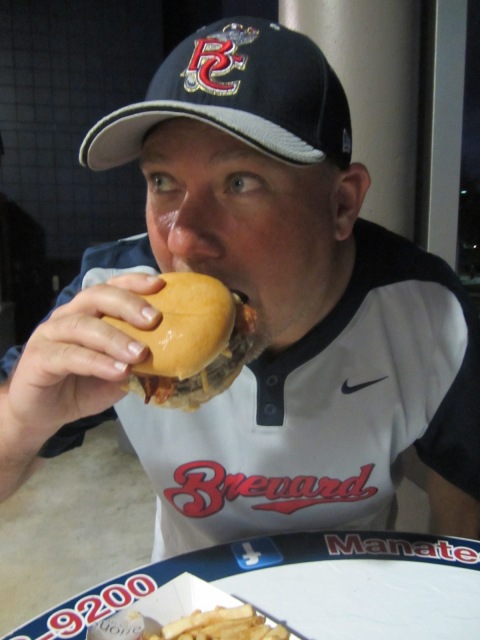 I wish I had a picture of Enrique that showed him in a non-eating pose. But, as I mentioned in my previous post, I was off of my game during my evening in Brevard County. The opportunity, it passed me by.

Anyhow, Enrique was attending the game with his wife, Lynette, and their son Enrique Jr. Enrique Sr. has been an art teacher at Palm Bay Elementary School since 2002. After graduating college with an art degree, he said that his master plan was to “get into the museum side of things.”

“I thought I’d just teach for a little bit,” he said. “But I never left. I enjoy it. You get to draw with kids all day. You can’t beat it.”

Enrique also serves as a coach for his son’s “machine-pitch” team, and he regularly attends Manatees games at Space Coast Stadium as well as Major League games in both Tampa and Miami.

As for why he wanted to be a designated eater, Enrique said that “I thought that it would be different, a new experience. I’m always looking for new experiences in the baseball world.”

Okay, great. But my issue was finding the ideal point in the evening for Enrique to get this experience. He was flexible, and my plan was to coordinate with the Manatees’ staff so that Enrique could be given a nice spread of concession stand highlights. This was not to come to fruition, as the front office was running around like maniacs (read the previous post to find out why) and the concession stand was slammed all night long.

By the time the seventh inning stretch rolled around, it was time to take matters into our own hands. Or, more accurately, Enrique took matters into his own hands. He corralled a coterie of Palm Bay East Little League players — it was Little League Night at the stadium — so that they could star in this rollicking Vine video.

Coach Cortes and Palm Bay East Little League at Manatees game. I promised them @MiLB would retweet this. https://t.co/txMZqAvwKA

Enrique and I then visited the Grand Slam Grill, ordering the “No Wake Zone Burger” from a no-nonsense, exhausted-looking woman with a name tag that said “Margot.” The game was nearly over at this point; we were fortunate that the concession stand was still open, and here we were ordering some convoluted new special item. Margot shot us an “Are you kidding me?” look before asking, “Do you know how to dial 911?” 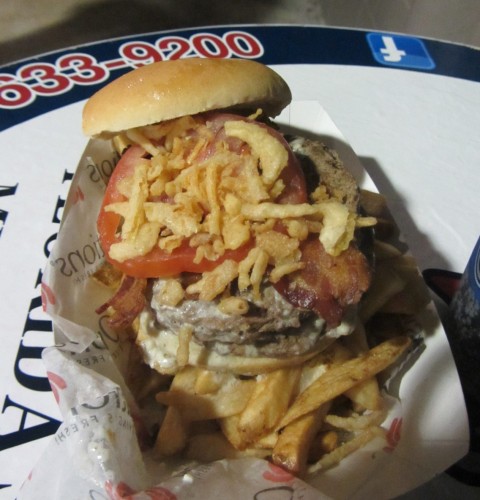 Have at it, Enrique. Have at it:

Nearly a month has passed, and I’m not quite sure what he meant by that last part.

“This is definitely something I would enjoy eating again,” he concluded. “I’d pay the extra bucks for it. There’s the saltiness of the burger, the crispiness of the onions. Good burger.”

Oh, and just so that I don’t get excoriated by all of the merciless #cupdate fiends out there, here are some pictures of the Manatees’ current collectible cup. 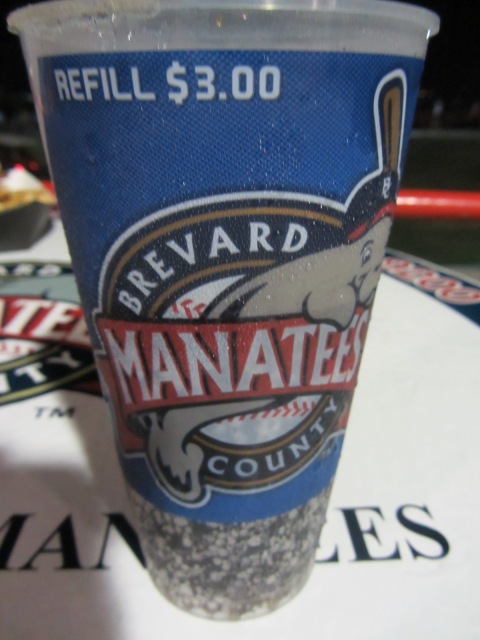 And that does it. Literally, as at this point in the evening the game was over.

I’ll let Enrique have the last word. Given that the Manatees’ long-term future in Brevard County is uncertain, he had this to say:

“I hope the Manatees stay in Brevard County. I hope they don’t have to move. I fear the worst. I’ve enjoyed the past 21 years; I was here when they first started. I’d be sad to see them go. But it’s baseball, and it’s a business. I just want Enrique Jr. to have a team to root for.”