I don’t really want to get into it, “it” being the seemingly eternal stadium debate that surrounds Richmond’s The Diamond. The facility, a massive concrete slab conveniently located just off Interstate 95, opened in 1985 and hosted the Triple-A Richmond Braves from that season through 2008.

The Braves departure was largely due to their dissatisfaction with The Diamond’s increasingly dilapidated condition. The Flying Squirrels came to town two years later (having relocated from Norwich, Connecticut),  wanting to take advantage of the robust Richmond market but also making it clear that the construction of a new ballpark was a prerequisite of the relocation.

But here we are, in the year of our Lord 2015, and The Diamond is still going strong. Or, at the very least, it’s still going. This is one resilient slab of concrete. (As for the new stadium, it’ll happen eventually. The ups and downs and twists and turns of that saga could fill a book and one day might. The Flying Squirrels’ habit of leading the league in attendance has, paradoxically, hurt the cause. “If it ain’t broke, don’t fix it,” say proponents of the status quo.)

When I visited The Diamond, it was not with the intent of adding to (or detracting from) the ballpark debate. I simply wanted to see it for myself. And as regards that unambitious goal: Mission Accomplished!

As you can see, The Diamond resembles a gigantic spaceship. But most spaceships don’t have oversized inflatable Flying Squirrels — that’s Nutzy to you — displayed in close proximity to them. Furthermore, spaceships are almost always devoid of whimsical entrance signage such as the “Squirrely Gates” seen in the above photo. 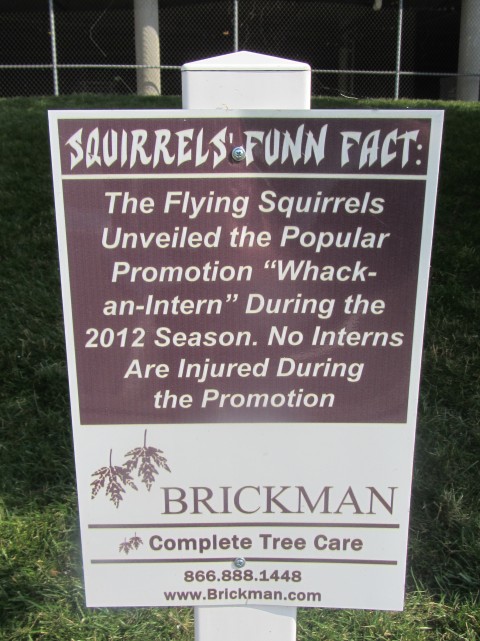 Perhaps Brickman Complete Tree Care has something to do with the stadium’s well-manicured exterior. 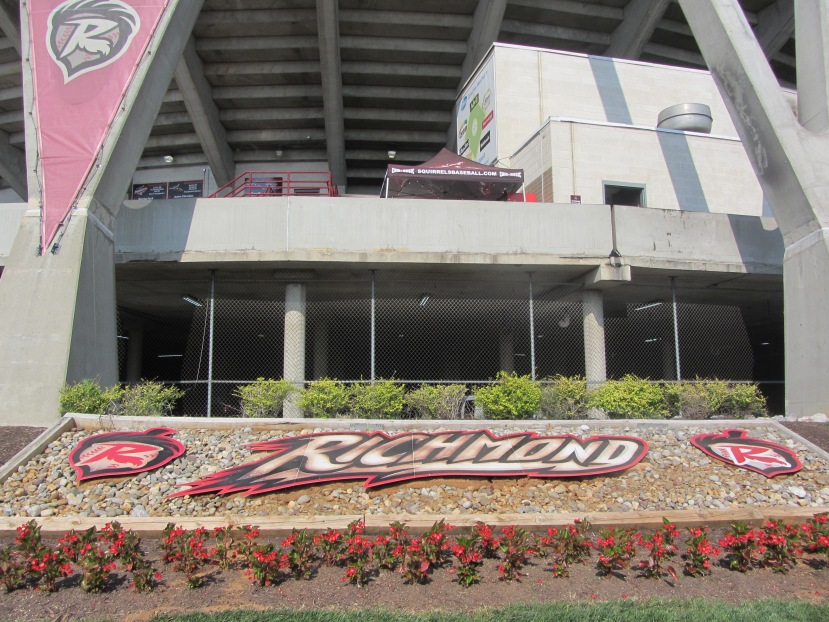 The impeccable landscaping efforts continue down this walkway…

…where one finds a succinct visual rundown of the costumed characters that can be found within. 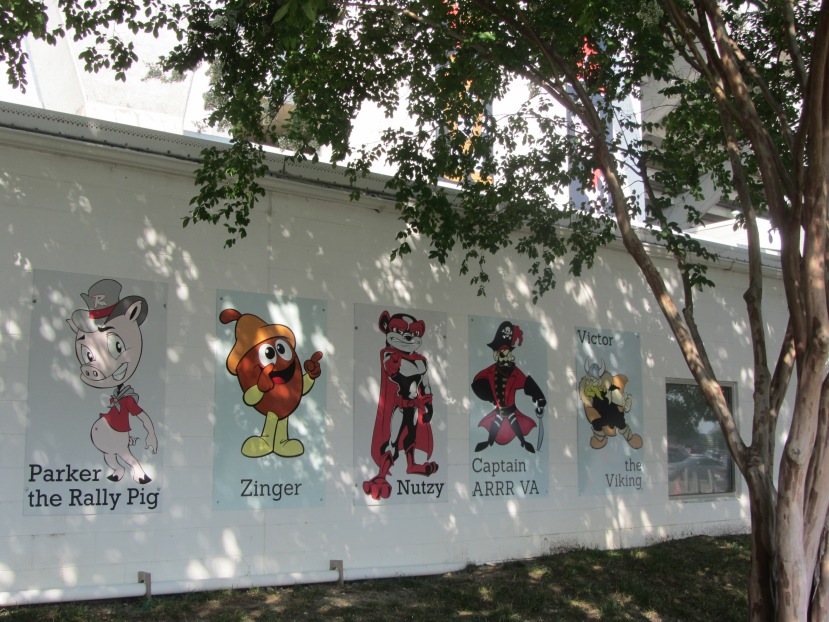 The above stable of characters — three of whom I would go on to meet later in the evening — are overseen by this character: 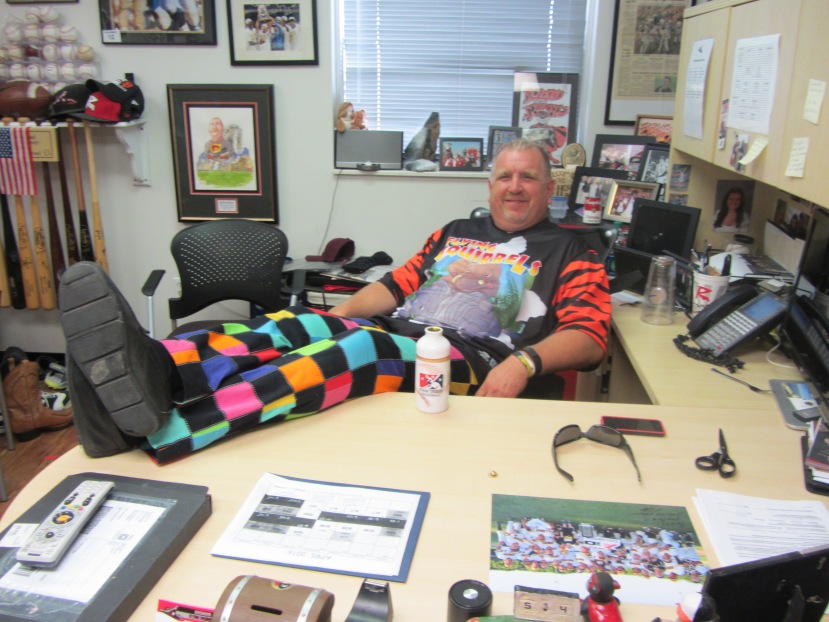 That’s Todd “Parney” Parnell, Flying Squirrels vice-president and well-known industry raconteur. He’s one of those Bill Veeck kind of characters — always upbeat and boisterous, apt to be the first one at the ballpark even if he was the last one at the bar the night before. The “office” seen above is really a re-purposed storage room (or something of that nature), located directly across from the home clubhouse. If you know Parney, then you will not be surprised whatsoever that a makeshift bar is part of the set-up.

Thanks to Parney’s largess, the home clubhouse has a Golden Tee arcade game sitting just outside its doors.

This subterranean locale also doubles as a parking lot, for the players as well as for various team-owned vehicles. That’s one sweet Kubota, is it not? 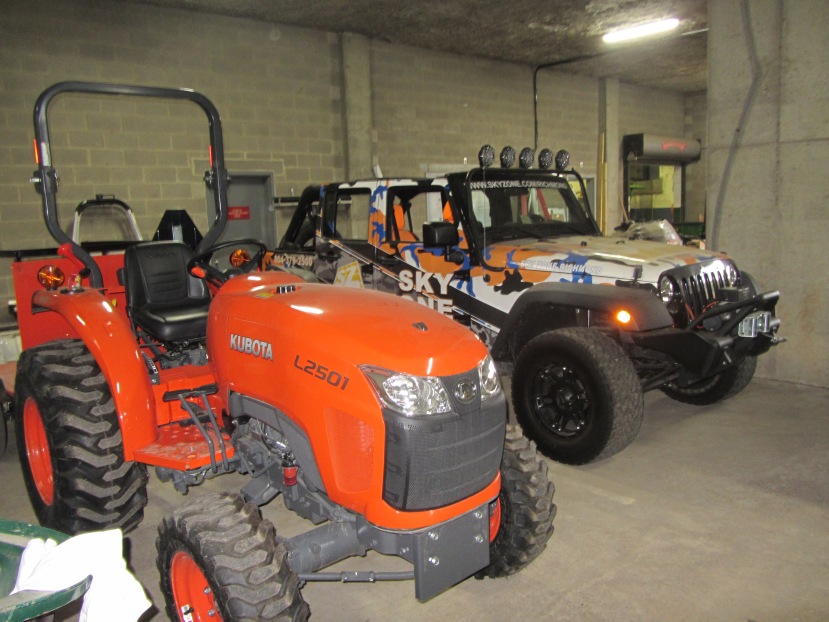 Oh, and a pig lives down here. Parker the Rally Pig, specifically. 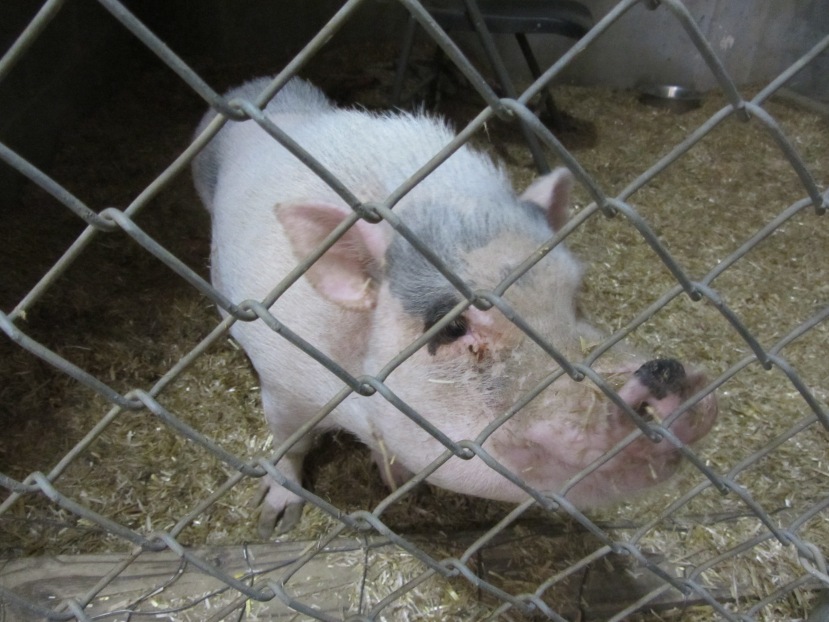 Parker has an outdoor home as well. We’ll see more of him elsewhere within this blogging saga.

Remember, like, five photos ago? When I posted an image of Parney? In that photo he is wearing that night’s “Jumanji” theme jersey, the centerpiece of a “Many Faces of Robin Williams” promotion.

You know who else was wearing one? Me, as in Ben’s Biz, as in that niche blogger extraordinaire. 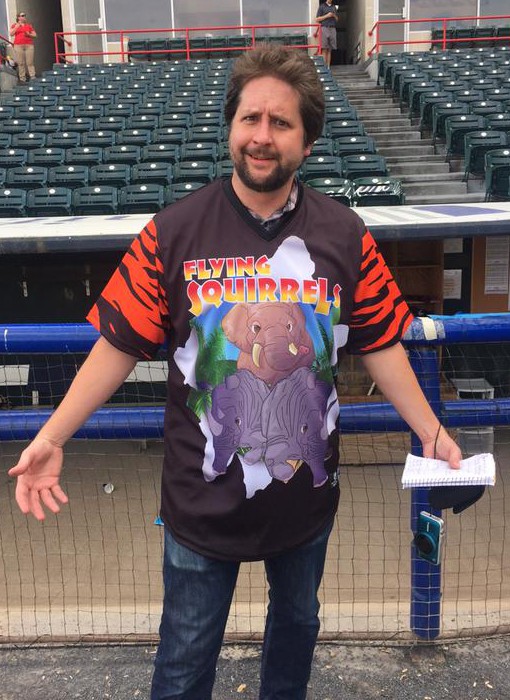 As the time that photo was taken, the gates had not yet opened. The Diamond, like a nihilistic interpretation of existence, was a vast sea of emptiness. (The sponsored banners laid across the uppermost sections have reduced seating capacity, which still stands at a spacious 9500.)

Out on the concourse, it should be noted that carnival games are named in honor of the team’s top brass (Chucky, in this case, is chief executive manager Chuck Domino). More teams should follow the Flying Squirrels lead in this regard, because kids love Minor League executives and always pester their parents for money whenever they see any kind of entertainment option that features Minor League executives. 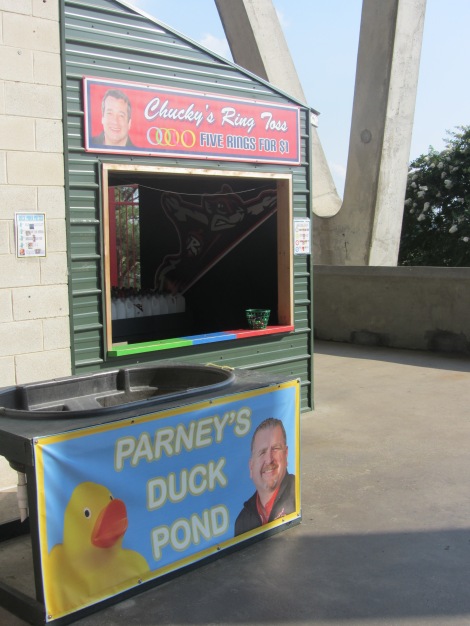 The team store used to be a restaurant. Noted. 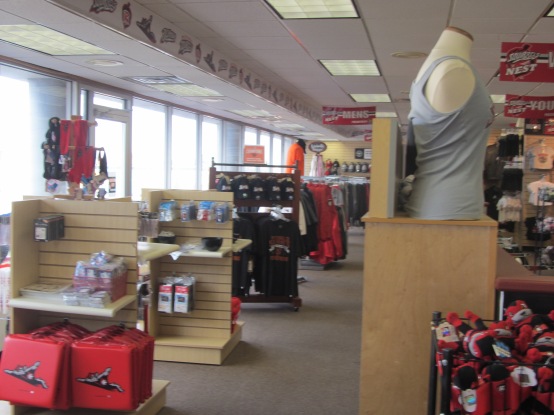 The main concourse of The Diamond is located on the stadium’s second level (field level consists of storage areas, the clubhouses, batting cages, Parker’s pigpen, Parney’s pigpen, front offices, etc.) There is also a third-level upper concourse, accessible via staircases such as the above. 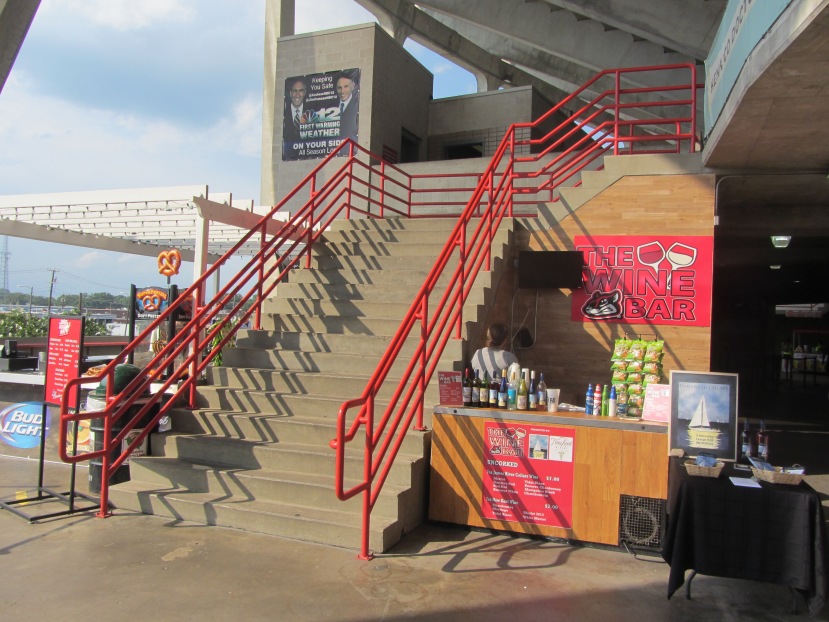 The press box is accessible via the upper level concourse. Most of its denizens had already enjoyed a pregame meal courtesy of Bojangles fried chicken and biscuits.

Jay Burnham, Flying Squirrels media relations director and soon-to-be lead broadcaster (current lead Jon Laaser recently accepted a job as voice of the Hokies) was feverishly preparing for what would surely be another stellar broadcast.

Not wishing to disturb a broadcasting professional, I tiptoed back down to field level. 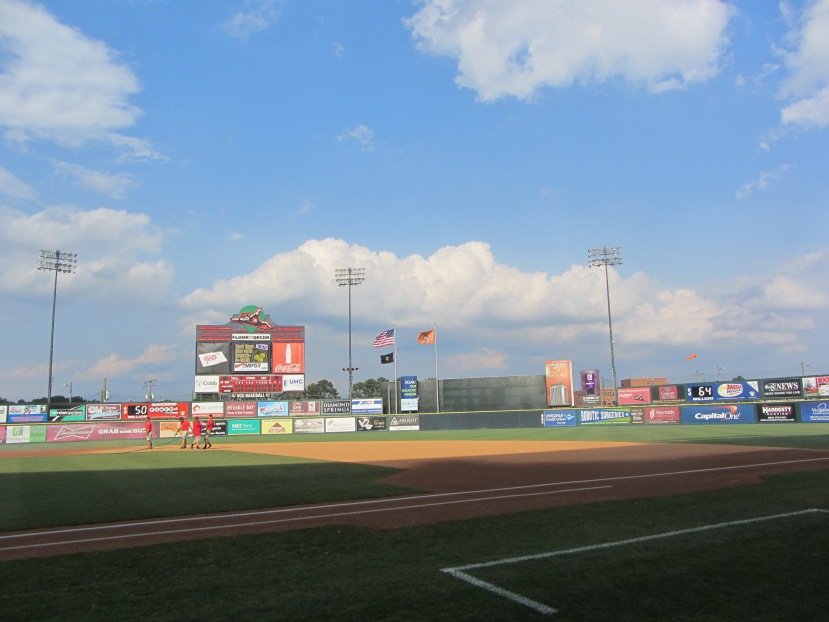 This time around, the field was less deserted. First of all, I made the acquaintance of on-field emcee Mike Murphy, better known simply as “Murph”. Murph, decked out in his finest Jumanji regalia, had a microphone in his pocket and seemed happy to see me. 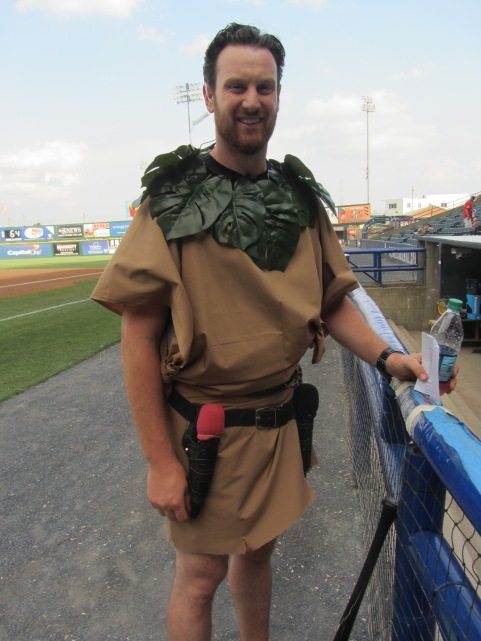 And, hey, look, it’s Nutzy, just back from the gym. No theme night attire needed for this guy.

For Nutzy, it was time to fly off to parts unknown. For me, it was time to descend into the dugout and conduct an interview with Flying Squirrels reliever Phil McCormick. 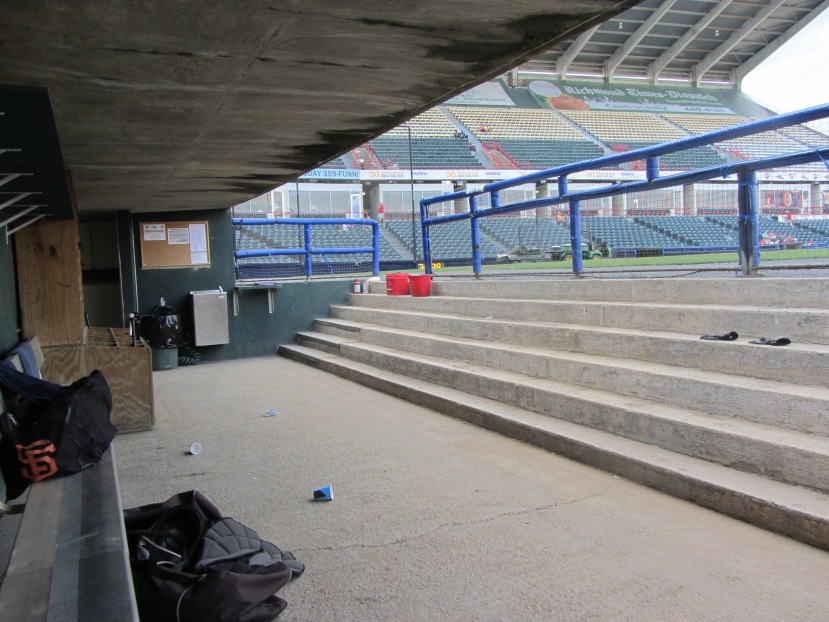 I usually don’t interview players for normal reasons, and this was no exception.

Earlier, when I was in the press box, Burnham had tipped me off to the existence of a recently created Flying Squirrels music video entitled “Biagini in a Bottle.” The song, a parody of Christina Aguilera’s “Genie in a Bottle,” is a tribute to pitcher Joe Biagini sung by McCormick as writhes around in a purple onesie.

My first pitch was so bad, in fact, that the weather turned awful as soon as I threw it. God sees all, and He was displeased.

And so, to start the evening, a rain delay it would be. Would this be the end of my Richmond Flying Squirrels experience? Or will I somehow milk two more posts out of it? Only time will tell.