The longest baseball game in professional history was played at Pawtucket’s McCoy Stadium. The 33-inning affair began on April 18, 1981, continued into the wee hours of the 19th and was finally, mercifully, completed on June 23. Undoubtedly, this was the most monumental event to ever take place at McCoy Stadium.

The second-most monumental event occurred on September 1, 2015. On that evening, as the PawSox played the Lehigh Valley IronPigs, one Brian O’Connell served as my designated eater.

All designated eaters should have credentials

As designated eater, it would be Brian’s task to consume the ballpark cuisine that my gluten-free diet prohibits. As you can see from the above picture, he’s in good shape and doesn’t appear to be the sort of guy who gorges himself on concession stand fare. But he was up for the challenge.

“I’ve got no issues with it at all,” he said. “I ate healthy earlier today, so no worries.”

Brian is a Providence native who now lives in nearby Swansea, Massachusetts. He works out of Providence as a legal admin, and is also a soccer journalist whose work appears on the the website nesoccertoday.com. (In my notes this read “anysoccertoday.com,” which would be a good resource for those curious about game times and what not).

Brian’s soccer fandom came about later in life, but he’s been a baseball fan since birth. He played throughout his childhood, and started attending games at McCoy Stadium from the time he was seven years old. He was an intern for the PawSox in 2001, and said that the craziest thing he witnessed that season was this immortal Izzy Alcantara meltdown:

When it comes to their food offerings, the PawSox are significantly less crazy than an enraged Izzy Alcantara. Eric Petterson, the team’s director of concessions, said that the basics are king. Hot dogs, supplied by Kayem, are the number one offering at concourse stands such as these.

But with all due respect, hot dogs are boring. Brian and I, with crucial assistance from Eric, decided to highlight the PawSox’s regional specialties instead. We began with clam cakes, which Eric called “the quintessential New England fried food. And this is the quintessential way to serve it, in a white paper bag.” 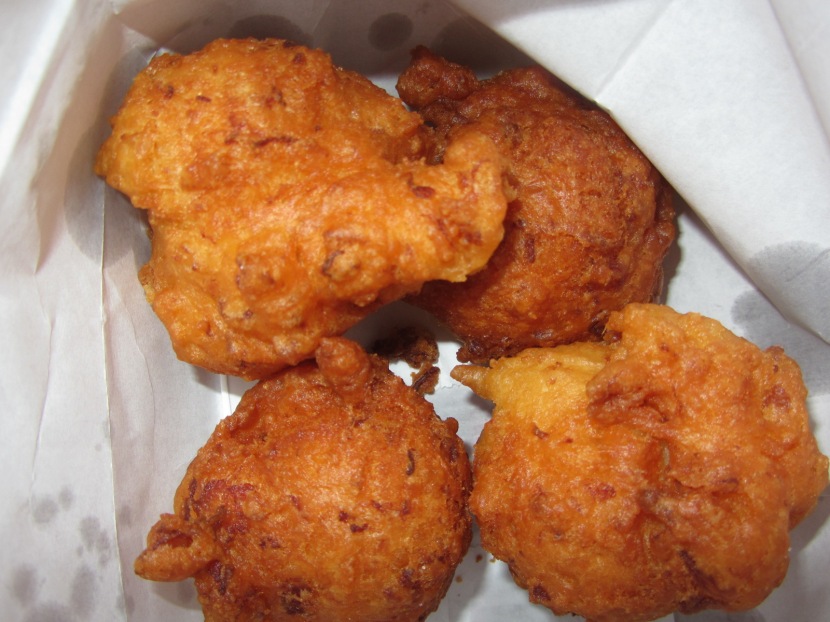 The clam cakes are supplied by Blount, a Rhode Island-based clam shack with four area locations. The only thing more quintessentially New England than eating Blount clam cakes out of a white paper bag is dipping said clam cakes into a cup of Blount clam chowder.

Brian was excited to try this time-honored combination.

“It’s a good pairing,” said Brian. “The crunch of the clam cakes to go with the thickness of the chowder. It’s like a sauce. One complements the other, perfectly.”

Brian washed down his clam combo with Del’s, a regionally-beloved brand of frozen lemonade. I’m not sure why he looks so concerned about doing this.

“Del’s is definitely a southeast New England thing, specifically a Rhode Island thing,” said Brian. “If there’s an official beverage of the state, then it would probably be Del’s. Well, that or coffee milk. I’ve been told that if you go across the state line and ask for coffee milk, they think you’re asking for milk in your coffee. You don’t have to venture far to find people who have never heard of it.”

I was intrigued by this tangent, as I had never heard of “coffee milk” either. And, sorry Del’s, but Wikipedia informs me that coffee milk actually is the official state drink of Rhode Island — “a sweetened coffee concentrate called coffee syrup [added] to milk in a matter similar to chocolate milk.”

We move on from that piece of information to a piece of pizza.

PawSox pizza is supplied by Portland Pizza, which Brian called “an upgrade over Papa Gino’s.” I’ll let you Rhode Islanders out there (all couple dozen of you) argue that one out.

But no matter what the brand, it’s better to eat pizza off of a plate.

Despite being an upgrade over Papa Gino’s, Brian said that this slice “left a little to be desired.”

“It could have more flavor,” he said. “It could be a little zestier.”

We were gonna call it a night after the pizza, but Eric suggested that Brian eat some fries.

“Nothing’s number one in front of hot dogs, but the shoestring fries are a signature item,” he said. “You can get a lot for not a lot of money.” 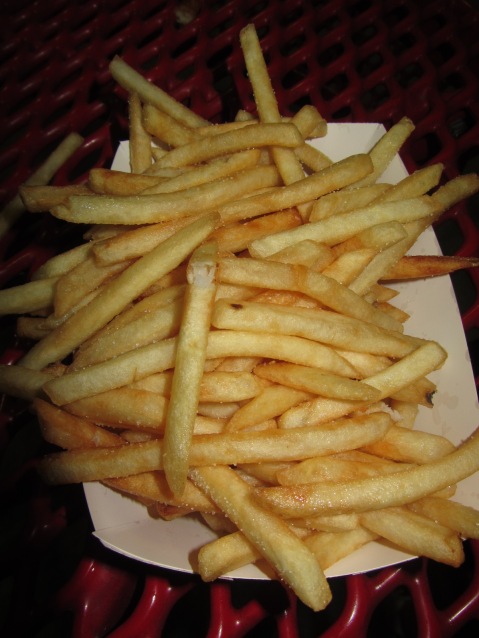 Brian’s appetite only seemed to be growing. He was a voracious eating machine.

“The fries are always salty, but they’re some of the best around,” said Brian. “They’re crispy and light at the same time. But now I definitely need a drink.”

After taking a hearty swig of Del’s, Brian gave his final thoughts on the PawSox designated eating experience.

“It was great. I didn’t even know about the clam cakes and chowder. Blount’s is somewhat famous and I didn’t expect that it would be here. That was a good move. They are a super local staple.”

“They’ve got to hire one of those guys who lines ’em all up on his arm.”

The future of PawSox concessions? Brian can dream. 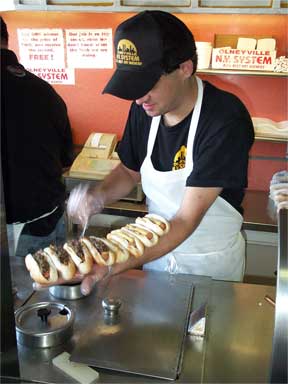