There are seven Minor League Baseball teams in New England, distributed with admirable equity on a state-by-state basis. There are two in Connecticut and one each in Rhode Island, Massachusetts, New Hampshire, Vermont and Maine. I have already documented my ballpark visits to all of the teams in all of these states, save for one.

Did I save the best for last? You tell me.

Tonight, my 2015 “On the Road” season ends with the Maine event: Hadlock Field, home of the @PortlandSeaDogs

Yes, my ballpark travels culminated in Portland, Maine. Not only was Hadlock Field my last stop of the 2015 season, it was also the last Eastern League team I had yet to visit. When I arrived at the ballpark, it was with a sense of satisfaction, exhaustion, anticipation and sadness. It was all going to end here, at a ballpark that opened in 1994 and has hosted the Sea Dogs ever since. (The Sea Dogs were one of two Eastern League expansion teams in 1994; this expansion was a result of the Florida Marlins and Colorado Rockies joining the MLB ranks.)

Slugger the Sea Dog has some serious musculature in that left arm of his, as he is able to perpetually hoist up a bulky electronic sign without breaking a sweat.

If one were to turn around 180 degrees, and look in the same direction that Slugger is looking, one would see a tableau similar to the following. Hadlock Field is located in Portland proper, just off of route 295, west of the heart of downtown. 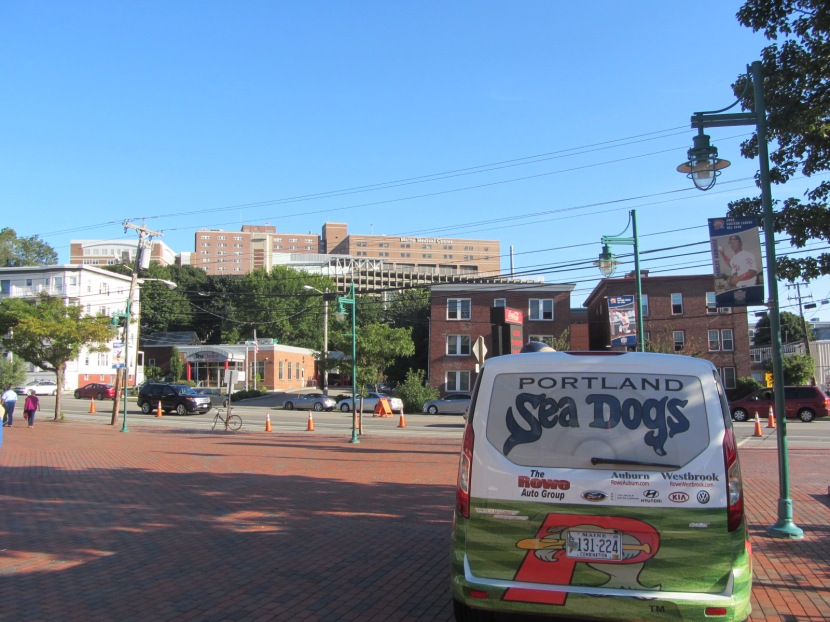 Just down the street, on the first-base side of the stadium, stands a statue of a different sort. This, the work of sculptor Rhonda Sherbell, is called “American Baseball Family.” It was installed in 2007, and the source of at least one hilarious and oft-maddening Baseball Think Factory thread.

I think the Dad has gotten fed up for some reason, and now trying to sell the tickets to a more baseball-worthy family. The boy is like “Are you kidding me?” while Mom has her hands full to the point where she doesn’t really care one way of the other.

Mom just can’t seem to shake that Teddy Bear from her palm. That thing must’ve been coated with adhesive.

Upon arriving, I was welcomed as a visiting celebrity should be welcomed.

My logo was designed by Sean Kane. The Sea Dogs logo was designed by cartoonist Guy Gilchrist, who is probably best known for writing and drawing Nancy. It just occurred to me that “Sluggo” is a key character in the Nancy strip, and Slugger is the Sea Dogs mascot. I think some sort of Nancy and Slugger mash-up is in order. How about it, Mr. Gilchrist?

Hadlock Field’s outfield is a colorful cornucopia of props, signage and seats. On the far right in the below photo, mostly obscured, is a pavilion featuring Fenway-emulating “Monster Seats.” There is also an inflatable L.L. Bean boot, installed atop the elevated outfield bullpens. 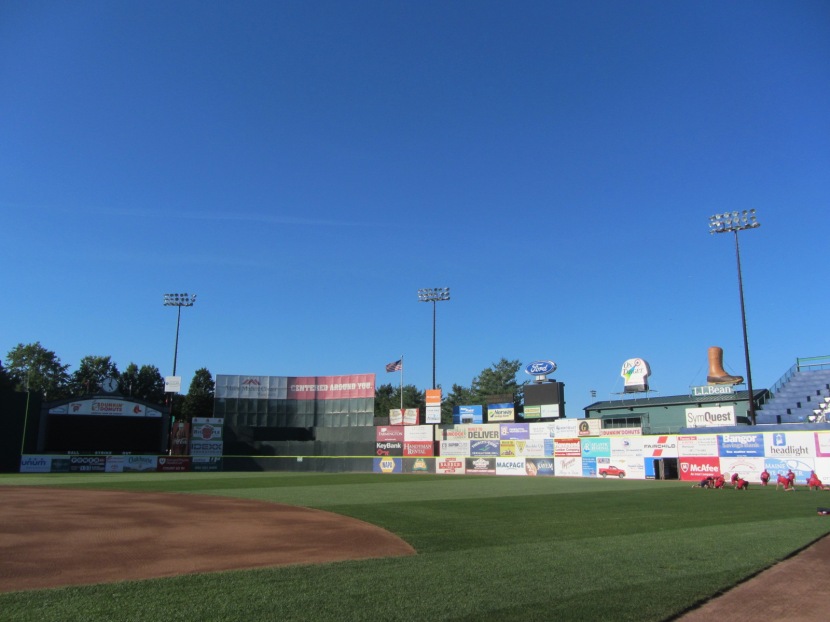 Here’s a closer look at the boot. Note that a pitcher is warming up in front of the “SymQuest” sign. There is also a sign for Bangor Savings Bank, and who knows? Maybe that’s where Stephen King keeps his money.

From 1994 through 2002, the Sea Dogs were a Marlins affiliate. This made sense — the Sea Dogs owe their existence to MLB’s 1993 expansion — but was obviously less than ideal. The team became a Boston affiliate in 2003, however, and this obviously was ideal as Portland is most certainly a part of Red Sox Nation.

Hadlock Field’s “Green Monster” was added prior to the 2003 season in celebration of the affiliation; the Sea Dogs’ Monster is the same height as Fenway (37 feet) and even includes the names of Sea Dogs owners Dan and Bunny Burke in Morse Code on the scoreboard (the Yawkeys are immortalized similarly at Fenway). Dan Burke died in 2011, and his son Bill now serves as team chairman. Former Eastern League president Charlie Eshbach, the 2013 “King of Baseball,” was the Sea Dogs’ first employee and team president. 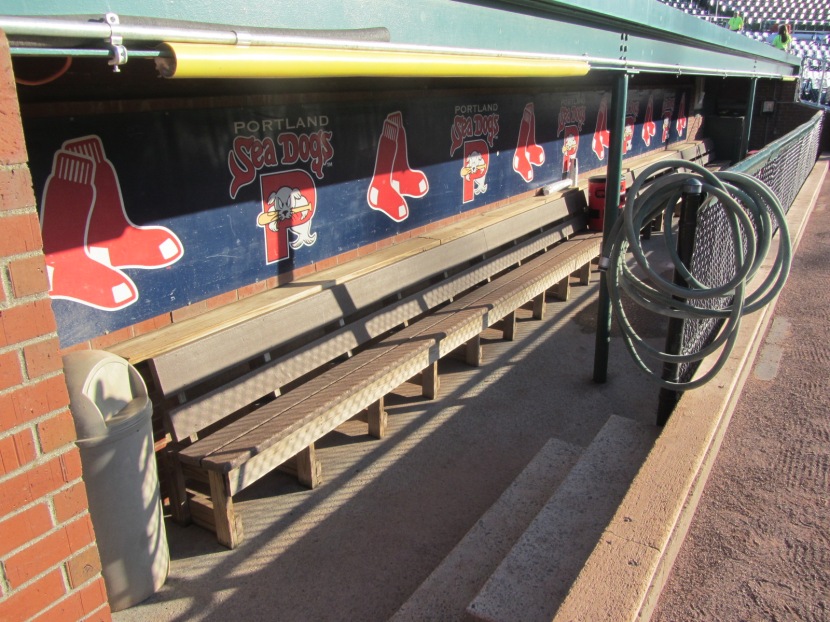 …except that there is a toilet located at the far end (as in the end closest to first base). I don’t think I’d ever seen a toilet in the dugout before. Usually the closest one is in the clubhouse, or in the tunnel leading to the clubhouse.

When it comes to the best dugout in MiLB, Portland is either #1 or #2 https://t.co/vc4Sexvfmj

At first I thought that Slugger was reprimanding me for taking video and photos of the dugout bathroom.

But it turns out that he was just Voguing.

Strike a pose, there’s nothing to it

Before leaving the field for less-greener pastures, I interviewed Sea Dogs pitcher Matt McCarthy about his charity work in general and involvement with Baseball Miracles in particular. It’s a worthwhile story.

Meanwhile, the gates had opened and fans were streaming into the concourse. It was the Friday of Labor Day weekend, and the number of fans wearing shorts and a long-sleeve shirts illustrates summer’s transition into fall.

The Friday of Labor Day weekend was a pretty good night to attend a game, but, of course and as always, it wasn’t the best game that I could have been in attendance. If I had only come two days later, I would have witnessed the Sea Dogs’ signature “Field of Dreams Game.” The players, wearing 1926 Portland Eskimos uniforms, literally emerge from a cornfield en route to mingling with the fans and thanking them for their support.

Nothing of that magnitude was going on this evening, however. Dustin Pedroia was being inducted onto the team’s Wall of Fame, but this was done in absentia as Dustin was otherwise engaged in Boston. Sea Dogs media relations director Chris Cameron, who was very helpful both before and during my visit, can be seen in the plaque’s reflection. Hi, Chris. 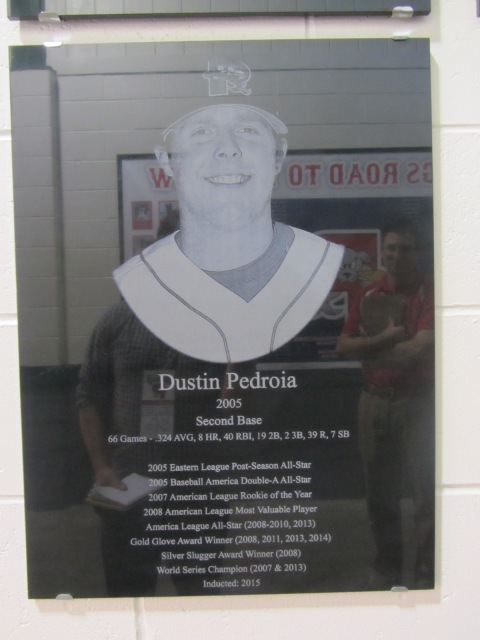 Dustin is one of many Sea Dogs to have made it to the Majors. This list is alphabetical; knuckleballer Charlie Zink is the last one on it.

And as for Hadlock Field itself? It was named after a local high school baseball coach.

Meanwhile, back out on the field, the game was rapidly approaching. Patriotic songs were in the process of being sung. 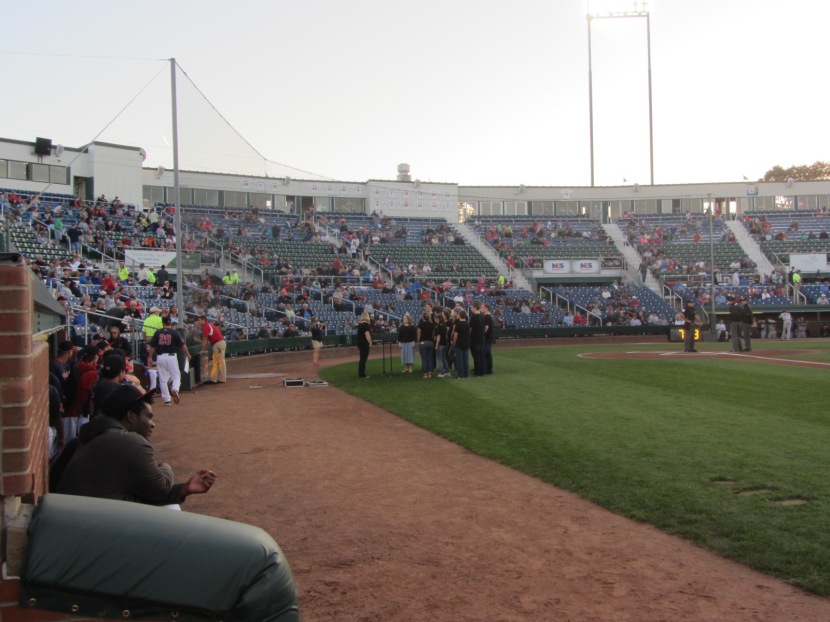 And then it was time to play ball.

Hadlock Field is beautiful, and there is still much more to come. My 2015 season in blogging ain’t quite done yet.