It’s time for another installment of “Return to the Road,” in which I document the non-ballpark wanderings that occurred during my 2015 road trips. I’ve already chronicled my experiences in Florida and the Midwest; now it’s time to move on to my late June trip to Virginia (and the state west of Virginia. I forget what it’s called).

I arrived in Richmond on the evening of June 24, having driven there from good ol’ NYC (where the cost of living is totally reasonable and never causes me angst). Before heading to The Diamond for the June 25 Flying Squirrels game, I had a little time to poke around. And when I poke around, I inevitably end up at a record store.

First up was Deep Groove.

Deep Groove was a small, all-vinyl spot. If I recall correctly, I bought the recent reissue of Guided By Voices’ classic Bee Thousand album. I also recall that on the counter, under glass, was a great assemblage of Richmond-area concert ticket stubs spanning the last three-plus decades. One of the stubs was for a D’Angelo show that had taken place the previous week; this prompted me to tell the clerk that I had seen D’Angelo play in Queens just three days prior.

“That’s tight,” replied the clerk, who was completely disinterested and also young enough to use “tight” as a synonym for “cool.” I left the shop feeling like a pathetic old dude, but then I started thinking about this D’Angelo song and the pep came back into my step.

I then pep-stepped, feeling not at all dyspeptic, to bustling West Carey Street. I believe that the locals call this neighborhood “Carytown.”

Would you believe that I ended up at another record store?

Plan 9 was much larger than Deep Groove, and far more ramshackle. There was a little bit of everything. It was tight.

Usually, when on a road trip, I bring along three CDs I haven’t listed to and listen to them three times each. I should probably be diagnosed with something. But on this trip I had forgotten to bring any CDs, so I went ahead and bought a few at Plan 9 so I could listen to them in the car for the rest of the trip. My new acquisitions were Willie Nelson and Merle Haggard “Django and Jimmy,” AC/DC “Rock or Bust” and Shamir “Ratchet.” I also picked up a used copy of Don Cherry’s “Eternal Rhythm” on vinyl.

All right, enough with the record stores.

Please note that, at this moment in time, the Byrd Theater was showing Insurgent and Get Hard. I don’t know anything about either of those movies, but they seem unbefitting to a theater of such age and (assumed) grandeur.

I also enjoyed wandering through Chop Suey Books, which had multiple levels and many rooms. This photo was taken on the second floor, where I found (and bought) a used paperback of Damon Runyon short stories. 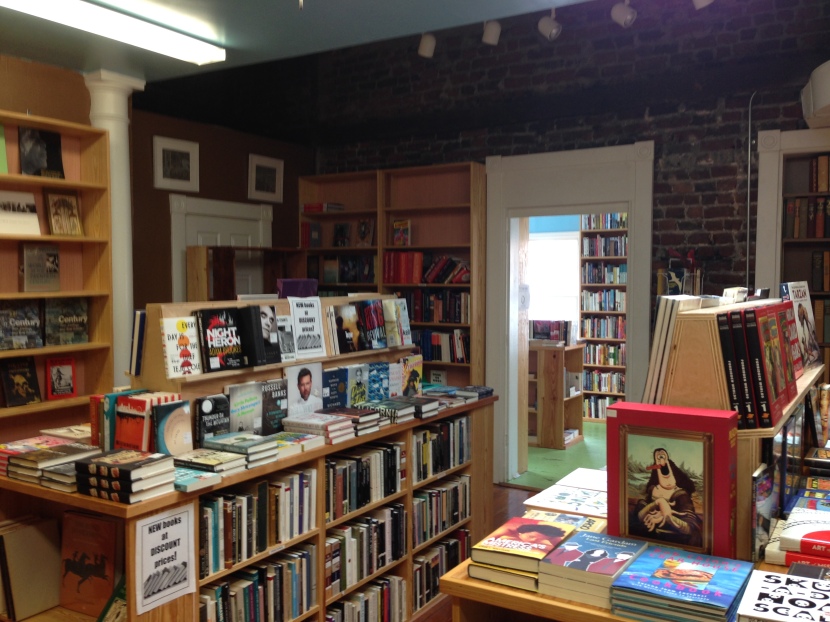 WonTon was indeed resting in his natural habitat.

Early the next afternoon, before leaving Richmond for good, I returned to Carytown and got lunch at the Daily Kitchen. Three side dishes make a meal!

I wasn’t dining alone, for the Daily Kitchen is not the type of place in which I would eat alone (it was crowded and chic, so my self-consciousness levels would’ve been through the roof). My companions were Richmond Flying Squirrels broadcaster Jay Burnham and his Trenton counterpart, Adam Giordino. Jay used to work in Trenton, and Adam was the one who replaced him. 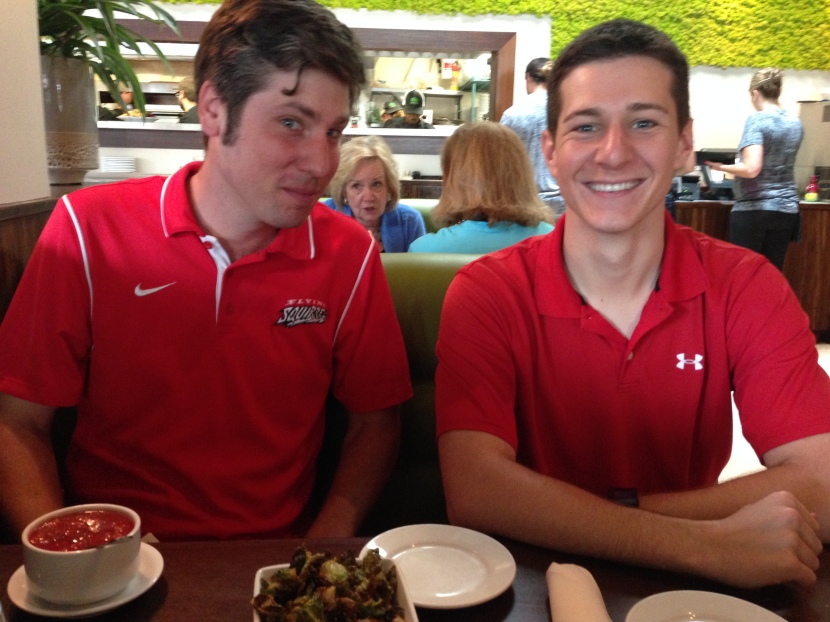 It was cool spending a couple of hours with those guys, which included a brief automotive tour of Richmond courtesy of master chauffeur Jay Burnham. But all good things must come to an end, and thus I was soon on the road to Norfolk with only a new CD to keep me company.