Hello, and welcome to the latest installment of “Return to the Road.” Yesterday’s post detailed a few highlights of my time in New Orleans from July 27-29. On the 29th — a Wednesday, for those keeping score at home — I drove approximately 90 miles northeast to Biloxi. I was in Biloxi for two nights but, unfortunately, spent very little time in the city itself outside of MGM Park and a nearby hotel.

I did poke around the area a little, but let’s back up a bit. During the Shuckers game on the 29th, I met local restaurateur Brad Orrison. He’s the co-owner of The Shed, a barbecue located in nearby Ocean Springs that also has a stand at MGM Park. 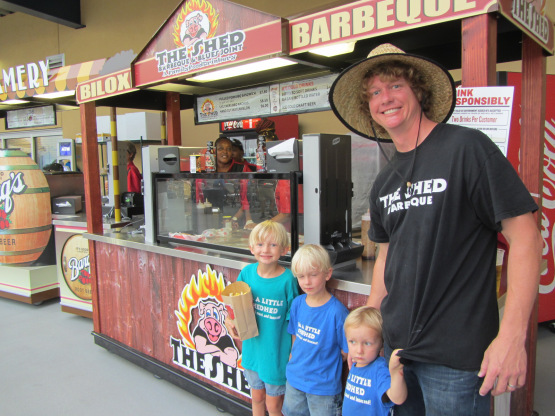 Brad Orrison and his little “Shed-Heads.”

On the afternoon of July 30, I decided to drive to The Shed. It is a self-consciously ramshackle and very spacious establishment.

Upon entering, you place your order at the counter, and then, take a seat. To pass the time while waiting, you may want to take a dimly-lit photo. 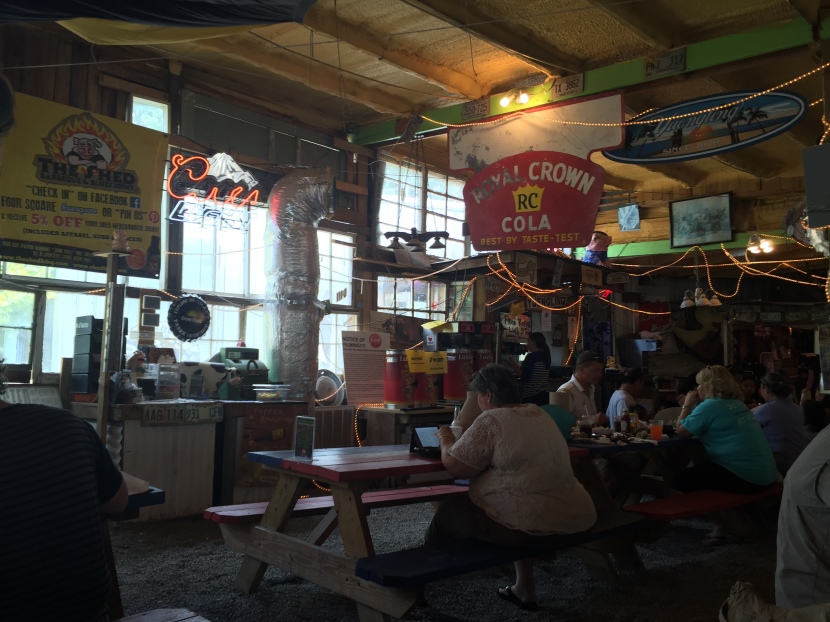 To my left, there was a live performance area. The Shed is a “Blues and BBQ joint,” and I imagine that it gets pretty lively on nights and especially weekends. Thursday afternoons, not so much.

Here’s a (poorly lit) photo of brisket and baked beans (My fries never arrived, but I decided not to make an issue of it after remembering that I’m too fat as it is).

I should really keep tasting notes or something, because I’m writing this some seven months later and my memory is hazy regarding how The Shed’s barbecue actually tasted. I recall liking it, but that the meat could have stood to be a little tenderer. In retrospect, I wish I had gotten the ribs, which are the house specialty.

Also during the Shuckers game on the 29th, then-general manager Buck Rogers (now with the Lancaster JetHawks) told me that his favorite barbecue in the area was the burnt ends at Murky Waters. In order to get ’em, though, you had to arrive early. Therefore, on July 31, after checking out of the hotel, I drove back to Ocean Springs.

Murky Waters is in downtown proper, as opposed to The Shed’s more remote Highway 57 location.

I arrived early enough to snag an order of burnt ends. Success! 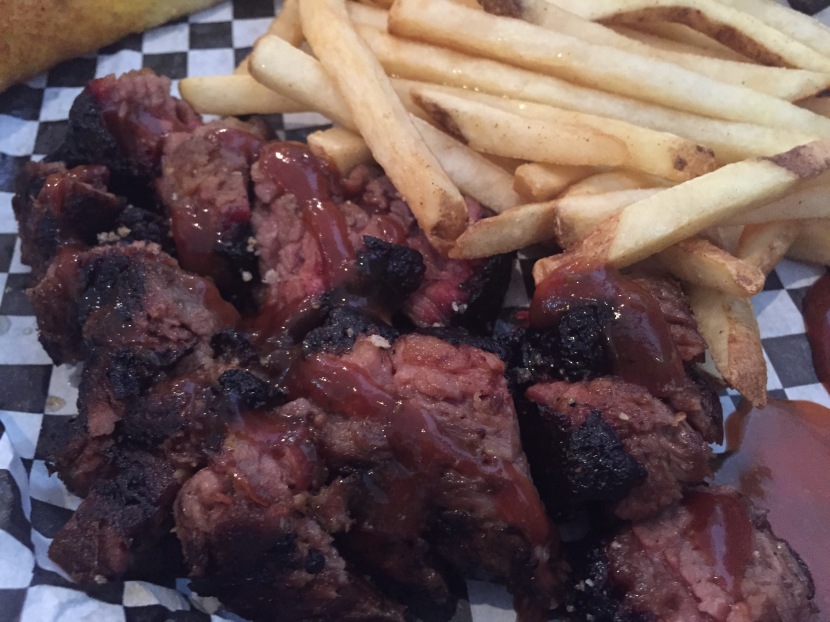 Burnt ends are the best, in general, and these were particularly good. Soft, fatty. melt-in-your-mouth meat contrasted with a crisp blackened crunch (a description that, metaphorically speaking, could be applied to many of my favorite bands).

This is the “Tatonut Shop”, specializing in potato flour donuts. I would’ve loved to have tried them, but they were not gluten-free so in lieu of eating I stood forlornly outside and took a picture. 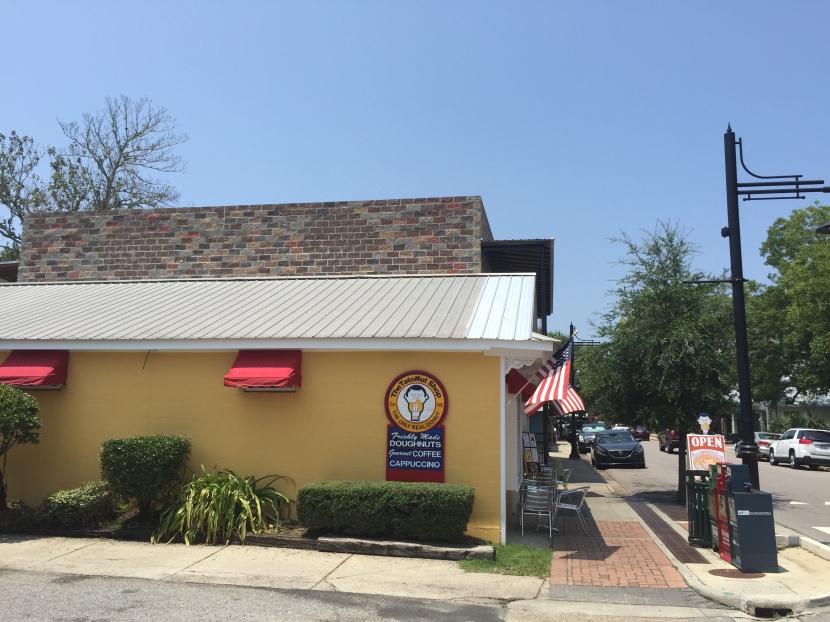 Somewhere in the vicinity of the tree-lined street shown above, I stopped at a local pharmacy to pick up toothpaste and pens (two of my biggest road trip needs). I was quite taken with the store’s selection and decor.

From there, it was just a short drive to some waterfront views. 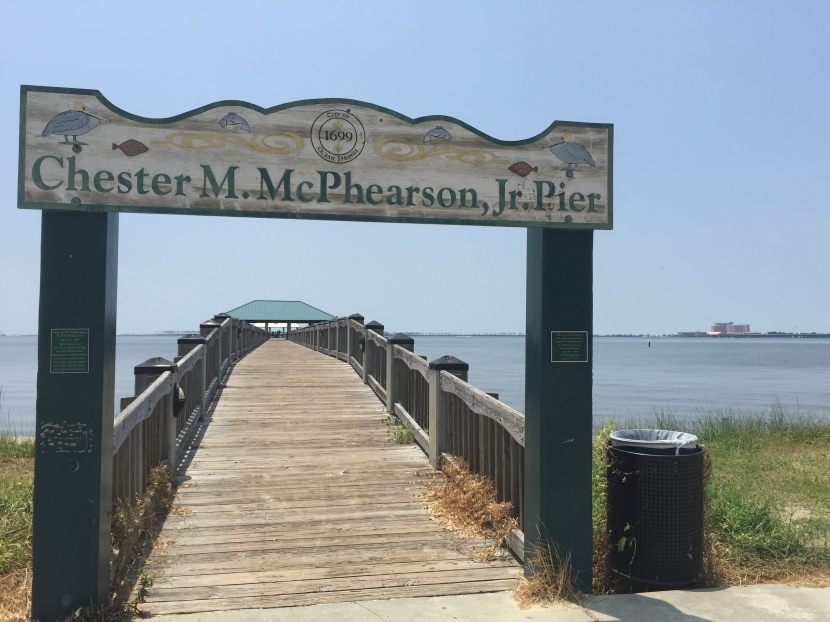 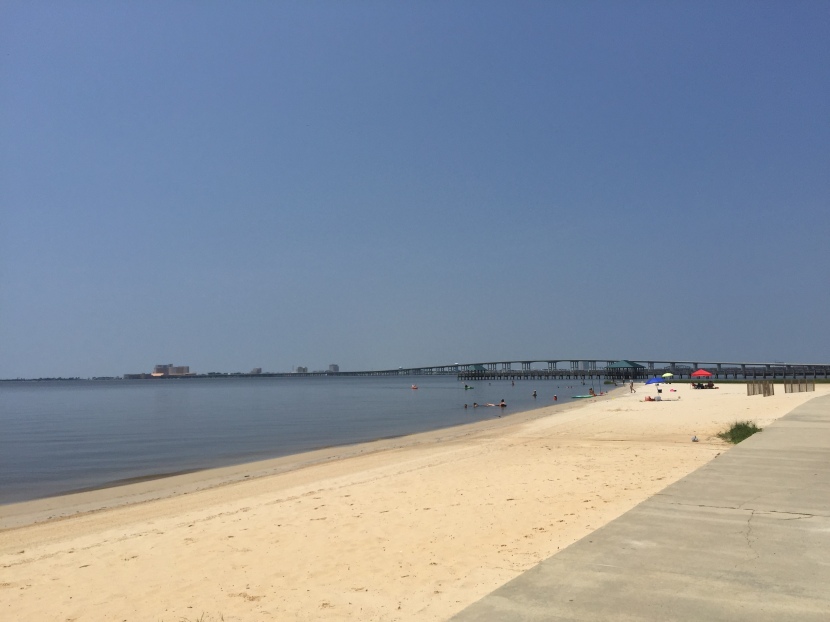 My final act in Ocean Springs, as it is in so many of the places that I visit, was to take a picture of a spider in a port-a-potty. 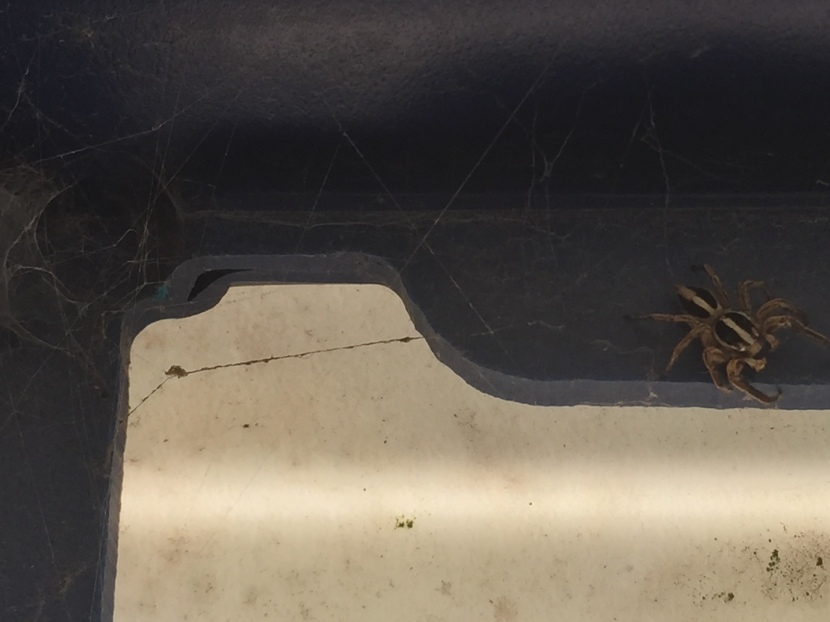 And with that, it was time to bid adieu to coastal Mississippi. Mobile, Alabama, awaited.