This is Ken Childs.

Ken, a Massachusetts native, attended college (and played baseball) at North Carolina Wesleyan College. Collegiate wood bat aficionados may remember him from his stint as bullpen catcher for a Cape Cod League Hyannis Mets team that included Jason Varitek. Upon graduating from college in 2001 he moved to Durham, and in Durham he remains. Ken is currently an IT manager for Duke’s anesthesiology department. He also works as a PA announcer at South Boston [Virginia] Speedway and covers bobsled, skeleton and luge at his website slidingonice.com. Ken, clearly a 21st-century renaissance man, is also a diehard Durham Bulls fan. He’s a half-season ticket holder with front row seats located just past the first base dugout.

Finally, and most importantly to the purposes of this narrative: Ken served as the designated eater when I attended May 7’s Durham Bulls game. Therefore, it was his duty to consume the ballpark cuisine that my gluten-free diet prohibits. That ballpark cuisine included the Angus Barn steak and cheese sandwich that he is brandishing in the above photo.

Let’s take a closer look at this $16 behemoth. 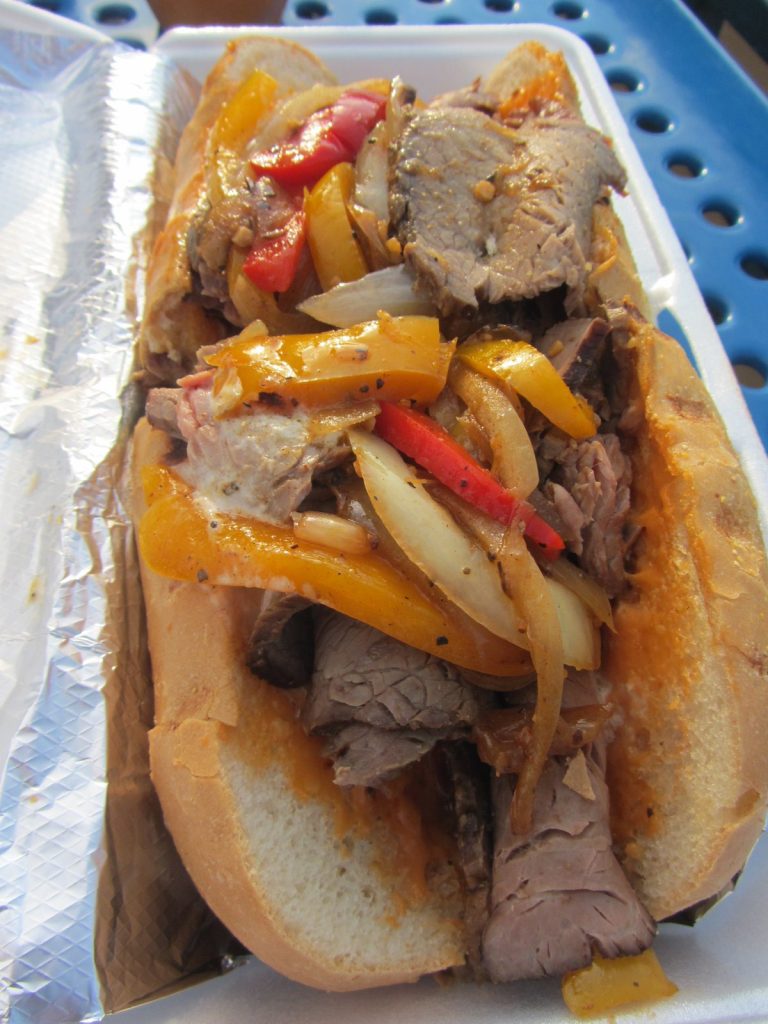 Angus Barn, a well-known upscale Raleigh steakhouse, is one of two new Bulls food vendors for the 2016 campaign. These steak and cheese sandwiches — angus beef, grilled onions, peppers, cheddar cheese and secret sauce on Italian bread —  are prepared and sold out of a concourse kiosk. The only other item on the Angus Barn menu is cheddar cheese and crackers; clearly, steak and cheese is the prime attraction here.

“You have no shame, right?” I asked Ken, as he was preparing to take his first bite of this imposing creation.

“My softball team’s name is, quite literally, No Shame,” Ken replied.

At this moment, I knew I had selected the right man for the job. Have at it, Ken.

“Amazing,” said Ken, while removing dripping foodstuffs from his chin. “I don’t know what the secret sauce is, but it’s delicious as hell. This is the best cheesesteak I’ve ever had. I’m not even exaggerating here.”

As for the hefty $16 price tag, Ken said it was justified but conceded that there are better deals to be had.

That said, he then went back to rhapsodizing about his sandwich.

2016’s other new ballpark food vendor is Makus Empanadas. We didn’t have any luck there, unfortunately. It was the seventh inning, and they were already sold out.

Undaunted, we traversed over to the third base side of the ballpark in order to sample the day’s two Star Wars-themed beverage offerings.

On the left is Vader Ade, consisting of Fruit Punch Gatorade and blood orange sorbet. On the right is Yoda Soda, which is Lemon-Lime Hawaiian Punch with Sierra Mist and lime sorbet. Ken sampled the former and I the latter. Both were overwhelmingly sweet. Kids would love ’em, I think, but it was a little too much for my refined and sophisticated adult palette to handle.

“It tastes like ice cream covered in Pixy Stix juice,” is the quote written in my notebook. I’m not sure who said that, me or Ken, so let’s just consider it a team effort.

Despite having eaten a massive steak and cheese sandwich in less than 10 minutes, Ken was still hungry. Or, at the very least, he was still willing to stuff more food into his mouth. Next up was a visit to Smokebox Barbecue, located on the outfield concourse.

The Smokebox is “eastern style” vinegar-based barbecue. Ken opted for the ‘Cue Dog, which is a hot dog topped with pulled pork and coleslaw. 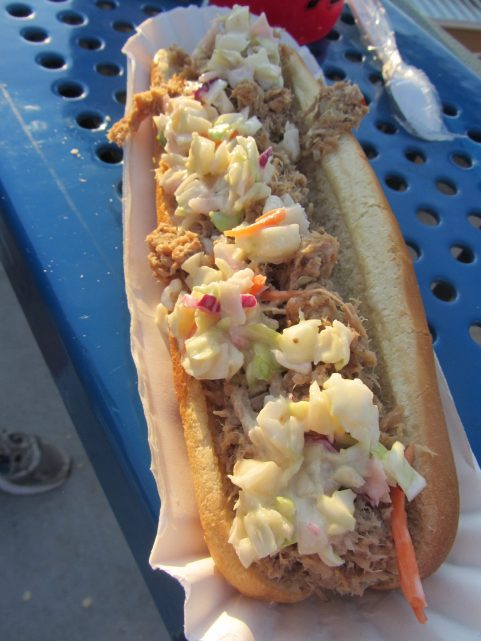 Ken gamely assented to starring in yet another Vine video.

“You’ve got to come at this thing from the bottom to really get it right,” said Ken. “But the barbecue is incredible, and that plus the dog and the slaw, it all comes together. It’s inexplicable, really.”

As with the steak and cheese sandwich, Ken consumed this oversized item within the span of a few minutes. His food consumption efforts were nothing if not conscientious, focused and dedicated.

“I’m not one to back down from a challenge,” he said. “Thankfully, there’s no bad challenge here. The food here is incredible. They’ve got a little bit of everything, and it’s fantastic. It really is.”

Thanks to Ken volunteering to be my Durham Bulls designated eater. This was an experience that really stayed with him.