About a week before I embarked on my road trip to the Carolinas, I received a package in the mail from the Charleston RiverDogs. In said package was a pristine South Atlantic League Baseball, along with a note from RiverDogs mascot Charlie T. RiverDog. “Hi Ben,” it read. “Please return this ball to the Charleston RiverDogs on May 9, 2016. Redeem for one first pitch at Joseph P. Riley, Jr. Park.”

I’ve never been one to disregard politely-worded written requests, especially when they come from Minor League mascots, so I dutifully put the ball in my road trip luggage and it traveled with me from New York City. On May 9, as scheduled, the ball and I arrived in Charleston.

Alright, walking to @ChasRiverDogs while carrying the first pitch ball that traveled with me from NYC. pic.twitter.com/MMNgo6KI3W 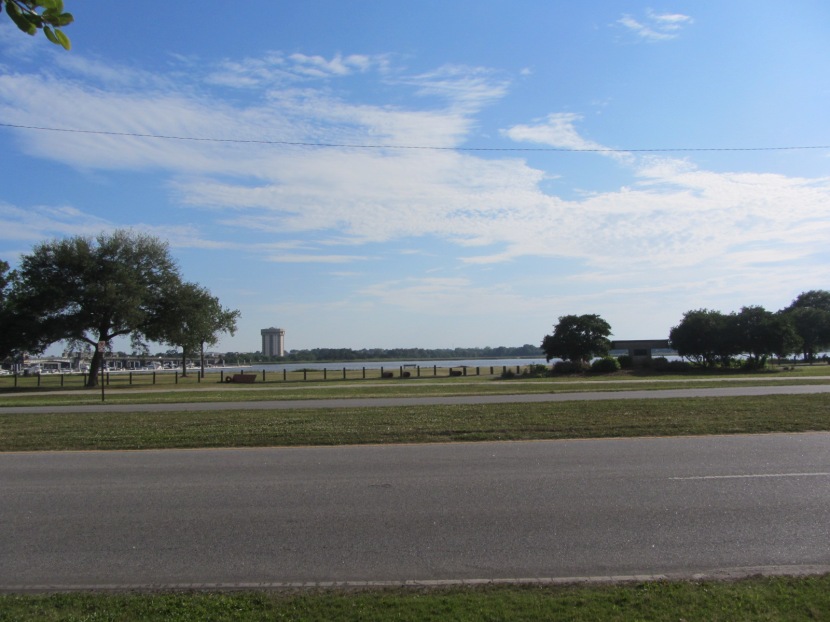 …I arrived at the abundantly leafy front entrance of the ballpark.

Once I got the to the gates (which had not yet opened to the public), I heard a voice from on high. “Ben Hill,” the voice said. The voice belonged to Riverdogs director of operations Philip Guiry, who, after stringing lights among the trees below, was doing his best not to electrocute himself.

Long-time readers of this blog may remember Philip from my 2013 visit to the Bakersfield Blaze, with whom he held the lofty title of assistant general manager. At the time, he told me that he would be the “Quasimodo of Sam Lynn [Stadium, home of the Blaze], painting fences and changing light bulbs when no one else is here. You can bury me in center field.”

Life apparently got in the way of those ambitious death plans, because here he is in Charleston. Before resuming his cord untangling duties, Philip made a point of showing me an unlikely mural which can be found on the concourse: Charlie T. RiverDog at the Last Supper.

This mural was painted by an artist by the name of Andy Nelson, who Philip told me “Just shows up and crashes at the stadium, hangs out and paints, and then shuffles off.”

It’s easy to miss, however, as it is located on the inner portion of a concession kiosk conglomeration.

Philip had work to do, so he asked promotions director Nate Kurant for advice on how to get rid of me.

They needn’t have worried. Taking inspiration from Andy Nelson the peripatetic muralist, I just sort of shuffled off. Here’s what the concourse looked like, shortly after the gates opened.

Mondays are “Bark in the Park” nights, which are always a crotch-sniffing good time. 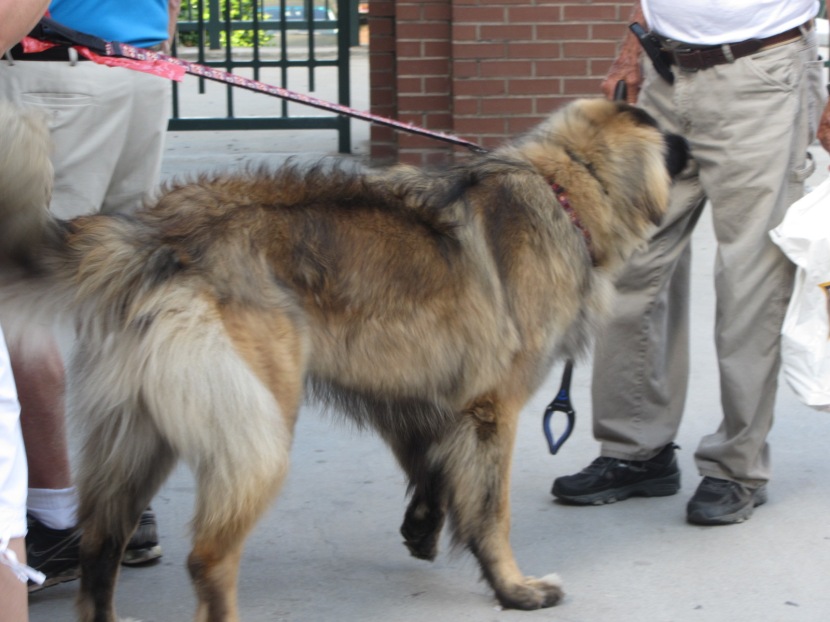 The first base side of the ballpark features a scenic view of the swampy Ashley River surroundings. 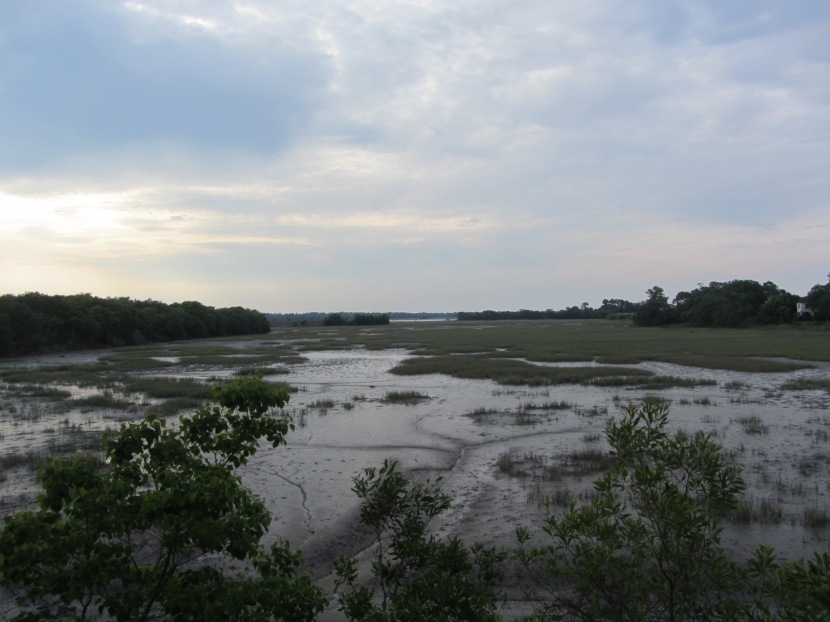 My wanderings then brought me to the press box. Shortly after entering, Nate yelled “Ben! Fox! Fox!” I just assumed he was letting everyone know that I am a total fox, and maybe he was. But, if so, his urgent exhortations had a dual purpose as there was an actual fox running across the field. After fumbling about with my camera, I snapped this photo just as the fox was about to disappear into the dugout.

After recovering from this brief encounter with wildlife, my wanderings resumed. These two young boys were practicing their synchronized berm-running routine. 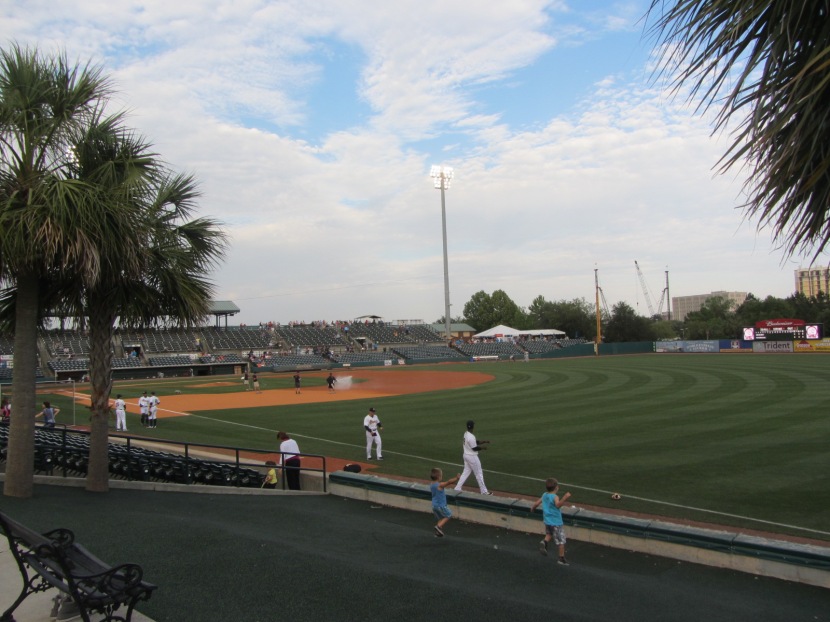 My next stop was the field of play because, if you’ll recall, I had a first pitch to throw.

Charlie T. Riverdog, the ball-mailing mascot, was waiting for me. 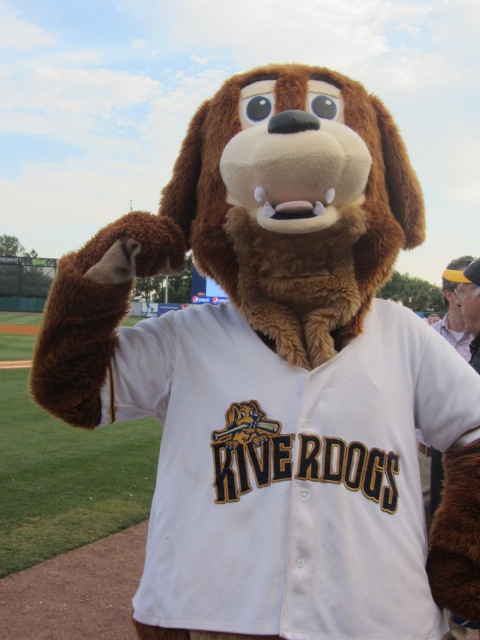 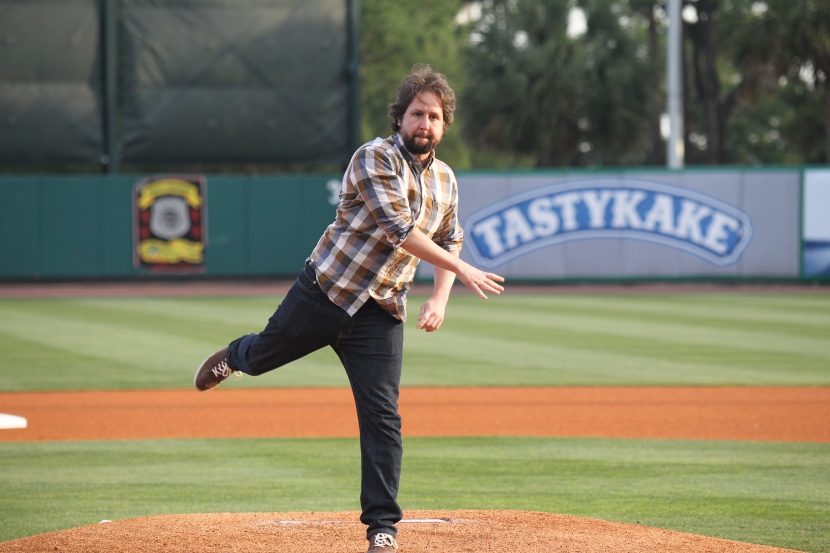 How do you know that it was a strike? Because I never lie.

I threw first pitch strike @chasriverdogs game. Take my word for it. https://t.co/2awZJ4PK1u

When this narrative resumes, a game will have just begun. But, for now, I’m just gonna shuffle off.