This season, when I’m on the road, I’ll write a quick blog post about each Minor League ballpark that I visit. Then, upon my presumed return home, I’ll provide the multifaceted blog coverage that you have come to know and perhaps even love. Last night I visited Pulaski, Virginia, the eighth stop on my 10-team Appy League road trip.

Calfee Park, from the outside: 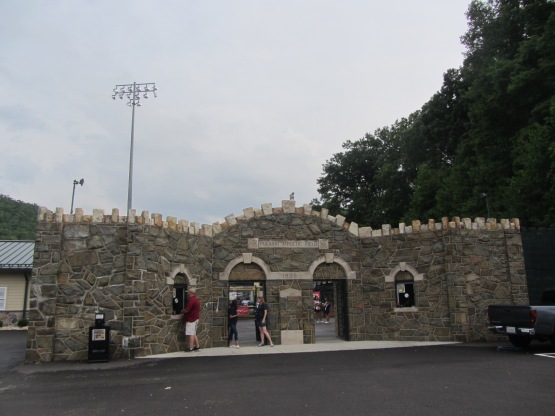 Calfee Park, from within:

At Random: One, Calfee Park is the only Appy League stadium I’ve visited that has a videoboard (installed in 2015). Two, it was a wild ballgame. The Pirates scored six runs in the second inning on one hit, lost the lead three times and still went on to win by a score of 15-14. Time of game: 3:40.

Your groundbreaking and subversive ballpark joke of the day, Pulaski Yankees. https://t.co/FhTEfh6whs

Does the video board have to do with being a Yankees farm team? Does the money from MLB teams flow that far down?

No, it’s all local money. I’ll have more on that later, stay tuned.