Requisite pregame wanderings out of the way, it was time for a ballgame. The Kingsport Mets were hosting the Pulaski Yankees on this incendiary Sunday afternoon, meaning that it was the Appy League equivalent of New York City’s twice-annual “Subway Series.”

Pulaski and Kingsport are located approximately 115 miles from one another. Shockingly, there is no subterranean transportation between the two locales.

I don't know of a subway line between Kingsport and Pulaski. Perhaps the 1-81 Series?

So, yeah, I guess I’ll just call it the I-81 Series. Or, as Kingsport assistant general manager Josh Lawson suggested, “Subway Series South.”

Not that I was really watching the game, anyway. Since no one volunteered to be my Designated Eater in Kingsport (you know, the individual who consumes the ballpark cuisine my gluten-free diet prohibits), Lawson took the job.

Here is what we had to choose from:

And here is what was chosen: 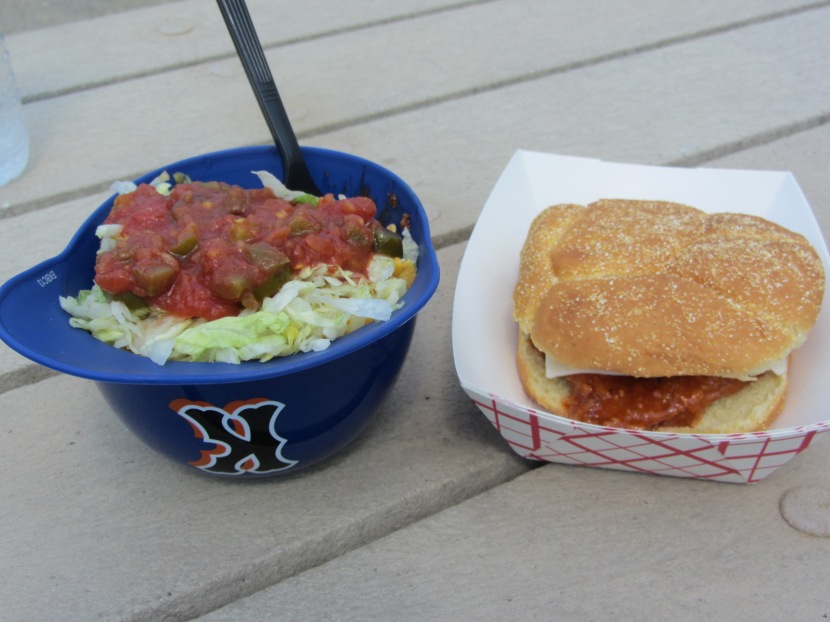 Take it away, Josh:

This so-called “Taco in a Helmet” consists of chips, chili, shredded cheese, lettuce, jalapenos and salsa. Josh explained that it replaced the “Mets Pie” on the concession, menu, the “Mets Pie” being Fritos in a hot dog container covered with cheese and chili and the like.

“[The Taco in Helmet] is real filling, and you get to take home a collectible souvenir also,” he said. “But it took three years before people stopped ordering the Mets Pie. This is the new Mets Pie.”

Josh then had an opportunity to enjoy a Buffalo Chicken Sandwich.

“[General manager] Brian [Paupeck] was saying that no one would want to get their hands dirty with wings,” said Josh. “So why not take our chicken sandwich and make it a Buffalo chicken sandwich? It now outsells our grilled chicken.”

Taking a cue from their sister club in St. Lucie, the Mets offer charcoal-grilled pretzels.

They also offers bags of house-made pork rinds, which I (greatly) enjoyed later in the afternoon.

With Josh’s assistance, I crashed a group outing taking place on the first base-side picnic pavilion. There, I received a helping of some primo pulled pork and a side of baked beans. 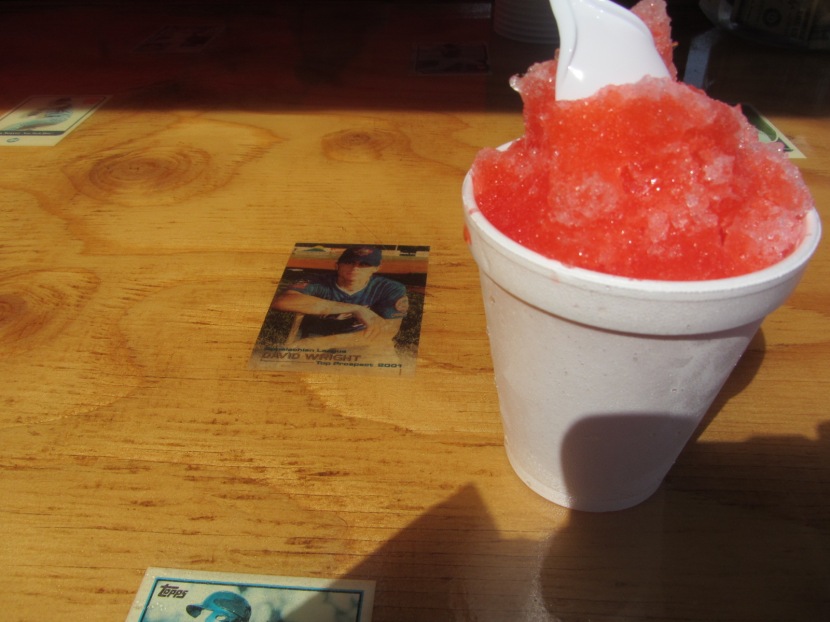 “Awesome!” it says in my notes, regarding the taste of Tiger’s Blood. (Don’t be discouraged, young writers. It took me years of practice to be able to describe things so vividly and creatively).

I enjoyed the shaved ice while sitting at the Beer Porch, which featured Mets baseball cards under (plexi)glass. The Beer Porch offers alcoholic beverages from Kingsport-based Sleepy Owl Brewery and Gypsy Cidery.

Josh and I also swung by the team store, where this T-shirt currently reigns as the No. 1 selling piece of apparel. 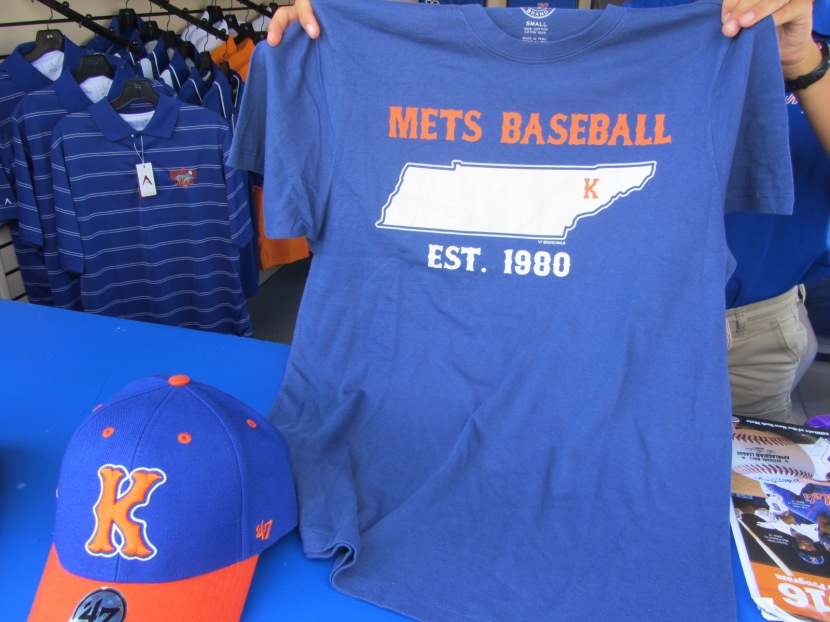 Despite the flurry of information and imagery I have just hit you with, this was an inordinately sleepy day at the ballpark. It was a sun-baked afternoon and, as you can see, Hunter Wright Stadium doesn’t exactly offer much in the way of shade.

I got some relief from the heat in the press box, which isn’t directly located behind home plate. It’s shaded to the left, and at a bit of an angle.

The press box offers a view of the dog park located beyond the fence in left field and, in the distance, Bays Mountain. At one point in the afternoon, I was told that wolves are raised on the mountain, and that roadkill deer are fed to the wolves. I don’t remember who told me this, but it’s in my notes so it has to be true.

Back on the concourse, I spoke with Rocky and Kyle Horne, the father and older brother of Kingsport pitcher Kurtis Horne. Rocky and Kyle had traveled some 2,800 miles from their home on Canada’s west coast to see Kurtis pitch. My story on them can be read HERE. 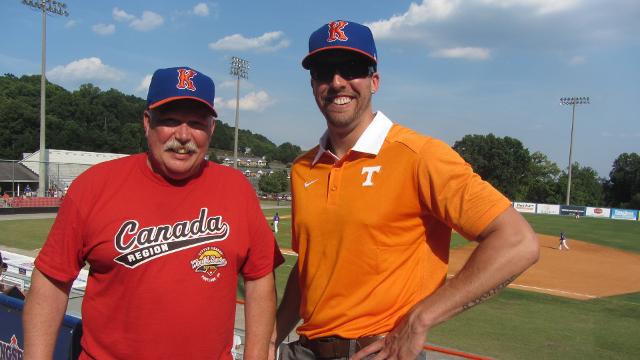 Through it all, the sun just kept beating down.

Pulaski went on to win this particular iteration of the “Subway South Series,” by a score of 11-5. The Yankee players celebrated by putting their bodies in close proximity to one another. 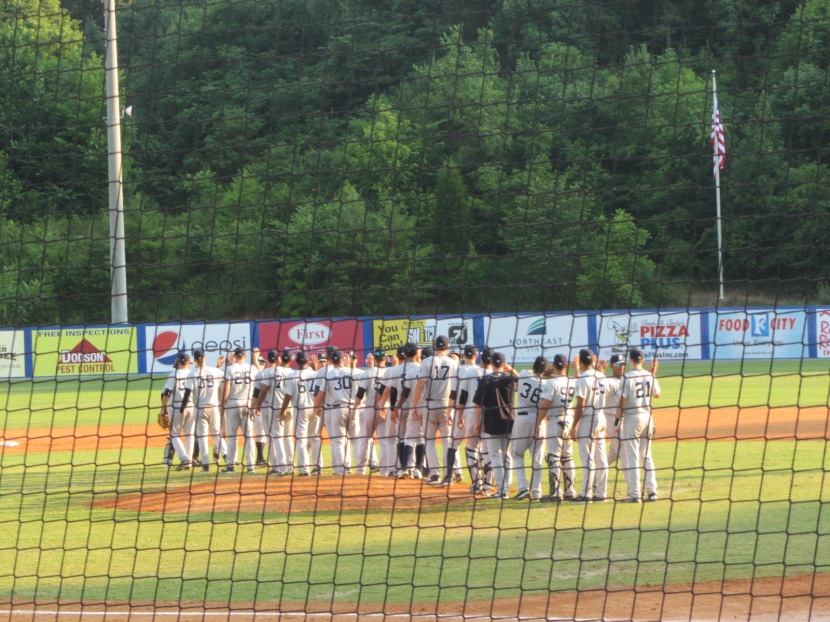 By the time the ballgame ended, I wasn’t feeling too well. The heat, combined with that day’s stadium diet of pulled pork and pork rinds, had left me feeling light-headed and nauseous. I spent over a half an hour in the parking lot after the game, desperately trying to come up with a Groundbreaking and Subversive Ballpark Joke, but I just couldn’t do it. My brain, and body, were shot.

This is me, defeated, completely and totally out of jokes.

Like the blog? Then wear the Ben’s Biz shirt!