August 8 (Part Two) — Once the ballgame was underway in Reno, I began my nightly bout of wandering. At Greater Nevada Field, the city is situated behind the ballpark and, therefore, visible from the outfield.

This is the view from beyond right field. The Truckee River keeps right on rolling. 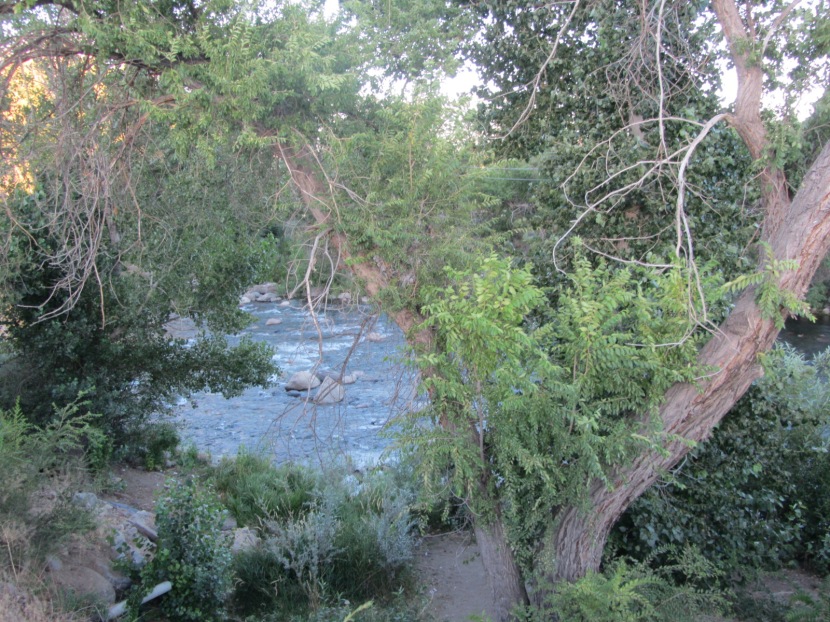 Joining the Truckee River and city skyline in Greater Nevada Field’s pantheon of ballpark views are these railroad tracks. Freight trains pass by throughout the ballgame, headed to parts known by some but not by me.

Trains and a game in Reno. https://t.co/H7yKhAzKB8

My circular journey brought me back to the area behind home plate. Archie was there. I really enjoy seeing Archie.

When I visited the Aces in 2013, Archie could talk. Archie no longer talks. It’s just one of those things.

This home plate concourse location was a designated meeting place, as I had been recruited to compete in the Schofferhofer “Race to the Beach” contest. You know the drill — you put on an orange t-shirt representing the presenting sponsor, and then you ride an inflatable killer whale toward articles of beach-themed clothing that placed along the grass on the third base side of the field. Upon reaching these articles of clothing, you must put them on before once again mounting the whale and heading to the finish line. You do this against an enthusiastic, friendly and somewhat profane native of North London named Tom, who now works in Tahoe as a ski and paddleboard instructor. Tom immediately becomes your best friend, despite the fact that you must compete against him.

Tom and I and the Aces personnel assigned to tending to us made our way to the front row, so that we’d be ready to leap into action as soon as the inning ended. Archie, owner of the most scuffed-up pair of size 24 Chuck Taylors that the world has ever seen, was waiting for us.

Clearly, I was no match for Tom. But even after this heated competition, we remained the best of friends.

My next stop was the outfield concourse, as I had been invited to spend some time inside the giant inflatable baseball that sings “Take Me Out to the Ballgame” every night from its perch beyond the outfield wall.

I guess this is the sort of thing that needs to be placed in a larger contect. Here’s a video example:

In the top of the seventh, myself and an Aces employee whose name I cannot recall at the moment (the back of his jersey said “Button”) entered the yet-to-be inflated baseball. While standing on a platform in the middle, it took shape around us.

In the midst of all this, I took a selfie. 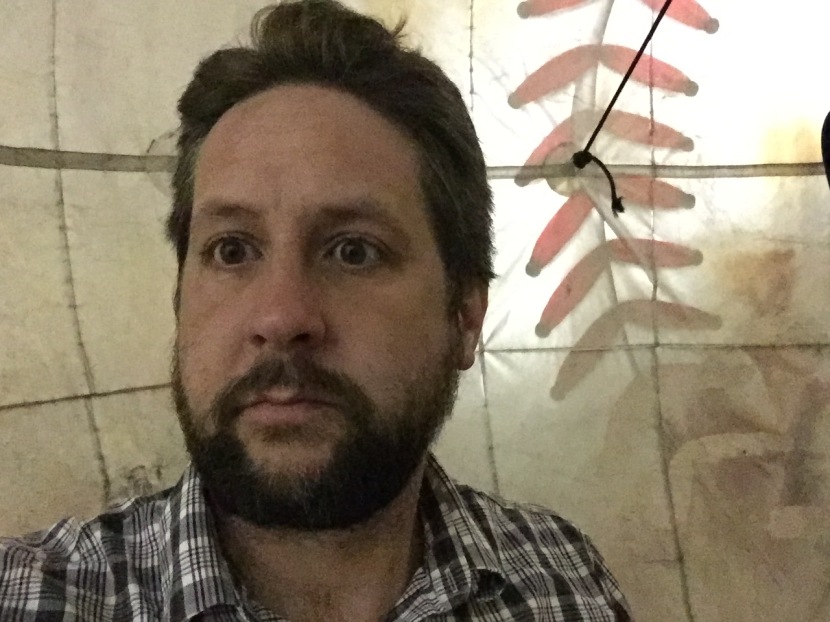 When it came time to “sing” during the seventh inning stretch, the platform was raised (via a switch located outside of the ball itself) and the ball became visible over the outfield wall. As the sounds of “Take Me Out to the Ballgame” came through over a walkie-talkie (it was too loud in the ball to hear the PA system), the ball’s “lips” were moved via these metal handles so that it would look like the ball was singing the song.

Here’s a video of what the “singing” looks like from the inside.

EXCLUSIVE! View from the inside of @Aces giant inflatable baseball as it "sings" during the seventh inning stretch. pic.twitter.com/n5vSWyoSXv

And that, my friends, is how that particular piece of sausage is made.

Thus concluded the “programmed” portion of my evening, which otherwise consisted of — you guessed it — wandering. 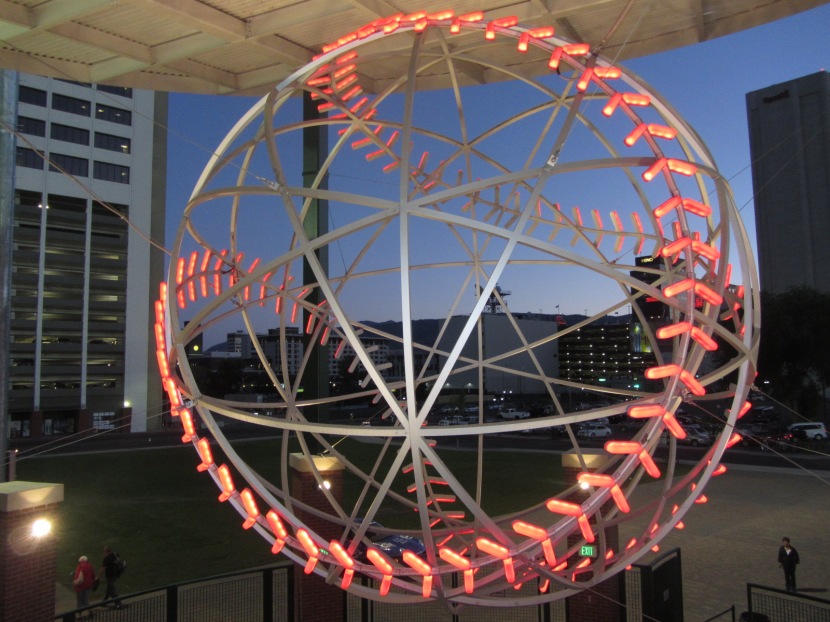 Between the ball and the batter lies the Freight House District, a year-round entertainment complex attached to the ballpark. 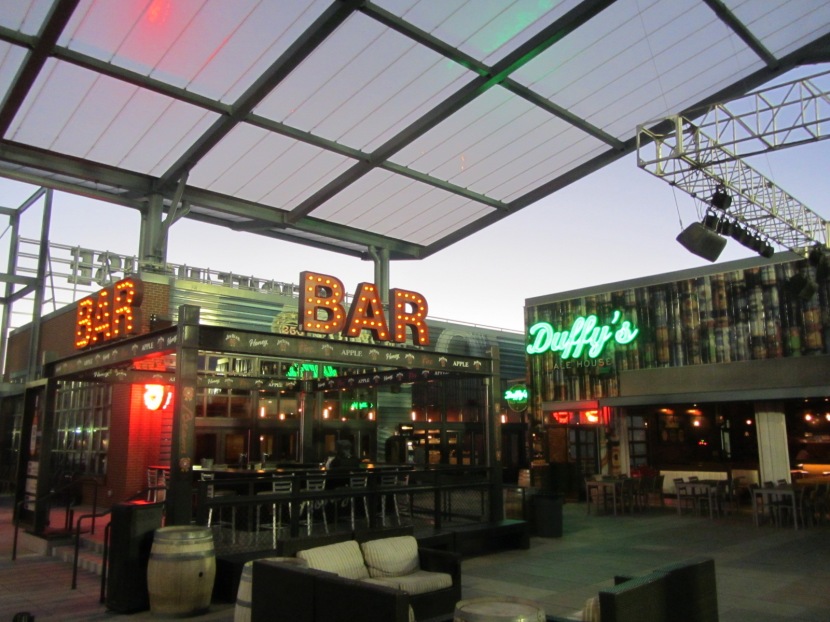 It was here where I wrote and disseminated my Groundbreaking and Subversive Ballpark Joke of the Day. Most of the feedback I got on this one was along the lines of “Huh?” and then, “Okay, got it now. Took me a minute.”

Your groundbreaking and subversive ballpark joke of the day, Reno Aces. https://t.co/OLkhrcrYtM

As the Aces came to bat in the bottom of the 8th, trailing 4-2, the “Rally Llama” appeared on the videoboard. I tried to get a photo of the llama, but all I ended up with was Archie.

Archie is alright, though. Archie is, in fact, great.

The Rally Llama, or whatever it was, failed in its mission. The Aces lost, defeated by Bees. It was still a very enjoyable evening at Greater Nevada Field. The greatest, even.