Okay, we’re in the home stretch now. After visiting four teams in the California League and three in the Pacific Coast League, my 2016 travels concluded with stops at three Northwest League ballparks. The first of these stops was Memorial Stadium, home of the Boise Hawks.

Memorial Stadium’s first base side bleachers are framed by the light towers, looking for all the world like the world’s biggest goal post. 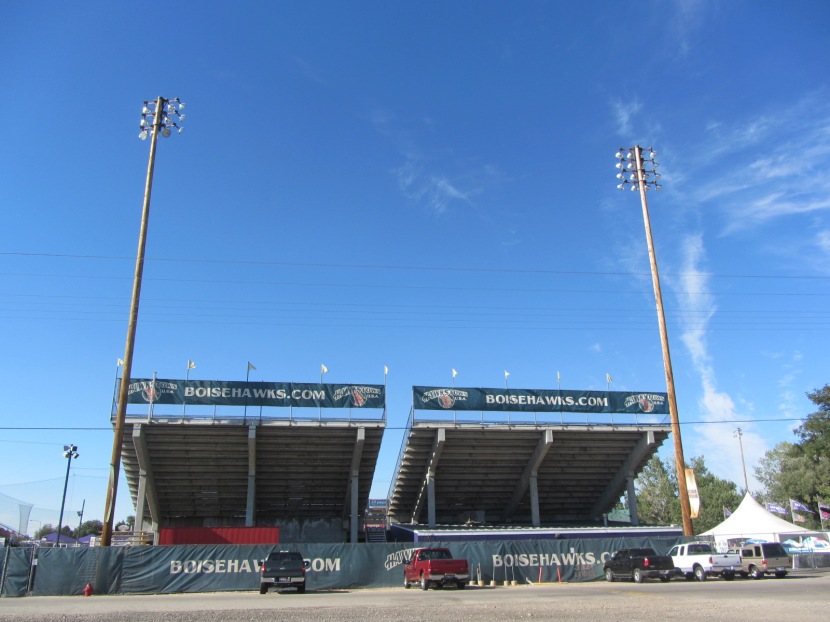 The Idaho sky was a sight to behold on this late Wednesday afternoon, as wispy white clouds streaked across an endless blue expanse. It was hot as all get-out, but nonetheless this was still an irrefutably great day for baseball.

The bold blue sky was offset by a preponderance of purple, so long as one was willing to focus one’s gaze Earthward. The Hawks became a Rockies affiliate prior to the 2015 season, and the front office dutifully swathed large sections of the ballpark in Colorado colors.

There is purple paint on the exterior clubhouse cinder blocks, and purple paint along the wooden fence demarcating the third base side picnic area from the playing field.

This growth chart is a great way to familiarize one’s self with the current Rockies’ system, so long as you’re willing to overlook the fact that it excludes the team’s Rookie-level and Class A Advanced affiliates.

This kids play area is where all the most talon-ted young athletes gather.

Among the items for sale in the team store is a Fruit Pickers jersey, an homage to Boise’s first professional baseball team.

While wandering amid the items for sale, I ran into the one and only Humphrey the Hawk. He is not for sale.

It was, all things considered, a slow night at Memorial Stadium. Assistant general manager Mike Van Hise told me that the previous day had been a sellout — the seventh of the season — and that attendance had been on the upswing since new ownership took over prior to the 2015 season. (The Hawks drew 114,476 in 2016, their best mark since at least 2005.) But this particular Wednesday was one of those blase dates on the schedule, with no particular promotion or group night presence to put it over the top.

C’est la vie. I kinda like low-key evenings. We all need one once in a while.

The National Anthem was sung as purple-hued players faced the deep-blue sky in contemplative thought of our country and their place within it. 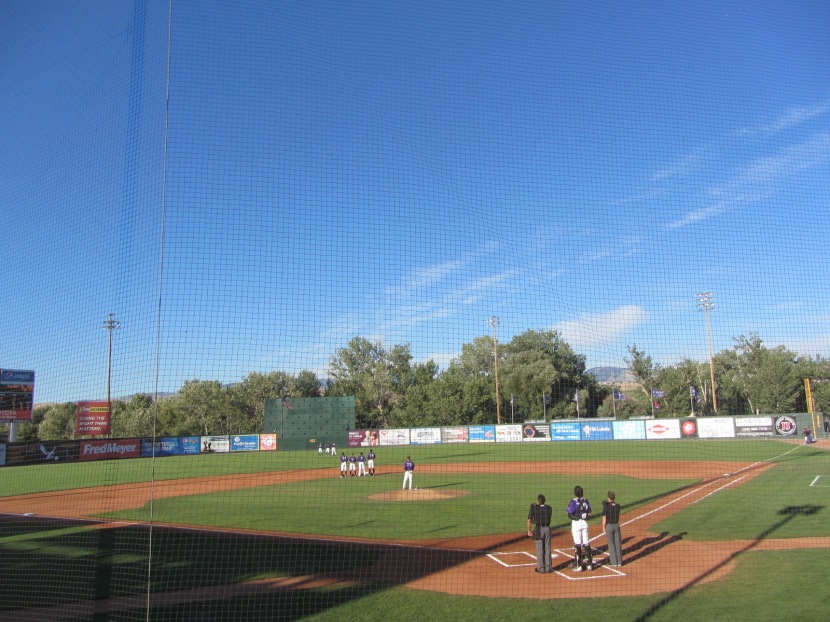 I spent a good portion of the game’s early innings with my designated eater and this, as always, will be documented in the next post. As the game wore on and the sun made its descent, the ballpark took on more muted, soothing tones. 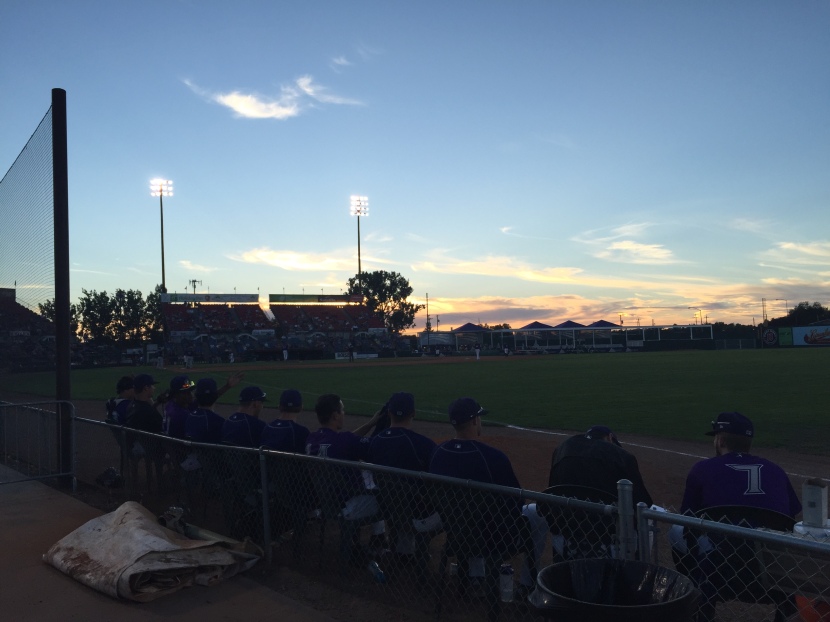 A particular highlight of the Memorial Stadium in-game experience is the nightly Potato Race. This tweet explains it all.

I ran as Fry in tonight's @BoiseHawks Potato Race. I got beat by both Gem and Spud. pic.twitter.com/Frwv1Fqe9V

The evening just kept slip-sliding away, into the inexorable, ineffable twilight.

Who knows exactly when it was, but at one point I wrote and disseminated a Groundbreaking and Subversive Ballpark Joke of the Day. I now realize that I inadvertently plagiarized myself earlier in this post, by using a very similar play on words. I’m not the most talon-ted writer, so I overcompensate with puns.

Your groundbreaking and subversive ballpark joke of the day, Boise Hawks. https://t.co/isjaCkEzii

The hits just kept on coming.

It's uncanny – every single foul ball seems to break a window. https://t.co/rMTogY6IIj

The Hawks were losing to visiting Hillsboro, 9-5, as they came to bat in their half of the eighth. This called for an appearance by “Rally Rocket,” the alter-ego of Hawks account executive Jon Jensen. 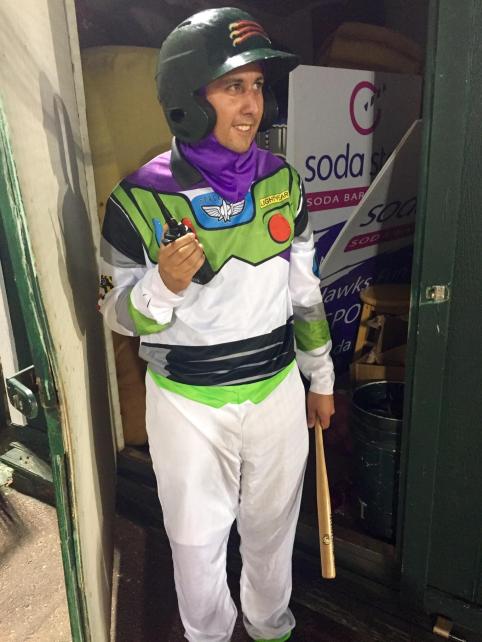 A Rally Rocket rally failed to materialize, however. Despite the game taking place in Hawkstown, U.S.A., the Hawks lost.

A little defeat never dampens the enthusiasm of base-running children, however. They streamed in from right field, circling the bases and then receiving a coupon from team sponsor Soda Stop. 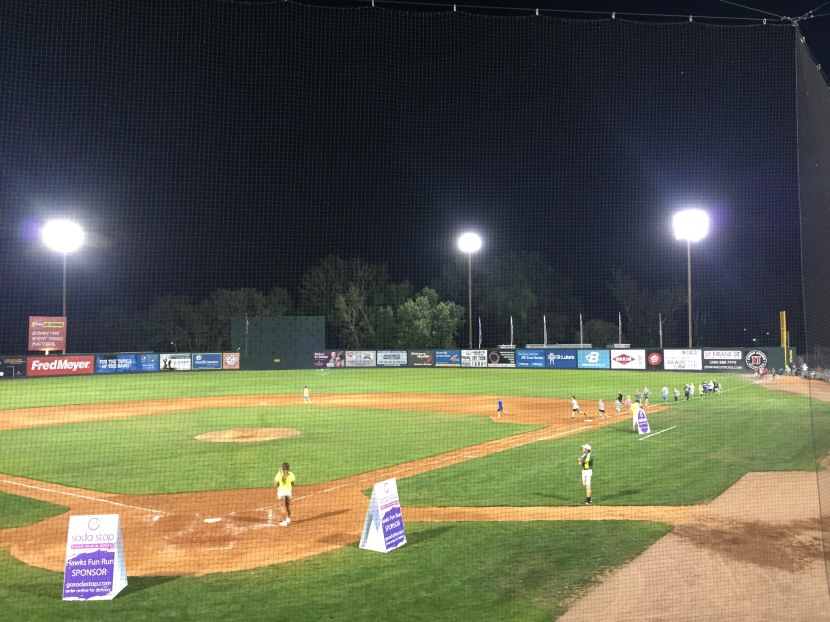 And that did it for my evening at Memorial Stadium. Good night from the parking lot. 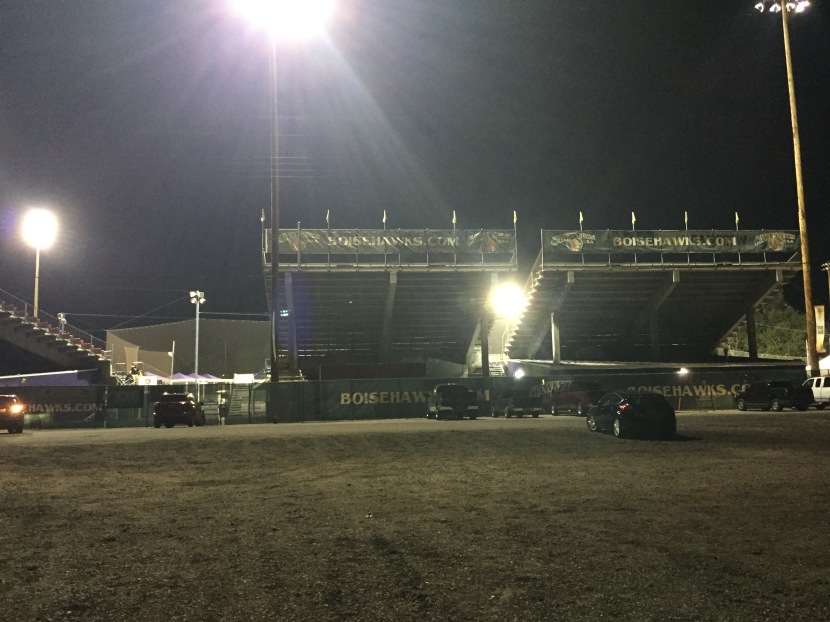