Minor League Baseball is, often, a family affair. Therefore it made sense that, when I visited the Tri-City Dust Devils, I had a whole family of designated eaters. This is Theresa and Joe Scott, flanking their son, Hunter. As designated eaters, the Scotts would be tasked with consuming the ballpark cuisine that my gluten-free diet prohibits.

The Scotts live in Pasco, so close to Gesa Stadium that they could walk to it if they wanted to. Joe was born and raised here, Theresa moved to the area when she was seven. Joe works for the BNSF Railroad as a labor hostler, a job that includes tasks such as refueling the trains and changing the brake chutes. He’s been with BNSF for 14 years; both his Dad and his uncle work there.

Baseball factors heavily into the Scott’s summers. Theresa is president of the Pasco Little League, Joe coaches and Hunter plays second base and shortstop. The family are Dust Devils season ticket holders and members of the booster club, and in that capacity they host players during the season (at the time I visited they were hosting reliever Mark Zimmerman, though he was soon promoted to the Class A Advanced Lake Elsinore Storm).

Hunter, while not attending school (he’s in the fifth grade) and playing second base, is a member of the local 4H club. He told me a sad story about a pig he had been raising, who had escaped from his enclosure, couldn’t get back in and died of heat stroke (this is a desert climate, remember).

“That’s what we told him, ‘Don’t give it it a real name,'” added Theresa. “You don’t want to get attached.”

Bacon wasn’t on the menu this evening, but pulled pork was. This is the Grand Slam Burger, in which the burger is topped with cheese, barbecue sauce and pulled pork.

Joe took care of this one.

“It’s good,” said Joe. “The pulled pork and burger combination was something I wasn’t so sure about. I’m a big pork guy, and raised pigs growing up, but wasn’t expecting them to go together.”

Hunter, whose favorite restaurant is Red Robin, likes to get chicken fingers at Dust Devils games. He said he likes them because they’re “nice and crispy.” 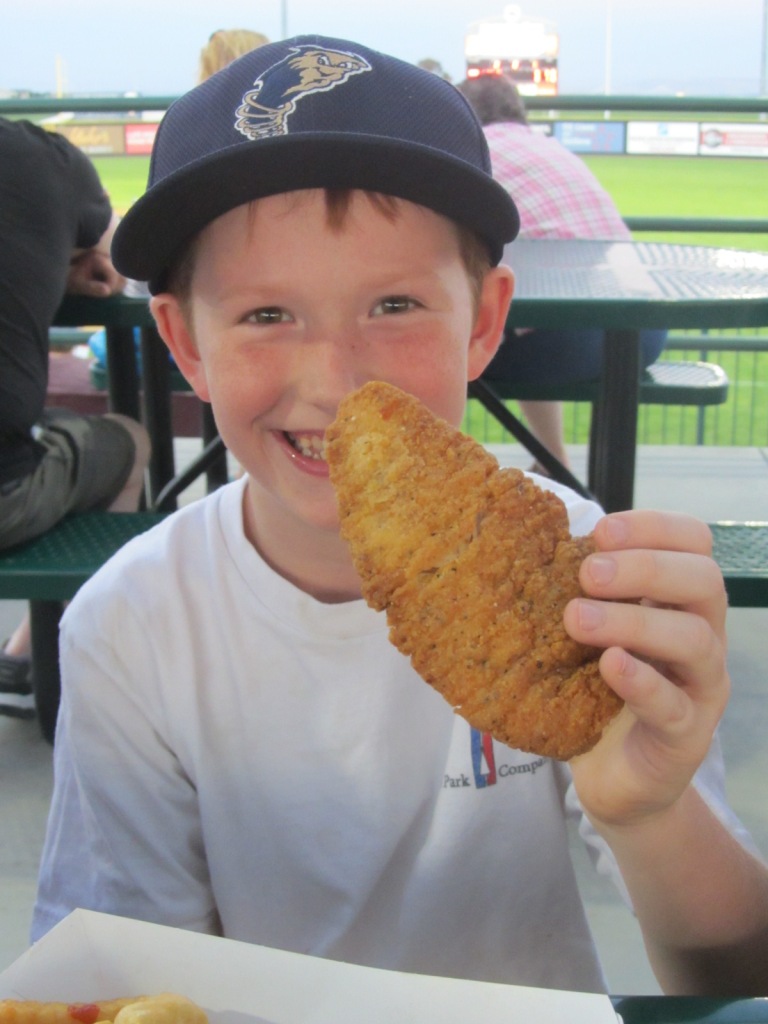 Hunter also got a hot dog, as it was “Dollar in Your Dog Night.” Who knows, he could get rich! 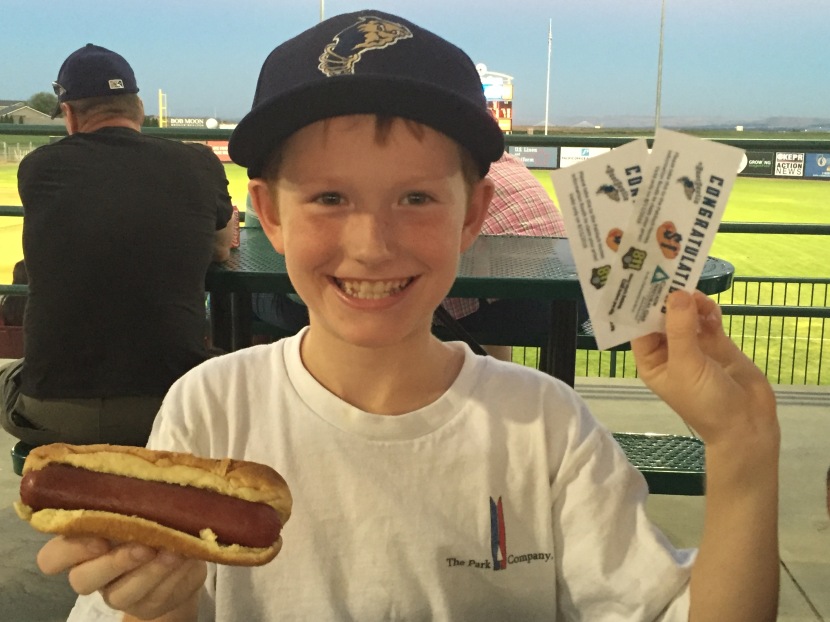 Theresa is fan of the garlic fries, remarking that “the Mariners are known for their garlic fries, where I learned to love them, and I was so excited when they were brought to the Dust Devils.”

(None of my garlic fries pictures came out well at all. Cameras, like vampires, don’t like garlic.)

That probably would’ve been enough food, but why stop with “enough”? This is America. Hacienda Del Sol, a local Mexican restaurant, has a kiosk at the ballpark. I went to this kiosk and procured a chicken nachos with everything.

This is so stupid:

We got the “everything” nachos despite Joe’s stated aversion to sour cream and guacamole. He said that he could work around it. 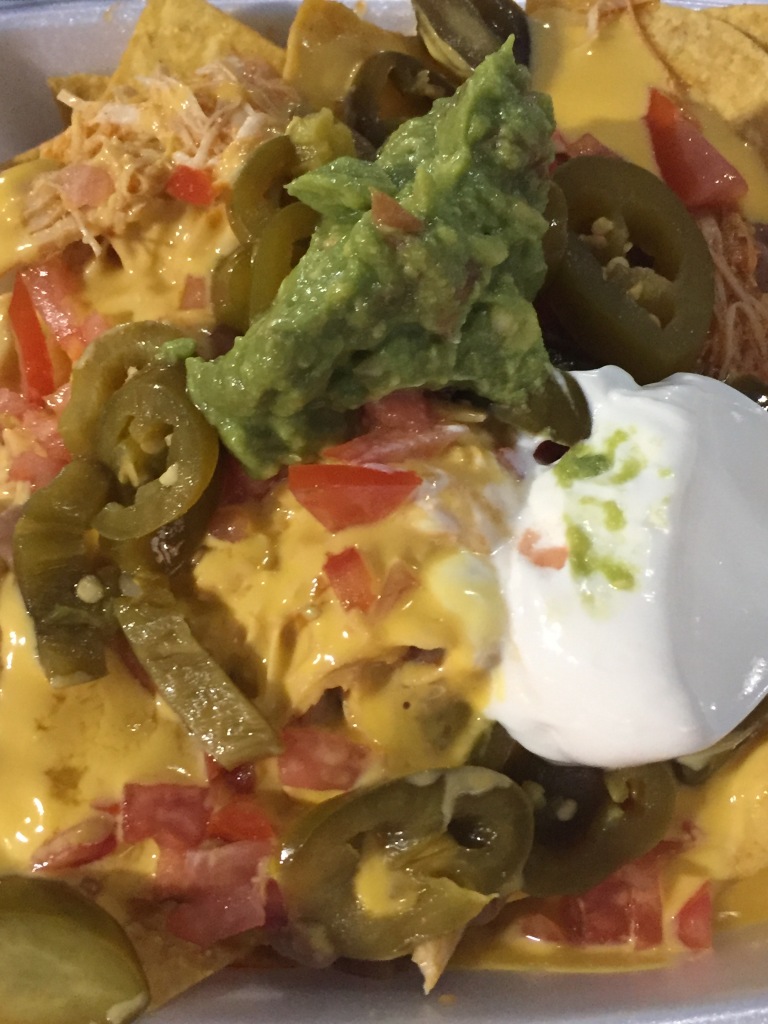 Theresa affirmed that these nachos are “better than normal ones” and that they regularly recommend Hacienda Del Sol to people visiting from out of town.

“If they’re looking for something a little different I say ‘Oh, you want the nachos,'” she said.

Hunter didn’t want the nachos. Or, maybe he did, but he had more important things to do. Namely, running in the nightly “Dusty’s Dash,” in which hordes of kids chase mascot Dusty across the field.

Theresa and Joe, then, had the nachos to themselves. 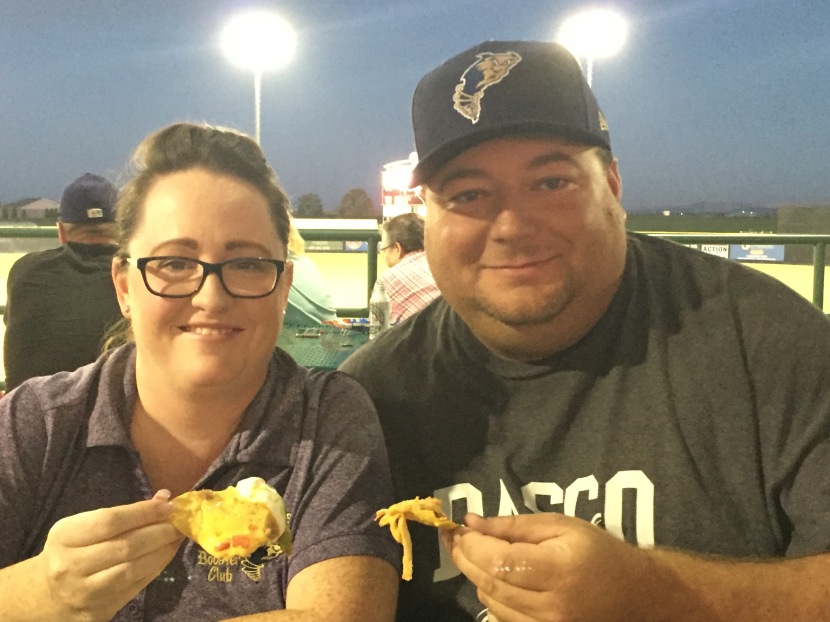 If you’re ever at a Dust Devils game, you might want to give them a “Tri.”