(August 11, part two) We now commence with my second, and second-to-last, post from Gesa Stadium in Pasco, Washington. Gesa Stadium is the home of the Tri-City Dust Devils, Class-A Short Season affiliate of the San Diego Padres. On this particular Thursday evening, the Dust Devils were taking on the Spokane Indians.

In the above photo, you’ll notice the playing field’s distinct demarcation between sunny and shady. This sunshade, located on the first base side and mentioned in the previous post, has a lot to do with that. Most crucially, it renders the third base side bleachers habitable.

During a between-inning break, I joined Dust Devils emcee Erik the Peanut Man for an on-field interview.

This interview was a lot of fun, albeit rushed in the way that most between-inning endeavors are. This was the distinct highlight:

Nailed it, indeed! Still basking in the glow of my ad-libbing success, I adjourned to the camera well adjacent to the home dugout. My friend and co-worker Jared Ravich, one of the first designated eaters in Ben’s Biz Blog history, happened to be there as well. I one day hope I can be as cool as him.

After meeting with my designated eaters — this, of course, will be chronicled in the next post — I transitioned to a food-based endeavor of a different sort. Erik the Peanut Man, who sells peanuts in addition to being the onfield emcee, recruited me as his apprentice. He even had a hat, personalized apron and bow tie at the ready for me. Erik the Peanut Man is nothing is not prepared.

Erik, an employee of the Dust Devils since their 2001 inception, knows what he’s doing.

I didn’t, of course, but I did make one sale that seemed largely motivated by pity. My stint as a vendor also served as an inspiration for the evening’s Groundbreaking and Subversive Ballpark Joke.

Your groundbreaking and subversive ballpark joke of the day, Tri-City Dust Devils. https://t.co/RZPPRE2lCo

I then went from peanuts to the press box, spending an inning on the air with Dust Devils broadcaster Chris King.

Chris has a good view of the action, as broadcasters usually do.

At this point in the evening Jared was in the press box as well, equipped with a camera that can take 360 degree photos. I can’t embed the picture he took here on the blog, unfortunately, but check it out HERE. It’s fairly amazing.

The Dust Devils fell to Spokane, 2-0, and afterwards kids ran the bases with an enthusiasm that could not be quelled by the home team’s defeat. I then interviewed Erik for an MiLB.com story, and in so doing found a Dust Devils collector’s cup in the stands. Here ya go, #cupdate fiends:

Afterwards, in the deserted stadium, I reflected on (and my photos reflected off) a long-ago incarnation of Tri-Cities professional baseball. Cal Ripken, Sr., managed the 1965 Tri-City Atoms; this photo shows Cal and some of his players along with their young children. One of those young children is, of course, Cal Ripken, Jr. 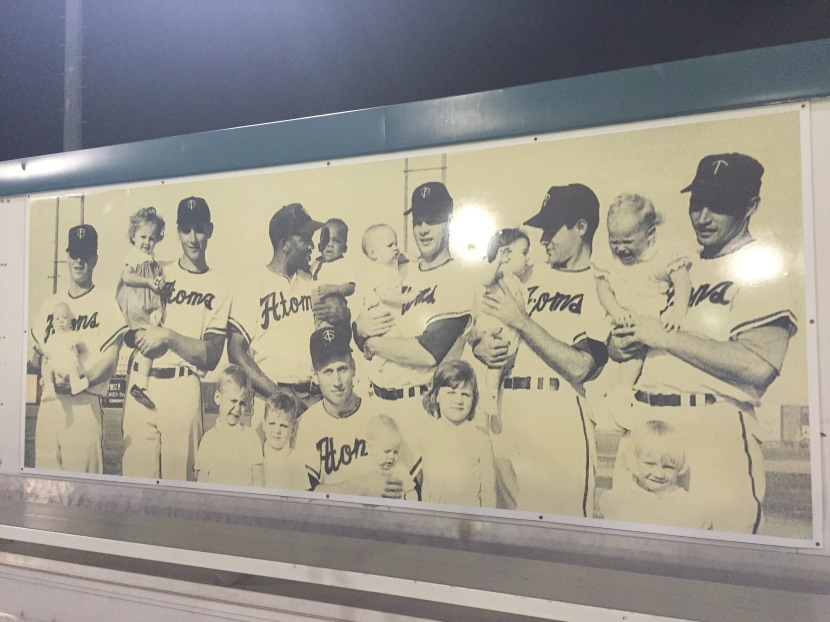 En route to the parking lot, I saw a man in a Dust Devils uniform huddled in discussion with a few non-uniformed cohorts. It turned out to be Dust Devils coach Jonathan Meyer and members of the stadium ops crew, planning a Nerf gun ambush on the front office.

Only in Minor League Baseball, folks.

#TBT This is how my night with @TC_DustDevils ended. pic.twitter.com/YHaYYX05Mi

Earlier in the evening, Erik had told me that he as his Dust Devil cohorts aspire to make Gesa Stadium “the friendliest ballpark in the Minors.” That sounds like something any team would say, and, certainly most ballparks are friendly environments. But Gesa Stadium stood out to me from start to finish, in that nearly everyone I interacted with (fans and front office) exuded a genuine, easy-going warmth. Maybe I just happened to be there on a good night, but this sense of connectedness and camaraderie permeated the environment and went a long way toward my overall enjoyment of what, all things considered, is a fairly pedestrian ballpark. I had never been to Washington’s Tri-Cities before, and I don’t know when I’ll be back, but I left with the distinct impression that it’s a good region to live, work and, of course, watch baseball. Thumbs up to Pasco, Kennewick and Richland. Thumbs up to the Dust Devils.