Have you ever read an old hardcover book in which the first word of each chapter is capitalized with an oversized and ornately furbished letter? Such an approach always appealed to me aesthetically; let’s see if it works well on the blog.

llentown, PA is just one of many American burgs in which populist discontent is on the rise, with average citizens banding together in order to fight for the causes they believe in. And what cause is more vital to a healthy society than Triple-A managerial intrigue?

In 2011, the Lehigh Valley IronPigs enjoyed their first winning season in franchise history while playing under the watchful eye of Hall of Fame Chicago Cubs second baseman Ryne Sandberg. But Sandberg’s name is currently being bandied about as a Major League managerial candidate (including St. Louis, of all places), leading to fears that he will soon abandon the Lehigh Valley faithful. 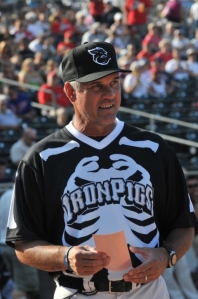 Lehigh Valley fans have a bone to pick with Ryno

In an effort to retain Ryne Sandberg as manager of the Lehigh Valley IronPigs in 2012, IronPigs mascots FeRROUS and FeFe are offering a year’s supply of free pork to Sandberg should he return for a second season as the IronPigs’ skipper. The mascots also launched an “Occupy Ryno” campaign on Facebook and Twitter issuing fans with the following question: What would you give up to keep Ryne Sandberg as IronPigs manager?

The IronPigs Facebook page is awash in fan comments regarding what they would give up in order to keep Ryno, and the level of self-sacrifice on display is truly stunning. My favorite:

I would give up my coupon for a free roast beef and cheese that I received 2 years ago when Andy Tracy was the RBI guy of the game.

But even better than the fan comments are the (possibly photoshopped) “Occupy Ryno” protest posters. A smattering, which in this case means “two.” 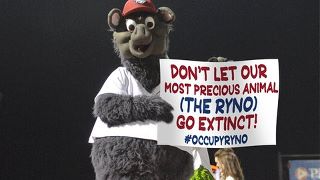 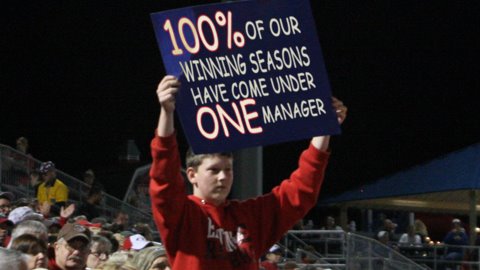 It will be interesting to see if this allegedly mascot-created uprising influences Sandberg’s decision-making process. A year’s supply of pork is a pretty tough thing to turn down, even if it’s a bit disconcerting that pigs are the one making the offer.

But outside of this bit of willing self-cannibalization, things remain pretty slow on the Minor League news front. This is a time of year to recharge and then GET MOTIVATED, making this recent offering from Ballpark Rob and the Round Rock Express especially apropos.

Finally, we are rapidly approaching that magical time of year known as Hot Stove Banquet Season! The RiverDogs announced yesterday that John Smoltz would be their guest of honor. Any teams out there that can match (or top) that level of baseball celebrity?

And keep in mind that yours truly is available for any and all engagements, so long as I am paid in pork.