Hello, and welcome back to this “live” report from Tradition Field, home of the St. Lucie Mets. 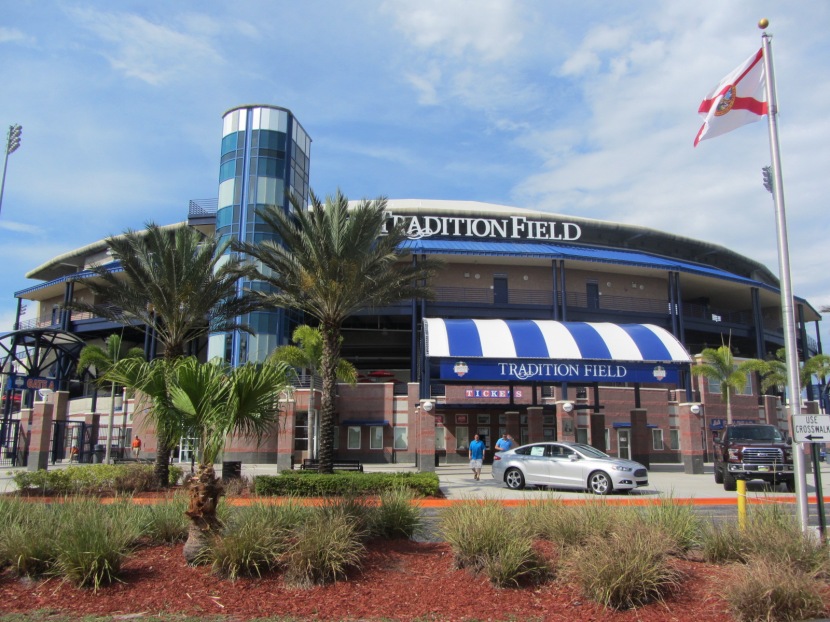 The previous dispatch in this series covered an array of pregame sights and sounds. Now, we remove the “pre” from the equation. It is officially game time here in St. Lucie (and, no, it’s not Larry David Lookalike Night).

Further down the third-base line, fans can watch the game from the comfort of the Tiki Bar.

I am never able to watch the games I attend, however. There is always wandering to do. An early bout of wandering this evening occurred alongside St. Lucie Mets general manager Traer Van Allen, who, over the years, has accumulated a 520-strong collection of bobbleheads.

“After spending this long in the industry, it’s really taken on a life of its own,” he told me. “I give them all a home. I don’t care what team it is.”

While Traer collects bobbleheads with an indiscriminate flair, there is of course an inevitable St. Lucie bias. The “Banana Phone,” for example:

If you’re wondering why a Banana Phone would be honored in collectible figurine form, then you’re wasting valuable brain space. But, nonetheless, I’ll satiate your assumed curiosity via the posting of this excerpt of my 2010 “Promo Preview” column that explained the phenomenon:

St. Lucie Mets (Florida State League)
Banana Phone Giveaway, Sept. 6
All season long, the St. Lucie Mets have played Raffi’s “Banana Phone” whenever the opposing team makes a call to the bullpen. The fan base has responded to this unorthodox musical choice, doing improvised banana phone dances in the aisles and, in extreme cases, bringing bananas to the ballpark. Now everyone can get in on the act as the team will be giving away custom-designed banana phones on Monday. These cheerful anthropomorphic bananas feature a (non-functional) keypad on its belly and are sponsored by Humana. Therefore, it’s the Humana Banana Phone. Don’t let the opportunity to procure one of these items “potassium” you by.

So there you have it.

Mary Lou, a long-time St. Lucie Mets game-day employee, is unofficially known as the “world’s oldest intern.” A retired General Motors test driver from Michigan, Mary Lou began working for the team in 1997 and has done everything from maintenance work to running in-game promos to picking players up from the airport to, yes, wearing the mascot suit.

(Trigger Warning: This photo depicts a mascot without its head on.) 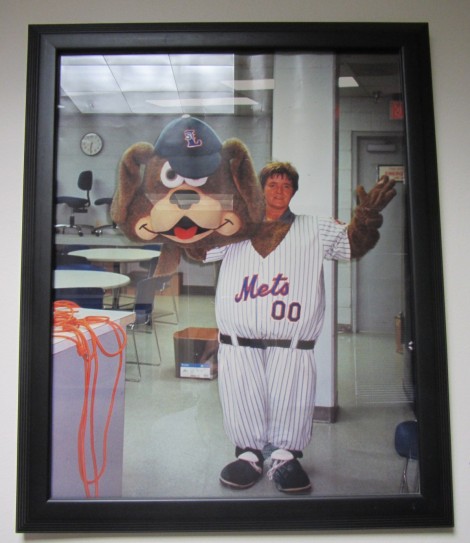 I caught up with Mary Lou later in the evening. A St. Lucie Mets legend!

Upon emerging from Traer’s lair of bobbleheads, I struck up a conversation with Gayle and Jack Fishbein. They’re the fans with the candy. 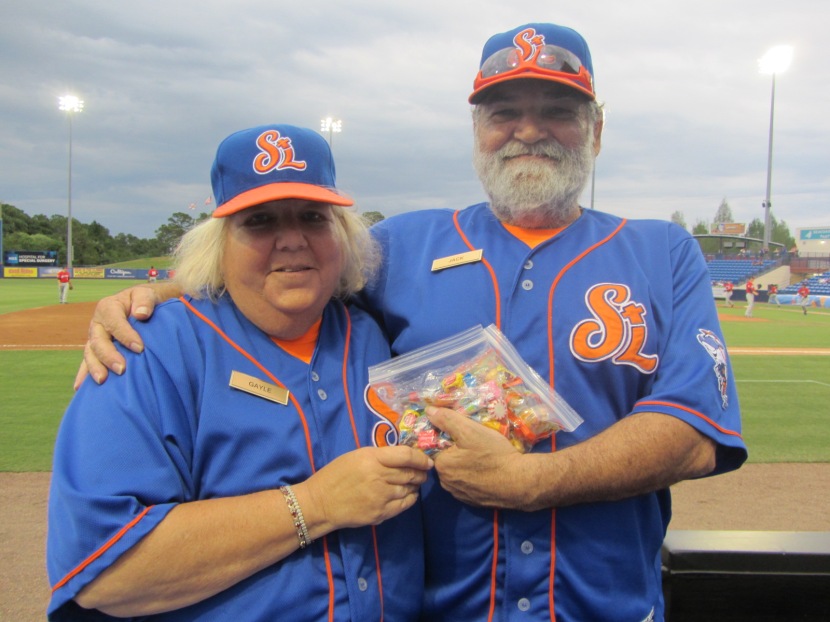 I wrote a feature on the Fishbeins for MiLB.com. Again with the relevant excerpt:

Gayle and Jack always bring full-to-bursting Ziploc bags of candy to the ballpark, distributing them to the players as they’re warming up and socializing on the field prior to the start of the game. From Dubble Bubble to Tootsie Rolls, Starburst to Laffy Taffy, they’re equipped to meet the sweet-toothed desires of every St. Lucie Mets player.

No one, least of all Gayle and Jack, would argue that candy is good for the players’ health. But baseball players are known for their oral fixations, and candy is a far superior alternative to chewing tobacco. Tobacco products are banned in Minor League Baseball, but some players maintain the habit nonetheless. Gayle and Jack want to make sure that there is always an alternative, however. As the St. Lucie Mets players move up the Minor League ladder, and, perhaps, make it to the Major Leagues (where tobacco is still permitted), the Fishbeins hope the candy habit will take precedence over the far more dire possibility of being addicted to tobacco.

Oh, and here’s Grace, a familiar figure at Tradition Field.

Next up on the evening’s agenda was to meet my designated eater (you know, the individual who consumes the ballpark food that my gluten-free diet prohibits). His name is Jay Meyer, and my next post will be dedicated to his exploits.

By the time Jay and I had parted ways, it was raining heavily and the tarp was on the field.

The deluge caused some fans to head for the exits. Because that evening’s “K Man of the Game” had indeed struck out, fans were entitled to a coupon good for a free Taco Bell taco. This brave employee was on hand to make sure that these fans got what they were entitled to.

The game was official at this point — the Mets had a 7-3 lead over Brevard County in the bottom of the fifth — but the show must go on. After a 59-minute rain delay, the tarp was taken off the field. The cessation of play had given way to the resumption of play. 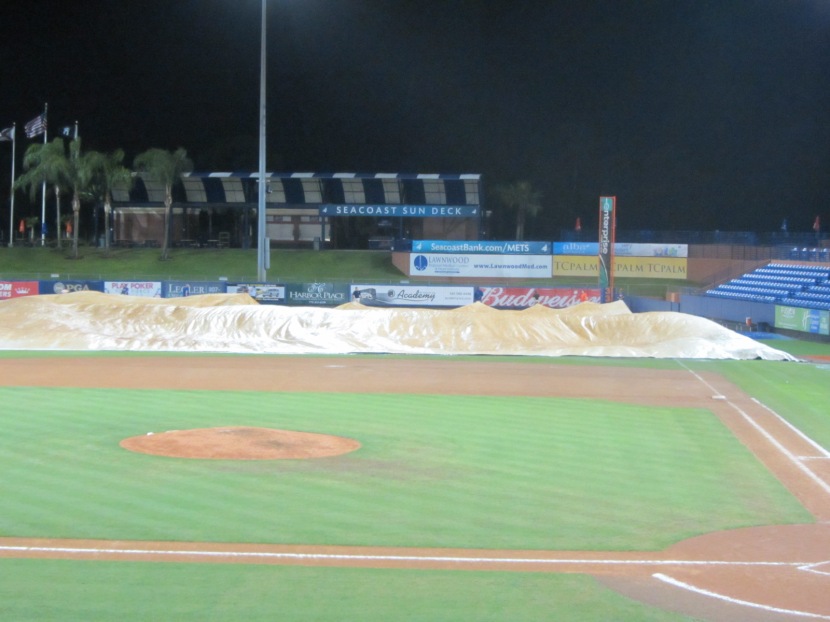 With very little to do at this point, I rambled back to Mulligan’s Bar and Grill and cracked wise amid the desolation.

Your groundbreaking and subversive ballpark joke of the day. https://t.co/fpznc5eLT3

I then introduced my self to a concession stand lizard. I had never seen one of those before.

Finally, I helped myself to a front-row seat so that I could read up on the latest dugout news. 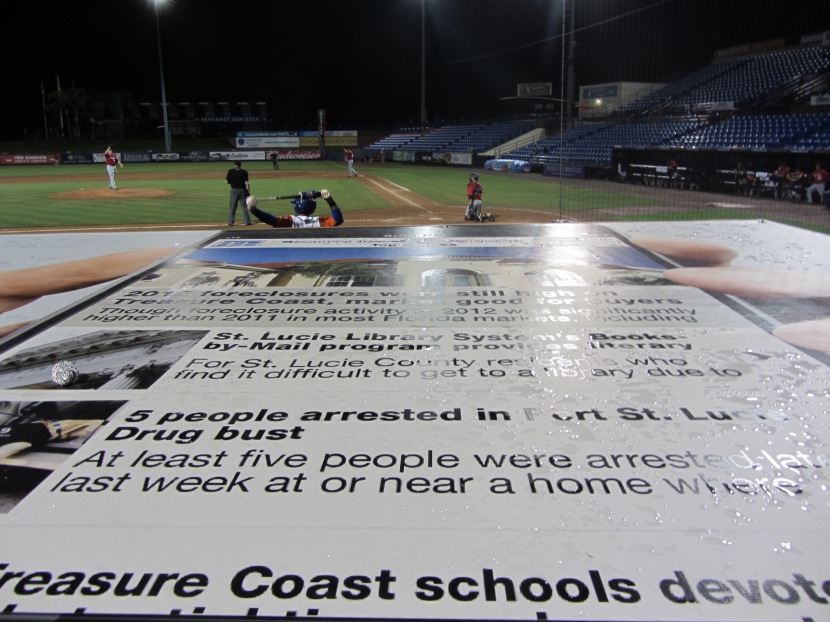 A pair of rehabbing New York Mets pitched the eighth and ninth inning for St. Lucie: Vic Black and then Bobby Parnell.

Bobby Parnell on the mound for the St. Lucie Mets https://t.co/yYZ3JK6SWz

Finally, some four hours after the ballgame began, it ended. 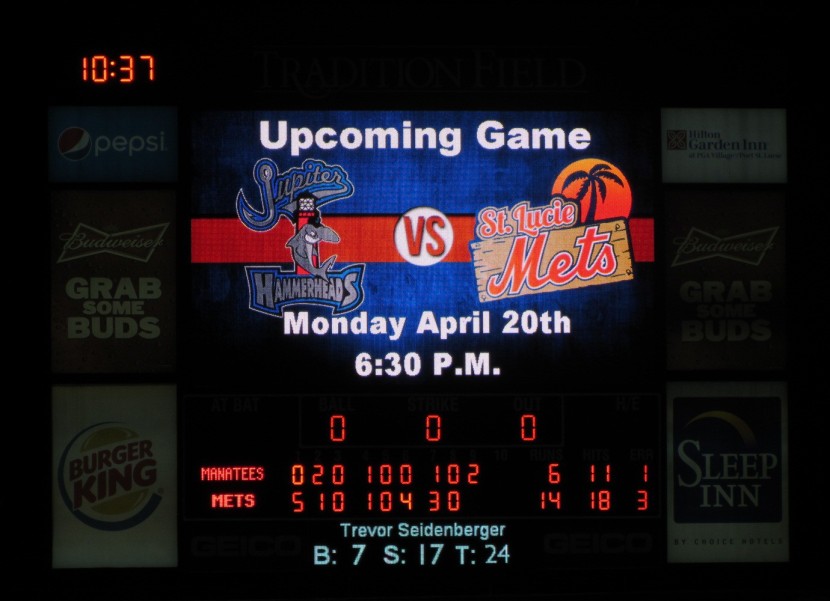 And to all those fans who left during the rain delay — you lose! After play resumed St. Lucie crossed the 10-run threshold, meaning that fans who stuck it out to the end received both the “‘K’ Man of the Game” free taco and a “10 Run Rule” free chicken sandwich.

Whether you enjoy eating such fast food fare is beside the point, it’s just the principle of the thing. Never leave a game early. You never know what you’ll miss out on.

Like, you know, a Banana Phone Call to the Bullpen!

But that’s the real issue here: we’re dealing with the end times.

A handful of teams are currently immersed in the playoffs, but that’s just a postponement of the inevitable. The offseason — that endless abyss! that unfathomable void! — has opened up its voracious maw and will soon consume us all.

But not yet. I’ve got plenty of in-season content left over, carefully pickled and preserved, and I intend to dole it out sparingly.

Since we’re on the topic of “the end times”, check out the so-called “Aqua-palypse” that recently befell Gwinnett County’s Coolray Field. This was the culmination of a season-long bullpen vs. promo crew battle, and none were spared:

And then there’s this, a kilt-wearing skipper:

That’s Mark Haley of the South Bend Silver Hawks, participating in the Ronald McDonald House “Men in Kilts” fundraiser. He wore the outfit during August 27’s ballgame in order to raise money and awareness; further info can be found at meninkilts.org (don’t make the same mistake I did and type in meninkilts.com. This will lead you to a Vancouver-based window and gutter cleaning service).

I’ll leave you with photos of two unique late-season giveaway items. The St. Lucie Mets gave away a custom Banana Phone (inspired by the Raffi song of the same name, an unlikely ballpark standard at St. Lucie’s Digital Domain Park):

In Bowling Green, the iconic “What Could’ve Been” Cave Shrimp made a triumphant return in 2010. This time as a stoic figurine:

We live in the age of the mash-up, and if this thoroughly 21st-century concept ever makes its way to the Minor Leagues then I would like to make the following suggestion:

That thing could blow some minds, and if some graphic-design wiz out there could send me a conceptual drawing I’d really appreciate it.