All of two days ago, I did a relatively lengthy post on the Hudson Valley Renegades‘ new “Chili Davis Wrap”. But, my adoring public wanted more, so more I will now give. (Click here — or just scroll down — to bring yourself up to speed on this culinary masterpiece).

Joe Ausanio, the creator of this intriguing new concession stand item, was kind enough to respond to my Chili Davis Wrap-related queries.

“It was kind of funny how it all transpired,” he wrote. “We were talking how we love chili
cheese fries but they are such a mess to eat. I said ‘Hey, lets throw it in a
wrap and contain it’. Then, of course, the rest was history.”

Ausiano was also kind enough to send along a few photos. Here, we see the wrap in an embryonic stage:

Next comes the addition of the titular Chili: 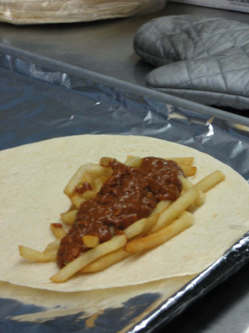 And, then, finally, the cheese:

Man, this is making me hungry. Anyone have a spare $6.67 lying around so I can run up to Hudson Valley and get one of these? Actually, maybe I’ll buy two, and send the second one to Chili Davis so that he can autograph it.

Have a great weekend, everybody.

In a little more than a week, four short-season leagues (New York-Penn, Northwest, Appalachian, and Pioneer) will kick off their 2008 campaigns. For someone who covers the Minors, this is always a great time of year, simply because there is that much more to write about.

Today, I’ll get an early start on short-season coverage by directing your attention to a spectacular culinary creation that will be debuting at Hudson Valley’s Dutchess Stadium this season: the Chili Davis Wrap.

American cheese. It is named after the great Chili Davis — who hit 350 home runs during a distinguished 19-year career — and it costs $6.67.

If you are now asking yourself why the Hudson Valley Renegades have named a food item after an individual with no connections to the organization, then I suspect you are not alone. Like greater men have done before me, I now defer to the press release in order to explain this most confusing situation:

The Renegades Director of Food and Beverage Joe Ausanio spent two
seasons with the New York Yankees (1994 and ’95). During his two years
of Major League ball he worked as a set-up man…

Okay, that’s pretty interesting. I am wondering where this will go next.

Davis faced off against Ausanio three times throughout his career,
accumulating a .667 batting average (2-for-3) with two home runs and a
strikeout. Calling Davis’ two hits homeruns is a little bit of an
understatement; they were rockets that landed a combined 1,000 feet
from home plate.

Oh, awesome! Could it be that this menu item was born out of vengeance?

Now it’s Ausanio’s turn to send Davis to the bleachers. Come out to any
home game this season and see if you can do what Ausanio was unable to
do … handle Chili Davis. See if you can handle a hearty helping of
chili mixed with some of the best fries this side of the Mississippi
drenched in some good old fashion American cheese all held together by
a flour tortilla.

Yes, it was! You’re not so high and mighty now, are you Chili Davis? How’s it feel to have gone from a respected power hitter to a menu item at a Minor League ballpark? Not too good, I bet! And, before I ruminate any further on the stunning transformation of Chili Davis — what is up with that $6.67 price?

This amazing Renegades signature wrap will be sold at the main
concession stand located behind first base for $6.67 (Davis’ batting
average against Ausanio).

Oh, right. Well, at least they used batting average instead of slugging percentage. A $26.68 menu item would be a little out of my price range.

And, in all seriousness, kudos to the Renegades for offering this simultaneously awesome and hilarious menu item.