At each Minor League ballpark I visit, I recruit a designated eater to eat the ballpark cuisine that my gluten-free diet prohibits. At Columbia’s brand-new Spirit Communications Park, that individual was 16-year-old Carter Blackmon. Carter was attending the game with his Dad, Nathan, a well-known (some would say legendary) figure in the world of Minor League Baseball. He spent eight seasons (1997-2004) as the International League’s assistant to the president before transitioning to a then-fledgling website by the name of MiLB.com. Nathan, officially, is the site’s “director of MiLB initiatives.” If you work in Minor League Baseball, then you probably know him.

Now let’s get to know Carter, who lives with his Mom and Dad and two sisters (one of whom is his twin) in the town of Waxhaw, North Carolina. Carter is licensed to drive, plays offensive tackle for his high school Parkwood Rebels and says a “perfectly cooked cheeseburger” is his favorite food. Carter also told me that he “likes” to fish, which prompted his Dad to say, “Like to fish? You fish at least three days a week. It’s more than ‘liking.'” Carter then conceded that he loves to fish, and proudly showed pictures of some of his latest bass conquests from the ponds of Waxhaw. The biggest bass he’s caught in the region was eight and a half pounds.

Fish wouldn’t be on the menu tonight, but barbecue was. With Fireflies VP of marketing Abby Naas serving as our guide, we began our journey at the Fireflies’ “Low N Slow” cart.

From this cart, Carter was given a pair of sandwiches. The Pulled Pork is topped with a sweet and spicy barbecue sauce, utilizing a recipe developed by Fireflies president John Katz. The Beef Brisket has a tangy “Carolina Gold” sauce.

Have at it, Carter.

“Oh, dang. That’s good,” said Carter, of the pulled pork. “The sauce is excellent — sweet with a little bit of tang at the end.”

He was an even bigger fan of the brisket, as he deemed the Carolina Gold sauce to be “too good for words.”

“If I had to use one word, it’d be ‘extravaganza’,” he continued, after giving the semantics a lot of thought. “It’s like a little mustard and a little barbecue thrown into one.”

Carter is a barbecue aficionado and says that if you’re ever in Waxhaw (hey, you never know), then Jo Jo’s and the Rock Store are both good places to check out. After prompting from his ever-watchful father, he added that “Mom and Dad’s is also a pretty good place to eat.”

Next up was a pair of tacos from the “El Toros” stand, so-named because “toro” means “bull” and the Fireflies’ Spirit Communications Park is located on Bull Street.

“We go to Salsarita’s a lot, so I’m experienced with tacos,” said Carter, referring to the Mexican restaurant chain. “I love tacos.”

He then showed his love for tacos by tearing right into one. I believe it had chicken in it, while the other one had pork. 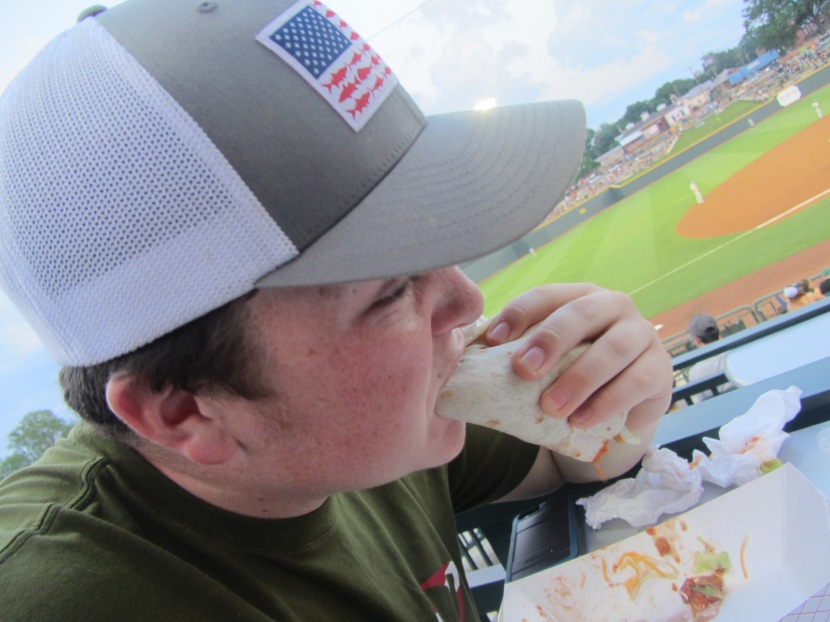 Carter declared the pork taco to be superior, because the “meat was better seasoned” and had an overall “bolder flavor.” Eating the pork taco also led to an important culinary discovery.

“The black beans made it good, too, and usually I have tacos with no beans,” he added.

At this juncture I was called away from my designated eating duties to participate in a karaoke contest atop the dugout. I featured this video in my last post and I’ll feature it again here, as it was one of the greatest triumphs of my life.

The above contest was hosted by Fireflies executive vice president Brad Shank, and upon returning to Carter and Nathan I found that Pork Shank (no relation) was waiting for us. Pork Shank was joined by Tri-Tip Sandwich. Both are available in the upper-level suites. 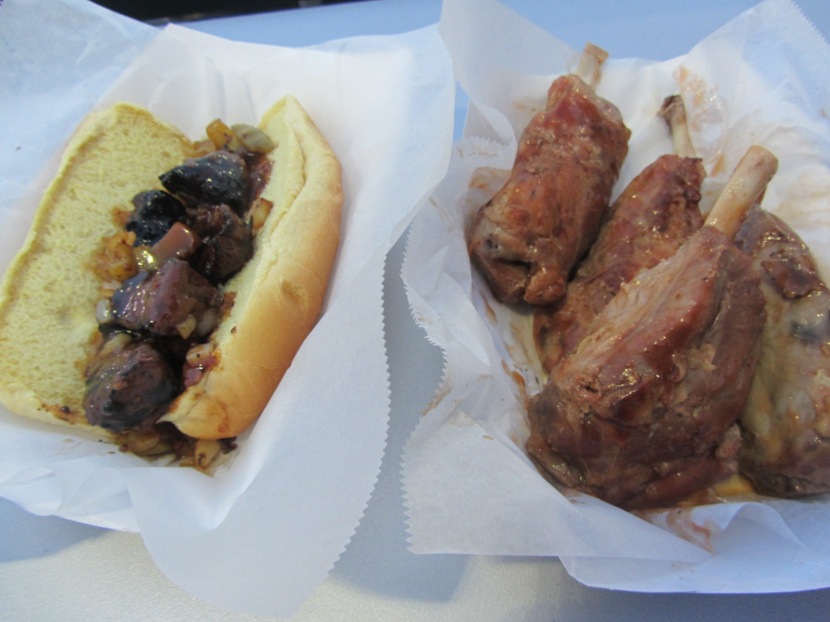 I asked Carter to pose with the tri-tip in the same manner in which he would pose in his football uniform. Focused, determined, unstoppable.

Carter said the tri-tip “had a nice crust around the meat. The grilled onions were great, and the sauce excellent.”

As for the shanks, I went ahead and tried ’em myself. Carter, meanwhile, played the role of cinematographer.

In which my designated eater turns the tables on me, @ColaFireflies https://t.co/DkRVqE1cji

“Very meaty,” it says in my notes. “Not much seasoning. Tender. Overwhelming.”

(I assume I was writing about the shanks there, and not brainstorming the “About Me” section of my online dating profile.)

Carter was unable to eat dessert, unfortunately, as he still has five years to go before he can legally sample Mocha Chocolate Moonshine and Caramel Moonshine ice cream. This creamy alcoholic dairy product is produced locally by JB’s Pr%f. 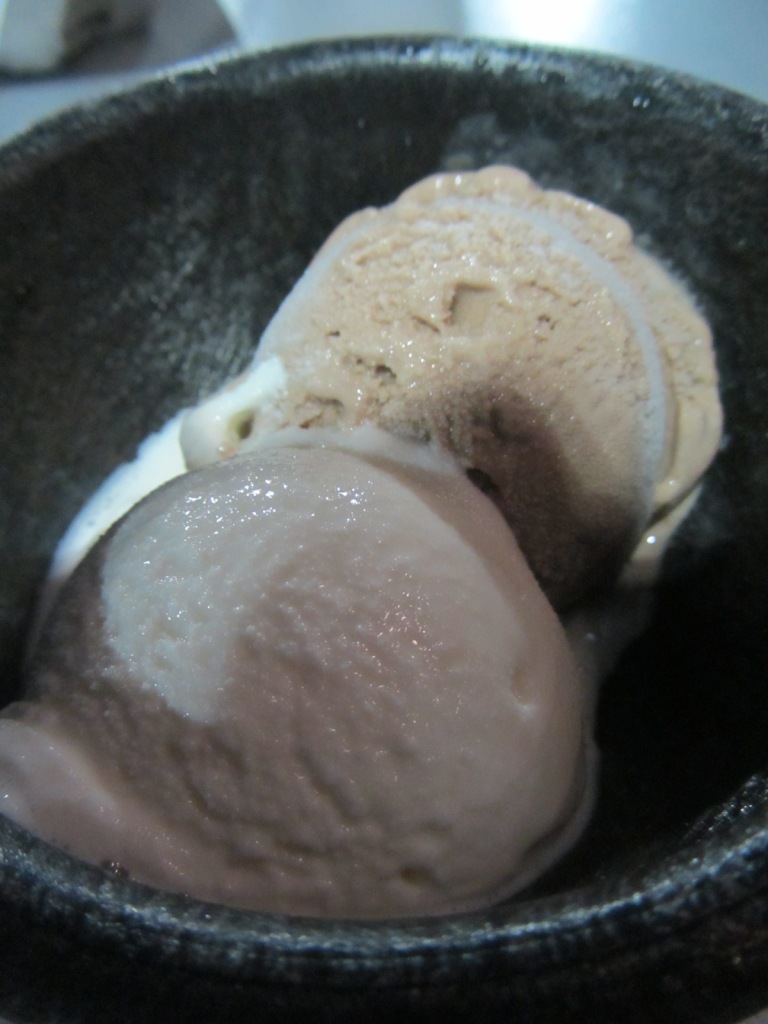 Nathan, ever-helpful, was happy to step in.

Nathan’s impish grin in the above Vine pretty well sums up how the moonshine ice cream tasted.

Speaking of summing up: Carter said that, when it came to the designated eating experience, “Shoot, I don’t have any words. It left me speechless. I started to like new things. It was a journey of discovery.”

And that, at the end of the day, is what it’s all about. Shanks for everything, Carter. 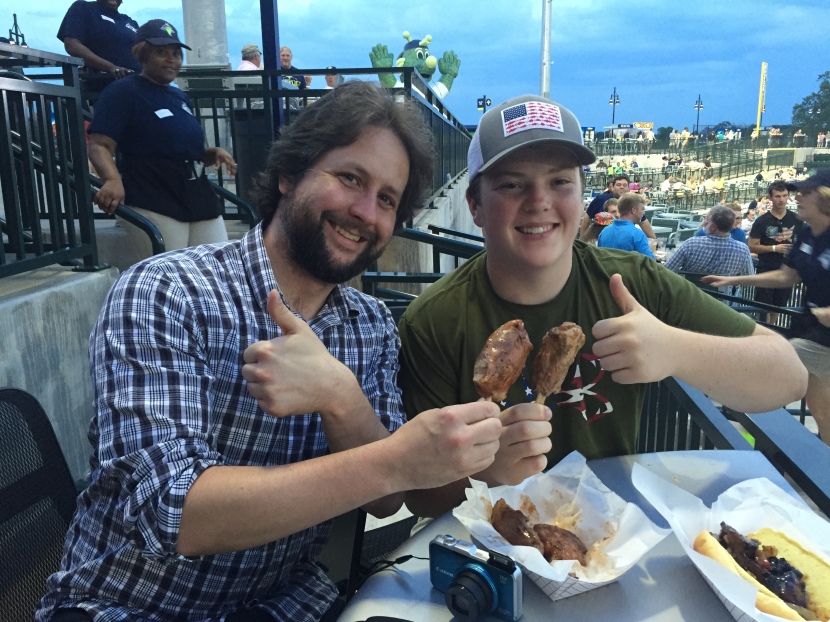 North and South Carolina are both great states for Minor League Baseball. It’s a region I would highly recommend visiting, regardless of circumstance. But my May trip to the Carolinas was motivated by a specific circumstance, and that circumstance was this: a new stadium in Columbia, South Carolina.

That stadium is Spirit Communications Park, home of the Columbia Fireflies (who formerly existed in the form of the Savannah Sand Gnats). The ballpark is located on the grounds of an abandoned mental hospital, and the Fireflies are the focal point of a development project that aims to turn this area into a massive “live-work-play” downtown destination.

I arrived more than three hours before the game, at a moment in time when the sky was ominous. The spirits communicating above the park must’ve been in a bad mood.

Well, there it is: Spirit Communications Park, home of @ColaFireflies pic.twitter.com/q22nJF2e4T

This auspicious structure, located beyond right field, was once the main building of South Carolina’s state mental hospital. The brand-new building to the left, which recently welcomed its first tenants, features views of the field from its opposite side.

This is the area leading up to the ballpark’s front entrance. Clearly, there is much left to develop.

I’ve already written a sprawling MiLB.com article detailing my visit to Spirit Communications Park. In the interest of not being redundant, repeating myself or being redundant, the remainder of this post will be short on information that can be found within the article.

With Fireflies president John Katz as my guide, I took a lap around the stadium. 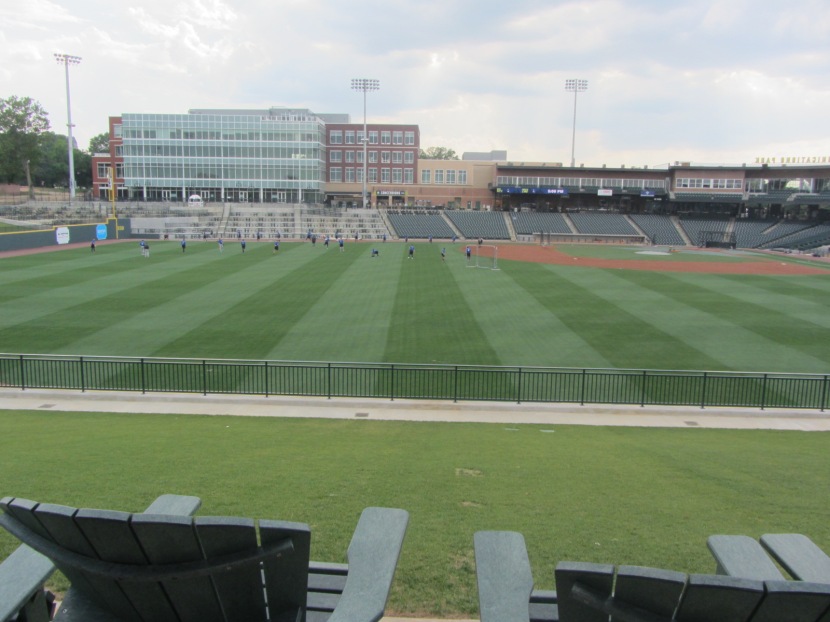 This is the view from behind the ballpark. I repeat: There is much left to develop. The ballpark is in the middle of the 150-acre former mental hospital campus.

Spirit Communication Park is fairly straightforward in its overall layout and design. One of the most noticeable quirks are the wild juts and severe jags of the outfield fence.

Some 90 minutes until game time, the skies opened up and there was a mad rush to put the tarp on the field. It was a passing storm, however, and while it may have affected the walk-up sales it did not delay the start of the ballgame.

Once the rains came, Katz had to suspend our tour in order to help out with the tarp-pulling process. He left his walkie-talkie in my possession, which led to me discovering that within the Fireflies hierarchy he is “El Jefe.”

With the tarp secured, I reunited with “El Jefe” in the front office. Amid the general pregame hubbub, it was discovered that a scheduled English class for Latin American Fireflies players had no place to meet. Katz told them to go ahead and use his office. A great Minor League Baseball moment.

Upstairs, there is a 7000 square foot Club Lounge, used year-round for all manner of events.

The view from the top. 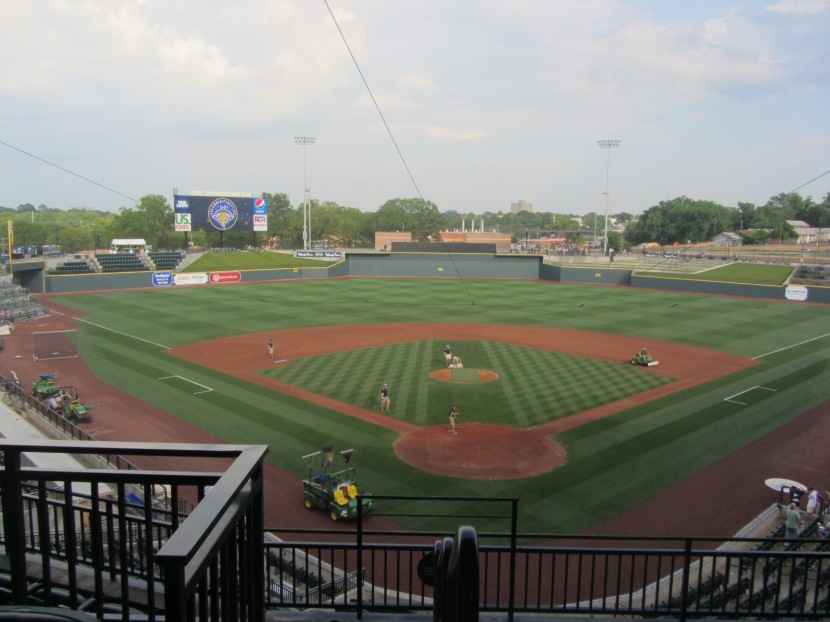 I parted ways with Katz shortly after the gates opened, and just kept wandering. Back on the concourse, I snapped a picture of the team’s recently-procured firetruck (they are the “Fire”flies, after all). This will be utilized at community appearances and parades and whatnot. The Fireflies join at least one other Minor League team — the Peoria Chiefs — in firetruck ownership. 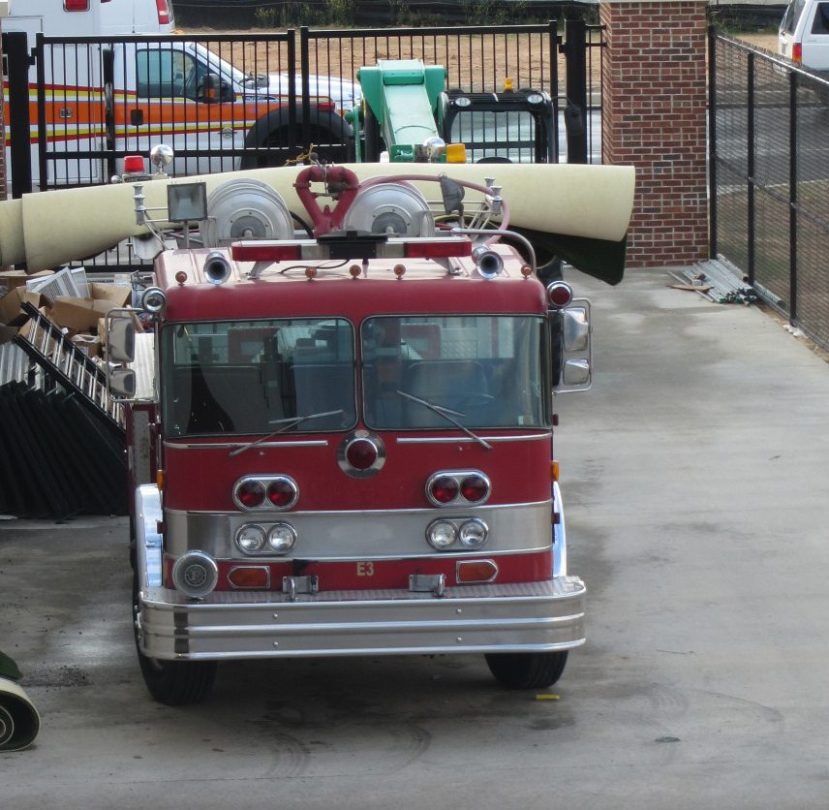 Most of the early arriving crowd were Thirsty Thursday imbibers, congregating around the Budweiser Bow Tie Bar.

Lawn Pong — a.k.a. Jumbo Beer Pong — was being played on the grassy area behind the bar.

On the outfield concourse I ran into Matt “Possum” Campbell, a long-time friend of this blog and two-time designated eater (with the Charlotte Knights and Kannapolis Intimidators). Matt, ever-thoughtful, had brought me a gift: a Weird Al Simpsons figurine. Two of my all-time favorite things, combined!

With Weird Al stowed safely in my pocket, I made my way behind home plate for the start of the ballgame. The Fireflies players had just been introduced to the strains of “Light ‘Em Up”. 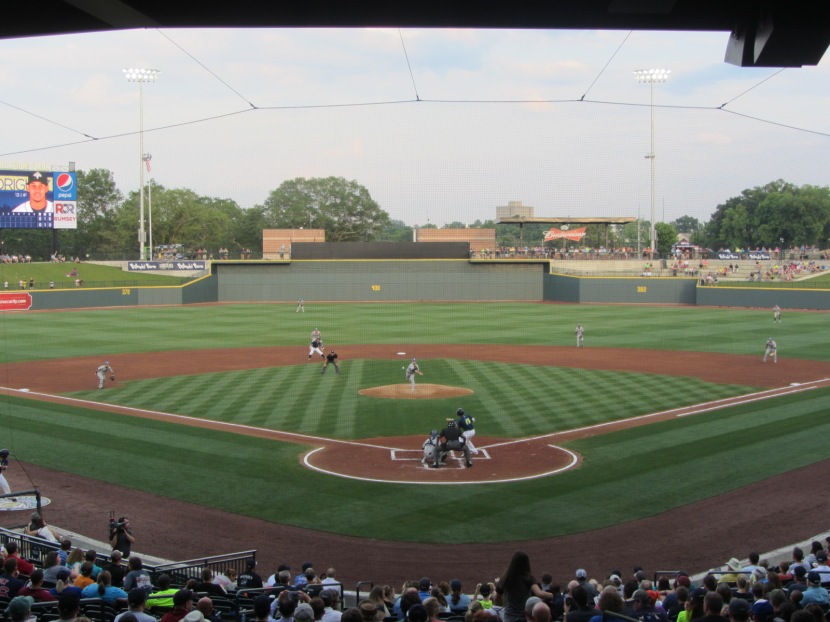 Mason, the most luminescent mascot in Minor League Baseball, was there to greet me as the game began.

I spent the first several innings of the game with my designated eater. This, of course, will be documented in the next post. At one point I had to briefly abscond from these duties in order to participate in a karaoke contest atop the dugout. This, right here, was an all-time career highlight.

The rest of the evening was a blur. All I can say is that it was a beautiful night…

…and that at one point a bunch of humans ensconced within inflatable orbs were running all over the field. 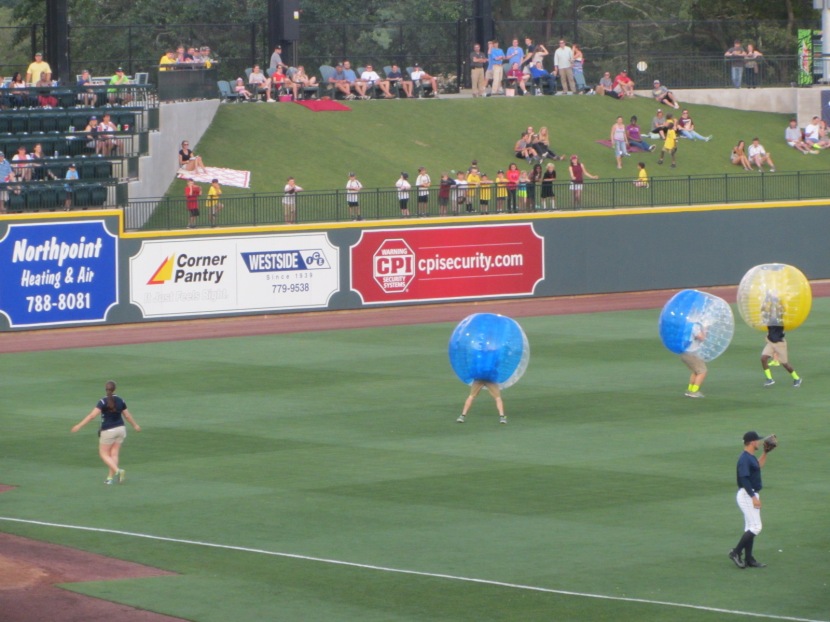 I’m pretty sure I took this picture just because I love how this dude spells his first name.

The “best shoes of the night” award, which I have never before bestowed, goes to Fireflies director of facilities Edward Keen.

As the ballgame ended, I wandered past a large pile of deflated plastics. This was my cue to exit. Nothing left to see here.

All that was left to do was write and disseminate a groundbreaking and subversive ballpark joke.

And with that, it was time for me to glow back to the hotel. Get it? Because fireflies “glow”? It’s always good to end on a high note.

This season, when I’m on the road, I’ll write an on-the-spot blog post about each Minor League ballpark that I visit. Then, upon my presumed return home, I’ll provide the multifaceted blog coverage that you have come to know and, perhaps, love. Let’s get to it, lest it get to us!

May 11: Spirit Communications Park, home of the Columbia Fireflies (Class A affiliate of the New York Mets)

Spirit Communications Park, from the outside:

Spirit Communications Park, from within:

Culinary Creation: Myself and designated eater Carter Blackmon, about to chow down on “Hog Hammer” pork shanks.

At Random: A pregame English class for Fireflies players, conducted in the office of team president John Katz

Your Groundbreaking and Subversive Ballpark Joke