A baby T-Rex threw out the first pitch at a Memphis Redbirds game earlier this month, using its mouth in lieu of comically disproportionate twig arms.

This prehistoric tosser of ceremonial baseball was at it again in Reading on Tuesday, taking the mound prior to an R-Phils game in order to promote his (or her?) involvement in the touring “Walking With Dinosaurs” arena spectacular.

Walking with Dinosaurs is right! This thing couldn’t throw a strike to save its life!

For your further amusement, I’d like to supplement the above video with three still photos (all of which are courtesy of Ralph Trout/Reading Phillies)

The T-Rex make its dramatic entrance:

Trying to focus, just before the big moment. 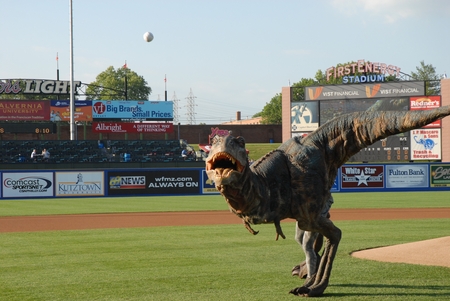 As usual, I am awash in blog-worthy material which I would like to disseminate. But let’s be honest: nothing could top that baby T-Rex. Therefore, I’m calling it a day.