The final wave of Minor League home openers are taking place throughout the country today and tomorrow, with many of them qualifying as bona-fide galas.

The Reading Phillies certainly had a lot going on. The club rang in a new era yesterday, as fans finally got a chance to check out the many improvements  made to 60-year-old FirstEnergy Stadium as part of a $10 million renovation project. Churgers were chomped, the mascot band rocked, and the first 3500 entrants received a “Ryan Howard Garden Gnome” figurine.  But one fan got to take home a 550-pound life-size version. Behold:

And behold some more:

Update: In a disappointing but perhaps fitting bit of irony, the Storm Chasers had to postpone their home opener due to inclement weather.

The first 2500 fans receive welcome mats emblazoned with the stadium logo, and one of the guests of honor is none other than part-owner Warren Buffet. The Opening Day festivities started early this morning, with the Weather Channel broadcasting live from the stadium between 6 and 9 a.m. Say what you will about the new team name, but suffice to say that no national broadcasts would be taking place at the home opener of a Minor League team named the Royals (save for Will and Kate-obsessed British tabloid television, but they’ll broadcast from just about anywhere). 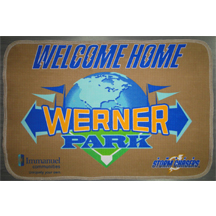 Another Pacific Coast League opener of especial significance is going down in Tucson, as the Padres play their first game at Kino Stadium after re-locating from Portland. The evening will begin on an emotional note, as the team is staging a stirring tribute to local heroes:

With Opening Night falling just three months after the tragic events of January 8th, the Tucson Padres will honor many people associated with the shooting. The following five people will throw ceremonial first pitches:

Daniel Hernandez: The intern who helped save the life of Congresswoman Gabrielle Giffords

Patricia Maisch: Tucson resident who helped contain the shooter after he was tackled

Joe Zamudio: Tucson resident who jumped on the shooter to contain him

In a similarly community-minded move, the San Jose Giants have dedicated the month of April to critically-injured fan Bryan Stow. Stow, who was attacked at the Los Angeles Dodgers home opener and suffered serious injuries, has been a familiar presence at San Jose’s Municipal Stadium.

The San Jose Giants will collect donations throughout the month of April to benefit the fund established to support Bryan and his family with a special tribute planned for Opening Day, April 14th at Municipal Stadium.

“Bryan has contributed so much to the safe operation of Municipal Stadium. He has been the first person to respond to any injuries in our ballpark and has provided outstanding medical assistance to all of our fans.” said Jim Weyermann, President and CEO of the San Jose Giants. “He is a member of our family and needs our help and prayers. We intend to be there for him in the same way he has been there for our fans, hand in hand, working together to make sure that he and his family don’t have to go through this alone.”

One of the beautiful things about attending a Minor League Baseball game is that there is equal room for wacky and the somber. But when it comes to blogging about it all, I often struggle to find an appropriate tone when dealing with such disparate subject matter in the same post.

That said, I’d like to close the blogging week by bringing your attention to one of my favorite press releases of the year. In Tuesday’s post I wrote about the Lancaster JetHawks’ “Sweet Po-Tater Tots”, and the very next day this appeared.

Between Taters and Later

That’s me all right — a national reporter/blogger who will now spend the weekend showing skeptical club doormen a crumpled print-out of the JetHawks press release.