We haven’t yet hit the ides of March, but nonetheless all eyes in March are firmly gazing into the Opening Day distance. This post highlights just a few of the many, many season-starting initiatives that teams have up their sleeves.

Johnny, Cash: 2013 marks the Fort Wayne TinCaps’ fifth season, and to celebrate they are giving away $5000. 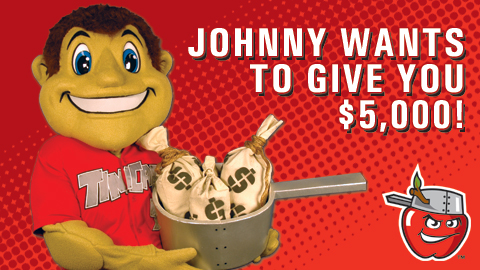 In a press release, the TinCaps explained how this is all going to go down.

As fans enter the ballpark on Thursday, April 11th, each will receive a scratch-off card as part of the qualification process. Certain cards will be designated as instant winners, with those fans receiving a TinCaps game-worn red jersey, which the team will be wearing that night. The TinCaps red jerseys are a part of history, as each player ever to play for the team since 2009 has worn these jerseys.

Once these select fans are determined, the final $5,000 winner will be selected from among the jersey winners. The final selection process will be announced at the game on Opening Night.

But, as with any promotional endeavor worth its salt: THAT IS NOT ALL. The TinCaps are currently staging a scavenger hunt, the weekly winners of which will pre-qualify for the $5,000 prize. Read all about that HERE.

And then there are the Indianapolis Indians, who are offering fans the chance to vote on the Opening Day field design. The choices are Cell Cut, Checkered Cut, Diamond Cut, and the Phillies Cut. They are all very attractive choices, so you can’t really go wrong, but I suppose I’d go with the Cell.

But Opening Day pomp and circumstance goes beyond the parameters of the playing field, of course. The Memphis Redbirds are currently running a contest on Facebook, with the grand prize being a swank VIP limo ride to the ballpark.

Meanwhile, in Scranton/Wilkes-Barre, just about everything will new in 2013. Read all about it in my MiLB.com piece! But one aspect of the SWB re-invention I didn’t get around to in the piece is the mascot situation. Two new characters are all set to debut and, of course, they need a name.

For the record, the character on the left is a “nine-foot tall superhero” while on the right is a “furry porcupine.” I’d call the former “108-Inches Man” and the latter “Quill Rogers.”

If I make this sentence long enough, this one that you’re reading now, then I’ll have reached my self-imposed 400 word minimum.

A common water cooler topic amongst baseball fans with access to water
coolers and the inclination to use them is this:

“If you were a
professional baseball player, what would your walk-up music be?”

The
Tulsa Drillers recently put that question to members of their own front
office, resulting in a quick and funny YouTube video:

— But to return to the main topic of “interesting and easy-to-adapt ideas”, the Tennessee

Smokies have a good one in the form of their “2010 Starting Line-up Challenge.”

A good friend of mine, whose name rhymes with “Chess Varese”, will explain things from here:

This contest works for three reasons:

1. It involves the promise of cold, hard cash.
2. The promise of such cash will spur fans to familiarize themselves with this year’s crop of players.
3. This desire to learn about the players will serve as an incentive for fans to check out the team’s web, Facebook, and Twitter pages for more information about what’s been going on in Spring Training.

It’s a chain reaction of positive publicity that once again proves that money is the be all and end all.

— I apologize. Here it is this late in the post and I haven’t written anything about food. Let me rectify this grave oversight by mentioning that the Toledo Mud Hens unveiled their new 2010 food items yesterday. This highlight of this array of culinary delights is the Fifth Third Fanatic Freeze, consisting of 15 scoops of ice cream and an array of toppings. 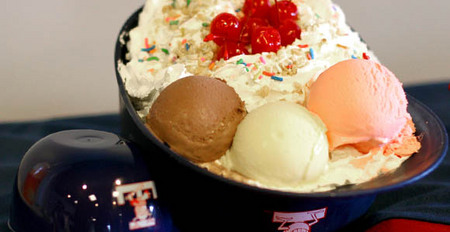 This massive concoction will be served at a concession stand with the peculiar name of Casey’s Creamery/Taco Hut. In my humble opinion, this establishment needs to start serving THIS immediately.

There is no escape from Taco In A Helmet.

As regular readers of this esteemed blog are well aware, there is nothing I like more than writing unsolicited commendations of Minor League PR innovations in exchange for little or no recognition. That’s what I was put on this Earth to do, and who am I to argue with my cosmic destiny?

Therefore, it is with great pleasure that I direct your attention to a novel and interesting contest that was staged by the Midwest League’s Kane County Cougars. At the start of the 2008 campaign, 96 former Cougar players had appeared in the Major Leagues. I’ll let the press release take it from here:

This past March, the Cougars began a “100th Cougar Contest” in
conjunction with the organization potentially reaching the milestone
this season. Fans were encouraged to submit a guess from a preselected
ballot of nine former Cougars who were on the verge of becoming

One of these pre-selected Cougars was right-handed reliever Jeff Gray, who played for Kane County in 2006. Gray made his Major League debut with the Oakland Athletics on September 8, and in the process became Cougar #100 to make it to the bigs.

Take it away, press release:

This is the first time I have ever heard of such an innovation, and it is definitely a good one. Focusing on alumni success in the Major Leagues encourages the team’s fans to follow former Cougars as they climb the Minor League ladder. Perhaps more importantly, it drives home the point that fans are watching future Major Leaguers each and every time they attend a Cougars game. Perhaps this is obvious, but it is a distinction that can be lost on casual fans, due to the fact that the level of play at Class A (and lower) often seems worlds away from “The Show”.

In Other News: Congratulations to the Fresno Grizzlies for winning MiLB.com’s “Promotion of the Year” for 2008. The club’s Mascot Showdown netted more than half of the 9,149 total votes cast, while the Lancaster JetHawks came in second with 23% of the vote.

Yesterday I stumbled upon a pair of excellent sports journalism-themed Minor League events, and since they both involve a team from the Mike Veeck-led Goldklang Group I figured I would cover them in tandem with one another.

Tonight in Fort Myers, the Miracle are hosting the first-ever “Miracle Journalism Camp”. From the press release:

“The camp will give 10- to 18-year-olds the chance to learn about sports
broadcasting and meet broadcast professionals from Southwest Florida…Professional writers, TV anchors, editors and photographers will talk
about their respective professions, how they got there and what the
campers can do to prepare themselves for a career in journalism.

The highlight of the camp will be the opportunity to cover that
evening’s Miracle game.

Campers will watch the game from the Hammond
Stadium press box and report on the game and their experience. Stories
will be reprinted on the Miracle’s website.”

Tonight’s event is at full capacity, and the club is already compiling a waiting list for next year. Obviously, this is a win-win situation. The camp provides aspiring sports journalists with a great opportunity to learn about the ins and outs of covering a game, while simultaneously generating increased fan interest in the Miracle.

Meanwhile…The Charleston RiverDogs announced the details of their “Fancaster Contest” yesterday. The club is currently accepting 1,000-word essays from fans who would like to try their hand in the broadcast booth. They will then select nine of these aspiring announcers, each of whom will broadcast one inning of August 23’s game against the Columbus Catfish.  Here are the rest of the details:

At the conclusion of the RiverDogs-Catfish game, nine fan video clips will be
uploaded and available for voting by 5 p.m. on Monday, Aug. 25 at
http://www.fancaster.com.

From Aug. 25-27, fans will have the opportunity to
vote for the best RiverDogs Fancaster fan video on http://www.fancaster.com.&nbsp; There
will also be a link on the RiverDogs’ website.

The winner will be
announced as the “RiverDogs’ Fancaster Fan of the Year” during Fan Appreciation
Night, which will be held as part of the RiverDogs final home game of the season
on Aug 27 against the Savannah Sand Gnats.

On the assumption a position
is available, the winner may be considered for a potential radio play-by-play
position for one of The Goldklang Group’s teams (Charleston RiverDogs, Fort
Myers Miracle, Sioux Falls Canaries, Brockton Rox, St. Paul Saints and Hudson
Valley Renegades).  Being named the “RiverDogs Fancaster Fan of the Year” during
Fan Appreciation Night does not guarantee future employment.

So there you have it folks…while the winner of this contest may not be guaranteed future employment, he or she will be guaranteed to win respect and admiration as a result of heretofore unrecognized play-calling skills.

Kudos to both the Miracle and the RiverDogs for staging events for their fans that are both fun and beneficial to professional development. That’s a hard combination to pull off.

The 2008 campaign is a big one for the venerable old International League, which, much like John McCain, is celebrating its 125th year of existence. This milestone will be commemorated in a number of ways, perhaps most notably when the Rochester Red Wings and the Syracuse Chiefs clash in the “Cooperstown Classic” at the Baseball Hall of Fame on May 18th.

But, for my money, even more intriguing is the IL’s recently announced fan photo contest. Starting on May 1, fans are invited to submit photos they have taken within International League ballparks. Each month, the best entry will be awarded with what is currently described as “an exciting prize package.”

This contest will surely result in a deluge of amateur photographs from aspiring shutterbugs around the country. In order to create order from the chaos, the league has divided the contest into several distinct categories. The category for May is “Ballpark Action”. This will be followed in short order by “Fans”, “Mascots”, and, my favorite, “Ballpark Promotions.”

Once again, this contest begins on May 1, at which point fans can submit their photos to http://www.ilbaseball.com/photocontest

I’m a fan of baseball, the International League, contests, photography, the internet and categories, so you better believe I’ll be keeping an eye on this throughout the season.

Also, lest I forget…New Promotion Preview column out now. Click here, and make sure to cast your vote for the week’s best.