All of this is to say is that my various season retrospectives (“look-backs,” as we call ’em in the biz), have culminated with this: the naming of the Dallas Braden Bobblebelly as 2011’s best promotion.

Art Imitates Life: the Dallas Braden Bobblebelly juxtaposed with the moment that inspired it.

I’ve written about the Bobblebelly plenty already, from this blog post all the way through the article linked to above, and I have no desire to rehash that which has already been hashed. But what I want to elaborate on is just how the Ports’ obtained this honor, as it was certainly no accident. “Promotion of the Year” is determined through fan voting, and from the start the Ports prepared their fan base to be active in this regard. Images of the bobblebelly were first made available through Facebook and Twitter, and on the evening of the promotion itself a #promooftheyear Twitter hashtag was unveiled on the videoboard. From there onward, the bobblebelly was promoted aggressively through social media as the year’s best.

Art imitates life imitates art: Braden posing with fans on the day of the promotion

In other words, the Ports wanted this from the start. The driving force behind the campaign was director of marketing Jeremy Neisser, who came to Stockton from the Arkansas Travelers. The Travs were runner-up’s in last year’s Promo of the Year voting, with their pre-game “Jose Canseco vs. Local Sexagenarian” boxing match losing to the Birmingham Baron’s annual “Rickwood Classic.” Clearly, Neisser wanted to avoid such a fate this time around.

The lesson here is that, like with anything in else in life, “if you want it, it’s yours for the taking.” And this season, the Ports simply wanted it the most.

And to that I say this: “Thanks for caring!”

"I'd love to have my own bobblebelly one day," says one Ports player to another.

The final thing I’d like to mention about the 2011 Promo of the Year voting was that five of the 10 promotions nominated in the “Giveaway of the Year” category (including the Braden Bobblebelly) were created by NYC-based Coyote Promotions.

That could be a coincidence, but it seems to me that when teams venture into uncharted bobble-waters they are more apt to go with Coyote. And such items, owing in no small part to their originality, are more apt to be nominated for post-season accolades. Agree? Disagree?

And speaking of post-season accolades, this blog is done with ’em. Congrats once again to the Ports’ for emerging victorious, and thanks to everyone who took the time to vote.

My latest (and therefore greatest) Minor League road trip begins tomorrow — cue the anxiety attack! It goes without saying, then, that the blog will be dominated by “on-location” content for quite some time.  But not yet! Today, let’s take our customary look at noteworthy happenings from around the Minors.

We’ll start in Stockton, as the Ports’ held-their much anticipated “Dallas Braden Bobblebelly” giveaway on Saturday. As you’ll recall, the item features the A’s pitcher (and Stockton native) simultaneously expressing his hometown pride and exposing his abdomen.

Needless to say, Ports fans were psyched about this one-of-a-kind giveaway — especially since Braden himself was in attendance.  The line to get into the stadium started forming four hours before game time, quickly growing to epic proportions.

The man himself spent the evening signing the bobblebelly and schmoozing with the fans. 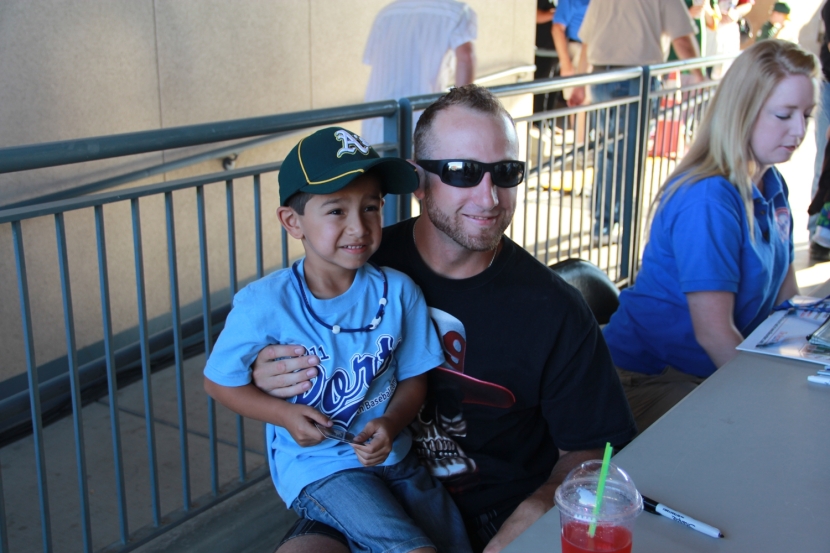 There are still seven weeks left in the season, but the Ports believe that their Bobblebelly giveaway should be MiLB.com’s “Promo of the Year”, and have even launched a #promooftheyear hashtag campaign on Twitter. I’m sure there are plenty of other teams who are going to have something to say about that…

But let’s save that sort of pontificating for later, and instead move across the country to Bowie, MD. The Baysox recently celebrated Festivus, an off-beat December holiday first popularized by an episode of Seinfeld. Communications manager Tom Sedlacek writes that Our Festivus celebration included Festivus poles, Feats of Stregth and the Airing of the Grievances, as well as posters describing the origin of the holiday and its role in pop culture.  The Feats of Strength included arm wrestling with an intern and sumo wrestling, and some Grievances were read over the stadium speakers during the game.

Grievances included “You still haven’t ordered my silverware!”  “Stop snoring so loudly.”  “You never hang out with me, you only play Xbox.” 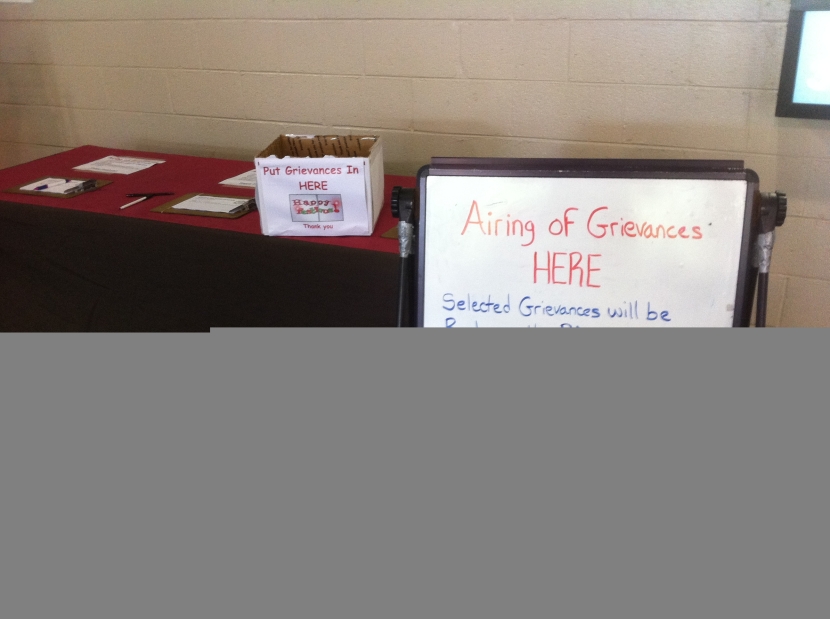 I guess there was a lot of gray area when it came to what constitutes a grievance. 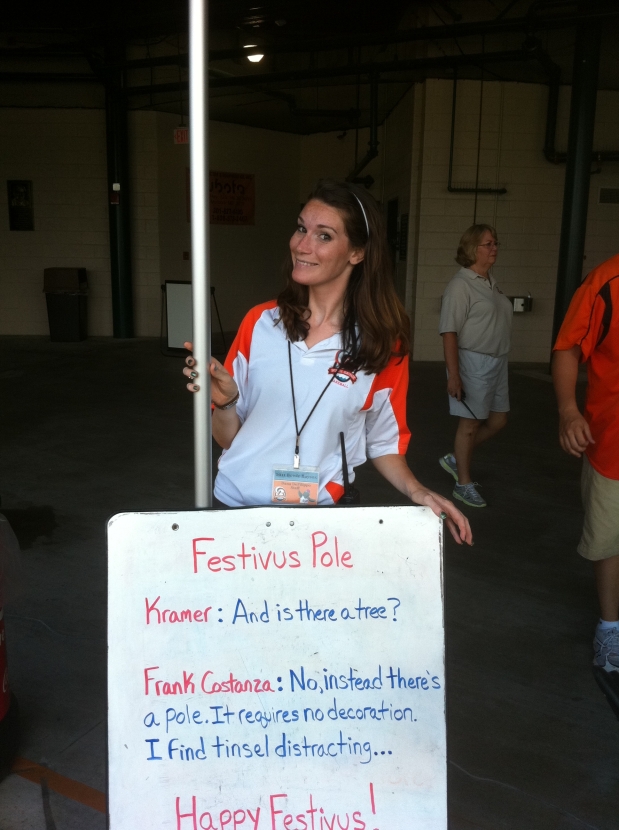 Finally, it’s time for me to feature something that has been sorely lacking on this blog in recent months: centenarians! Last Friday, 101-year-old Freda Sacket joined a local choir in singing the national anthem prior to the evening’s Toledo Mud Hens game. 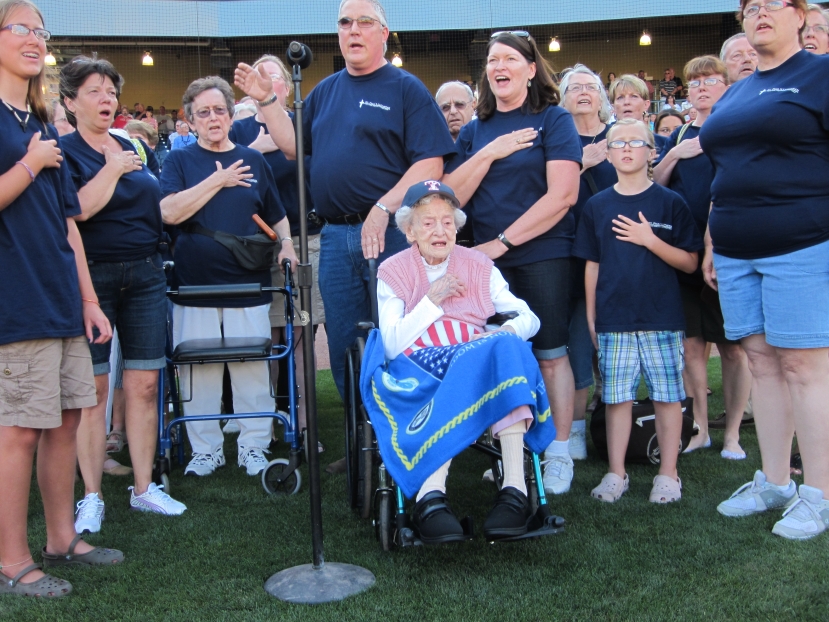 The Spinners’ recent run of attention-getting stunts will surely get some “Promotion of the Year” consideration, as flossing world records and Human Home Runs aren’t the kind of thing you see every day.

Another team likely to be in the running at year’s end are the Stockton Ports, who have produced two of the year’s most creative giveaways: the Jeremy Barfield “Rocket Arm” and the Dallas Braden “Bobble Belly.”

The “Rocket Arm” is a literal-minded tribute to the extreme arm strength displayed by Barfield when he patrolled the outfield in Stockton last season. They will be distributed to the first 1000 fans in attendance at Friday’s game. 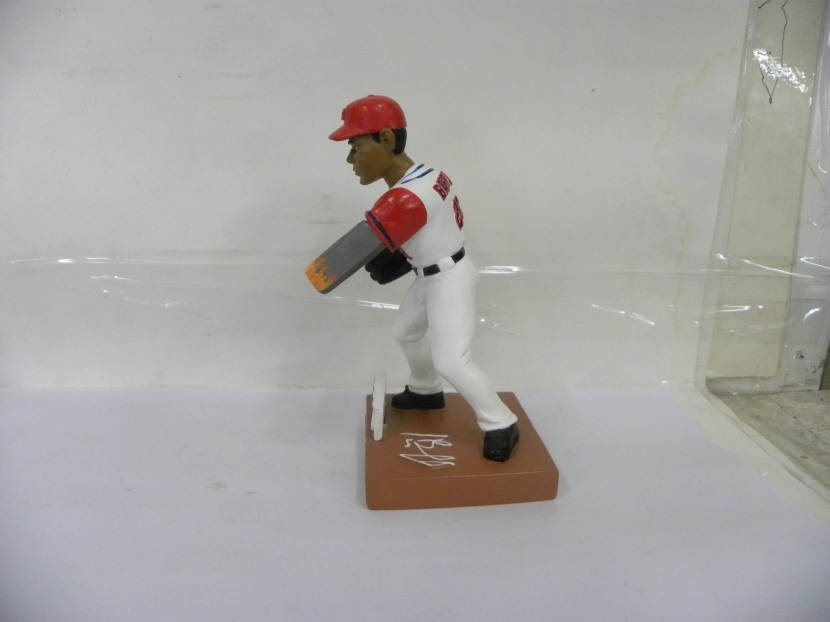 And just nine days later, the team is honoring Stockton native Dallas Braden with his own “Bobblebelly”.

This item pays tribute to Braden’s triumphant 2010 return to Stockton’s Banner Island Ballpark. The team held an on-field ceremony in honor of his Mother’s Day perfect game, during which Braden took the opportunity to display his area code tattoo.

Needless to say, Dallas approves of his Bobblebelly:

And since we’re on the topic of unique giveaway items, I’ll close with a picture of what the Altoona Curve will be giving away tonight: team-logo tighty-whities!

But be careful — improper handling of a curve will result in skid marks.

I was going to forgo doing a blog post today, but my nationwide network of informants will simply not let me rest. Two pictures have recently landed in my inbox that need to be shared immediately, each of which prominently feature tattoos.

The Stockton Ports held a two-day tribute to hometown hero (and team alumnus) Dallas Braden over the weekend, in order to properly honor his recent perfect game accomplishment. Braden took part in a pre-game ceremony on Saturday, during which he proudly lifted his shirt in order to display his undying affinity for Stockton’s area code: 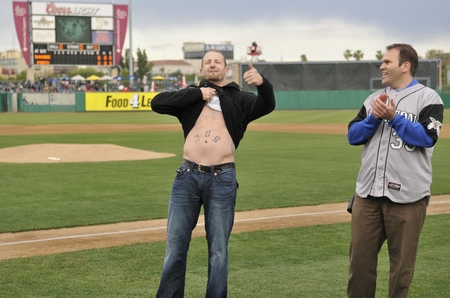 The Ports gave away a commemorative perfect game poster the following afternoon, one which prominently featured “209” despite Braden’s abdomen remaining concealed beneath several layers of restrictive clothing:

A full photo gallery from Braden’s day in Stockton can be viewed HERE, while a video of the pre-game ceremony is HERE.

Meanwhile, in Omaha, a fan participating in an on-field contest during a Royals game was discovered to have one of the most deeply ridiculous tattoos of all time:

(photo by O-Royals asst. GM Rob Crain, thanks to Seamus Gallivan for the heads-up)

As it turns out, the gentleman featured above runs an exceedingly detailed website: TecmoBowl vs. RBI. The site’s homepage includes the following slogan, one that quite easily serves as a metaphor for life: We don’t reminisce like others do, we just keep playing!

Meanwhile, it seems likely that more tattoo brilliance will be seen in Omaha this week: Thursday’s promotion is “Jersey Shore Night.”

But all of the above ties into a larger theme, which is that tattoos are very much in vogue within Minor League Baseball at the moment. The Lancaster JetHawks held a Tattoo Night promotion this past weekend, and the Richmond Flying Squirrels follow suit on June 1.

I would close by saying, “Tat’s All, Folks”, but believe it or not I’ve already used that line.