Last month, I did a post on the Binghamton Mets‘ nightly “Spiedie Race”, in which a Spiedie Sandwich, a Chef, and a bottle of Marinade engage in a race across the ballpark in a battle for costumed character supremacy.

A follow-up post soon occurred, in which “Chef” shared a shocking tale of unprovoked mascot violence.

But even more shocking than this was the fact that, going into the last day of the season, Marinade had yet to win a Spiedie Race. As fans poured into NYSEG Stadium for the B-Mets’ last home game on August 24, they were certain that history was going to be made. That, somehow, someway, Marinade was going to find a way to emerge victorious. This young fan, decked out in a pro-Marinade t-shirt, summed up the the mood at the ballpark: 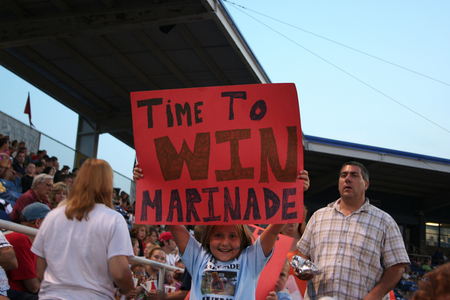 But when the race began, Marinade was nowhere to be found. For reasons that are still shrouded in mystery, he opted out of the contest altogether. Showing a blatant disregard for those who had supported him so unwaveringly throughout the season, he instead went up to the roof in order to best enjoy the beautiful late-summer weather. Here’s a surveillance photo:

But perhaps Marinade had received a tip-off regarding what was to come. For, during the race, an unidentified Mets pitcher donned a pink gorilla suit and ran onto the field. This sole objective of this neon-hued faux-simian was to keep Marinade from winning. But, with Marinade on the rooftop, the gorilla’s presence in the race turned out to be merely a superfluous distraction.

Clearly, there are now more questions than answers regarding this highly unorthodox conclusion to one of the B-Mets’ signature in-game promos. After it all occurred, the disappointment in the stadium was palpable. B-Mets’ director of video production Eric Long reports that “one little boy sobbed to the Marinade afterward, admitting that he had brought
balloons and a trophy to give to the Marinade on what was supposed to finally be
his big day.”

As disappointed as that little boy may have been, hopefully he learned a valuable lesson that day. Namely, that although things don’t always go as planned, hope shall always spring eternal. And when victory finally comes to the Marinade, be it in 2009 or beyond, it shall taste as sweet, spicy, and pungent as the product that he consists of.

Update! The relief pitcher in the pink gorilla suit has been identified. Click here.