In yesterday’s post I focused on the Winter Meetings Trade Show, and in today’s article on MiLB.com I spent some time discussing the Job Fair (among other things).

So, in keeping with a style that has come to characterize the fragmented nature of 21st-century discourse, now it’s time for a mash-up! What follows is a post on people who were looking for jobs at the Trade Show.

First and foremost, yesterday I landed an exclusive interview with YouTube sensation Domingo Ayala. He is the self-proclaimed “#1 Free Agent” of the Winter Meetings. 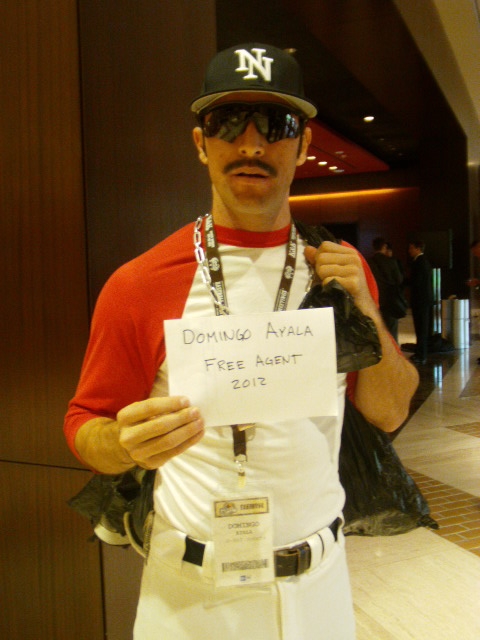 “Multi-year deal is big for me, so maybe 20-25 years and a couple hundred million,” said Ayala. “There’s about 30 teams discussing with me right now.”

Ayala’s stint with the Eugene Emeralds was voted this year’s “Best Celebrity Appearance” on MiLB.com, and Ayala said he’d be amenable to another stop in the Minors to “maybe teach the young guys how to play.”

Baseball superstars of a different sort could be found manning Booth 1101. The vaunted Skillville Group could be found there, whose roster of touring performers includes the Zooperstars, Birdzerk, Myron Noodleman and Breakin’ B-Boy McCoy. 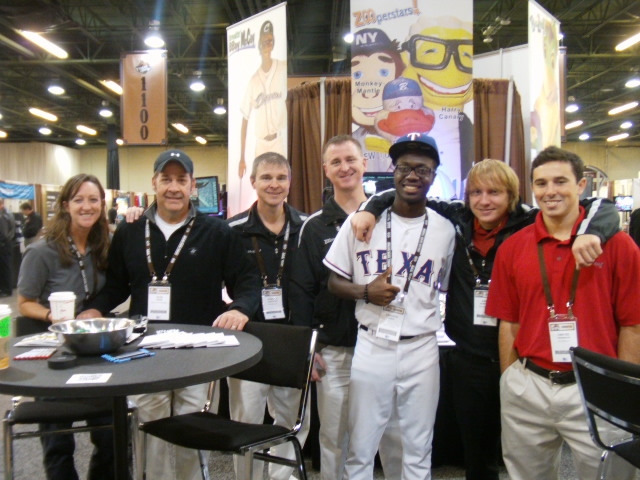 Breakin' B-Boy McCoy is in costume, but can you spot the likes of Myron Noodleman and Harry Canary in this photograph?

The tough economy has resulted in less sponsorship dollars for Minor League teams, which has led to a decrease in touring performers on the schedule. But Skillville impresario (and lead Zooperstar) Dominic Latkovski nonetheless expressed confidence.

“The fans want something above what they’re used to seeing, a national act they don’t see every game and we offer that” he said. “We have a good reputation and always deliver, and feel like we’re the best bet out there.”

Meanwhile, at booth 1404, a new touring act was trying its best to make its presence known: The Fur Circus. Here are three of the primary performers, with an idiotic blogger thrown in for good measure. 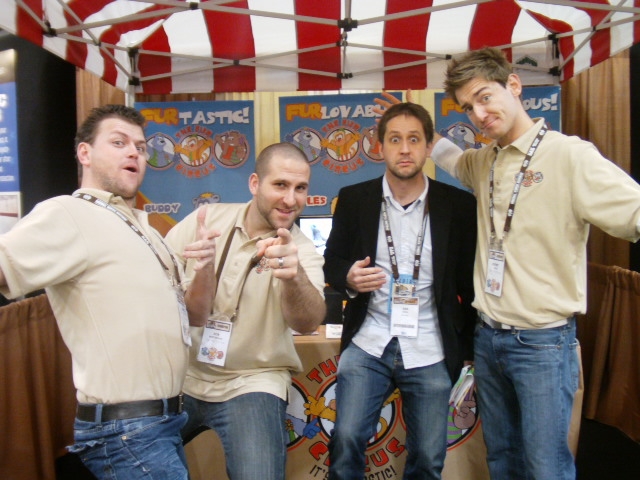 I liked the concept behind Fur Circus, and am looking forward to seeing their show. It was described to me as a “circus gone wrong” as well as a “cross between the Three Stooges and Shrek,” in which a hapless ringmaster increasingly loses control of his subjects throughout course of five in-game acts.

The Fur Circus crew is aware of how difficult it can be to break into the game, and part of their pitch is the extent to which they’ll go above and beyond standard touring act obligations via pre-game media appearances and commitment to fan engagement.

“Pre-game, we’ll let everyone know that the circus is in town,” said Jeremy Legg, one of six performers in the Fur Circus posse. “And post-game, we’ll be there posing for pictures until the last fan leaves.”

An even scrappier post-game touring entity was “The Utility Man” aka Ben Youngerman. This former Trenton Thunder employee didn’t have a booth to his name, instead opting to traverse the corridors in search of a receptive audience. 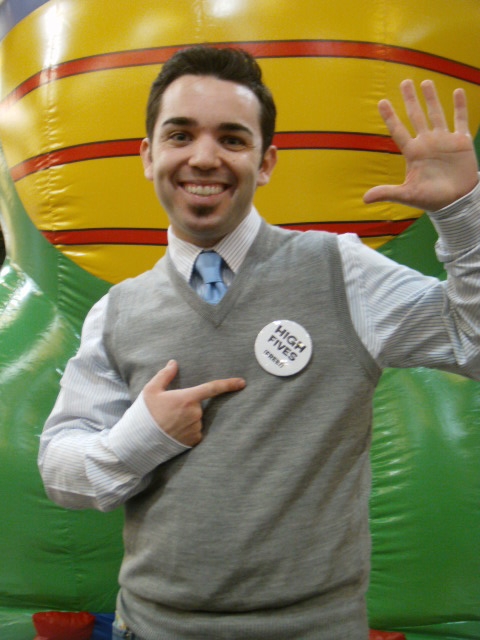 While with the Thunder, Youngerman developed “about a dozen go-to characters,” including the “wacky food vendor” as well as R & B sensation “Benyonce“. He also stresses that he can develop new characters as needed for theme nights and other special events, and specializes in both on-field skits as well as one-on-one fan interaction. Hence, the “Utility Man” moniker.

Youngerman’s operation is a lean one, and as such he says “his price is cheaper” than other touring acts. Whether this results in a plethora of ballpark bookings remains to be seen, but so far his approach has been a good one.

“You’ve just got to throw yourself into the fire,” he said.

That’s a good way to sum up the attitudes of so many here in Dallas, be they job seekers, Trade Show vendors or members of the media. Therefore, I declare this to be the official song of the 2011 Winter Meetings. All hail a true rock legend.

Road Trip content has dominated these virtual pages over the past week and a half, and I’ve still got a few odds and sods to share from my Ohio excursion.

But that can wait. A formidable blog backlog has been brewing in my content cauldron, which is now threatening to boil over. Time to start ladling out the info before it’s too late!

Let’s start with some significant news out of the Pacific Northwest. The Eugene Emeralds opened up the season last week, and highlighting the Opening Day roster was  Domingo Ayala. This ageless superstar is proprietor of the Domingo Baseball Academy and a YouTube sensation, and received a call-up before even playing a game. Still, he made a mark during his brief time in Eugene. 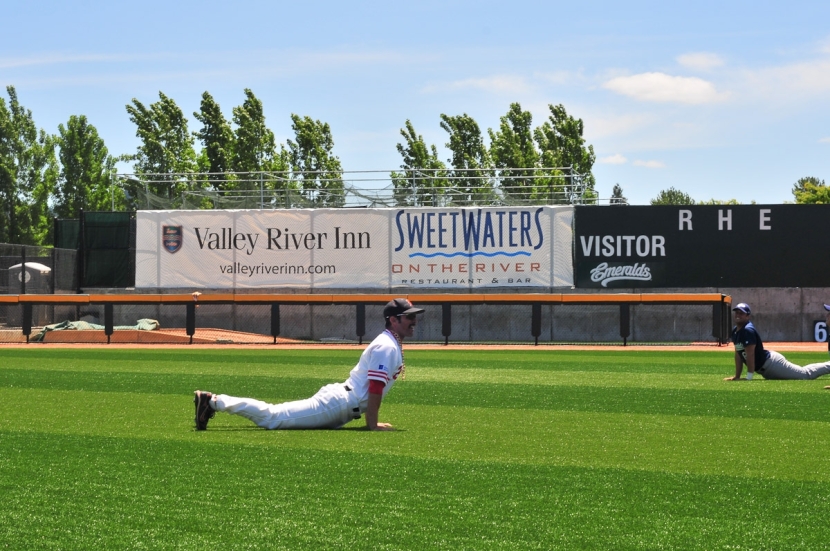 Domingo Ayala’s visit was short and sweet for the Eugene Emeralds. After suiting up for the Emeralds opening night at PK Park, Ayala put on a hitting clinic in batting practice, showing fans why he is the 5-time homerun champion.  This guy can literally do it all. Not only did he throw out the first pitch, but he also had time to sign autographs mid game, take pictures with fans, and even announce the Boise Hawks lineup.

Domingo was very laid back when he heard the news from Ems Manager Pat Murphy that he would be moved up from Rookie Ball. “I thought it maybe be a week or maybe two, but it no surprise me that it happen sooner,” Ayala said. 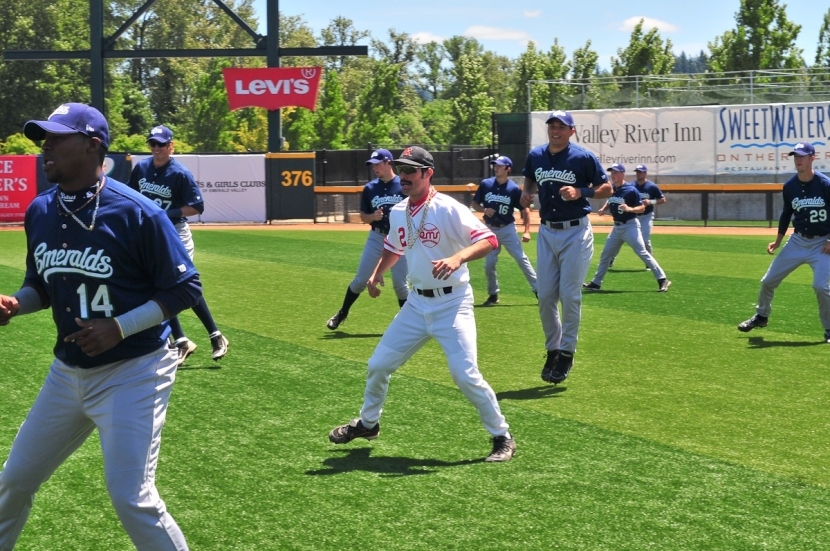 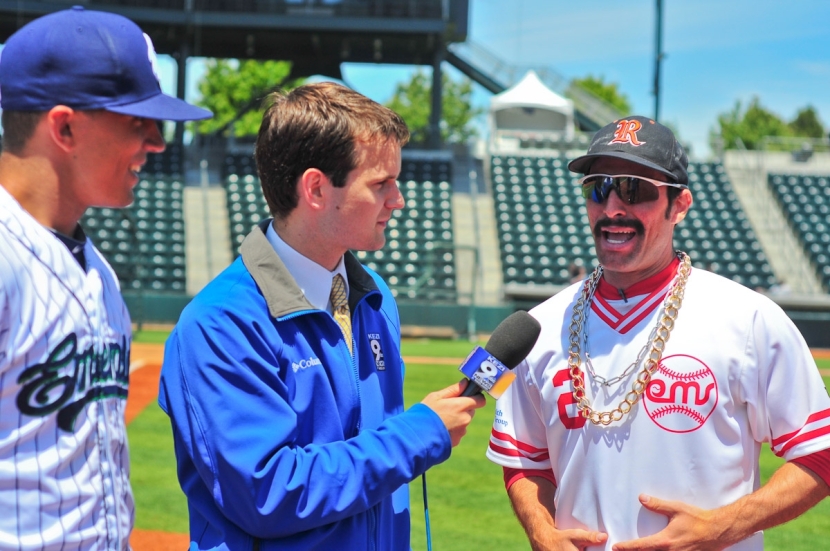 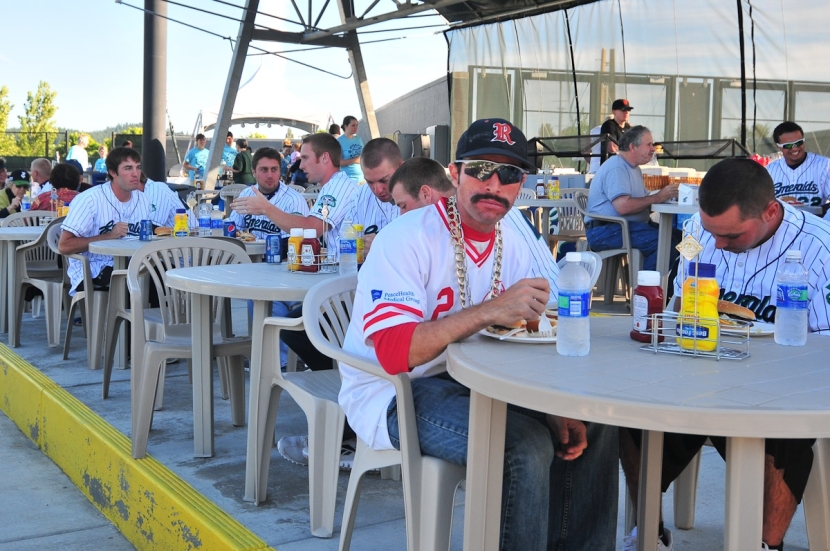 Ayala’s brief appearance captivated the attention of the local media, as evidenced by this story that ran on KEZI News. And with good reason, as this guy is one of the most outsized characters to ever (almost) play in the Northwest League.

And speaking of characters, or in this case the limited use of them, the Lehigh Valley IronPigs paid tribute to Twitter as part of their recent “Social Media Night.” Players wore Twitter-themed jerseys, one of which was signed by the team and auctioned off through the micro-blogging website. Fan tweets were displayed on the videoboard throughout the game, and the elusive “Twitter Bird” was even in attendance. 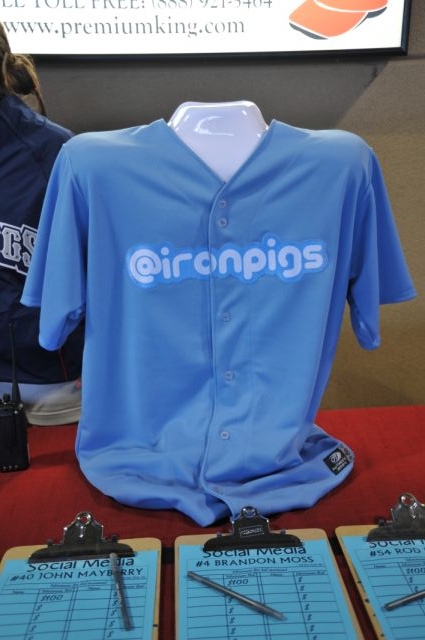 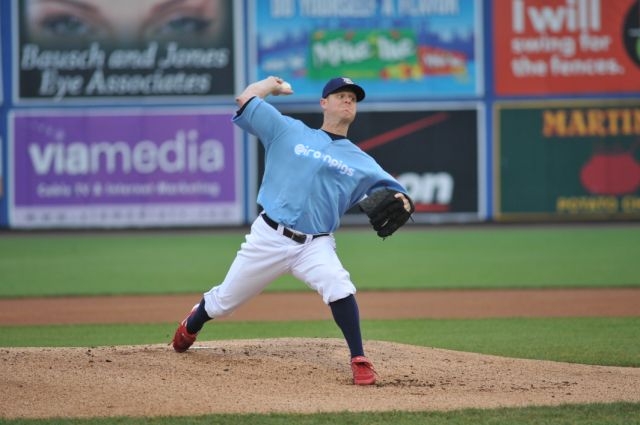 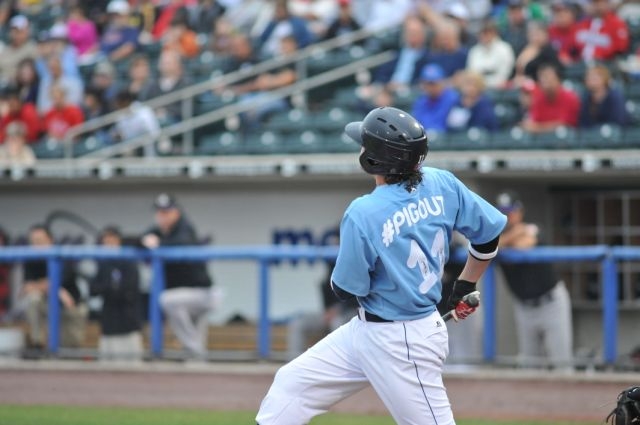 In the next picture #PIGSAFE would have been a more appropriate hashtag. 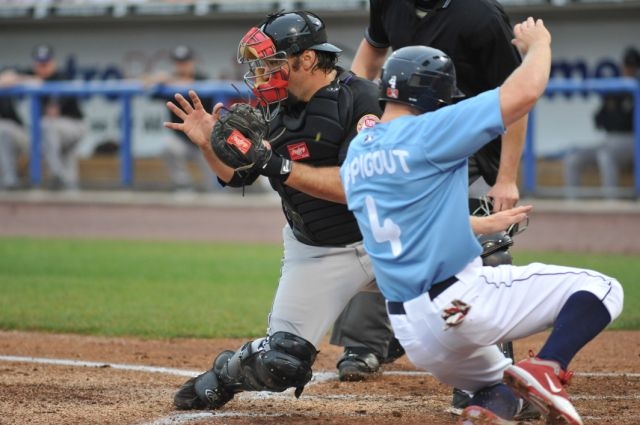 Jerseys were auctioned off after the game, with the winning bidders getting to meet the player who had worn it. 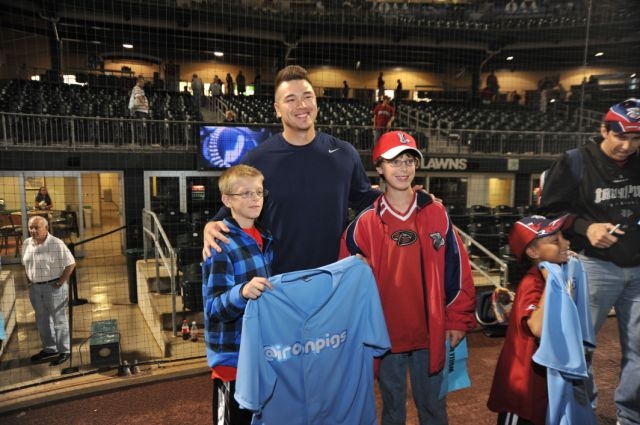 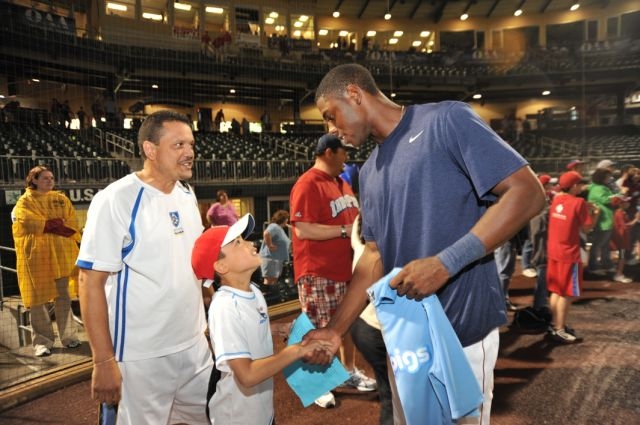 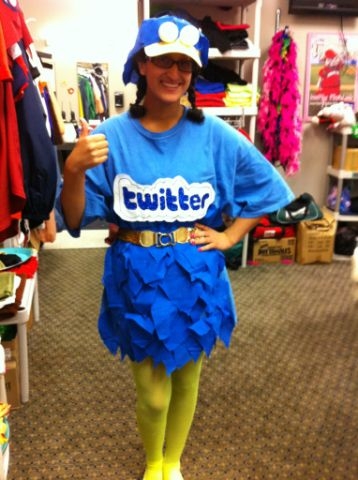 And, wouldn’t you know it? One fan was brave enough to do so. That’s new frankfurter mascot “Colonel Mustard,” barely visible through the fuzz. 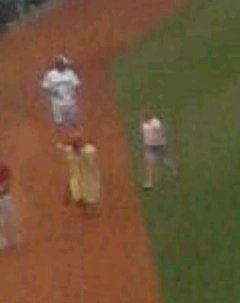 And despite my constant focus on such lowbrow material, I’d like to reiterate once again that I remain committed producing quality articles as well. Please check out this piece on baseball’s longest game, and let me know what you think.