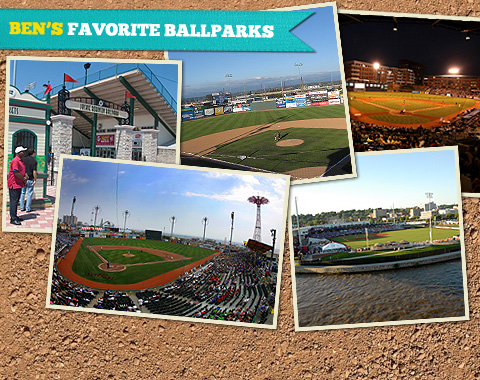 I have “only” visited 77 stadiums over the past four seasons (perhaps a bit more, actually, as some may have been blocked from memory), and of those 77 my Top 10 was as follows:

Durham, Everett, Reading, Daytona, Quad Cities, Brooklyn, Arkansas, Pensacola, Vancouver, and Tulsa. (And, for the record, the five that I had the hardest time leaving off the list were Fort Wayne, Memphis, Vermont, Burlington Iowa, and Lehigh Valley. Oh, and Williamsport! See how hard this is?)

But this is all just one man’s opinion, and I happen to be that man. One of my main objectives in writing the article was to start a conversation and I am happy to report that, for once in my life, I succeeded. It’s easy to see why people responded — ballparks are a subject that Minor League fans are passionate about, and everyone has their own opinions regarding which are their favorite are and why. (And then there are the teams themselves, who passionately advocate for the superiority of their ballpark and react with wounded pride whenever others do not agree.)

All of this is to say — I got a lot of feedback. Some 22 comments were left on the story itself, and dozens more expressed their opinion through email, Facebook and, especially, Twitter.  What follows is a sampling thereof and, when applicable, my response.

I’ve been to 108 of them.  I agree with your set, but Centennial Field in Burlington VT is on my list, as is Coca Cola Park in Allentown PA.  Other great ones worth mentioning: AutoZone Park in Memphis TN,  Peoples Natural Gas Field in Altoona PA. (Michael Nolan)

Over on stadiumjourney.com, we ranked Parkview Field, home of the Fort Wayne TinCaps as the best minor league experience in 2012. You can check out the full review HERE. (Jason Bartel)

Great calls on Durham, Pensacola, and Brooklyn. You downplay Pensacola’s architecture, but it’s sneaky-good – spot-on seating bowl pitch and sightlines, and a wide open concourse for the SRO crowd. Also, Pensacola has some of the best food I’ve had at a minor league park. (Scott Jennings)

I definitely enjoyed the food at Pensacola when I was there. Sea Dog, anyone? (Obviously this is not gluten-free and, obviously, no more Sea Dogs are in my future. Tis better to have loved and lost.) 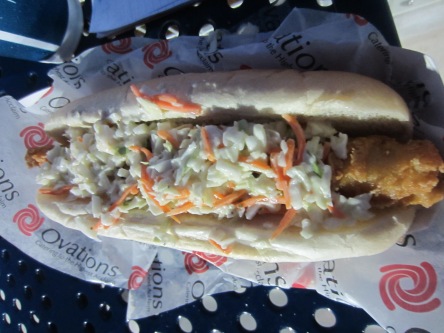 [Harrisburg’s] Metro Bank Park – the one on the island?!  Nothing like it. Come back for another visit, Ben! (Randy Whitaker, who may be a bit biased given that he is the GM of the Harrisburg Senators.)

Real shame not to include Richmond County Ballpark on Staten Island. I dislike Staten Island as much as the next person, but with views of Downtown Manhattan and the Statue of Liberty from the stands, it might the best stadium view in all of sports. (Commenter)

“Commenter” soon received an impolite reply: You must have supersonic eyesight if you can notice the Statue of Liberty from that ballpark when all I see is dirty water.  Your ballpark’s a joke! (TVSBX)

My two cents — I enjoy going to games in Staten Island, and the view of the Manhattan skyline is great, but beyond that there isn’t quite enough going for it to elevate into a Top 10 experience.

@bensbiz zephyr field with all of the New Orleans food. Po Boys, jambalaya, etc. It's 5 o clock all day every day.

Soon after the article was posted I suggested a #BensBizIsWrong hashtag for those who wanted to offer a dissenting opinion, and the GM of the Northwest Arkansas Naturals was quick to weigh in:

Matt and Carolyn traveled to every full-season MiLB ballpark last season, so they know of what they speak:

.@bensbiz, Solid list that could have stretched to 20 or 30 … with Albuquerque, Altoona, Columbus, Portland, Reno, Salt Lake City …

@bensbiz Hard to beat this view at @RaleyField. You're welcome to visit any time! pic.twitter.com/BhccfCZWSW

.@bensbiz Nothing like a summer night at Huntington Park! pic.twitter.com/ikRuzZHdVD

The Fresno Grizzlies sent me a three-part response, here’s the third:

The splendor of Lancaster, CA:

The Memphis Redbirds  are proud to compare AutoZone Park to a mausoleum:

(And, again, for the record: Memphis has a great ballpark and it was difficult for me to leave it off of the list)

Someday I hope to tour the Mexican League, Alejandro!

Meanwhile, the deeply-wounded Fort Wayne TinCaps made their feelings known in blog form:

I cannot be intimidated:

.@bensbiz I hope you don't wake up with a mascot head in your bed. #IronPigs #choosewisely#bensbiziswrong

Okay, I’m only going to include one email response. But it was a real doozy, coming as it did from religious studies professor/uber-accomplished National Anthem singer Joe Price. As you may recall, Price and his wife, Bonnie, toured the country in an RV during the 2011 season. Along the way, he sang the Anthem at over 100 parks. 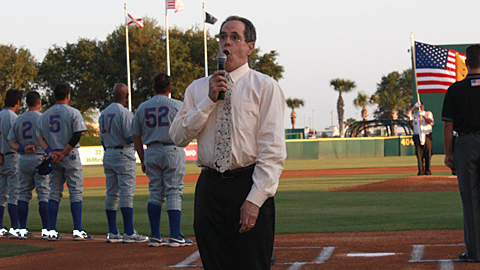 Joe’s email is, in many ways, more instructive and worthwhile than my original article. He writes, in part:

Although few people now inquire about my tour in ’11 unless they’ve sat through one of my presentations, the first two questions almost always have been–“Did you ever forget the words?” and “What was your favorite ballpark?

The former is an easy reply: “No.”  The latter prompts different looks:  “In what respects?”  I retort.  “Architecture, siting, history, interesting game, art, food, fans, promotions, generosity, staff, humor, mascots?”  “Huh,” they grunt as they look at me dazedly.

Still, I do have faves–although I still trying to cull my list and cut it down to 10

Williamsport, with its original, propped, crooked wall behind 3rd.

Pulaski, with its original WPA entry and benchless piers.

Daytona also makes my list for being the field for Robinson’s initial spring training game, and I did enjoy the modest breeze of Savannah’s overhead fans in the grandstands.

But Burlington, VT, with its low-slung ramps, doesn’t make the cut.

Columbus, Ft. Wayne, Frisco, and Billings edge out Louisville and Lehigh Valley and Greensboro, Winston-Salem, and Durham, where the concourses are too narrow for crowded games.

Albuquerque wins, but the best  piece is in Rochester.  Lansing‘s participation in a city-wide art festival also deserves mention.

For natural panorama: Salem (VA) can’t be beat, unless the Big Sky at Helena or the skyscape above the mountains at (now defunct?) Yakima are also taken into account.  Even the sunken bowl on the prairie in Midland, TX deserves mention.

For nearby framing: little can beat the curving rails of the roller coaster mimicking Altoona‘s curve, while the arched span beyond centerfield in Corpus Christi edges out Mississippi River bridge at Quad Cities and the impressive golden halo of the state Capitol’s dome beyond the outfield at Des Moines.

And there are playful features like the pork humor at Lehigh Valley, the painting of Cobb’s career average 366 at that distance in left field at Augusta, or the “nuts free” area in Rochester (which, of course, refers to dietary restrictions rather than to crazy fans).

Children’s areas often featured various inflated jump rooms, but the rapelling rock in Ft. Wayne was attractive, as were the sandbox areas in Wisconsin, where I hope that they checked for renegade rattlers before allowing the children to dig beyond centerfield, and Des Moines’ fountains that enticed kids of many ages.