On the eighth and final stop of my season-opening Florida ballpark road trip, I finally busted out of the confines of the Florida State League. Specifically, I headed north to Jacksonville to see the Suns. This was a significant stop for me. Not only was it the culmination of a fairly grueling road trip, but I have now visited every Minor League ballpark in Florida (the entirety of the 12-team Florida State League as well as Pensacola and Jacksonville). 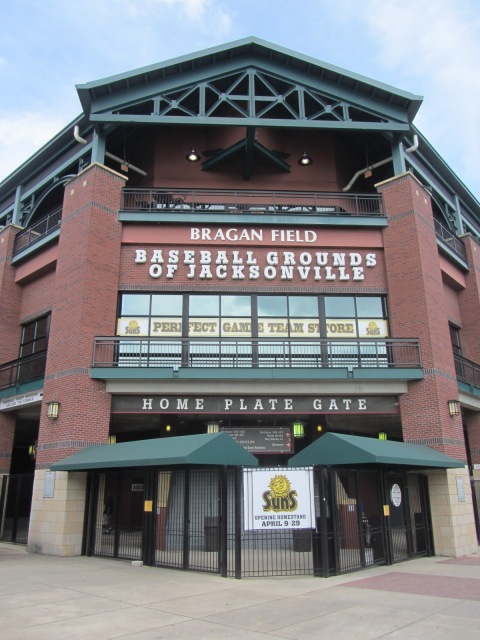 The Suns, Double-A affiliate of the Florida Marlins, have played at the Baseball Grounds of Jacksonville since 2003. But we’ll get to that facility over the next two posts of this series. My afternoon started with a (metaphorical) trip back in time, to a living relic from Jacksonville’s baseball history: J.P. Small Park.

For a little bit of background on this truly historic facility, I refer you to this plaque. 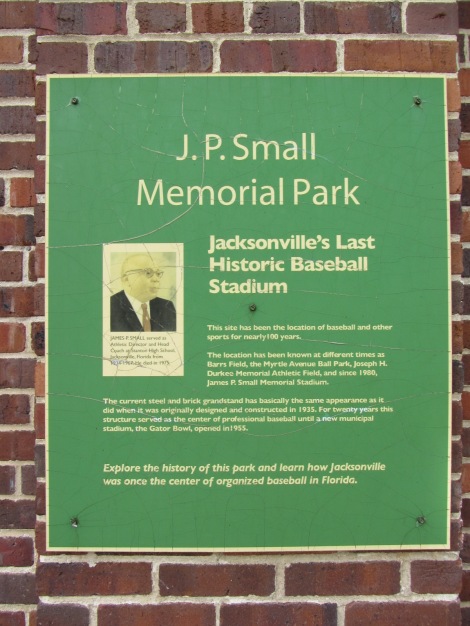 To save your eyes, I’ll type it out:

This site had been the location of baseball and other sports for [over] 100 years.

The current steel and brick grandstand has basically the same appearance as it did when it was originally designed and constructed in 1935. For 20 years this structure served as the center of professional baseball until a new municipal stadium, the Gator Bowl, opened in 1955.

The ballpark is located in Jacksonville’s Durkeeville neighborhood. It was originally constructed in 1912, on land owned by neighborhood namesake Joseph H. Durkee. Between 1914 and 1922 it hosted Spring Training for a variety of Major League clubs (Brooklyn Dodgers, New York Yankees, Pittsburgh Pirates, Philadelphia Athletics). Minor League teams played there intermittently between 1921 and 1961, including the 1953 South Atlantic League Braves. This team, one of the South Atlantic League’s first integrated squads, included Hank Aaron on the roster. Negro League baseball was played here as well, in the form of the Jacksonville Red Caps. 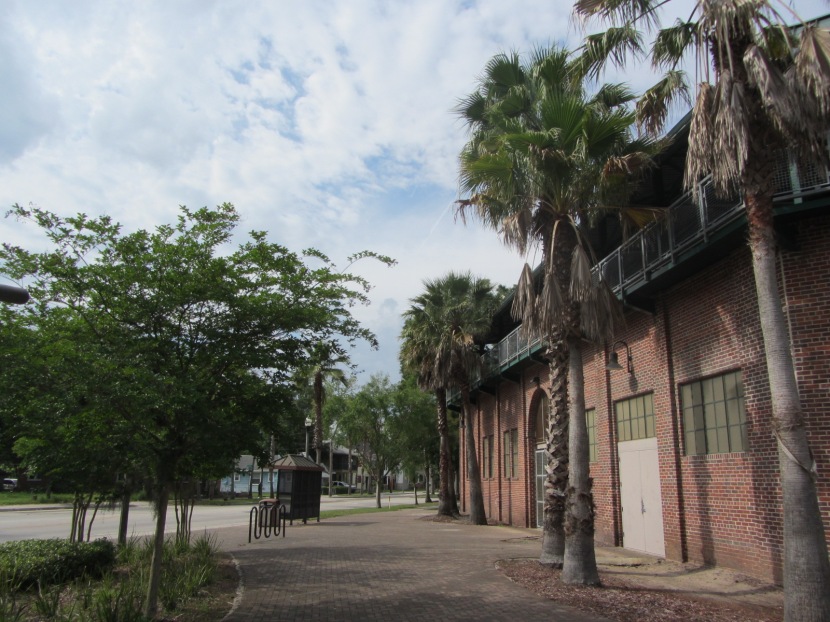 I was driven to the stadium by Suns director of security Rob Schoonover (a 33-year law enforcement veteran) and his wife, Jeanne. The visit to J.P. Small Park was motivated by a desire to simply see the facility, but as luck would have it a game was being played there that afternoon. Trinity Baptist College was in the final stages of an 8-2 victory over Edward Waters. 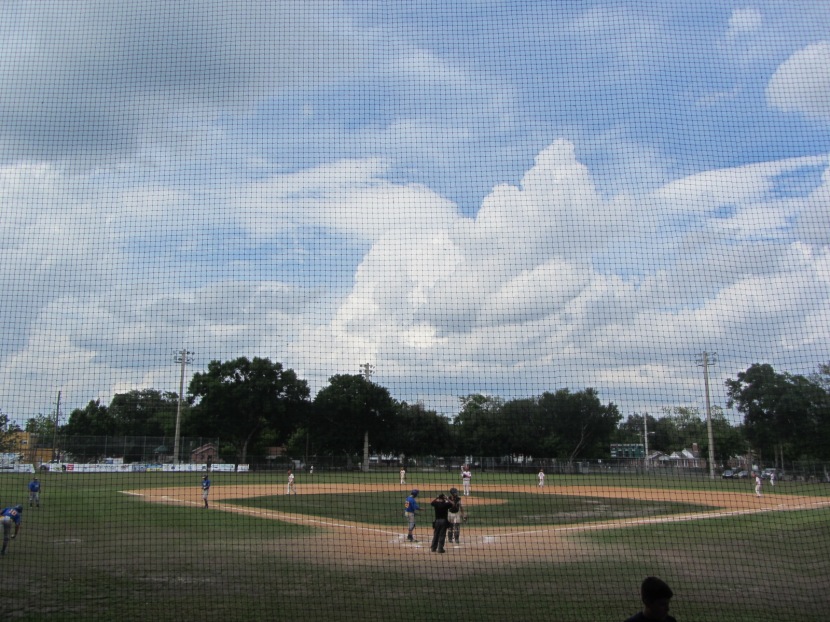 There was game day entertainment and everything.

After the contest concluded, I wandered out on to the field. 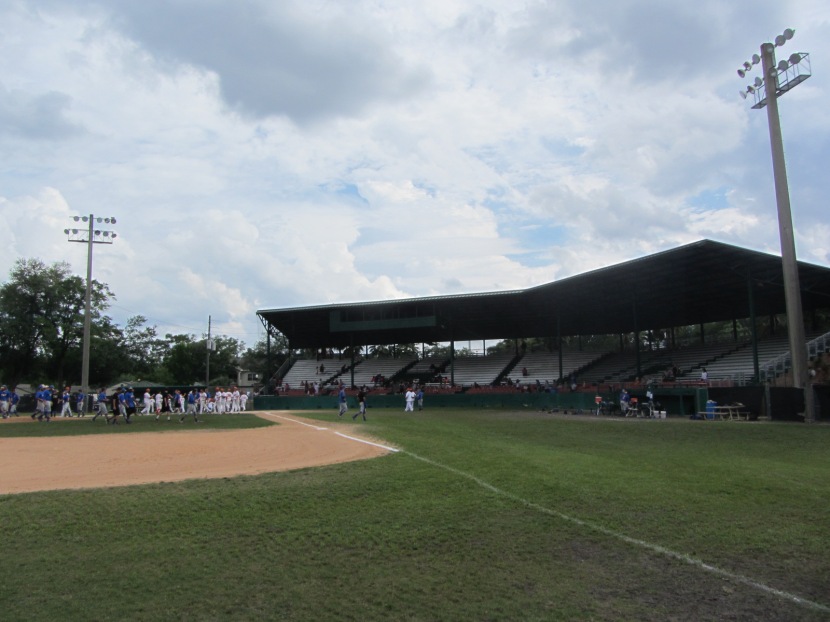 The dugouts are small and muddy, so most of the teams’ baseball equipment ended up scattered about the area.

After the game, Schoonover introduced me to Nick Malpress. He’s been a J.P. Small Ballpark fixture for over 60 years (!)

Malpress worked as a clubhouse assistant for the 1953 Jacksonville Braves, “shining shoes and getting stuff together.”

“Henry Aaron met his wife here,” he told me. “He and Felix Mantilla were coming out of the dressing room and he saw [future wife] Barbara Lucas walking down the sidewalk. It was just one of them things.”

The ballpark’s current dimensions are a quirky 341 to left, 371 to center and 285 to right, but Malpress remembered players “hitting the ball across the street, when there was a wooden fence all the way around. Hurricane Dora tore that fence down, yeah.”

Malpress has gone on to umpire countless high school and college games at J.P. Small Ballpark, and he attends nearly every Jacksonville Suns game held at the Baseball Grounds of Jacksonville. But baseball’s not the only sport he’s involved with, as a Google search of his name reveals that he’s spent two decades on the Jacksonville Jaguars “Chain Crew.” He’s a Jacksonville sports icon.

Okay, it’s time for me to move the chains. This post is is the first down; stay tuned for two more, live and direct from the Baseball Grounds of Jacksonville.

This quick afternoon detour to J.P. Small Ballpark was an enjoyable one. 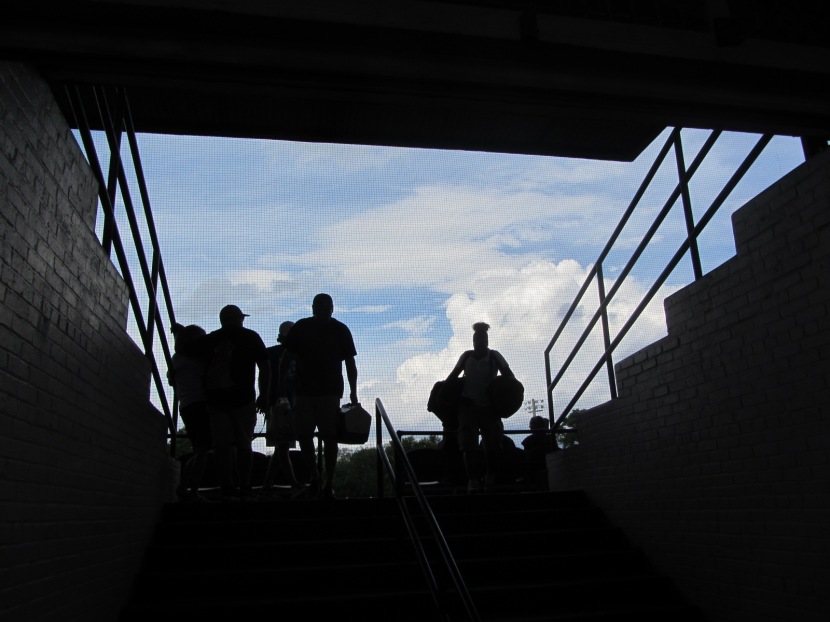